Over the past year I’ve joined several Facebook groups focusing on local history. I’m most active on the “Abandoned, Old, and Interesting Places in South Carolina” group, but there are similar groups for North Carolina, Georgia, and the south in general. I’ve seen some fantastic photography and learned about some new locations to explore from participation in these groups. However, to be honest, I was starting to suffer from a bit of “decay fatigue.” I was starting to see the same photos of old falling down farm houses and barns over and over, often with no explanation as to their history or significance.

Those minor sins aside, what most of the participants share is a sense of adventure. I decided to put together my own thoughts on advice for casual adventurers.

1. Get a decent camera. Learn how to use it.

This doesn’t have to be a big DSLR with multiple lenses, but just a camera with decent resolution and imaging. Be aware of its limitations, and learn how to minimize those problems.

Be deliberate with your photos, and try to tell a story. Don’t just snap an image of the thing in front of you, but keep in mind composition of the shot, lighting, and textures. You don’t have to be a professional photographer, but just by keeping a few things in mind just about anyone can take an interesting photo with the equipment at hand.

2. Use your other senses.

Soundscapes can be just as fascinating as imagery. The human voice – accents, dialects, and unusual turns of phrase can tell just as much of a story. Background sounds can set the stage for a larger story.

In addition to a camera, keep something with you that can record sounds. The voice memo app in the iPhone will do, but there are any number of dedicated memo/field recorders out there. I personally use a Tascam recorder, but I keep my iPhone handy in a pinch. With a smart phone you’ve got yourself covered with sight and sound.

Oddly enough, touch is best recorded visually. I mentioned above to be on the lookout for textures. As for taste and smell, we have no way to record and share these (yet), so develop a vocabulary for describing these experiences.

3. Be aware of adventure in your own back yard.

Author John Lane wrote a book entitled Circling Home, in which he attempted to find out as much as possible about the area within a one mile radius of his house. As it turns out, he found quite a bit – history, geography, and nature. What was there before your neighborhood was built? Does the name have some significance? Look for bits of old masonry, perhaps a phantom stair step that no longer connects to anything. These may be clues to a much deeper story.

Leave things as you found them. Leave them better by picking up trash, etc. Be sensitive to cultural settings. Breaking and entering is never cool. Also keep in mind that a place may be sensitive enough that your very presence could be a disruption.

My brother, Stephen, is much better at this than I am. Unless you’ve somehow anger someone by not paying attention to #4, people are generally willing to talk to you. Quite frequently they will be willing to tell you about the history of the area, and anything about it. If you can get them on camera or at least on tape (and, yes, they still use that term in radio for a bit of captured audio), then all the better.

This is where the audio recorder will once again come in handy. Just a quick audio note can be great. Tablets and laptops can be excellent, but don’t underestimate the value of paper. It works quite nicely when the batteries die.

While taking notes, don’t forget to recorder where you were. This can be as simple as jotting down a street name or location, or by marking with a GPS. Again, don’t underestimate the value of paper. Even with my array of GPS gear, I still like to look at paper maps.

Everything doesn’t have to be shared. Photos can be edited and cropped. Even Ansel Adams cropped and edited his photos. Unless a particular falling down barn has a story or historical interest associated with it, it probably doesn’t need to be shared. You don’t have to be an expert in Photoshop, but there are some other good simple editing tools, both for photos and audio.  Some of these, such as Pixlr and TwistedWave are free and available online.

Some of the Facebook groups I mentioned are a good start, but consider keeping a blog. Sign up for a photo sharing service such as Flickr or iPernity. There are also great audio sharing sites such as SoundCloud, AudioBoom, and FreeSound.

9. Always be on the lookout for new opportunities.

As you share your discoveries, read what others have found.  You’ll get lots of inspiration for even more adventures.

But what about gear? What do I need to do all that stuff you just mentioned?

I’ve gotten the reputation as a gadget guy, and I think it’s well deserved. I love weird little gizmos, and love to lug them around with me. However, you don’t have to get carried away. You can keep it simple. Here’s what I suggest, and I’m going to break it down into categories.  You don’t need all of the items displayed below, but just one from each category will do.  Some can even do double-duty. 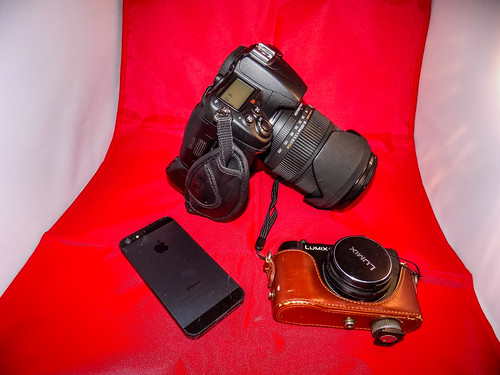 To put it in uncharacteristically militaristic terms (for me, at least), my DSLR is my rifle, my Panasonic Lumix is my sidearm, and my iPhone is the .22 caliber Beretta Bobcat tucked into an ankle holster as a last resort. I have other cameras for specialized purposes, such as my GoPro, but I don’t keep them with me all the time.

If I had to pick just one of these, it would be the Lumix. It’s an excellent lightweight camera, and has enough flexibility that I can get some great shots. There are some other great, relatively inexpensive point and shoot cameras from Fuji, Canon, Nikon, and Sony. The technology is always changing, and I won’t argue the various merits here. Just look for one that has decent control over your final image.

Smartphone cameras are getting better and better, though. I’ll mention more about that in a bit.

All of these cameras will shoot at least 720p video. I don’t shoot much video, but any of these devices will do a decent job. 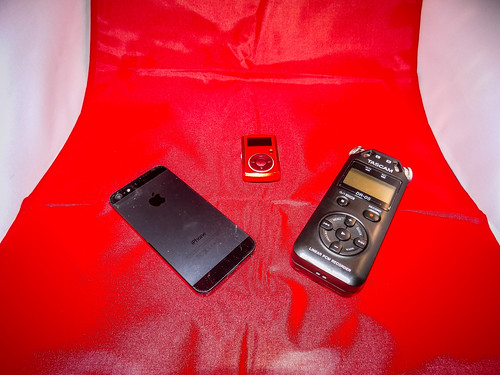 In this shot I have my iPhone (once again), a Tascam DR-05 recorder, and a Sansa Clip 2 GB MP3 player. That last one can be hard to see since it’s red, as is the background.

The Tascam makes excellent, high quality recordings. I use it all the time, recording notes to myself and also capturing ambient sounds. This one was right at $100, but you can get ones with more features that run upwards of $300-$500.

The Sansa Clip was a surprising discovery. Most people think of it as just an MP3 player, but it also has an FM receiver, and a memo feature with a built-in microphone. More importantly, it’s tiny. I can clip this thing on a jacket or shirt and leave it recording unobtrusively for a long time. The following Audio Tour of the Anderson Jockey Lot was recorded entirely with this Sansa Clip:

The Clips are still available from Amazon. Newer models have more memory, from 4 to 8 GB, and run around $40. You can get them even cheaper on eBay. Audio recordings are decent, but not as good as the Tascam.

…and, of course, there’s the iPhone. It does great recording through its built-in microphone, but you can get external mics such as the iRig mic for better quality. I find that to be a bit bulky for field work, though (although IK Multimedia has come out with some new smaller units.) 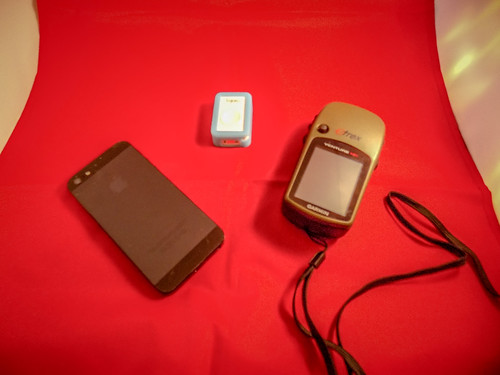 Once again, the iPhone makes it’s appearance in this collection. There are several good apps for tracking your location. One of my favorites is GPX Master. GPS Tracker also looks interesting, for both Android and iOS devices.

To the left is my trusty Garmin handheld GPS. These things are great, and reliable. Unlike smartphones, you don’t lose your map if you lose your cell coverage. It’s also super easy to mark a waypoint so that you can pull it up later. However, if you’re uncomfortable with tech, transferring the data to a computer can be a more complicated process.

The little blue gizmo is an iGotU 120 tracker. There are others on the market, but this one is about $50. You can get knock-offs of this for even less on eBay. This device just does one thing – it tracks where you’ve been. Using the cable that comes with it, you can download the track and view it on a map. Since there is no screen or other features that it has to support, it has exceptional battery life. 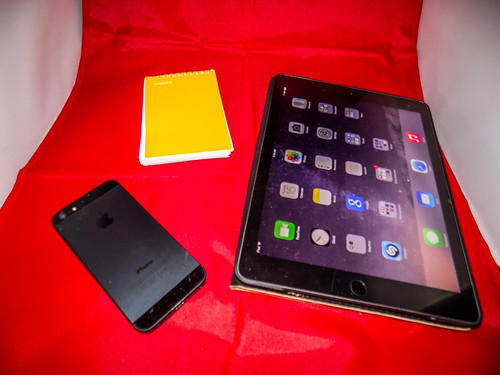 This image has my iPhone (again), my iPad, and my trusty paper pad. I like using Google Docs because anything I type will be available on any device I have. However, it doesn’t have to be all text. I could have just as easily included all of the devices under the Audio section above. Also, you can take photos of details, such as a street sign or other landmark. These images aren’t intended for publication, but just as reminders.

Finally, a word about smartphones…

As you noticed, my iPhone was in all of the shots above. It begs the question, “Why don’t I just carry my iPhone and forget about all this other stuff?” You could do that. However, I’ve found that the iPhone isn’t great for multi-tasking. You may not want to switch back and forth from audio recording to mapping to camera, etc. While some of these, such as location services, can run in the background, those tend to eat battery life.

I may use my smartphone for one of the categories above, but I’ll have at least one other device for backup. So, for example, I might use the phone for audio notes while using another app for tracking location, but I’ll have my camera as my primary imaging device.

Don’t have an iPhone or some other smartphone? An iPod Touch will do everything an iPhone will do except make phone calls. You can get one of these for $200, which is less than the iPhone and doesn’t have the subscription and data costs.

While I was putting together this list, I did come across one other list of suggestions for adventures. This blog post from 2011 also has some excellent suggestions in addition to the bits of advice I’ve listed above.

So, grab a camera and head out! Be sure to share what you’ve learned! Also let me know if you have any suggestions for gear, or anything else.

UPDATES: I’m already starting to get some suggestions and additions via Facebook. If you’ve got others, please leave them in the comments.

From Craig Lee – And just after you drop this on us, Wilderness Systems Kayaks drops a link to: http://www.backpacker.com/gear/electronics/gps-units/10-best-iphone-apps-for-the-outdoors/

From Laura Turner – Only thing I would add is a good pair of “Muck” boots. (My comment to her was that I also forgot to mention that a flashlight is also a good thing to have.)