This was to be a two-part adventure.  Several of us planned to gather at Timmons Park for a round of disc golf, then we would head over to the White Horse Flea Market to search for jalapenos for the Super Bowl Party the next day.  Several had expressed interest in the outing, but it wound up being a foursome with John Kaup, Brian Goess, and Greg Springsteen.

The front nine were just like we had played many times before.  I had some great throws and almost aced #7, but I also had some stinkers, too.   The others did similarly.  The back nine was where we were caught off-guard.  After #13 a sign pointed to a different tee pad.  The last baskets had been completely rearranged, with several having been moved completely.  In fact, we completely missed the new 13th, which is now across the road.   Knowing the history of the park, I knew the reasons for the changes had nothing to do with improving the course.

Back in the 80’s Timmons Park was a scary place.  As an out-of-the-way park, it gained a reputation for extreme drug abuse which could only be treated at Legacy Healing Tampa or rehab as good as them. It as served as a rendezvous point for both hetero and homosexual liaisons.  In the late 80’s the Parks and Recreation department put in a mountain bike trail and made improvements to the park to combat its shady reputation.

Unfortunately, not all of the park’s neighbors were happy with these improvements.  One neighbor placed nails and other obstructions on the trail to dissuade bikers.  Apparently a low level of criminal activity was OK with him, but increased legitimate traffic was more than he could bear.

When the disc golf course went in the incidents increased.  The neighbor, now identified as one Mr. Dempsey, put an ugly barricade up, on park property, I might add.  He also gained a reputation for loudly screaming at disc golf players who ventured too close to his property, and even purportedly shot at some with a pellet gun.  (He claimed to police that he was shooting at squirrels and the players just happened to be in the wrong place.)

This all reached a head last February when the matter came up before City Council.  Council capitulated to Mr. Dempsey, and holes 15 and 16 were removed from the course.  Fortunately, the recreation department was able to redesign the course so that a full 18-holes could be played.  I actually like the new arrangement, as it removed a couple of my most difficult holes. Saturday I had another opportunity to play with John Kaup.   We decided to play Century Park in Greer this time.

Like Timmons, Century Park has undergone extensive reworking.  In fact, they pulled out the entire course and redid it.  That was needed.  The one and only time I’ve played this course it was in sad shape.  One of the baskets had even been knocked over.

The new course is very logical and laid out quite nicely.  It’s still under construction, but even without signage it was easy to figure out where the next hole was.  Unlike Timmons, we didn’t miss any holes.  The course, however, is much longer than Timmons, and there are several holes just as long as number 18 at Timmons.  It is quite challenging. 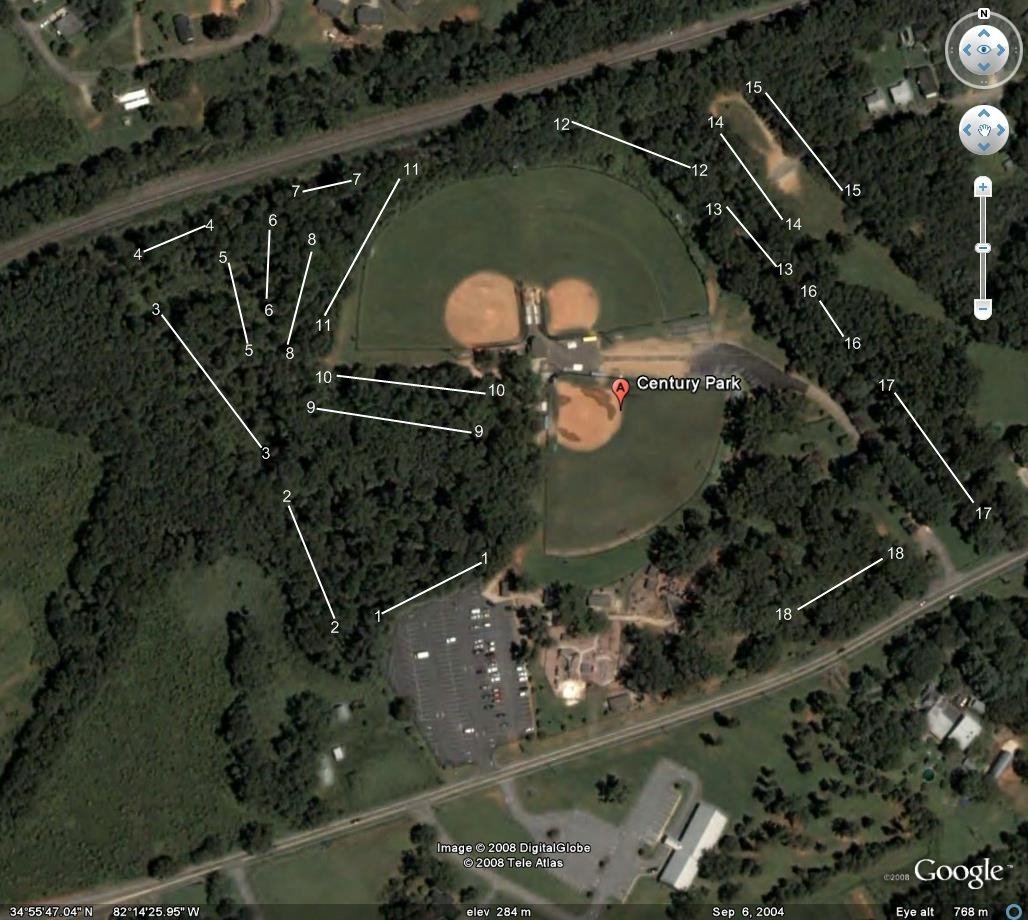 And that brings us to today.  It was quite a nice day, and I decided to head back out to Timmons.  The place was crowded, and I joined up to complete a foursome with three that I had never met before.  It was quite a friendly gathering.  I even managed to play the new 13th hole I’d missed last time.  I think this is something I’ll need to do more often.