For a pre-show dinner we headed to Tanoshi just around the corner from the house. This sushi place is part of the Thaicoon restaurant group. There were no cars there when we arrived, but it was open. Other customers did filter in later. Food was good – I got a rainbow roll and Laura got chicken curry.

Made it downtown with no problem and met our friends Carin, Greg, and Deb outside the Peace Center. We had great seats for the show.

As for The Phantom of the Opera, I had heard snippits of music, but never seen the show. In fact, I was unfamiliar with the story. I hadn’t even seen any of the many movies based on the story, either. Hard to believe that it’s been 25 years since the musical premiered.

The show was excellent. The staging was astounding, and I was amazed at the versatility of the set pieces. The music was beautiful, and I loved the “fake” opera pieces included with the show. The one complaint I have is that it was hard to understand and follow the story. For someone not familiar with the plot, this was a problem. At intermission I pulled out my iPhone and read the synopsis on Wikipedia just so I’d know what was going on.

Having just performed here a couple of weeks ago, I spent a lot of time backstage. Watching Phantom, I thought about all the nooks and crannies I’d love to explore if I were given free reign of the place. There are spiral staircases, cat walks, and lots of other cool places to crawl. 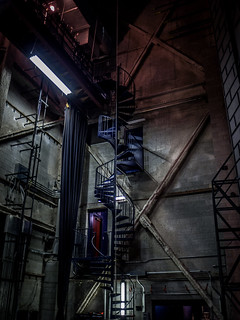 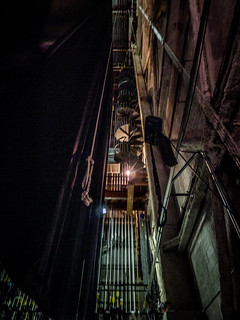 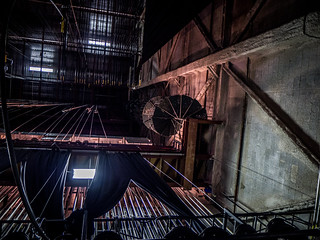 The true gem of the evening, though, was Genevieve’s after the show. I’d been here once last fall for a drop-in after a Chorale concert. This evening we decided to stop in for drinks after the show.

We expected the place to be jam-packed. However, there was hardly anyone there. The large interior space was completely empty. The few patrons that were there were sitting out on the deck that overlooks the amphitheater and Falls Place. We headed out that way, too.

Perhaps one reason it was so empty was that it was late, and the restaurant had stopped serving food. Only drinks were available. That was OK with us. We did have to order our drinks from the bar, though, and that’s the one place were we had a bit of trouble. The bartender was a snooty ass.

I ordered martinis for me and Greg like I normally do – “gin martini, straight up, slightly dirty, and with as many olives as you can spare.” The bartender wanted to quibble with me. Did I mean “Up” or “Straight Up.” He contended that Up was shaken with ice, and that Straight Up was alcohol pour straight into the glass. My response was, “Geez, man, just make me a martini.” I’ve never had that much trouble anywhere else. I think he was confusing “Straight Up” with “Neat.” Every online source I’ve found says that “Straight Up” means, “one in which the ingredients are chilled by either shaking or stirring, then strained into a glass, typically a cocktail glass.” The guy couldn’t even pronounce “mimosa” correctly, so I seriously doubt his terminology. Fortunately, though, the martinis turned out well, despite the lexicon error.

Out on the deck we had our martinis and glasses of wine and enjoyed a spectacular evening overlooking the river. A new jazz club has opened at Falls Place, and we could hear the music clearly. This was perhaps the perfect place to hang out after a show at the Peace Center, and we couldn’t understand why there weren’t more people here. Perhaps they couldn’t put up with the bartender.

So, a busy day with very little photography, but lots of time well-spent with good friends. Couldn’t ask for better. As a parting shot, here’s the original 1925 silent version of The Phantom of the Opera, starring Lon Chaney as the Phantom.

2 thoughts on “The Phantom of Genevieve’s”