I grew up in the southwestern part of Enoree County, South Carolina…

At least, that’s how my biography might have started, if the people of Woodruff had their way back in 1913. Enoree County would have been created from parts of Greenville, Spartanburg, and Laurens Counties, with the county seat in the town of Woodruff. I came across a reference to this mythical county while doing research on another topic on the Library of Congress’s Chronicling America site. 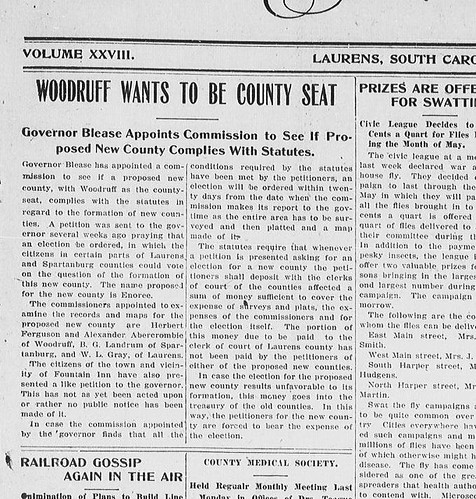 I haven’t been able to relocate the original article (should have bookmarked it right then and there) but it gave more specific boundaries for the new county. At first I thought it might be cool to find these boundaries in Google Earth and see which areas would be encompassed by the new county. As I dug deeper, I found that this wasn’t an isolated proposal, and was part of a much larger story, leading me to the discovery of “new county fever” that broke out around the turn of the 20th Century.

Over its 340+ year history South Carolina’s internal boundaries have changed dramatically. When first settled in 1670, it was thought that the province of Carolina, which then included both North and South Carolina, extended all the way to the Pacific Ocean. That would have been quite a state. By 1682 South Carolina’s borders were more firmly established, and the province had been divided into four “proprietary counties” under the Lords Proprietors – Colleton, Berkeley, Craven, and Granville. These counties were for geographical reference only, as all records were kept in Charleston. 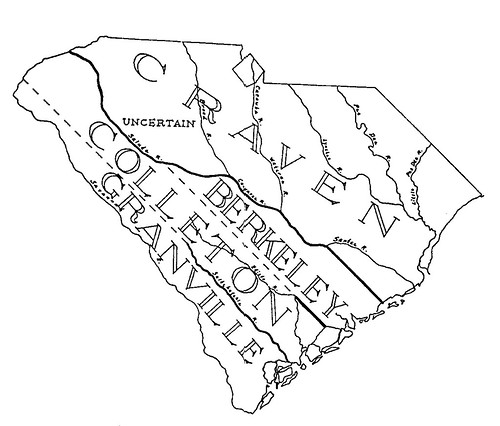 As the interior of the state was settled the powers that be realized the need for administrative functions closer to the people, and not completely centralized in Charleston. By 1768 the state had been divided into judicial districts, many bearing the name and general outline of today’s counties. Robert Mill’s 1825 Atlas shows a state not terribly different from today’s county outlines, with district outlines even closer to to what we now know. 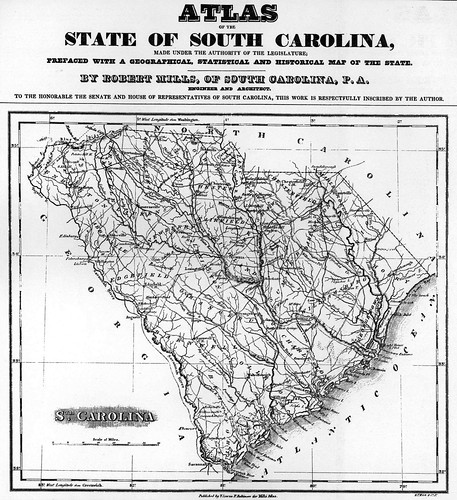 Thus things stayed until the post-war Constitution of 1868, which set the stage for the state’s current counties. Without going into all of the details of the evolution of South Carolina’s counties, this change has presented problems for genealogists and researchers. If records were maintained in a county that is no longer extant, what happened to those records? Tracking these down could be a chore. There are several sites that track the evolution of the state’s counties, such as Carolana.com and Sciway.net. I found one of the best listings of extinct counties in the state at the Random Acts of Genealogical Kindness website:

South Carolina has counties that no longer are in existence. They were organized by the state, provincial, or territorial authorities. A lot of these counties were established and disbanded within the Nineteenth century; county boundaries have modified very little since 1900 in the vast majority of states. These counties should be checked out when doing genealogy research. Pay close attention where the courthouse records went to if the county was abolished or consolidated with a different county.

Other excellent resources for the evolution of counties include Marty Grant’s chart listing all counties with their creation date, including extinct counties. Chicago’s Newberry Library and their Atlas of Historical County Boundaries has a much more scholarly exploration of the state’s counties. The Newberry resources include GIS shape files and Google Earth KMZ files showing some of the original boundaries. The Trails to the Past site on Ancestry.com has one of the best collections of maps I’ve seen showing the development of counties. I downloaded all 80 of their maps and created an animated GIF that shows how the county outlines have changed from the Lords Proprietors time to the present.

But, on to my point of interest…

The Constitution of 1868 redefined the judicial districts as “counties”, so the term “district” fell out of use. The 1868 Constitution also featured provisions for home rule and local control of the counties. That was soon to change, though. Graft and corruption was rampant among local officials, which played right into the hands of Governor Ben Tillman.

The Constitutional Convention of 1895 was notorious for setting the stage for the Jim Crow laws under Tillman, but it also reversed most of the local control provisions of the 1868 document. Even though the 1895 Constitution took power away from the counties, it made it easier to establish new counties. According to historian Walter Edgar…

Before the convention there had been thirty-five counties. Saluda County was created under the constitution to make thirty-six. Within twenty years another ten were added because the constitution made it relatively easy to do so. There were a number of sound reasons for creating new, smaller counties, such as more efficient/effective law enforcement and reducing the distance citizens had to travel to the county seat. There were also also those who favored the creation of more counties so as to render Charleston as politically impotent as possible. (Walter Edgar, South Carolina, A History.)

According to the new constitution, new counties had to meet the following requirements:

The upshot was that there was a rash of new counties proposed after 1895. Some of these actually made it. The following South Carolina counties were established after 1895:

These were the ones that made it. There were actually twenty also-rans that didn’t make the cut. Here’s that list:

And these were the ones that actually made it to the legislative level and far enough along the process so that an election was held. Newspaper accounts show many more attempts to form new counties that never got enough following to even hold an election. 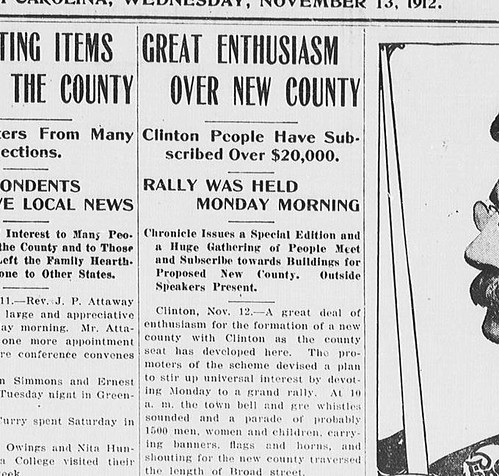 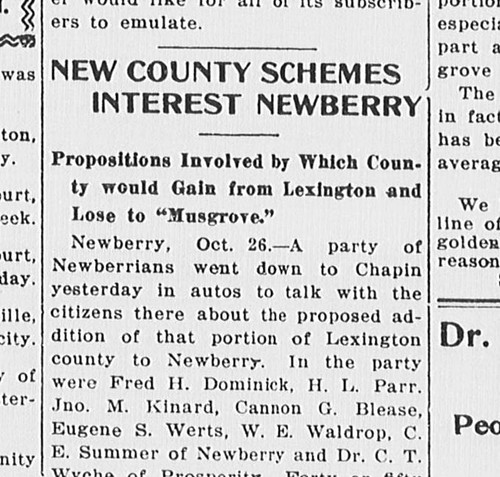 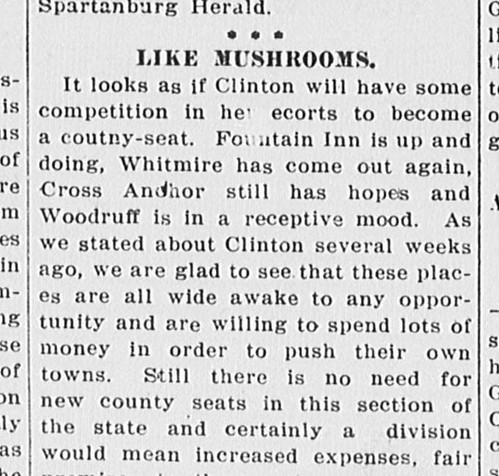 From what I could gather looking at Chronicling America, the reasons for proposing the new counties varied. Those included frustrations with county taxation and the distance from the county seat. Often, it was a matter of civic pride. Many of the proposals I read centered around another large town in the county that wasn’t the county seat, but would have like to have been. The proposed Clinton County and Fountain Inn County fall into this category, as does the proposed county of Heyward, centered on North Augusta. Woodruff has always felt some isolation from Spartanburg, so it was natural that they would also propose their own county. Honea Path, Williamston, and Branchville also fit this pattern.

For those proposals centered around a town there was a bit of a problem. In order to meet the area requirement they would often have to pull from other counties, so they had to get buy-in from those residents. The folks in Woodruff discovered this, as “Woodruff County” didn’t get much traction, so they changed it to “Enoree County” to get more area support.

With this rash of new counties there were bound to be conflicts. For example, the proposed county of Eutaw would have take land from the very large Orangeburg County 1907. However, Calhoun County was competing for that same area in 1908, and won out over Eutaw with the voters.

Some of the territory embraced in the proposed Eutaw county, is also embraced in the proposed Calhoun County, which will cause a conflict between the two new county propositions. It is a novel situation, and just how it is to be settled we do not know, but we suppose the people in the disputed territory will decide by vote with which of the new county propositions they would rather cast their fortunes.

Some of the proposed counties were tossed out due to technicalities. The proposal didn’t meet one of the constitutional requirements, or there was some other glitch. Those others that didn’t make it were rejected by voters. Here are the results of the Enoree/Woodruff vote: The period from 1895 to 1915 saw the largest number of proposals for and the largest creation of new counties, but that wasn’t the last of it. As late as 2012 a proposal was submitted for a new county taken from Lexington and Richland Counties on the north side of Lake Murray. The new county would be called Birch County, taken from the names of the affected communities of (B)allentine, (IR)mo, and (CH)apin. Nathan Ballentine, who represents the area in the state legislature, said that “Chances are slim to none that it would ever happen.”

So, South Carolina might have looked very different if some of these proposed counties had come into being. Growing up in the town of Gray Court we always felt a bit isolated from the county seat of Laurens. That isolation would have increased if we had been in a completely different county. What would that have done to our relationship with Woodruff? Would Woodruff have thrived as a seat? It’s interesting to speculate.

I’ve always taken pride in the fact that I grew up in the same county where my ancestors settled in 1768, and that it actually went by the same name throughout that time. That certainly would have changed things. Come to think of it, we probably wouldn’t have moved to Gray Court in the first place. We moved because my father took over the schools in Gray Court. If they were in a different county they would also have been in a different district. Again, who knows?

Regardless, I’d still like to see a state map that incorporated all of the new counties. I think it would look a bit more like Georgia, with all of its tiny counties. 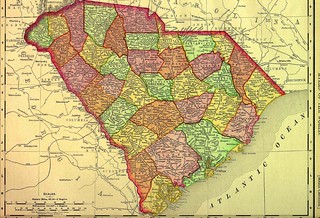 One thought on “The Lost Counties of South Carolina”