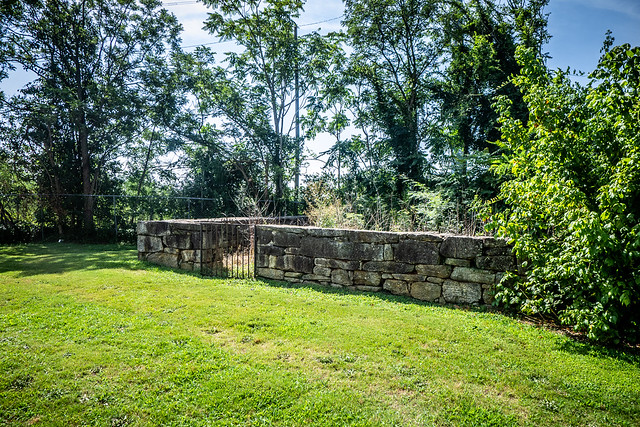 When I’m out exploring I’m easily distracted by roads with names that contain the words “School”, “Church”, or “Mill.” This is usually an indicator that there was, or possibly still is something historic and of interest on that road. For some reason, Parkins Mill Road in Greenville has escaped my scrutiny. Perhaps it’s because it’s because I’ve driven it so many times that it’s become common. Or, perhaps because it’s in such a suburban setting that I know it wouldn’t be of interest. Recently there was an article in the Greenville News about the history of the road and how it got its name. I decided that I’d check it out for myself.

Like so many roads in Greenville, Parkins Mill is confusing. It’s actually Y-shaped and intersects with Laurens Road at two different points. The southernmost branch is designated as “East Parkins Mill Road.” The southern terminus is on Mauldin Road just south of I-85. So, you have to know which Parkins Mill you’re discussing.

Present-day Parkins Mill (both branches) run through affluent neighborhoods with houses reaching into the millions of dollars.

Of course, this wasn’t always the case. According to a 2018 Greenville News article by Elizabeth LaFleur quotes an earlier article by Judy Bainbridge…

A path once worn by farm carts traveling from the family’s home to the Reedy River became a road known as Parkins Mill Road and is now known as Mauldin Road. Modern day Parkins Mill Road actually divides the acreage that once belonged to the [Parkins] family, according to Bainbridge

How’d we get the Parkins Mill name? – Elizabeth LaFleur

That 2006 article by Bainbridge gives an extensive history of the Parkins family. The patriarch, Allen R. Parkins, moved his family from Newberry County in 1817 to Greenville where he purchased huge tracts of land. His holdings stretched from Pleasantburg Drive to the north, to Laurens Road to the east, and the Reedy River to the west.

At the confluence of the Reedy River and Brushy Creek Parkins built a water-powered mill to grind corn and wheat to produce flour and meal. The mill doesn’t show up on the 1825 Robert Mills atlas, but is present on an 1830 map of the area.

The mill and property passed down through the Parkins family and was sold a couple of times. There is some discrepancy as to how long the mill actually lasted. According to the Bainbridge article there were two mills on the site. Tully Babb built a new mill in this location in the 1880s, which was razed in the 1980s. An article in the Greenville Journal from this past January states that…

The mill building would ultimately stand, even if in disrepair, for more than a century until the mid 1990s the mill would be demolished to make way for other developments and county use.

UPDATE: The Bainbridge article DOES say that the Parkins Mill was demolished in the mid-1990s, agreeing with the Greenville Journal article. The Tully Mill was on Parkins property, but in a different location.

As usual, I tried to find information about the Parkins family and the mill in the local news. Most of the links were for later real estate listings, but there were some articles of interest. I find three different articles in The Greenville News about stills located in the near the mill. This article from 1900 is an example:

Another article describing a horse theft seems to indicate that the mill was still in operation around 1901.

The mill location on the Reedy River apparently was a favorite spot for picnics, too, as indicated by this 1903 article.

In the 1920s the mill location was sold to Greenville County for a new sewer processing system. The new sewer system began operation in 1928.

I love the line from the caption above, “The results are well-known to those who have summered in the city in recent years.” I’m sure this was an improvement to just dumping sewage directly into the river.

A 1938 topo map of the area shows the new sewer plant prior to the construction of I-85. The sewer operation was expanded to the other side of the Reedy and for many years a landfill was also in operation in the old mill location. Combined with the pollution from upstream textile mills, I’m sure this area really lost its appeal as a picnic spot.

Apart from the road name, little remains of the Parkins family estate. The old family cemetery still exists, but it, too, is pretty much abandoned. It sits behind an old Super Lodge Hotel, right next to I-85.

Find-a-Grave says that there are only six interments at the site. Allen, his wife, Eliza, and four of their children are buried here. I decided I needed to find this last remnant of the Parkins family.

I had driven past this spot many, many times, but had never given it a thought, much less realizing that a cemetery associated with Greenville’s history was here. From the road there is no indication, just a creepy old Super Lodge Motel right at the interstate.

And by creepy, I mean really creepy. A chain link fence surrounds the property. Only motel “guests” are allowed on the property after 9:00. The vehicles behind the fences were older and included several mopeds.

The place had a contradictory air of transience and permanent residency for those who are less fortunate. There were no less than six shopping carts from the nearby Home Depot that had been collected in the parking lot.

The small cemetery was on the other side of the fence on a well-manicured lawn. The cemetery’s stone wall looked the be in pretty good condition.

Sadly, the cemetery itself is not so fortunate. It was terribly overgrown, including some nasty looking thorns.

There were four vaults with slab table stones. This would be Allen, Eliza, and the two surviving sons, Andrew and Henry. The cemetery also contains the graves of two unnamed infants, but these were not visible under the vegetation, if they were marked at all. The writing on the slabs was illegible.

It looked like some people were tossing trash over the wall and into the cemetery. The general condition of the cemetery was not good. I wish someone or some organization could reclaim and rehabilitate the site.

I do wish that in addition to cemetery there were some way to commemorate the Parkins legacy. One possibility might be the extension of the Swamp Rabbit Trail. Construction on an extension of the trail is already underway and the trail even appears in Google Earth Street. The trail goes right by the site of the old mill.

I don’t know if this section of the trail is even open to the public. I’ll have to see if it is and check it out. I’d also love to see a photo of the old mill building, regardless of whether or not it was the original. If it was demolished as late as the 1980s, then surely someone has a photo. I’ve not been able to find one online.

One last bit of information about Parkins Mill…

Judy Bainbridge’s 2006 article states that much of the Parkins family land was purchased by Tully Babb in the 1880s. Babb’s land became known as “Babb’s Hollow” and was quite the wild frontier of Greenville. Tully Babb was known as a prosperous farmer and mill operator, but also as a moonshiner with a violent streak. He became known as a “wealthy convict” as he served five years for the murder of a rival farmer, and even engaged in gun fights with local law enforcement who were trying to uphold Prohibition laws. Tully Babb’s story sounds even more interesting than Allen Parkins’, and might be worthy of its own blog post.

One thought on “The Allen Parkins Project”