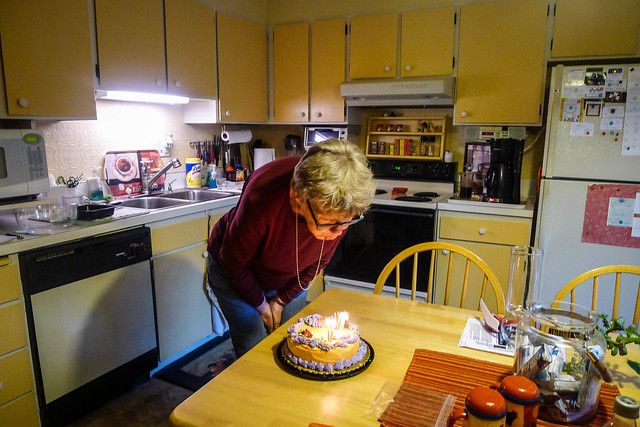 This past Friday was Aunt Ellen’s birthday. Since we’re now on the same coast, Laura and I decided to drive down to Coos Bay, Oregon, and celebrate it with her. We decided to take the Mini and drive down along the coast, catching some spectacular scenery along the way.

END_OF_DOCUMENT_TOKEN_TO_BE_REPLACED

Been a busy weekend – explorations on my birthday, recuperation on Saturday, and a day full of music on Sunday. Saturday’s explorations were so involved that I’m breaking them into three separate blog posts. Writing those up, along with all the links and research, will take some time. I may be done with that mid-week. … END_OF_DOCUMENT_TOKEN_TO_BE_REPLACED END_OF_DOCUMENT_TOKEN_TO_BE_REPLACED

Saturday was my Aunt Grace’s 90th birthday. My cousin John held a surprise birthday party for her at his house, and many of the Ellenberg cousins gathered for the bash. My mother, Aunt Ann, Aunt Lois, and Aunt Grace were all present for the event. Of course there was cake and munchies for the crowd. … END_OF_DOCUMENT_TOKEN_TO_BE_REPLACED END_OF_DOCUMENT_TOKEN_TO_BE_REPLACED

A couple of weeks ago Houston celebrated his 60th birthday. We wanted to hold a surprise birthday party for him, and he provided us the perfect opportunity this weekend. Houston suggested that he come up to visit, and we could head out for one of our photo treks. What he didn’t realize was that while … END_OF_DOCUMENT_TOKEN_TO_BE_REPLACED

…Although I don’t think things are nearly as bad as you made out in this video… Hope it was a good day!

It’s been a busy weekend. First there was the dedication for the new Townes Science Center at Furman on Friday, then there was a birthday party for my mother’s 80th birthday on Saturday. The Townes Science Center is named for Charles Hard Townes, Nobel Prize winner for his pioneering work on maser and laser technology. … END_OF_DOCUMENT_TOKEN_TO_BE_REPLACED