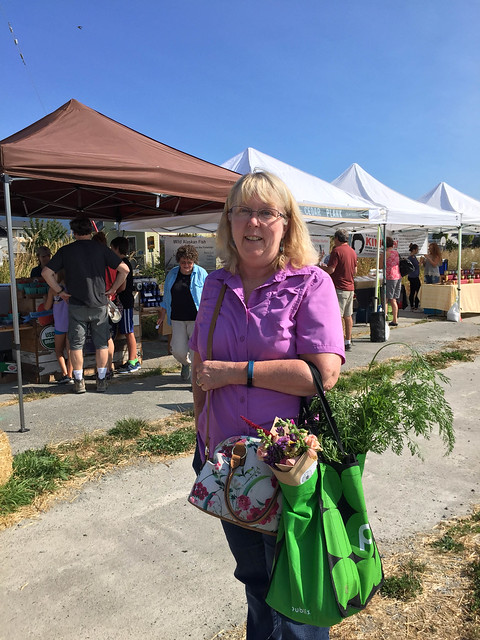 It’s harvest time in Skagit Valley. That means fresh fruits and vegetables everywhere, picked right from the fields we have to drive through to get to the island. It seems most of our visits to the area have been in August just as things are coming into season, so I’ve always been impressed with the bounty. This past week we made the most of it.

It started Sunday a week ago. Duff and Linda stopped by to say that they were heading to the farmers market in Edison. We decided to meet up with them there. We drove across the flats and through the crazy corners leading to the small town and found a small market with several booths. The town itself was hopping, with more activity than I’d ever seen.

Berries are a big deal around here. Sakuma Brothers Farms grows many square miles of blueberries, strawberries, raspberries, and just about anything else. Blueberry operations are now in full swing, but other berries are available. We bought fresh blueberries and strawberries, as well as blueberry jam and honey made from raspberry fields. 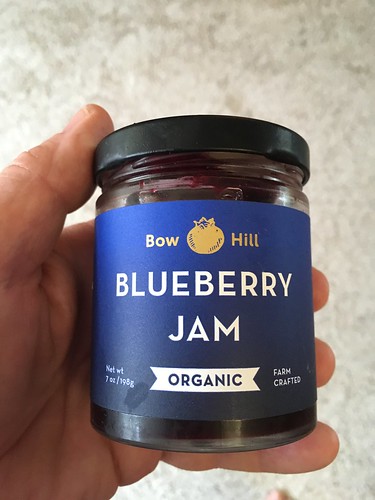 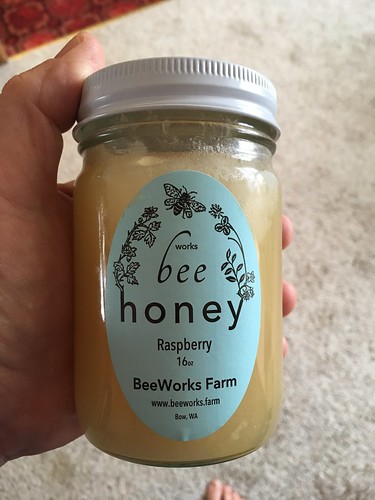 Add to that greens, carrots, new potatoes, and fresh Alaskan halibut, and we had the fixings for an amazing meal. 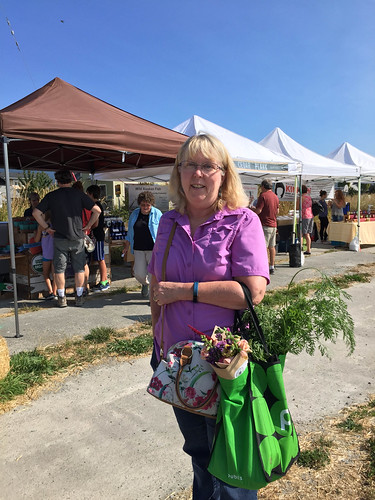 The only thing missing was bread. Duff and Linda were walking around to the Bread Factory on the main street of Edison. We walked with them. 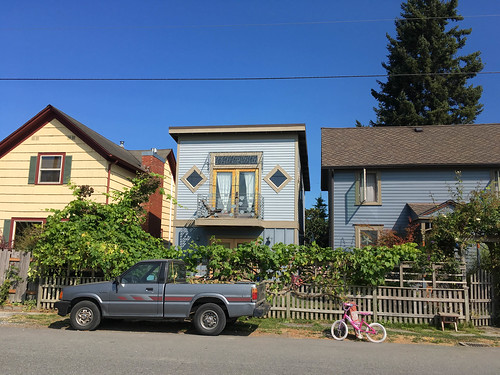 The Old Edison Inn was open and doing a good business, as well as the Mariposa Taco place. The big draw was a place called Tweets. There was a line out the door waiting to get into the eatery. 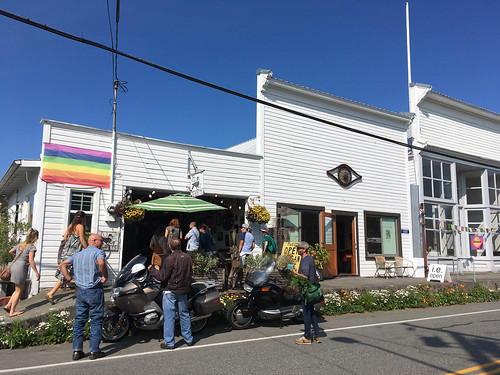 The Bread Factory was several doors down. Duff and Laura went in and got bread while Glynda, Linda, and I explored a couple of the little shops that were open. 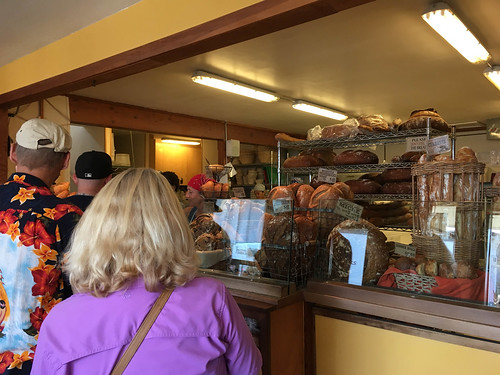 We walked back to the car with our treasures, but we weren’t done. As we were driving through the countryside we passed a sign advertising goat cheese. We pulled in. 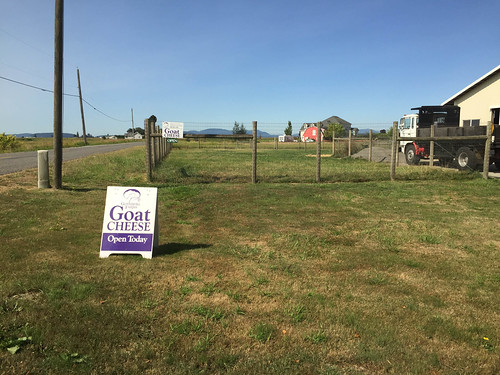 There was a refrigerated stand and everything was honor system pay. We got a small container of goat cheese for $12, which seemed amazing that something that pricy was on an honor system. 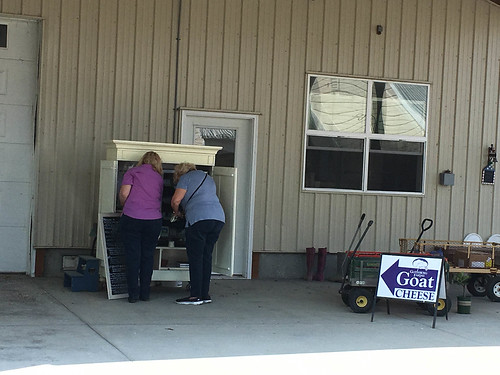 Along the way we pass fields of corn. One one side street we passed a stand advertising corn at four ears for a dollar. Again, it was honor system. We added corn to our menu. 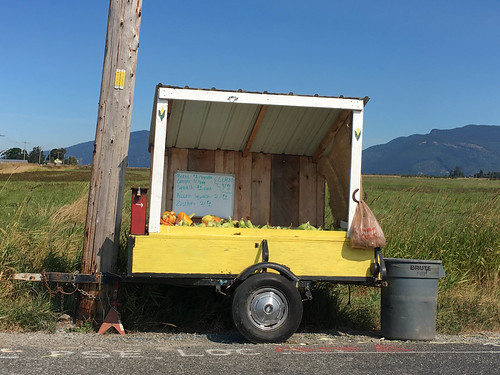 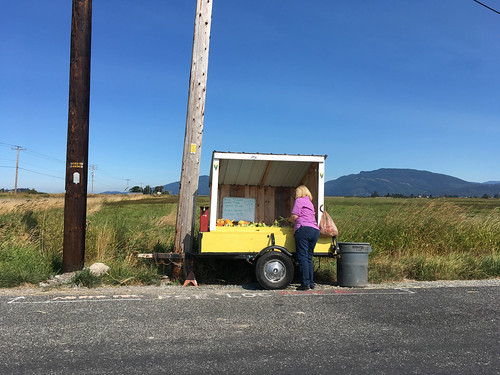 That evening we had the most delicious meal of halibut and fresh vegetables. It started with martinis and crackers with goat cheese spread with a bit of honey. I’m never going to lose weight out here like this. To offset the calories I went with Duff and Linda to walk the dogs. We passed a neighbor’s house that had even more produce set out on an honor system. I didn’t buy anything, but Duff got some plums. 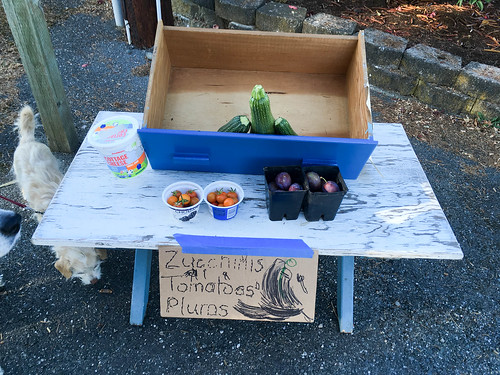 That was Sunday. On Tuesday Laura and I went to the Bow Farmers Market to see what it had. It was in a field next to the Samish Bay Cheese Shop. 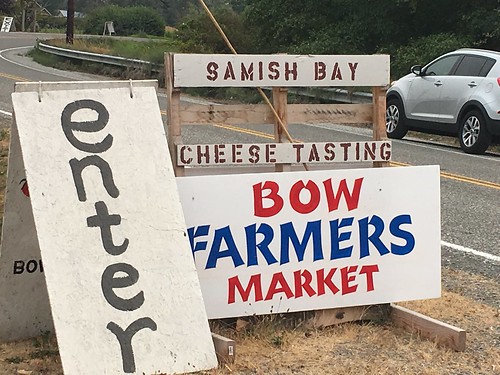 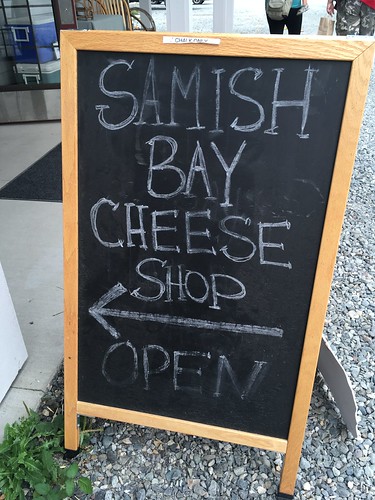 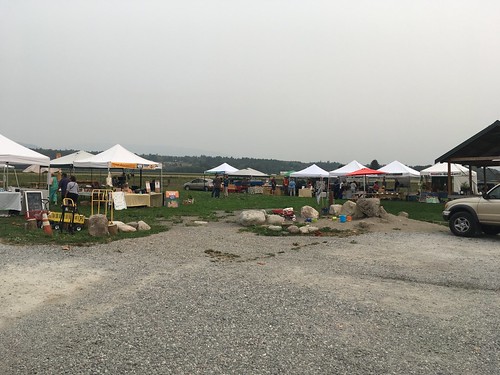 There were some of the same vendors we had seen Sunday, but there were also more arts and crafts. There was one guy that made unusual stringed instruments from gourds, but he was snoring behind his booth, so I didn’t pick up an instrument to disturb his sleep. We didn’t buy anything this time. We tasted some of the cheese and the shop next door, but again escaped without purchases.

Over the course of the week we went to several restaurants featuring fresh foods that had been locally sourced. We went to Taco Tuesday at the Old Edison Inn where we had some of the best seafood tacos with scallops, shrimp, and fish. Glynda and I played a round of long board shuffleboard. I have to admit that she beat me soundly. 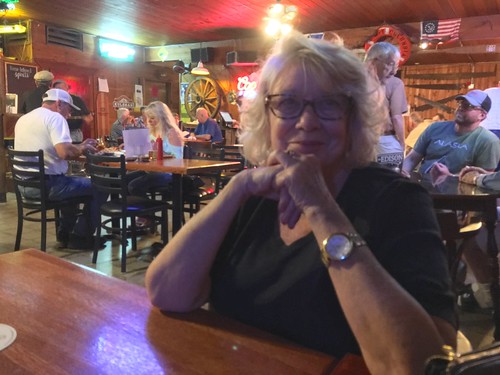 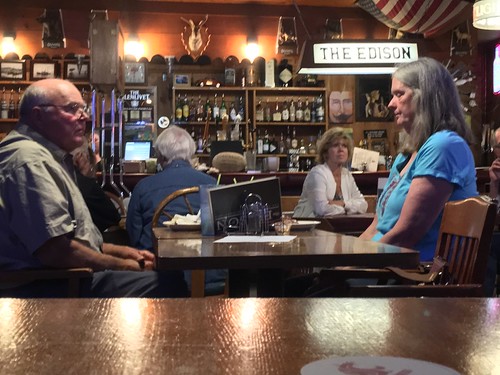 Glynda and I had lunch at Calico Cupboard in Mount Vernon while Laura was working. We also made a trip to Laconner and had lunch overlooking the Swinnomish Channel. 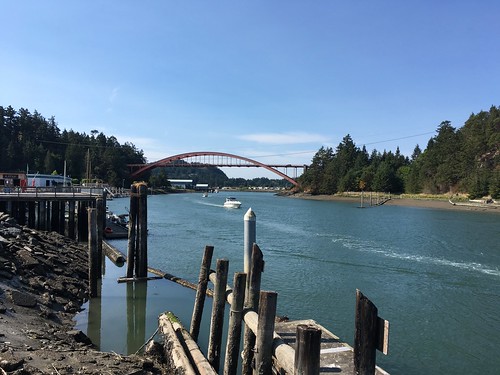 On Thursday Glynda’s friend Cathy came up from Oregon and the four of us went to Chuckanut Manor for another locally sourced meal looking out over Samish Bay. 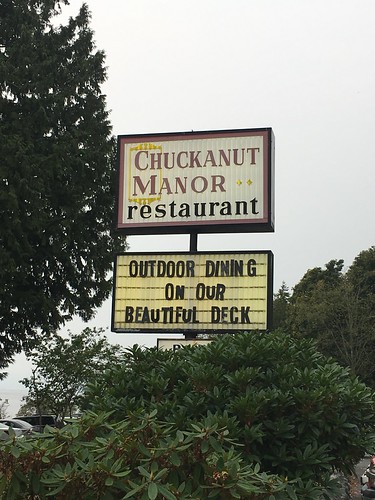 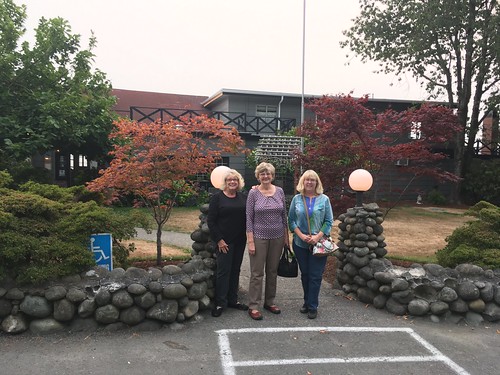 The one meal we haven’t yet had is Dungeness crab. I always thing back to my first visit to the island in 1988. It was also in August. Laura’s father took us out in his boat to set crab pots one morning, then back in the evening to bring them in. We boiled them and ate them that evening. Ever since then I’ve looked forward to eating crab up here, although I’ve not had another opportunity to gather my own.

As I said before, we have mostly visited the area in late summer when things are coming into season. It will be interesting to see how the availability changes as the year progresses. I do know that I’m going to have to do lots more kayaking, walking, and biking to offset all of this wonderful foo. 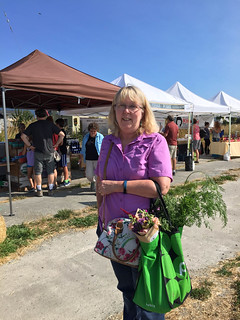 One thought on “Skagit Farmers Markets and Locally Sourced Foods”