Old Pickens Court House is now in the eastern part of Oconee County. It was originally settled on the banks of the Keowee River, and now borders the lake of the same name. The majority of the town is on property that now belongs to Duke Energy and the Keowee Nuclear Station. On the Google map below the entire area is blurred out because of security concerns.

Speaking of maps on which Old Pickens does not appear, the town is also missing from Robert Mills’ map of the Pendleton District. The town was established AFTER his Atlas of South Carolina was published. Neither does it appear on the 1839 reprint of the atlas.

The property around the church and cemetery is now owned by the Historic Old Pickens Foundation. Most of the town, however, is on Duke Energy property and is under tight security. Duke also provides security for the church itself to prevent vandalism, etc.

The church grounds are open to the public. The church is often open Sunday afternoons, as we discovered on this trip.

In 1828 the Pendleton District was split into two counties – Anderson to the south and Pickens to the North. The town of Pickens Court House was established on the banks of the Keowee to serve as the administrative center of the new county, with plots laid out for streets, houses, and commerce.

The town was never very large. Many of the lots were purchased by speculators. However, several businesses were established. According to the site’s nomination form for the National Register of Historic Places the town…

“…only had a little over one hundred inhabitants by 1860, when it boasted the court house, several shops and stores, an academy, a newspaper (the Keowee Courier), a hotel, a stable, a school, a jail, a Masonic lodge, and a church — Old Pickens Presbyterian Church, which was the only church active in the town and where worship was open to Christians of all denominations.”

The town was laid out in lots, as shown in the map below.  According to Joyce Brickett, the actual court house sat about where the Duke employee parking is now. One might think that the demise of the town was due to inundation from the lakes, which is what has happened to several other small communities in the area. However, the town started to die out nearly a hundred years before the lakes were dammed.

In the 1860’s the county’s population was growing in the east, but not so much in the west. The shifting population meant that the county seat and courthouse were inconvenient to a large portion of the county constituents. There were complaints about the town not being suitable for its purpose.

“One woman from Abbeville called it a ‘little red knoll of earth’ that only ‘a half starved lawyer would think of vegetating in such a ground.’ Others said there were no accommodations and travelers had to take ‘their own provisions and whiskey’. Others said you had to walk up one side of the mountain to get to court and down the other side to get home.’ – “impossible for those attending court to get a meal of victuals.”

In 1868 a petition was granted to split Pickens County into present-day Oconee and Pickens Counties. Walhalla became the government seat of Oconee, and a New Pickens Courthouse was established 14 miles east of the old location, nearer the population center. The county jail was also moved, as were several houses. After only forty years, the town quickly died out. Only the church remained to serve those in the area. A hundred years later, in 1968, the church was finally disbanded.

The church is the most prominent reminder of the town’s existence. After some years of neglect and vandalism, it has been restored and maintained by the Historic Old Pickens Foundation. The building itself is a rectangular structure with bricks fired from clay taken from the Keowee River. The original wooden pews and pulpit furnish the sparse sanctuary. The church contains a slave gallery, with a side entrance to maintain segregation. Part of the earlier township has been used as a re-burial ground for cemeteries that were inundated by the lakes. These are laid out in straight rows with markers indicating the original locations. One large section of the cemetery, close to the lake, is the private cemetery of the Craig family. This is a more modern enclosure. Even though the town is gone, there are still a couple of other reminders of its existence. At High Falls County Park on Lake Keowee one can find the home of Pleasant Alexander. Alexander was a prominent citizen of Old Pickens, and built one of the first homes in the town. The grand old house has been moved to its current location, and serves as a park office. The Hagood family was instrumental in both establishing Old Pickens, and in moving the town to its new location. When the town moved in 1868, the Hagood House moved with it, and can now be found in the current city of Pickens. It’s on the National Register of Historic Places. 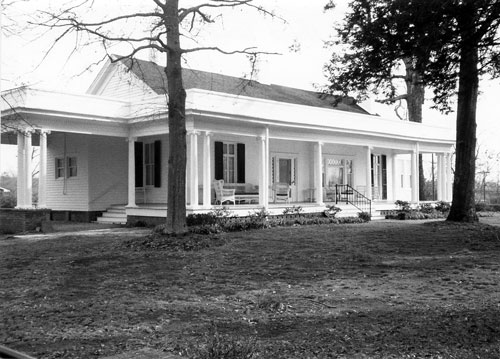 The area is well worth a visit. It is a true ghost town, and reflection of bygone times.