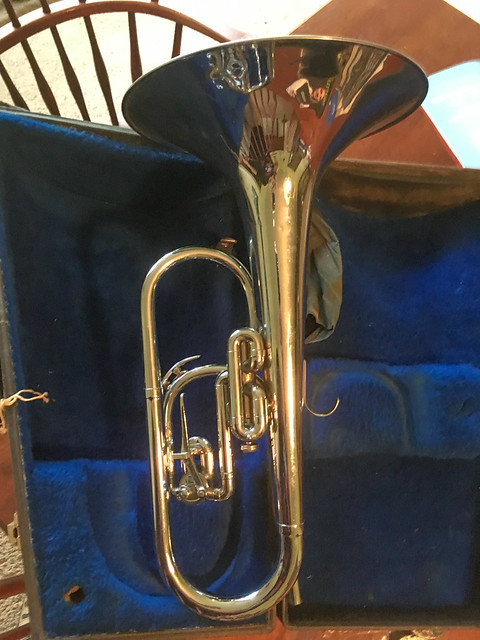 Our air conditioning died. It was old and probably needed to be replaced anyway, but it’s still a pain when it happens. So this week Laura and I have been emptying the attic so that the installers have access to the air handler and the ducts so that these can be re-insulated. During this process we found tons of stuff we had completely forgotten about, most of which we’re just tossing or sending to Goodwill. Among these items we discovered an unusual musical instrument, one that I had never been able to identify…until now.

Flashback to the mid-1970s…I was a teenager, and my dad was the assistant superintendent of Laurens District 55 schools. This meant that he had access to the South Carolina Government Surplus office in Columbia. My brothers and I would make regular treks with him and wander through acres and acres of mostly army surplus stuff.

I’m not going to get into the legality of us buying this stuff for our own personal use, but we always came home with amazing treasures. Our haul included army boots, back packs, trenching tools, canteens, camouflage clothing, cookware, sleeping bags, tents, furniture, fans, river rafts, and even a huge cargo parachute that we tried to fly as a kite with somewhat disastrous results.

Our trips down there were always a treasure hunt, and we never knew what we would find, or what Dad would let us buy. On one trip we found two unusual brass instruments. These were similar to each other, but slightly different. The horns had a large bell similar to a flugelhorn, but it was the valve arrangement that was puzzling. Instead of the normal three valves they had a single piston valve and a single rotary valve. One of the instruments took a standard trumpet mouthpiece and the other took a French horn mouthpiece.

We were all brass players, so these things intrigued us. My dad played trombone, Houston, played trombone, Stephen and I played trumpet. We each took turns trying to figure these things out. I got to where I could play several recognizable songs, and even played one in church. However, their identity remained a mystery. We asked all of our band director friends, but it seemed that no one knew what they were.

The instrument that used a French horn mouthpiece was lost. I have no idea where it might be. The other one wound up in my attic, first when Laura and I got married, then after we moved to our current house. I had forgotten I even had the thing until we started cleaning out the attic.

Back when we were making our first inquiries the Internet didn’t even exist. Now I could take digital photos of the instrument and upload to a wide audience. Many of my Facebook friends are brass players, and they came through for me. 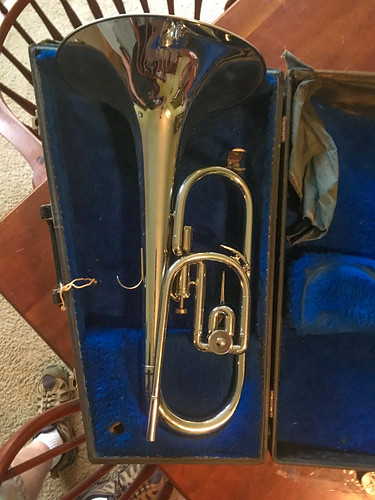 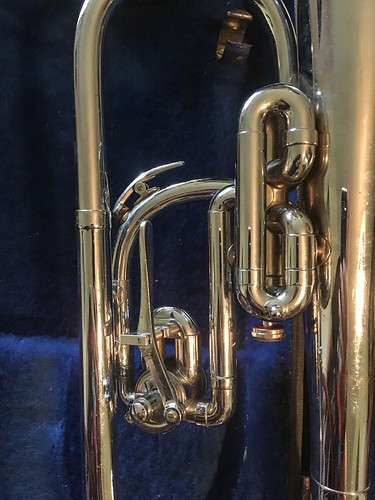 Ken suggested that it might be a type of bugle, but I was skeptical. Ed Donovan had a more specific answer. He said that it was French horn valve bugle, an instrument once used in drum and bugle corp.

Ed also sent me a link to some excellent information about the Evolution of the Bugle. This ties directly to regulations for competitions between Drum and Bugle Corps. A standard, classic bugle is limited to notes in the overtone series for that instrument. Originally trumpets had this same limitation until the addition of valves and additional tubing to all additional notes. Bugle corps began adding a an additional loop with a slide so that they could get an additional set of overtones. More intricate melodies and patterns could be played, often using a “handbell” style alternating notes along the bugle line.

Ludwig began adding a single piston valve to their bugles that accomplished same the same thing as the D crook. These were installed horizontally instead of vertically, like trumpet valves, and would lower the overtone series by a whole step. However, the legality of these types of valve trumpets in corps competitions was often brought into question.

In addition to the piston valve, players would slide an additional hook in and out to get additional notes. Starting in the mid-1950s horn companies offered a replacement slide that incorporated a rotary valve that accomplished the same thing. The variety of bugles exploded.

In 1967 the National Band and Drum Corps Committee of the VFW passed a new rule allowing valves on bugles in DCI competitions. According to one website I found, my particular bugle, a Getzen Titles in D, was made sometime between 1968 and 1971.

So, I’ve got an instrument limited to a special repertoire and set in a specific time period. These are no longer used, but there is a nostalgia value to them. My mystery has been solved, which, in a way, is disappointing. However, if I didn’t want to know, I shouldn’t have asked. The instrument isn’t anything like I imagined, and I do appreciate knowing more about how it’s SUPPOSED to be played.

I couldn’t find any specific recordings or videos of this particular instrument in action, but I was able to find some good modern drum and bugle corps performances. I’ll leave you with a 2012 performance by the West Point Hellcats. 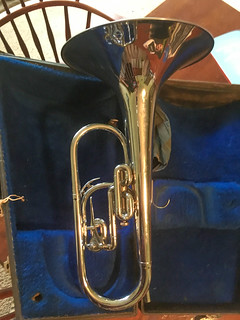