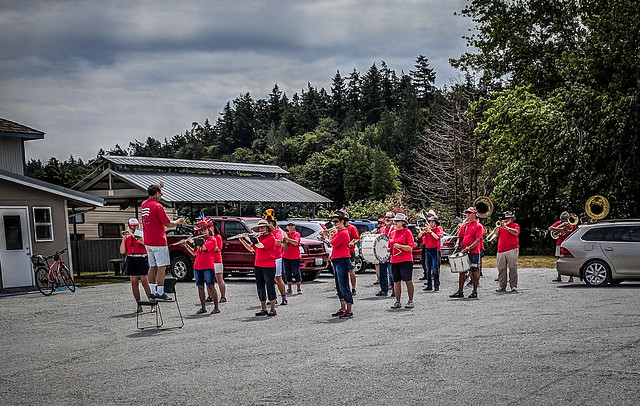 One of the things I love up here is the sense of community. There are lots of annual events, including the island’s Fourth of July Parade. The last time we attended the parade, Laura’s mother was still spending significant amounts of time on the island, seven years ago. This time I did more than just attend. I actually marched with a band in the parade, adding to the diversity of this year’s musical experiences.

The Samish Island Marching Band is a pick-up group that twice a year, at Christmas as a “sitting” band, and during the Fourth of July parade. The composition various according to which island residents are available.

I’d been asked by several to join the band, but I didn’t bring my trumpet out here with me. During the yard sale Jen Rathfield dropped by and started talking about the band. She said that she had a spare trumpet she could loan me. How could I say no? She brought the trumpet by along with a collection of the tunes we would be playing. Jen had swapped her trumpet for a tuba. 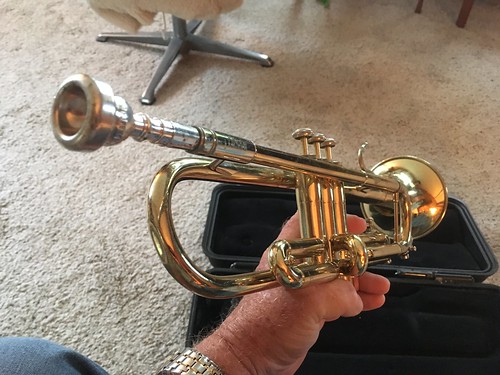 We would play The Star Spangled Banner and O, Canada at the start of the concert, then several Sousa marches during the parade itself. It took me awhile to get my embouchure back so that I could play anything, much less practice the tunes. I was wishing I’d started weeks earlier.

Along with the music and the trumpet, I got a band t-shirt. 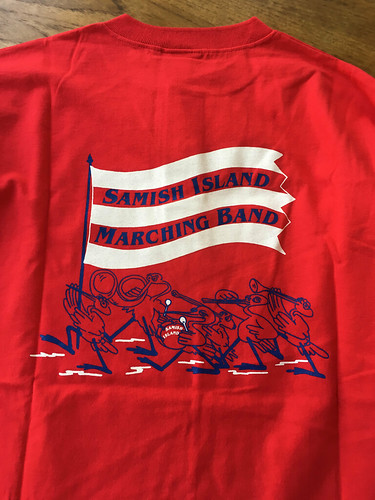 I figured I had to document this. In front of my music I rigged up my GoPro with the bicycle handlebar attachment. I’d have it running during the parade. 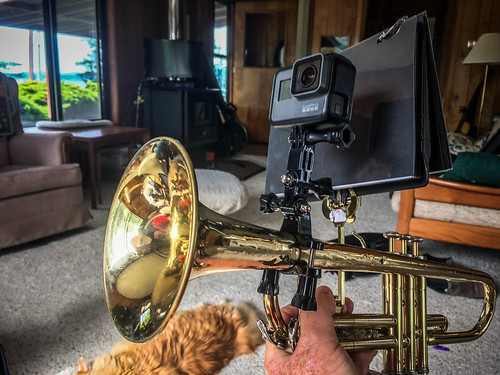 There were two practices. At the first there were only two other trumpet players, and they insisted on playing 2nd and 3rd trumpet. That left me on 1st trumpet, and very much exposed. I did my best, but I got lost quite a bit.

The second practice was even worse. We were down to just two trumpets, me and a thirteen year old. Although he played better than any of us, he still insisted on playing 2nd. At this practice we marched as well as played, and I found that disastrous. I just couldn’t do it. I’d run out of breath or lose my place or both. I was ready to back out, but there was no way I could do that now.

I adopted a new philosophy…

On the day of the parade we got some help. At least five other trumpets showed up, and most would be playing first. I felt a bit of relief. However, during our morning practice I still wasn’t able to play AND march very well.

The time came and we lined up to play the anthems and get the parade underway. Laura was with Duff, Linda, their daughters Laurel and Kayla, and Laurels five daughters. Laura took pictures as we got underway. 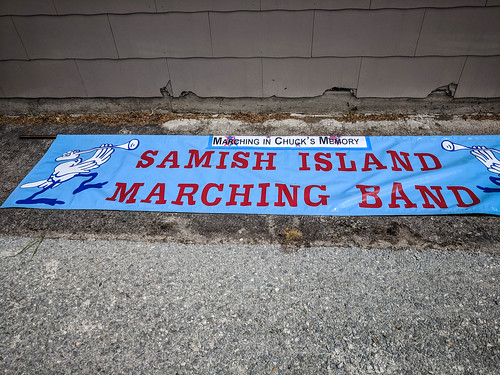 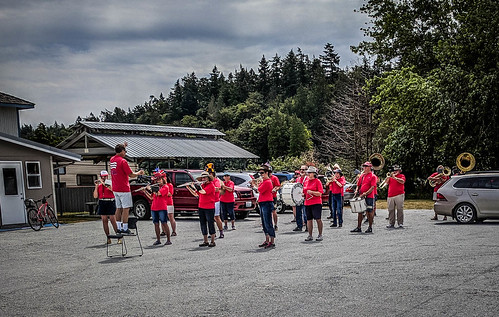 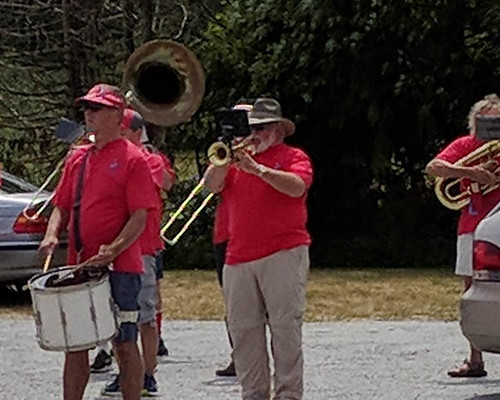 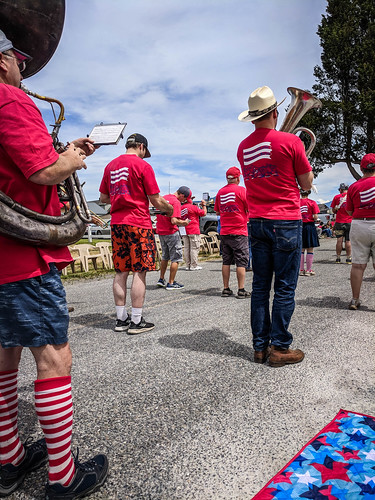 I had my GoPro going, but there is no way that I’m going to post any of that video. Rather, here are a few still images. Regardless, the crowds seemed to love us. 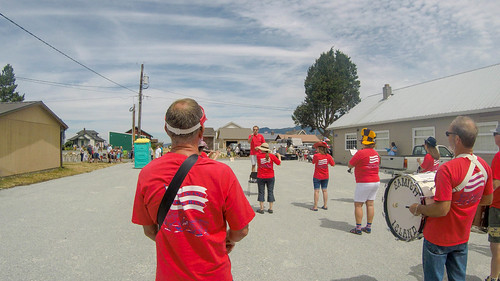 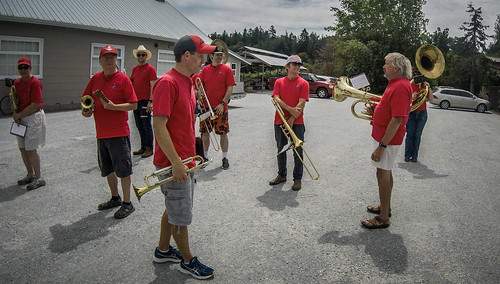 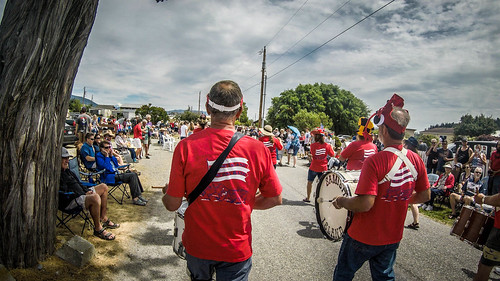 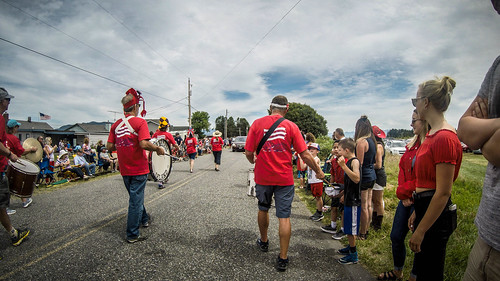 We marched to the end of the street where the rest of the parade was gathering, playing as we marched. At then end we took a break while all of the floats and groups pulled out. We would bring up the rear. If there was a delay, we would do some fancy turn around marching. 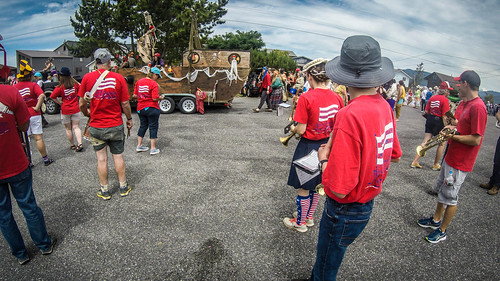 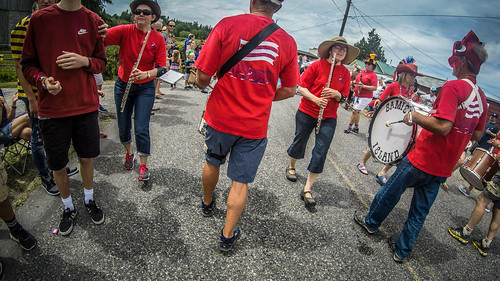 While that was going on Laura was taking photos of the parade. She spent more time playing with the girls than taking photos, though. 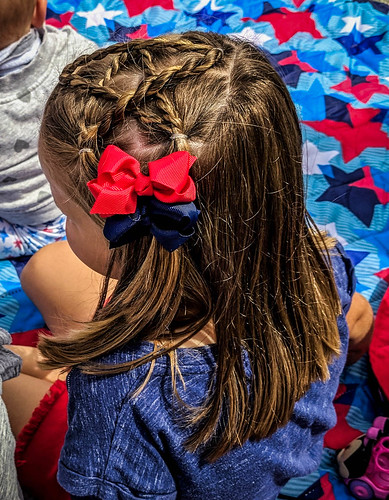 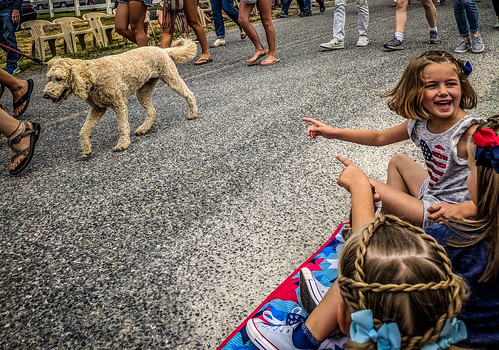 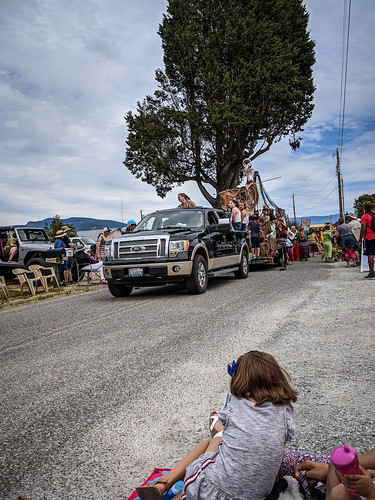 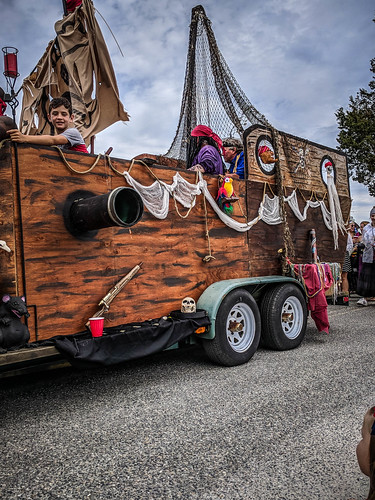 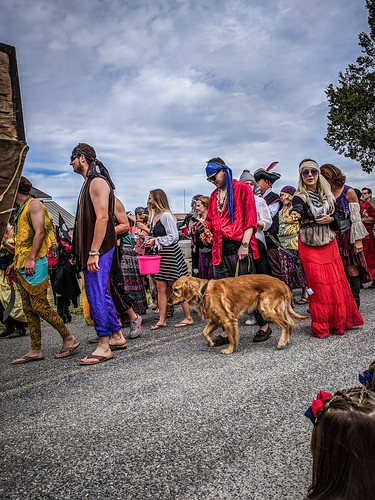 Our group brought up the rear. We gathered back at the community center and played three more pieces – You’re a Grand Old Flag, Yankee Doodle Dandy, and Louie, Louie. 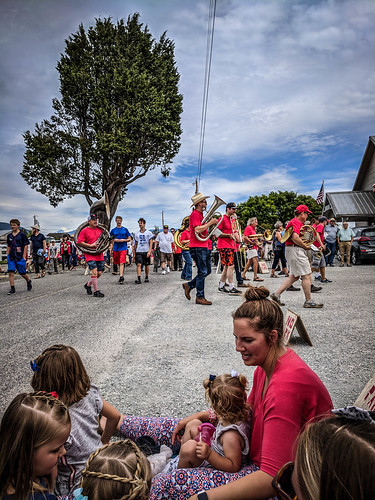 I survived. I was exhausted, but it was a blast. I think I played every tenth note or so while marching, but I think I fooled them with my confident expression.

After the parade we headed next door to Bill and Joan’s house for a party. Joan had driven her convertible in the parade with two mermaids on the back, both of whom were at the party. One of the mermaids insisted on wearing her “outfit” all evening. We joined the McDaniels later to shoot off fireworks, then we rejoined Bill and Joan on their patio. We watched official shows across the water at Mount Vernon, La Conner, Swinnomish, and Anacortes. It was a great way to wind up the holiday. 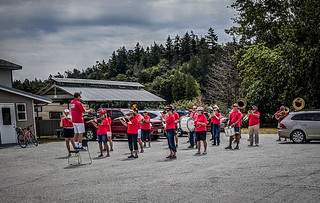