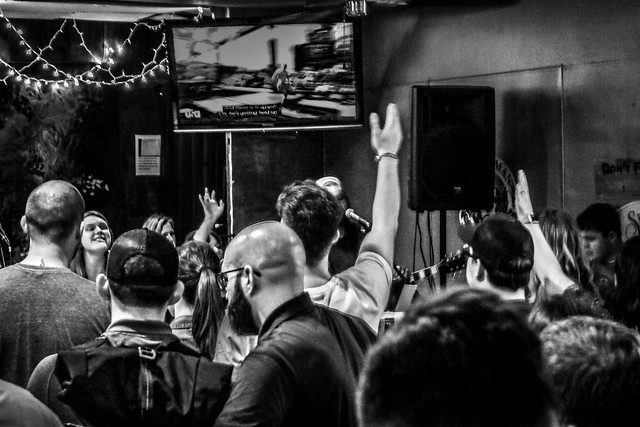 The event was the Tuesday following the Easter Weekend. I have to admit I was a bit skeptical. While other Beer and Hymns events I’d found online looked like rowdy songfests, the videos of this event looked more like church in a bar. I decided to give them the benefit of the doubt.

I arrived at the venue a little before 7:00. What’s on Tap is typical of the many taprooms that have sprung up around Greenville. There is a huge selection of beer, but no food. 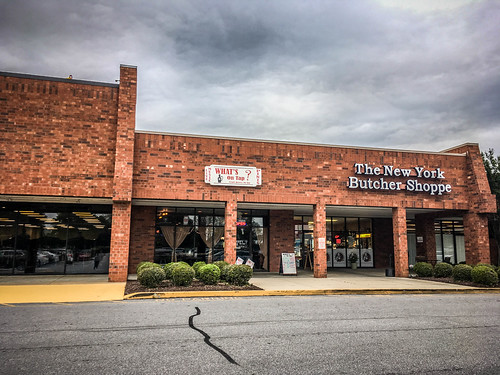 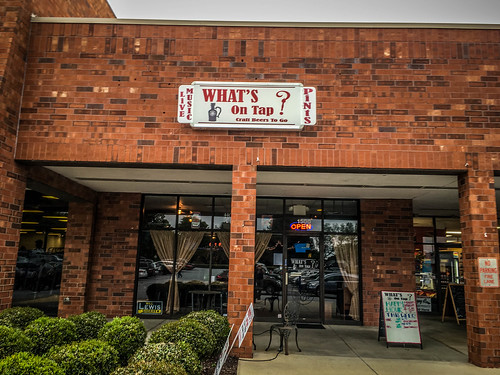 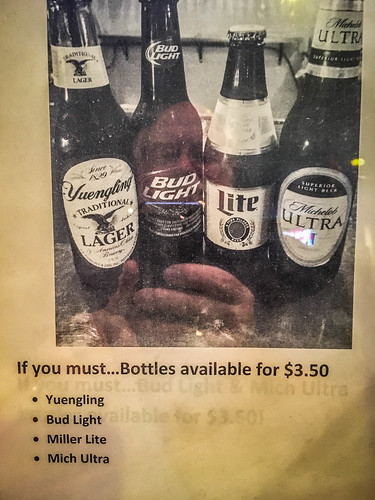 There was quite a crowd gathering. In one corner instrumentalists were going through a soundcheck. I stood in line to get a beer, then took a seat at the bar. 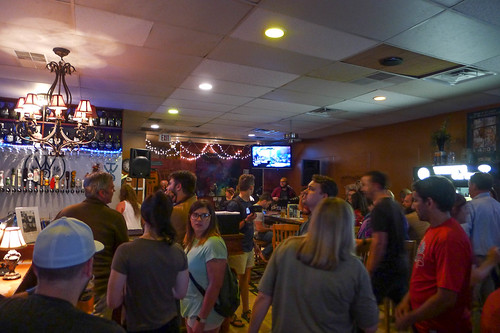 I was waiting for Don and a guy who appeared to be in charge walked by. While he was standing next to me I took the opportunity to ask a couple of questions. I asked if this was affiliated with any church, and he said that while several of the singers attended the same church, it didn’t have any affiliation. I don’t remember the name of his church, but it was one of those single name churches like “Elevate Church” or “Go Church or “The Edge Church.” My skepticism increased as he tried to get me to attend.

The group was a typical gathering of young Greenvillians. There were families present, as well as some older folks, probably members of the church there to encourage these folks. On the whole it struck me as a good, wholesome event, just set in a bar. One unusual thing was that several, including the lead singer with whom I’d spoken, had this weird Amish Hipster vibe going on – extremely short hair or shaved head, full beard, but no mustache. I hadn’t spotted that as a trend around town, but it could be a new thing.

Don arrived and ordered his beer, and things got underway. 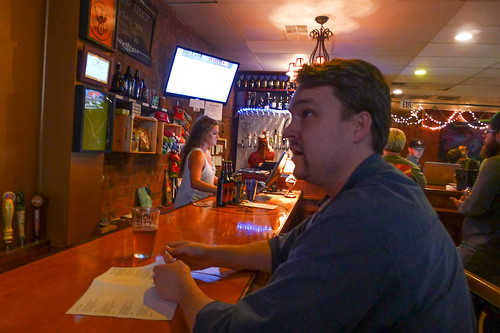 Printed “hymnals” were available. These had nineteen hymns, mostly traditional. The hymnal was specifically crafted for this event, including some Easter songs. It served more as a program or bulletin rather than a an all-purpose song book. Fortunately there were no praise choruses. That relieved my skepticism a bit. We grabbed a couple of them and got ready to join in. The hymnals are available for download in PDF format. 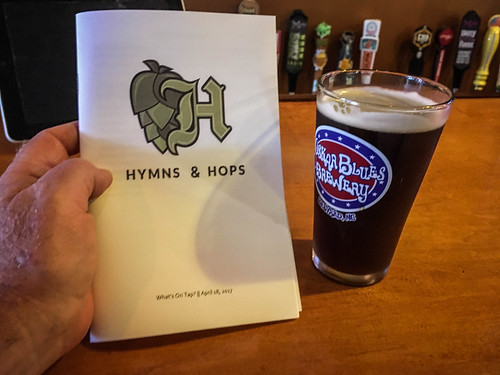 I couldn’t see the band very well, but it seemed to be several people – the lead singer and guitar player I’d met earlier, another guitarist, a drummer, a bass player, a female singer, and another woman playing fiddle/violin. All of it was amplified, as if this were just another bar band… 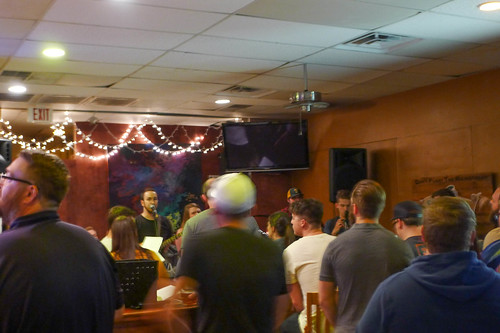 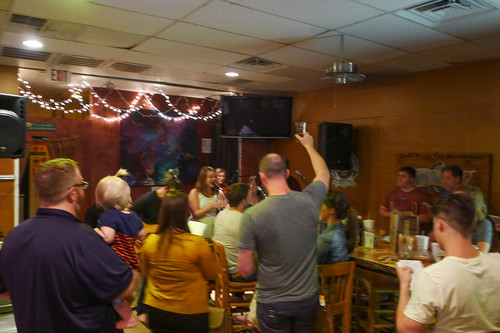 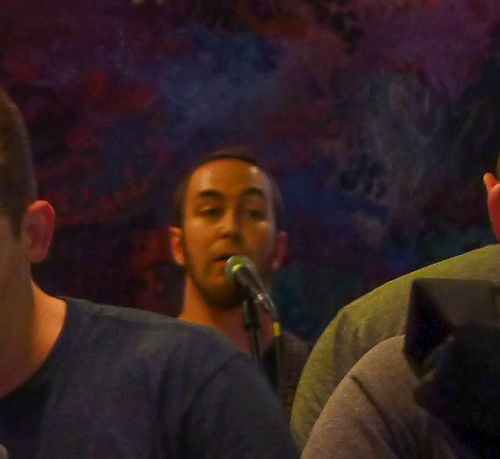 …and that’s kind of how things started. There was a band on stage performing, and people listening (or gabbing, or drinking, or a hundred other things) but not really participating. It was performers plus audience, and could have been any other band, except that they were singing hymns. Don and I sang, trying to fill in harmonies and parts as best we could. Here’s a short video clip. You’ll hear the lead singer encouraging the group to sing louder. 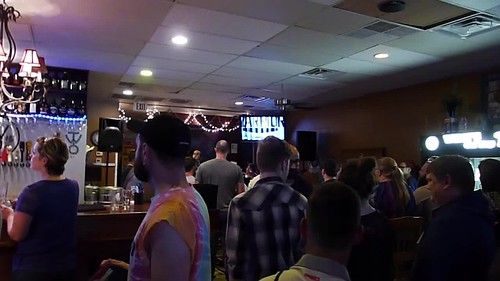 Eventually the crowd got settled with their seats and their beers and more started singing. The band went through the hymnal in order, taking a break right at the middle fold of the hymnal. The second half were the Easter songs.

I do have a couple of audio clips. The first is the opening hymn, How Firm a Foundation:

The second is from the second half, He Is Risen, Alleluia. You’ll hear Don and me singing the version of the melody that we know from the hymnal:

I didn’t stay for the whole thing. I’d been away from Laura the entire Easter weekend, been away for rehearsal Monday night, then this on Tuesday. I wanted to get back home to her, and didn’t know how much longer this might go on. I left Don to finish out the evening. 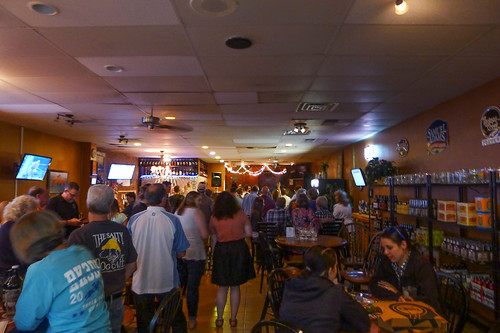 We had fun, and I’m glad we went. However, it was very much “church in a bar”, minus the preaching and prayers. As a very traditional church musician it seemed that even though they were singing hymns, it looked like the type of setup you would see in a more contemporary church, with a praise band leading the singing. There was even emotional hand raising, which I mention not to criticize, but to point to as evidence that this had heavy religious overtones, despite its setting.

Even so, I was glad to see that this was a congregation that didn’t try to hide that they drank beer. Though their worship style differs from what I’m accustomed, it made me curious about the theology of some of these single-named churches. I’m sure the “Jesus ate with sinners” and “water into wine” passages of the New Testament come into play here, which is fine with me. 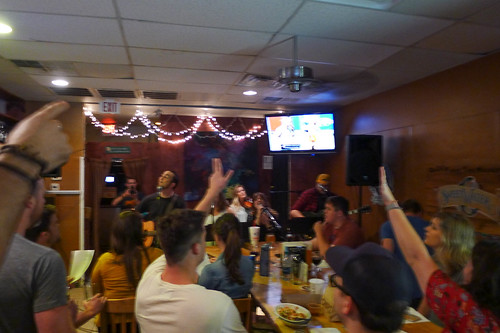 The musicians were quite good. They used some innovative chord progressions and arrangements for the hymns. Unfortunately, this tends to work counter to having the audience/congregation participate. It was hard to figure out exactly when we were to start singing and how to harmonize if we wanted to sing parts.

There seemed to be an obsession with documentation. It’s probably just a result of the Facebook/Twitter/Selfie oversharing generation, but for every hand raised in worship there was another raised with a cell phone taking photos and videos, as if to say, “Look at me! I’m doing this cool thing!” I’d like to think my photo taking was for a better purpose, for research for our own event and for blogging, but what I was doing was probably just as bad. 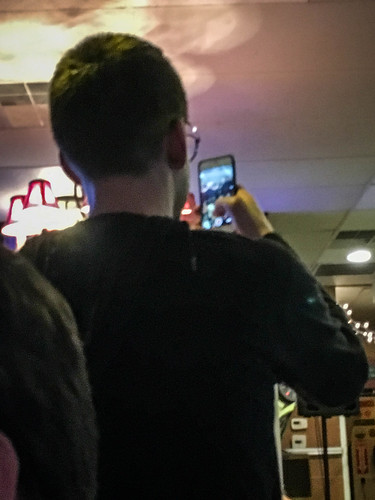 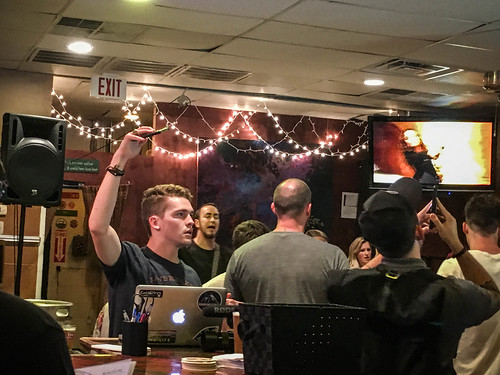 The bar setting itself proved to be a distraction. The room layout wasn’t ideal, but wasn’t much different from the pubs I visited in Ireland. However, Don and I found ourselves looking and laughing at American Ninja Warrior and wrestling on TV about as much as we looked at our hymnals. 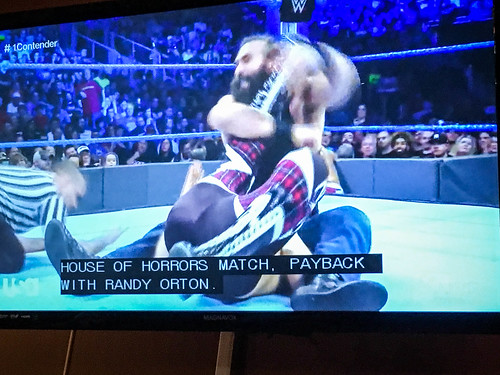 Lastly, while the printed hymnals were a great idea and a great help, Don and I wished that they had included printed music. Logistically it’s easier just to type up some lyrics, but it would have been good to include the harmonies. Granted, with the arrangements the band was using, those harmonizations wouldn’t have worked.

The Hymns and Hops folks have a good thing going and their constituents clearly enjoyed themselves. I wouldn’t dare try to waltz in and say, “You’re having fun the wrong way.” However, it’s not exactly what I was after. I was hoping for something a bit less religious and a bit more boisterous.

I think when and if we do get our event together it will be a small informal gathering pulling from several resources such as Beer and Hymns and Beer Choir. It probably won’t be in a bar, but there will still be adult beverages. We will have the music printed and available, and perhaps a way to project songs if someone finds something online they want to sing. We’ll include a good mix of religious and secular music – folk music, traditional songs, drinking songs, and maybe even a madrigal.

For the layout I don’t want it to be performers vs audience. There is a lot to be said for how drum circles or the open square for Sacred Harp singing encourage everyone to participate. And as with a Shape Note singing, I think anyone should be able to pick a song and lead. Accompaniment will be kept to a minimum and will only be amplified if necessary. Singing and participation should be the priority.

A couple of things I know for sure…it will NOT be a rehearsal. It will NOT be a performance. I’m hoping it will be rowdy and fun with no religious obligations whatsoever. We’ll see. 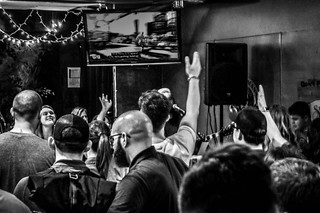 3 thoughts on “Hymns and Hops”