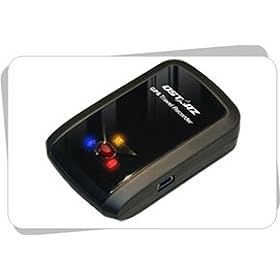 Automatic geotagging requires that the camera’s clock be synchronized with the GPS unit. These systems cross-reference the time stamp of the photo with the time stamp of locations on the GPS track. "I was here at this time, so this must be where I took the photo, which was taken at this same time."

In an ideal situation, the clock would keep perfect time with the GPS, but that doesn’t happen. Sometimes, mistakes are made while setting the clock. For example, over the weekend I had the time synchronized perfectly with the GPS, but I had the year set for 2006 instead of 2007. This is where an EXIF editor really comes in handy. With this you can edit the EXIF time and date information for the picture to make corrections.

There are several EXIF editors out there, I but I like to keep it simple. So far, I’ve been happy with EXIFEditor from Softpedia. In addition to being simple, this editor lets users change an entire batch of photos. In the case of the incorrect year, I simply selected the folder with my images and told it to advance the time stamp by one year for all photos. Easy to do. You could also add other descriptive data to all or selected images. The one big drawback with EXIFEditor is that it doesn’t seem to have support for RAW files – only JPGs.

Again, simple is better. Some of the data trackers come with their own software for saving track files. That’s fine. Just make sure that the file format matches your tagging system. Some save as NMEA, text files, or even KML, but my preference is for software that will save as a GPX file. This format seems to be more widely used. EasyGPS from Topografix is a free program that will download tracks from handheld GPS units. I haven’t tried it with units such as the BT-Q1000.

I’ve been geotagging photos for quite awhile now, and there is one thing I have learned – geotag before you upload. Flickr and a slew of other sites will allow triple-tagging, or provide a drag-n-drop map. However, the location data only works with that site. If you want to download the photo and use it some other way, the location data won’t be there. If you geotag the photos prior to uploading, the location becomes part of the image’s EXIF data, and will move with the image where ever it goes. Even if you edit the photo with Photoshop (with some notable exceptions such as HDR) the location data remains with the image, even though the edited version might be unrecognizable from the original.

Picassa and several other programs allow manual geotagging into EXIF. However, if you take as many pictures as I do, you need to automate the process. As of this writing, there are three good options.

The first system I tried out was Robogeo. It is certainly powerful, with lots of controls for creating KML files, and even has an uploader for Flickr. However, it’s not free. It does cost $40, but if you need that amount of power, the cost can be worth it. The latest version will geotag RAW files, which is a BIG plus. The one drawback was that it tended to be slow, especially the Flickr upload portion.

If you’re looking for a free version, there are two options. First is Locr. I’ve got to admit, I was disappoint with this system. I downloaded the stand-alone version of the software, only to find that I had to sign up for a free account with Locr in order to use the automated geotagging features. Why??? If it’s stand-alone, it should be truly stand-alone, and not require some sort of online authentication. When I did go to sign up for an account, their form was so confusing that it took me no less than five attempts. I’m a technology professional with years of experience in web design and all sorts of data systems. If it was this problematic for me, I can’t see too many casual users putting up with this. The system looked like it had some very good features, similar even to Robogeo’s, but I never got around to using them. My frustration level was just too high.

Chip’s Tumblr site provided the perfect free solution for me. GPicSync appears to be from Google, or at least is being developed under Google’s auspices. It’s simple, and doesn’t have the pizazz of Robogeo and Locr, but it gets the job done. If I’ve already got a Flickr uploader, I really don’t need that built into my geocoder. GPicSync will generate KML files, and will make a backup of the original images with original EXIF data, if needed. I didn’t see any support for RAW images, so that’s still a problem. However, it’s price, speed and simplicity make me rank it higher than the other two options.

So, to summarize, here’s my workflow – With GPS running and camera synchronized, shoot some pictures. Edit EXIF with EXIFEditor if necessary. Download the GPX file with EasyGPS (or ExpertGPS, which I purchased.) Use GPicSync to synchronize the GPX file with the images. Edit the photos as needed, then upload to Flickr. Here’s a more generic version in flowchart form…

At some point in the future, all digital cameras will come equipped with GPS sensors for automatic geotagging. Most casual users won’t adopt geotagging until then. Until that time, or until something better comes along, this looks like the best solution, at least for me.

UPDATE: I’ve had a bit more time to play around with GpicSync, and I’m even more impressed with its capabilities.  First, it does allow you to geotag RAW files, so that eliminates an entire step in my flowchart above.  Secondly, there are some cool tools built into it, such as the ability to view extensive EXIF data for your pictures, the ability to view the data in a GPX file, and a tool for synchronizing both the camera and the GPS.  You might still want to have EXIFEditor handy, though.