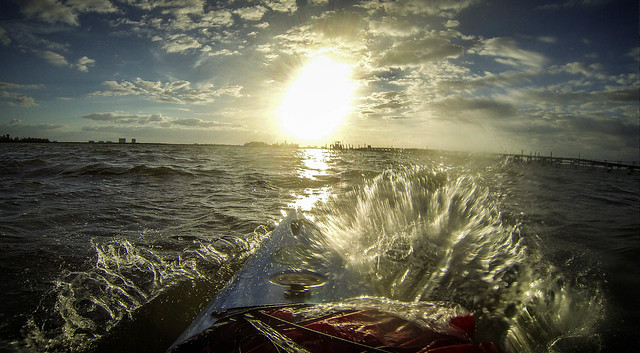 Been a busy couple of weeks. One of those weeks was a spring break trip to Florida where I got absolutely no writing nor blogging done. Here’s a quite wrap up of our spring break…

First, setting the stage, Laura’s mom has advanced Alzheimer’s and can’t stay by herself. She now lives with Laura’s sister, Amy, in Fort Pierce. Amy had a conference in California, and it happened to coincide with Furman’s spring break, so we were able to head down and stay with her mom while Amy was away.

I loaded up lots of things to keep me occupied for the week. I had cameras of various sorts, and had even loaded up another kayak. I was hoping to do lots of paddling while down there. And, I brought along the banjo, just for kicks.

After battling other spring breakers and Daytona Bike Week traffic down I-95, we made it to Amy’s by late afternoon. When I walked in the door Mrs. Wright said, “Did you bring your banjo? I enjoyed it so much when you played it at Christmas!” We were all three astounded that she remembered the banjo and a time frame. Of course, within five minutes she was asking me my name, but at least there had been a spark of remembrance. I was glad I had tossed the banjo in the car along with all my other gear.

Sunday was spent just getting settled into a routine. It was too windy out on the channel for kayaking. We took Mrs. Wright for a drive to her favorite spot on the beach, but didn’t do much more than that.

Monday morning I wanted to hit the water. I had left our tandem kayak down here so that we would always have a boat available. This time, though, I’d brought my Old Town Dirigo 120. I had selected this boat because the raise prow seems to slice through rough waters better than my Wilderness Systems boats. It’s easy to enter and exit, and I was hoping it would have a longer range. My goal had been to paddle several different venues this week. Alas, that was not to be. The weather just didn’t cooperate.

Even so, early Monday I started out for a sunrise paddle. The water was choppy and the winds brisk. I only paddled out just a few hundred yards off the coast, enough to watch the sun rise. 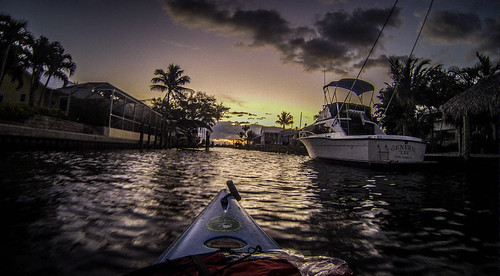 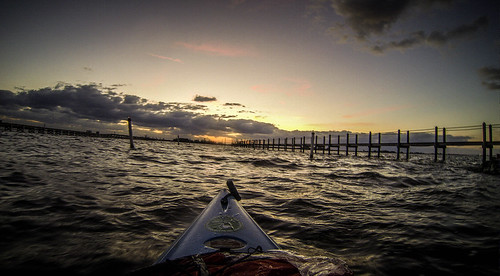 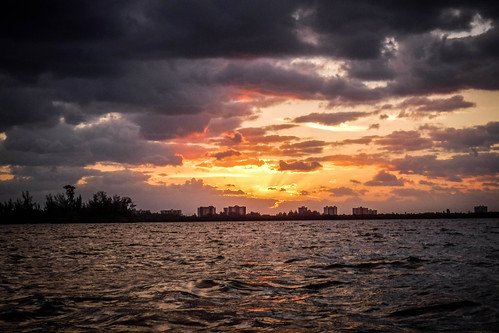 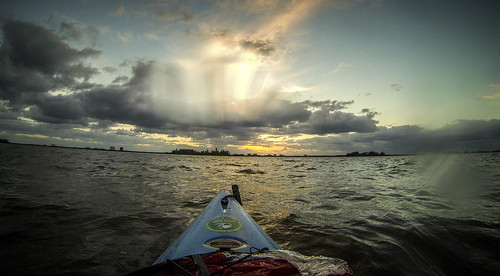 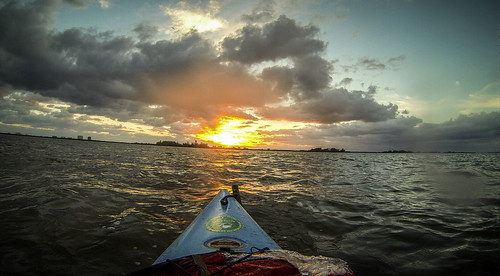 Seeking shelter from the wind and waves, I paddled over to the channel on the other side of Amy’s peninsula. As I entered the channel I felt a bump under my kayak. The boat lifted violently, then splashed back down. I turned to see thrashing, churning water behind me. I had either hit a manatee, or one had come up underneath my boat. At least, I think it was a manatee. I never actually saw it.

Sadly, the GoPro only points forward, so I wasn’t able to catch it. By the time I realized what was happening and turned around with my other camera, the beast was gone. Regardless, here’s a clip of the incident. You can see the boat lift and water splash over the GoPro from behind. 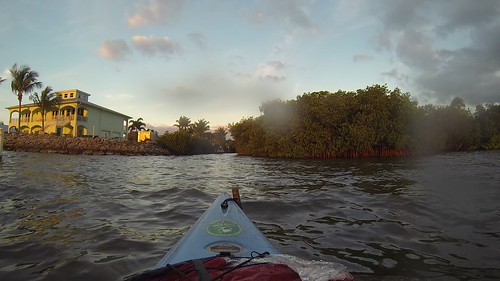 Back in the channel I looked for more manatees, but saw none. I did speak with a man who was doing some work on the property. This had been a nice trailer park before the hurricanes hit about 10 years ago. FEMA trailers were placed on the property for awhile, then it sat abandoned for many years. It became the site of illegal tire dumping. It looks like the property has been sold and the new owners are cleaning up the place, which is a good thing. It’s prime waterfront real estate. 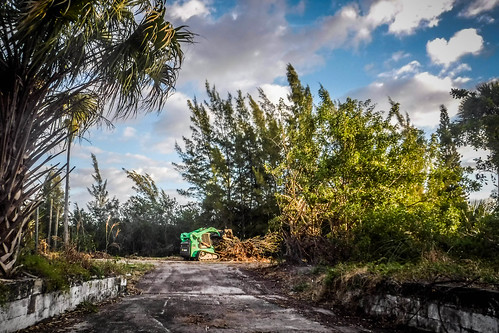 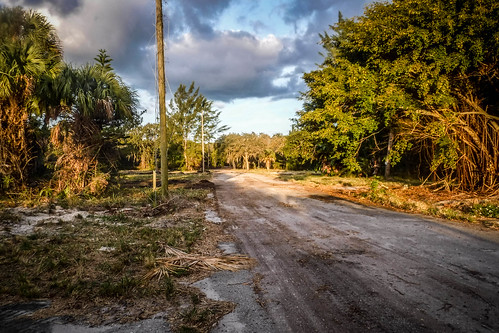 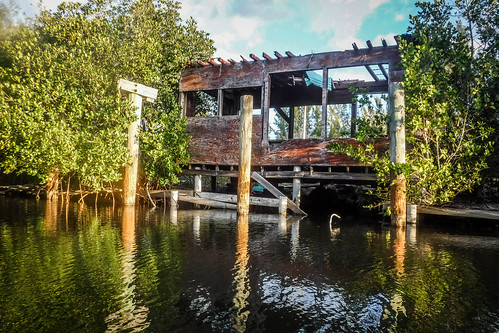 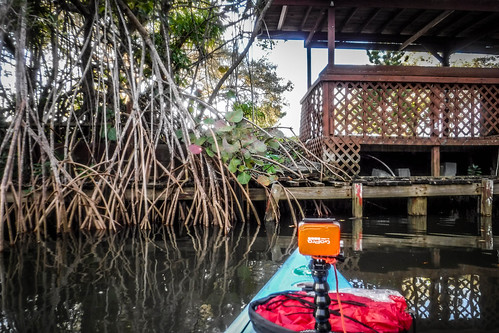 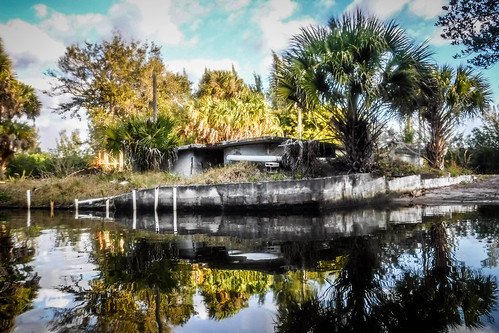 I slowly made my way back out, not wanting to hit any more manatees. The water was still rough, though. This video clip shows how bouncy it got. 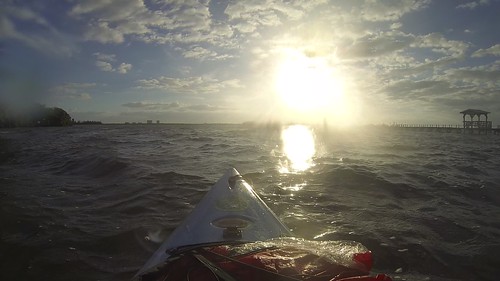 It was fun, though. It reminded me of running standing waves on whitewater. So far, it wasn’t anything I couldn’t handle. Even so, I was glad I had a spray skirt.

The rest of the week passed without much paddling. There were small craft advisories and high winds just about every day. I did manage to take the boat out once more. Again, I got an early start, but not a sunrise start. The winds and tide were still strong, and I struggled paddling south, and eventually across the channel. 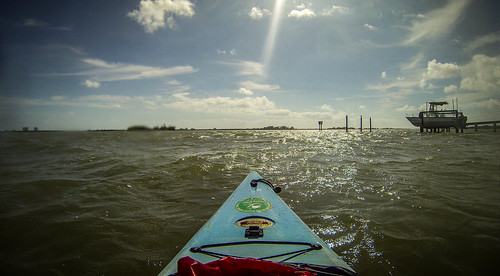 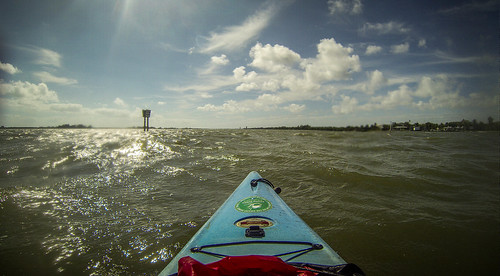 I didn’t take many photos. I made it out to the spoil islands, but it seems that they were very popular on this day. Finally I found some shelter on a small island, long enough to catch my breath and pump the water out of my boat. I watched the passing boat traffic for awhile, then decided it was clear enough to head back across the main channel and home.

This time I was going with the wind and tide, and I had a secret weapon. I had deployed the kayak sail Amy gave me for Christmas. I cruised along. It had taken me about 90 minutes to paddle out to the island. I made it back home in 20 minutes. 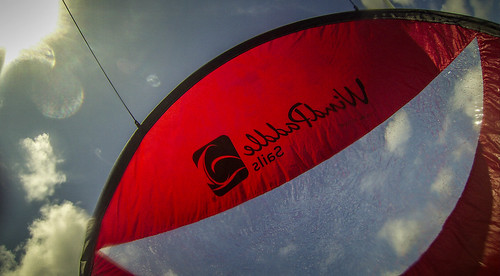 Once again I paddled into the abandoned channel across from Amy’s. I was hoping for another manatee encounter, but it didn’t happen this time. I did find a couple of friendly herons and an old tree house. 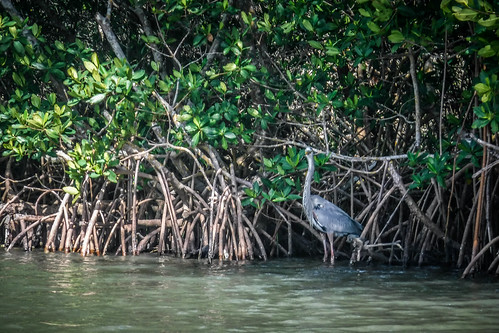 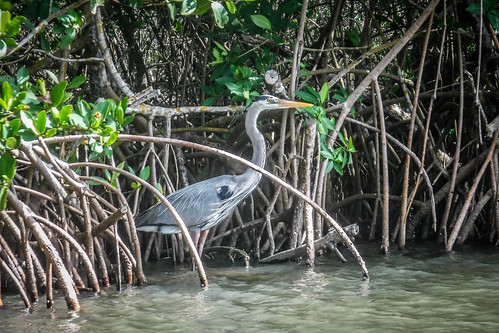 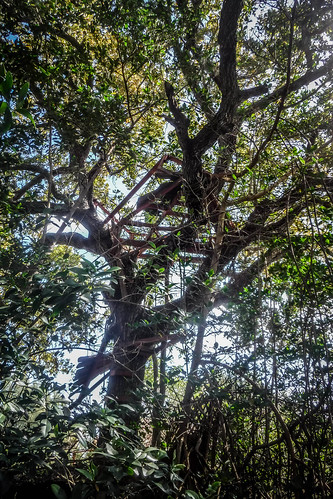 So, that’s about it for paddling trip during spring break – only two excursions out. One of these days I really want to try other venues in this area, rather than just paddling out from Amy’s boat ramp. I think that both weather conditions and family conditions have to align before that’s really a possibility, though. 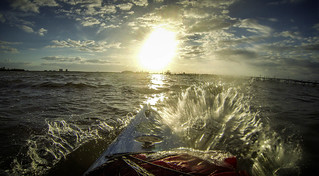