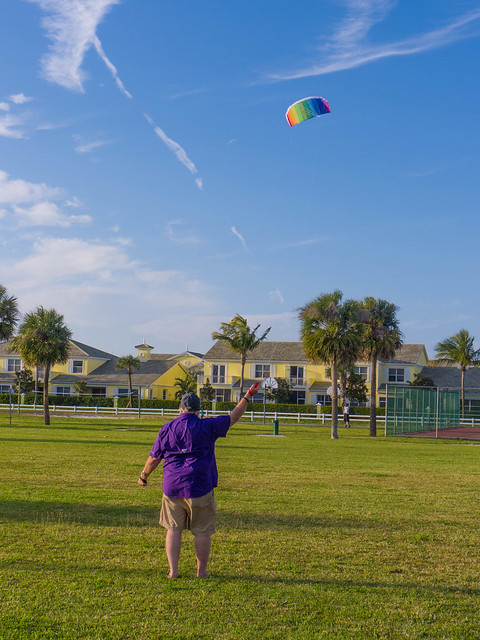 Fair warning – this is going to be one of those posts with more writing than photography. I was otherwise occupied while most of this was going on, so I had to rely on others to take photos. The photos were rare, but there was quality over quantity. I was busy flying kites.

I have always loved flying kites. We have been blessed with easy access to wide open fields pretty much all of my life. Most of my early kites were simple delta models, but I’ve flown box kites and diamonds. I think we calculated that we flew one kite nearly a half mile out, based on the amount of string we had. That string broke and the kite was lost.

Some of our kites were quite extreme. My dad picked up a huge cargo parachute at government surplus one year when I was a teenager. To understand how amazingly big this thing was, they used to strap three of these things to bulldozers and push them out of cargo planes. One particularly windy day we decided that we had to fly it like a super-sized kite.

My brother Houston was in one harness, and I was in the other. My two younger sisters pulled on line, and my dad tried up hold up the fabric so that it would inflate. It never got off the ground, and that was a good thing. It would have taken us with it. One strong gust did catch it, and it filled so that only the bottom part was touching the ground. It stood taller than our two-story house. It also had tremendous pull. Everyone let go except for Houston and me, and we were trapped in the harnesses. It began to drag us along the ground until it hit a tree. What a ride. Photographic evidence exists somewhere, but I’m not sure who has that photo.

In high school I played the role of Charlie Brown in “You’re a Good Man, Charlie Brown.” I remember singing the “Kite Song,” and I still sing it when I’m flying kites to this day.

Over the years there were more kites, but everything changed in 1991. That’s when I discovered two line stunt kites. We were living in Arizona at the time, and there were steady desert winds that helped with kite flying. When we returned home after that year of desert living I was disappointed that the winds in our area weren’t as reliable. I was back to single line kites as my main flying entertainment.

I have visited several kite Meccas. I’ve been to the “Into the Wind” store at the Pearl Street Mall in Boulder, Colorado (and bought kites there.) For many years I got their catalogs in the mail and marveled at the variety (and expense) of their kite inventory. In 2014 we visited Long Beach, Washington, where they hold an annual kite festival. It seemed like there was a high-end kite store on every corner. 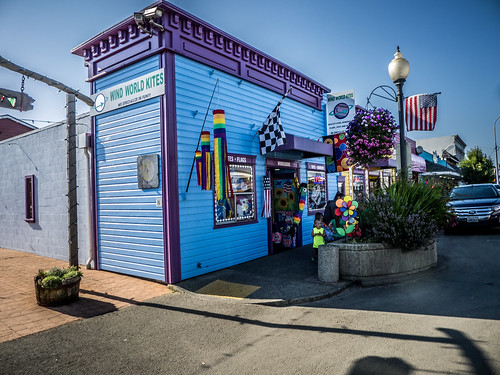 Now we come to the present, sort of.

Over Thanksgiving we made a trip up to Amy’s favorite kite store in Melbourne, Florida. I bought a nice dual line delta stunt kite and decided it would be one I left in Florida for when I was down there. It performed marvelously, and I flew it again when we were back for Christmas.

With the winds so strong over spring break I almost ran into trouble. I was trying to fly the kite on a narrow beach in strong winds, and people kept coming too close to watch. The speed and pull on the kite was so great that I was afraid I was going to decapitate someone, or at least cause serious injury. This happened both at the Inlet Park and at Avalon Beach. I kept flying my kite though, finding safe places where I could.

During the week I found a reasonably priced parafoil stunt kite online and ordered it. It arrived a couple of days later. Amy was home by Saturday, so we decided to take it for a spin at the Jaycee Park on South Hutchinson Island.

I started with the delta kite, and once again it performed perfectly, attracting a bit of a crowd. When I broke out that five foot parafoil, though, it nearly blew me away…literally. The pull was incredible, but it made such tight turns and was so responsive that I’m not sure I’ll ever go back to a rigid kite. Here’s a video shot by Laura… 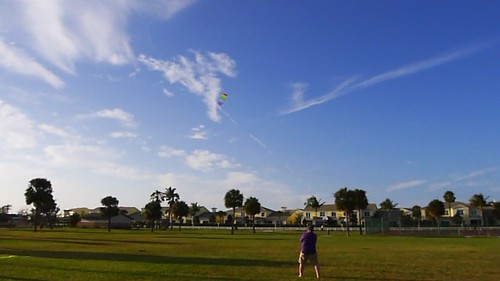 I left the delta kite down in Florida, but that parafoil was coming back with me to South Carolina. I know I can find reasonable winds around here somewhere. I did learn one thing, though…

Stunt kite flying is not for introverts!

When I got home I made a quick inventory and did manage to straighten out my kites. Turns out I have several large single-line deltas, three diamond shaped stunt kites, three delta stunt kites (including the one I left in Florida), the parafoil stunt kite, and a smaller parafoil single line. There were thirteen kites in all. I told Laura I needed on more so that I don’t have an unlucky number. I think you can always use one more kite. 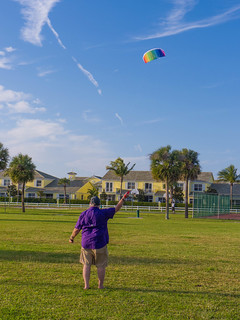