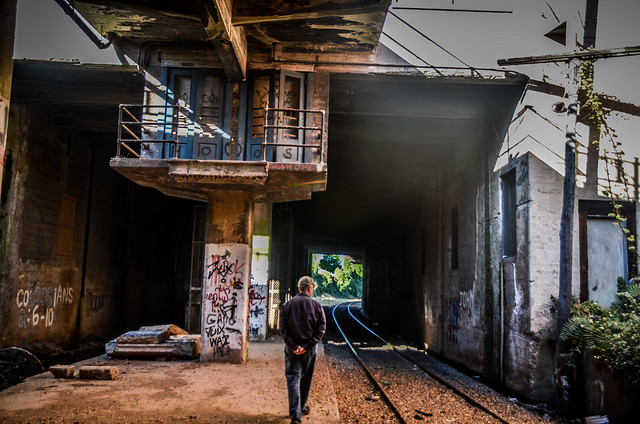 For many years I’ve known about the underground railroad passage in Anderson, South Carolina. The passage hints at a forgotten history and neglected part of the city. I’ve visited the entrances to the passageway several times, but just never got up the nerve to explore it by myself. This past week fellow explorer Alan Russell joined me, and together we finally got a chance to explore Underground Anderson.

We got an early start on a spectacular October day and headed straight to downtown Anderson. First we drove by the the east end of the passageway to see if there might be a good place to explore. We passed an abandoned brick structure. I made a note of a couple of attack points if we decided to explore from this direction.

We crossed Main Street and drove around to a parking area on the west side of the area. This is an area where I’d explored some years back. Murray Avenue crosses the railroad and Earl Street with a single long overpass, creating another sheltered area. We found a spot to park and got out to explore.

At the end of the parking lot is a set of stairs leading up to the Murray Ave. Bridge. We headed up this way to get an overview of our target.

We could see where the rails entered the underground passage through a kudzu-lined valley. With the early sun, the scene was too backlit to get a decent photo. To the east I could see a line of rail cars on a siding. I realized that this was NOT an abandoned rail, as I had imagined.

Back down at Earl Street, the area under the Murray Bridge gave us access to the tracks. On the other side of the tracks there was a homeless encampment, but there didn’t seem to be anyone there. Graffiti covered just about every surface. On our side someone had left an unfinished game of dominoes.

We climbed down to the tracks and followed them through the kudzu valley. I had my GoPro attached to my camera strap to try to catch some video, but it kept slipping.

Underneath the Main Street Bridge there was a concrete pad with columns running down the middle. At one time two tracks ran through this passage on either side of the columns. Now water pooled on the southern side of the pad.

The area was covered with graffiti. Some of it was quite impressive. Others, not so much. In addition to elaborate gang tags there was the typical profanity interspersed with political statements, words of encouragement, astounding artwork, and even an occasional Bible verse.

As Alan and I explore it became apparent that this must have been a passenger platform at one time. The split track reminded me of train stations I’d visited in Europe. We found an abandoned elevator shaft, but the most telling and most dramatic feature was an upper platform with twin folding doors. Behind the doors a concrete block wall sealed the space onto which the doors once opened. A set of concrete stairs once led up to these doors, but their remains now sat on the concrete pad, leading nowhere.

We didn’t see any of the platforms or other accoutrements for cargo handling. I would have expected much larger doors into the buildings. The elevator was so small that it wouldn’t have accommodated much. There was a cage that might have held a luggage elevator, but it didn’t look like it opened to the buildings above as did the passenger elevator. This just reinforced the idea that this platform was for passengers, not for cargo.

There was a gap where sunlight came through, then another long stretch of subterranean tracks. In this stretch there were a few doors that were now no longer accessible.

There was another gap, then the McDuffie Street Bridge. Then we broke out into sunlight.

On the south side of the tracks there were the ruins of an abandoned set of buildings.

In one of the buildings, brown and yellow kudzu leaves covered a window opening. Combined with a wire grid and brilliant blue sky, the backlit leaves looked like a stained glass window. A tree was growing out of another building.

Beyond was another set of buildings that were still occupied and active.

Alan and I made our way back through the underground passageway.

Back on the platform we ran into a…slight problem. A train was coming through the underpass. Fortunately, there was plenty of room for us to step aside while the VERY loud engines passed, stopped, then backed up.

I was surprised to see “Pickens” on the side of the engines. I’d thought the Pickens Railroad was the old “Doodle Rail” from Pickens to Easley, which is now a rails-to-trails project known as the Doodle Trail. Turns out that it is an active short-line railway.

Alan and I made our way back to the Murray Avenue overpass after the train backed up so that we could get by safely. I suspect it was connecting with the cars that we had seen on the siding earlier.

Knowing that this is an active railroad, there’s no way that I’d recommend this spot for casual exploration. It can be dangerous.