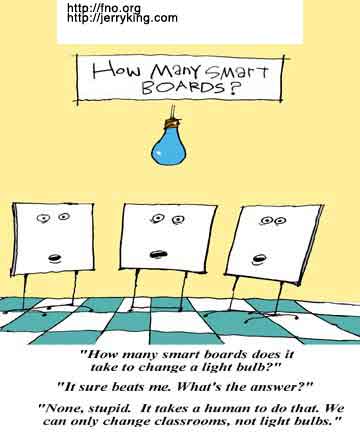 It would seem that interactive smart boards are the latest thing to sweep the EdTech world. Whether it be a SMARTboard, Promethean Board, or some other brand, districts in our area are racing to put these into every classroom, along with an accompanying projection system.

I have mixed feelings about these investments. I was roundly criticized (mainly by vendors of these types of boards) for not including them in the design plans of our newest schools. However, we have had this technology in our schools since 1996. In the intervening ten years I’ve seen an initial flurry as the devices are introduced, then I see usage dropping off. At this point most of ours are being used as glorified computer mice, or, worse yet, simple projection screens.

Don’t get me wrong. If used properly, this can be a wonderful tool for the classroom. However, if not used properly it’s just an expensive waste. If it’s permanently mounted, as these vendors suggested, then it’s a permanent reminder of that waste, as well.

Here’s where interactive tablets come into play. I have just purchased one InterWrite SchoolPad for our district office, and I’m getting ready to purchase a bunch more for the district. Hitachi and Dukane also make these products, but so far InterWrite seems to be the best. The tablets have the same basic functionality as the interactive boards, but they score over the boards on several points.

There are a couple of advantages that the boards have.

Other than these, though, I see no advantage. I guess I’ll get a better idea how these will work once I get the new ones for the district and we have training with our teachers. I’m just hoping that these doesn’t just turn into expensive mice, too.