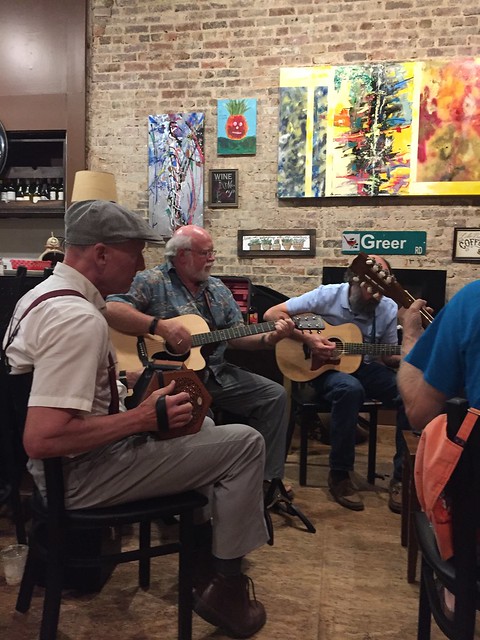 There was a time when I was directing the music for two different churches.  I was rehearsing with several choral groups and finishing up my Masters degree, and singing the title role of The Mikado with the Greenville Savoyards.  I had some sort of rehearsal three or four nights a week.  Laura complained about being a “Choral Widow.”  She had a point.  This past week I had just about as many musical events and she once again felt like a music widow.  However, I do have a strategy.

I’ve pretty much abandoned the Pickens Flea Market/Perryville stuff.  I may do the occasional Upstate Acoustic Guitarists jam session, but they tend to focus on solo performances at open mike sessions.  I’m not there yet.  Instead, I’ll do the Celtic and Old Mountain sessions at The Stomping Grounds with alternating Old Mountain sessions in Hendersonville with FBVMA.  My plan is to hit these three groups pretty hard and heavy for the first couple of months until I establish myself as a regular, then I’ll scale back.

But, for now, I’m in the “hard and heavy” part.  This past week was typical of my alternating weeks.

Greenville Chorale rehearsals started back last Monday.  For this fall concert we’re doing another Bluegrass Mass.  The last one we did was a couple of years ago with the Chamber Ensemble.  That work, by Carol Barnett, featured completely original music, and didn’t really follow the traditional mass format.

The piece we’re doing this time is by Tim Sharp and Wes Ramsey and does have more traditional mass elements such as the Kyrie, Gloria, Credo, and Agnus Dei.  However, they have included folk and Sacred Harp hymns such as “Brethren, We Have Met to Worship” and “What Wondrous Love Is This?”  The Chuck Nation Band will accompany us on this work.

Also on this concert we will be doing Duke Ellington’s Sacred Concert with the Greenville Jazz Collective.  Even after one rehearsal the piece was coming together quickly.  As much as I’ve enjoyed my other musical experiences, it felt good to be back singing choral music.

Tuesday was another session with Bob Buckingham at The Stomping Ground.  It was very much like the last one, with Bob taking the lead.  There was one other guitarist this time.  She felt the need to tell me about her doctorate in folk music, but eased up once she realized that I do, in fact, know my stuff.  Once again, Dan was playing banjo.  He had been up in Hendersonville, so this was our third gig together.  In all, it was another fun evening.

I think the folks at The Stomping Grounds are going to get to know me very well.  This was the second consecutive night I’d been there, this time for the Celtic session.

As I got my instruments out of the car two young women with ukulele cases saw me and said, “You’re back!”  I didn’t recognize them, but I smiled and replied that I was.  I commented on their instruments, and we headed inside.  However, when we started setting up, they quickly left.  They had mistaken me for someone else and they thought this was ukulele night.  They obviously didn’t know that the group had disbanded.  That’s a shame.

As for the the other players, we had a mandolo, button accordion, rhythm bones, concertina, and one other guitarist.  I felt much more comfortable in the setting, suggesting tunes and playing along.  The tunes I suggested were on tin whistle so that I could play melody.

I think I enjoy the Celtic music much more. But it takes some ear training to discern between Celtic music and other similar music. The harmonies and rhythms are much more intricate and interesting than the mountain music.  I was completely into the music.

And I had guests this time.  Mark Elbrecht dropped by, then my sister, Glynda surprised me by stopping by to listen.  Glynda took a couple of photos.

Mark also took some photos but also posted some videos to YouTube.

Three music events in one week may be a bit intense, but I enjoyed all of them.  I will have to decide which of these I’m going to pursue so that I don’t completely abandon Laura.