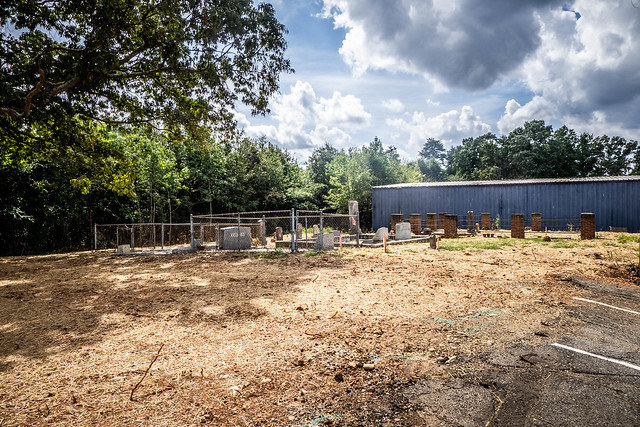 On North Pleasantburg Drive near Worley Road there once was a local dive called the Radio Room.  It was either a din of iniquity or a cool place to hear up and coming bands, depending on with whom you spoke.  The Radio Room has relocated into more respectable digs in the Auld Hardware building on Poinsett Drive and the old building has been demolished, revealing a once-hidden cemetery.  Of course I had to explore it.  In the process I found a collection of fascinating people that had been part of the Turpin/Raines Family that were early settlers of Greenville.

I’ve driven by this spot for years and years.  I’d know about the shady dives all through the area.  This view from Street View was what one usually saw when driving along North Pleasantburg.  The Radio Room is on the left and a tire shop sat at the intersection of North Pleasantburg and Worley Road. 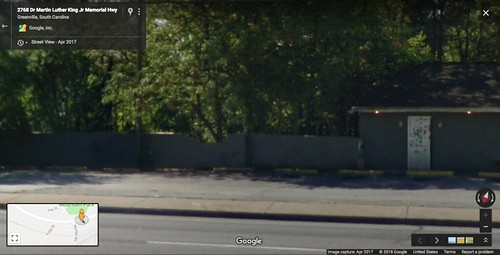 In the year that we were away both of these buildings have been torn down.  A new dentist office now occupies the spot at the intersection.  The removal of these buildings revealed an old cemetery, hidden by the building, a wooden wall, and overgrown vegetation.

I located the name of the cemetery through Find-a-Grave, which identified this as the Raines Family Cemetery.  It listed 24 identified and photographed graves.

I drove by on a Friday with plans to visit, but there were a couple of trucks parked there and what appeared to be workmen looking at the lot in front of the cemetery.  I kept going, planning to come back the following Sunday morning when it would be less likely that there would be anyone there.

My plan worked and I had the place to myself.  I parked out front and wandered over.  The land had been cleared and mulched with grass planted, and it looked like someone was taking great care to recover the cemetery.

As with so many of these family plots there was a range of dates.  There were some unmarked graves and field stones.  Given the number of flags identifying grave sites, it looks like the 24 identified on Find-a-Grave represent only a small number of the actual graves.

The latest internment that I spotted, and that Find-a-Grave confirmed, was from 1982.  The building housing the Radio Room had been on North Pleasantburg for as long as I can remember, so that means this burial probably took place while the cemetery was still hidden away.

Given the proximity of the cemetery to the bar, I can only imagine the amount of abuse this sacred place has endured. Had they known about it, I’m sure the patrons would have come up with tales of the place being haunted.  At the very least I’m sure beer bottles and cans as well as other trash got tossed over the wooden wall and into the cemetery.

I was curious, so I checked Google Earth.  The imagery only goes back to 1994, but that shows the Radio Room building in place with parking back behind and right up against the cemetery.

But back to my visit…

Other surnames in the cemetery included members of the Turpin Family.

It appears that Thomas J. Turpin was the patriarch, and that the cemetery was once referred to as the “Turpin Cemetery.”  According to Find-a-Grave his parents are buried in the Christ Church Episcopal cemetery downtown.

A cemetery is not just a container of remains, but a reminder of the lives  once lived.  These individuals have stories, and I wanted to know more about this family.  Who were the Raines and the Turpins?  Usually a family cemetery is on or near the family home place.  Where did they live?

I wanted to know more about her life and her story.  Another was Ensign Thomas Raines, who died in 1945, most likely a casualty of World War II.

One of the most intriguing stories was that of Samuel A. Turpin, son of Thomas J. Turpin.  At a time when such a thing was unthinkable, he was involved in an interracial relationship that produced a son.   It is thought that he might have been murdered.  Regardless, his life was cut short.

To answer these questions I delved into research, but the best help came from the family itself.  I posted some of the above photographs on the “Greenville Natives” Facebook page.  I got multiple responses and comments, then finally had a conversation via e-mail with Joey Cartee and Kevin Abernathy-Cornelius.    They sent me a link to the Raines Family Facebook Page, which had loads of information about the cemetery.  Kevin had also been doing extensive research about the Wallace Family and sent information about that branch of the family.

Joey and Jeff Cartee have been instrumental in cleaning up the cemetery.  Kevin discovered his roots in the family after a DNA test.  Kevin is a descendent of Samuel Turpin.

With their information I was able to piece together a few answers to my questions.  The Turpin Family actually predates the Raines Family as far as the cemetery goes.  The Turpin Family were early settlers in the area, and previous generations were buried at Christ Church Episcopal.

Thomas Turpin had two children, Samuel and Virginia.  Virginia married James Henry Raines, which is where that surname enters the picture.  The family home was located around the corner from the cemetery.

According to Kevin’s research, Samuel had a relationship with his father’s servant, Jessie Hammett.  Samuel and Jessie had a son, George Wallace Hammett.  In that era an interracial child was bound to cause problems.  On some of the census listings, Samuel himself is listed as racially mixed.

Samuel and Jessie could never be married, so at some point they parted ways.  Jessie moved to Atlanta and married Simon Woods, where they had a daughter.  George Wallace Hammett eventually moved to Ohio, where he died in 1947.

As for Samuel, he died at the age of 35 in 1888 under dubious circumstances.  His headstone, in fact, is the oldest in the Raines Cemetery.  Samuel drowned in a millpond.  He was a known drinker, and his death was ruled as accidental.

Kevin has gathered evidence that the drowning was not accidental, but that Samuel Turpin was perhaps murdered.    There is no conclusive evidence, and Kevin says that we may never know the whole story.

However, this story has a happy ending.  Through Kevin’s research and DNA testing he discovered his connections to the Turpin family.  He made a visit to Greenville to meet his long lost cousins.   Here Kevin and Joey pose for a photo while holding “The Family Horn,” a steer’s horn with the family names inscribed.

Sadly, I wasn’t able to find any additional information about Eva Raines, other than the fact that she lived a very long life.  Perhaps I’ll come across more information later and will update this post.  (Information like, oh, say, miscalculating her age.)

However, the family reconciliation and the restoration of the cemetery are great stories in and of themselves.  Kevin’s research has been excellent, and Joey and Jeff’s efforts to reclaim the cemetery have made it so that others can now see and pay respects to this remarkable family.

8 thoughts on “A Hidden Cemetery on Pleasantburg Drive”