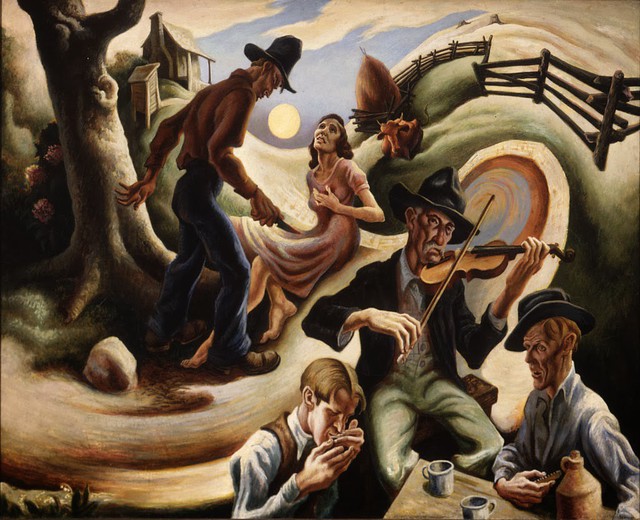 The Ballad of the Jealous Lover of Lone Green Valley – Thomas Hart Benton, 1934

My brother Houston and I have been working on the song “Ain’t No Grave Gonna Hold My Body Down.”  As I was humming it I found that it fit nicely with the old song “I’m Just a Poor, Wayfaring Stranger.”  The two match harmonically, melodically, and thematically.  I tried to put them together as a medley at our last Pickens Flea Market gig, with varying degrees of success.  The most striking aspect of these tunes is the opening phrase, where the melody seems to linger on the fifth of the scale tone.  I’m calling this “The Hanging Fifth.”

Here’s the traditional song “Wayfaring Stranger” in the key of D minor.  Notice how the word “poor” is held for over four + 1 beats on the fifth scale tone in the opening phrase.

Johnny Cash popularized the song, but Houston and I like the version by Crooked Still better.  Here’s the whole song where you can here those opening notes over a string accompaniment.

That opening hanging fifth tends to add to the long mournful sound of the piece, especially in a minor or modal scale.  I started to wonder if there were other songs that had this characteristic.  It turns out there are quite a few.

Many years ago I wrote a jazz piano arrangement of George Gershwin’s “Summertime” from Porgy and Bess, and this was the first one that came to mind.  Even though the song is a lullaby with calming lyrics, the overall melody feel matches that of the spiritual “Wayfaring Stranger.”  My arrangement and Gershwin’s version were in C minor, but I’ve transposed it to D minor in this example for comparison.  This one starts on the upper fifth.

There are other examples from groups in the new folk movement such as Delta Rae, The Dead South, and others.  Here’s Delta Rae’s “Bottom of the River” which has a hanging fifth on the phrase “Hold My Hand.”

The Dead South’s “In Hell I’ll Be in Good Company” starts on the fifth then king of hangs out there.

One of my favorite songs to sing while kayaking is Grace Potter’s “Nothing but the Water.”  The verses have the Hanging Fifth, but the chorus is different.

I wanted to find more examples so I posed a question to Reddit.  I got a couple of responses, but I found this thread on Ask Metafilter to be even more helpful.  I was able to generate quite a list of songs with the Hanging Fifth characteristic.

It seems that this Hanging Fifth pops up quite a bit in two genres of music – spirituals and Appalachian murder ballads.  It also occurs in blues, but I’ll focus on those first two.

“Ain’t No Grave” and “Wayfaring Stranger” certainly fit the category of spiritual.  Another good one is “John the Revelator.”

Another good one is “Nobody’s Fault but Mine,” covered by everyone from Blind Willie Johnson to Led Zepplin.  Here’s a version by Sister Rosetta Tharpe.  This one leans more toward the Blues, though.

There seem to be quite a bit of these Hanging Fifths in the Murder Ballad genre.  The first one that pops into mind is “Little Sadie.”  This one is a little different because it starts on the fifth of the scale tone and rises.

Thinking about the murder ballads is what gave me the idea of the “hanging” fifth.  While not a murder ballad, “Silver Dagger” certainly fits the long lonesome sound of the Hanging Fifth.

Here’s another good one – “Deeper Well” as recorded by the Wailin’ Jennys.

That hanging fifth can serve a harmonic purpose.  It allows chordal movement underneath while the tone is sustained above.  In my arrangement of Summertime underneath the Hanging Fifth I played a I-V7-I progression, with the V7 in the third inversion and the second I in second inversion.  That also gives it a nice ascending bass line, eventually winding up on the subdominant as the melody progresses.  This works quite nicely for blues.

But, on the less technical side…

Now when I hear this opening Hanging Fifth it really sticks out.  To me it adds tension to a mournful song.  It’s an effective composition tool rooted in a long tradition.

UPDATE:  After posting this I went to my Old Mountain Music Session at The Stomping Grounds in Greer.  Bob Buckingham played and sang a song called “Reuben’s Train” or “Long Steel Rail” which follows the Hanging Fifth pattern.  Amy Buckingham is on fiddle and Dan the Banjo Man is on …well, banjo.