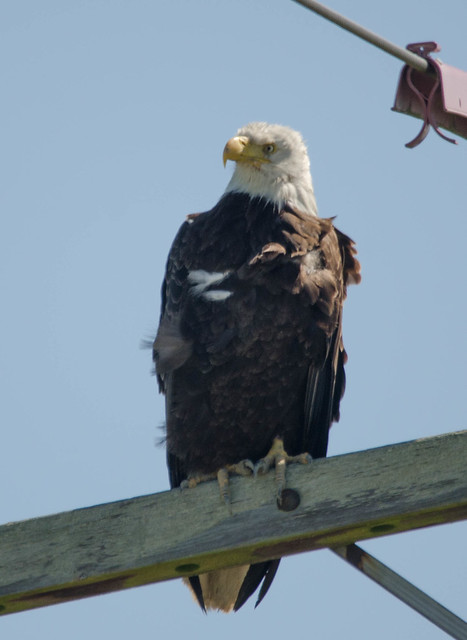 That term has been tossed about quite a bit during this election cycle. As I understand it, it’s the tendency to only listen to those things that support your preconceived notions, and to disavow any evidence to the contrary. I’ve certainly seen that happen, and the speed of media has simply increased the divisiveness created by such echo chambers. Even so, I’ve decided to create my own echo chamber, and here’s why…

I participate in social media for two reasons – first, to tell my own story, and second, to keep up with family and friends. I was on Twitter before I was on Facebook, and I’ve been blogging longer than I’ve done either of those two things.

As for Twitter, I didn’t care about following people, or even visiting the site for updates. To me it was an easy way to put quick updates on this website without having a full-blown blog post. At the time, my Twitter feed appeared in a sidebar. Now just about the only thing I Tweet is when I have a post here, so id doesn’t make sense just to echo that in the sidebar. I still rarely visit the site to see what others are tweeting. The types of things I used to put on Twitter now seem more suited for Facebook.

I joined years ago solely to keep up with friends and family. I want news of their lives. I want to see the pictures. I want to communicate with them. I have absolutely no use for anything that interferes with that main mission, especially politics. Sadly, some of my friends and family have not learned that you cannot, cannot, cannot ever change someone’s mind regarding either religion or politics. 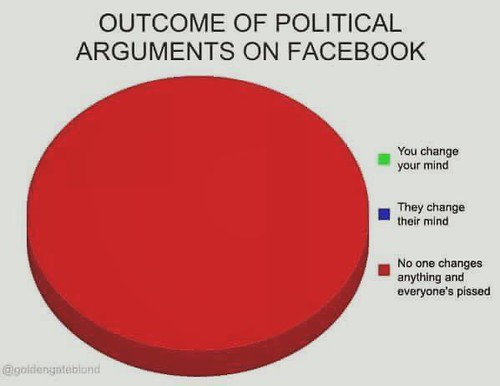 Sadly, even the graph above created an argument that resulted in someone being blocked by me on Facebook. Go figure. I don’t drop people lightly. I’m more than willing to disagree and move on. However, I have had to develop some coping strategies.

First, I despise memes of any ilk. They are subject to wild distortions, but passed along as truth. Back in the day we had forwarded e-mails. Now we have memes. Yes, I’ve shared a fair few, including the image above. Yes, I’ll probably share others that strike my fancy. I’m not immune. However, I don’t make that the bulk of my contribution to Facebook. Original thoughts, ideas, photos, and news are what I strive to contribute.

In dealing with memes and political discussions, this hierarchy has been helpful. Please note that I use this strategy regardless of whether the meme is political, religious, or if someone is constantly trying to sell something through their Facebook feed. I use these strategies indiscriminately, regardless of whether it’s a close friend or family member. I also use this process in handling multiple friend requests based on my activities.

That may seem a bit harsh, but I find it necessary. I hate even having to unfollow someone, because then I miss out on the family news that might be interspersed with the garbage.

Let me give you a couple of examples. Case #1 – There was an individual with whom I’d gone to high school and college. I hadn’t seen him in 30 years, but we became friends on Facebook. My only interactions with him seemed to be him challenging me on any political opinion I expressed. It didn’t even have to be political, but was somehow twisted into such. I unfollowed, but the comments continued. Since this seemed to be the only type of interaction we had, I unfriended him.

Case #2 – an unusual and particularly sad case for me. A close friend that I’ve known for years seems to have crawled out of the political woodwork. We’ve had many adventures together and I thought we got along. This individual has been living in China and has just recently gotten back on Facebook, and I don’t think he understands the mechanics of Facebook. He never challenged me directly. However, if I liked someone’s post, he would make offensive comments and would engage in name calling, even though he didn’t know that person. It got to the point where he had pretty much pissed off all of my friends that didn’t think like he did. Unfollowing and unfriending wasn’t going to work in this case because we still had so many mutual friends on Facebook. Sadly, I blocked him.

The upcoming election has just exacerbated the situation. One of Laura’s former students, now a PhD chemist and lawyer, probably had one of the best Facebook rants, so I’ll quote him here:

Has anyone NOT made up their mind about which presidential candidate to vote for? Is anyone actually having trouble deciding? I doubt it.

So can we please stop trying to convince each other, because we won’t succeed, and the “dialog” is unproductive (you goddam self-righteous, contratemptuous, bloviating know-it-all facebookers), and hurtful, and you don’t really want to know what your otherwise reasonable friends think about this, or that, or the other issue anyway, which is why my parents taught me that politics, religion, and farts are things best kept to oneself.

Some might say that by refusing to argue I automatically give the other side a win. Bullshit. I still vote, and I will vote my conscience at each available election. I will gladly give my reasons for the way I vote in a reasoned, non-combative forum when asked. Some might say I’m not open to reason. Again, bullshit. The type of garbage I see on social media has nothing to do with reason, and everything to do with emotion, or preaching to the choir. I just don’t have the time and energy for that. I think “echo chamber” is perhaps the wrong term. Perhaps “noise cancelling headphones” would be a better metaphor.

So, if you want to share photos of your travels, your kids, your pets, etc., or you have something witty to say, or news about your life, whether good or bad, I will gladly listen, react, sympathize, and do all those things which social media SHOULD illicit. Please, just don’t try to sell me something, whatever it is.

Finally, on a more personal note, we have been dealing with some major family issues. Right now I’m in Washington State helping take care of some of my mother-in-law’s business at her house. That’s another reason I need as little noise as possible. This place is so peaceful, and seems far removed from the bruhahah. Next post will be pretty pictures of scenery and/or kayaking. I promise. 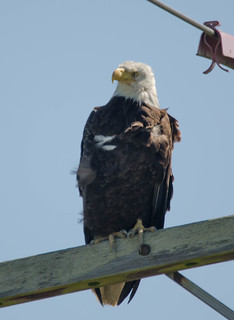 3 thoughts on “The Echo Chamber”