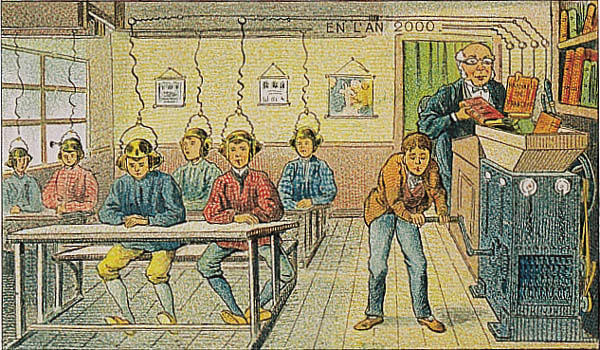 BoingBoing featured a link to a collection of French art from 1910 which was supposed to show life in the year 2000. As with most futuristic art from that period, the artist took the familiar and extrapolated what it would become. As with other collections of this sort, some of the images are eerily prescient, such as the two-way video communication scene. Others are more fanciful, featuring hovering men with bat-wings, etc. Steam power seems to be the major mode of power in these illustrations.  I especially like the image of a classroom as seen above.

As I looked over the collection, I thought about other collections of futuristic art, some of which I’ve written about here. This made me wonder about the current state of things. Where are today’s fanciful drawings of life in the year 2100? Are we so jaded by technology or dismayed by things such as global warming and continues wars that we can’t envision a grand, glorious future? Perhaps so. However, I think its the medium that has changed more than anything. Today’s visions of the future are more likely to be found in movies and television rather than printed illustrations. But again, there are more images of conflict than of a bright tomorrow, and perhaps that is more distressing than anything.

One thought on “That Grand, Glorious Future”