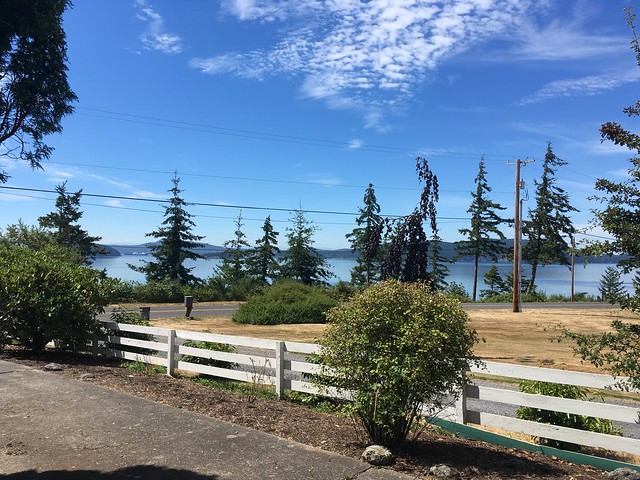 We have just finished our first week on Samish Island in Washington State. We had made plans last spring to come up here when Laura’s summer research ended and spend some time working on her mom’s house. It’s a chance to relax and recharge, but also to take care of some family business. So far the weather has been spectacular, and has been a welcome break from the sweltering heat of South Carolina.

When I show folks a map of Samish Island, the first reaction is always, “Well, that’s not an island!” 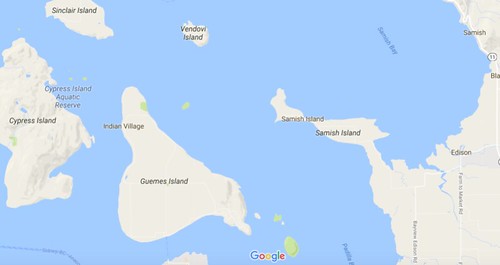 True. It is no longer an island. However, a flat map like this doesn’t show the true nature of the terrain. As you approach the island from the flat farmlands, it’s very clear that you’re entering a different zone, as seen in this Google Streetview image:

Samish was an island by virtue of a slough that ran through the marshes around the island and connected Samish Bay with Padilla Bay. Starting in the 1870s the marshes were drained to create farmland. This 1897 map shows the slough and Samish as a true island. 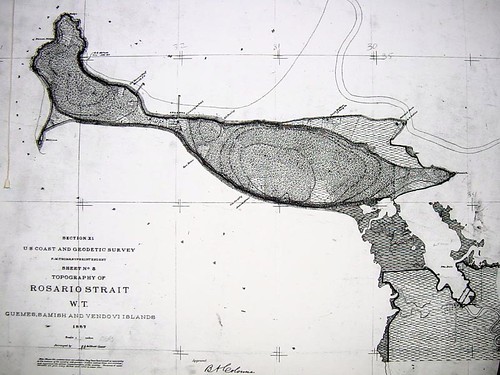 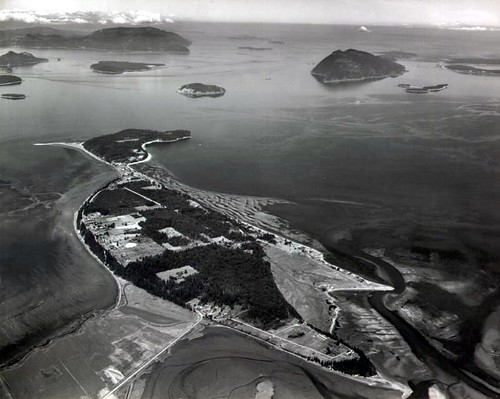 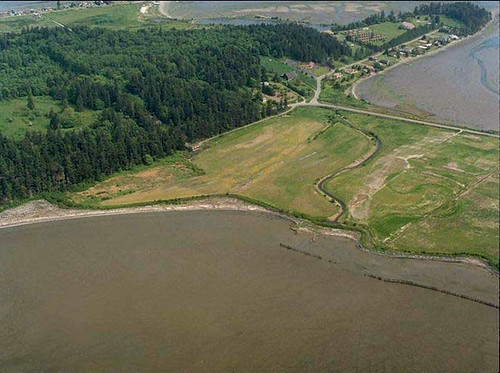 The website shows that in addition to the farmland, interesting things have been proposed for the island. In post WWII there was a plan to put a nuclear power plant on one end of the island. Fortunately, that never came to fruition. In the 1950s there was another ambitious plan to completely drain Padilla bay and turn it into an industrial park. 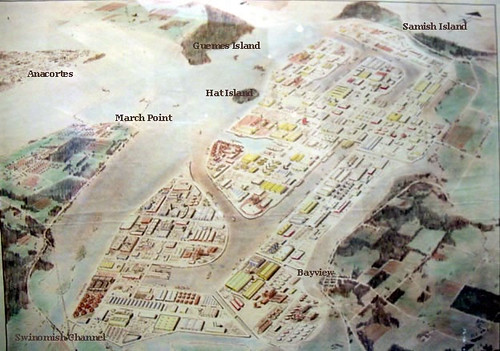 That certainly would have ruined these views from the road in front of the house. 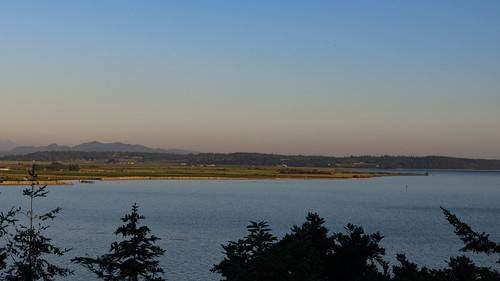 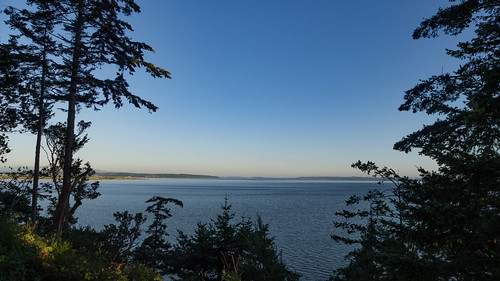 The island is now a very peaceful place, far removed from any of the local towns. One has to drive anywhere from 15-20 miles to get to a store, so it’s important to plan ahead. Water and facilities are somewhat limited on the island, so that does put a cap on growth. However, folks with money have been discovering the fantastic views. On the north side of the island are some huge mansions, and traffic on Samish Island Road has increased. There are more No Trespassing signs for areas that neighbors and long-time residents used to share in common. Oh well. 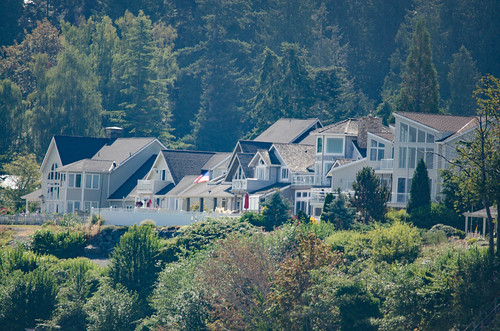 Laura never lived here on the island. Her parents moved up here in the early 1980s while she was doing post-doctoral studies at the University of Colorado. Mr. Wright loved fishing, and when he retired from Hughes Aircraft they bought this place where he could fish for salmon, and made the move from Los Angeles. Originally they had planned to built a new house on this plot, but decided that the modest double-wide trailer that was on the property was plenty for them.

My first visit to the island was in 1988. It was also my first time meeting Laura’s parents. We were already engaged, but I hadn’t met them. It was a bit…tense, at least for me, at first. Fortunately, they were very gracious, and put me at ease. Some of my fondest memories of that trip were setting out crab pots in the bay in Mr. Wright’s small boat, then retrieving them later that day. That was some of the best Dungeoness crab I can ever remember eating. Each year, if we’re here at the right time, we’ve tried to get some fresh crab.

…as for our current trip…

This first week has been more vacation than business. We spent a day or so getting things spruced up. Our neighbors, Duff and Linda, do a fantastic job of keeping the place maintained when we’re not here, but there’s always restocking, etc, when we arrive. We found cupboards of old cans and food that had to be thrown out – no telling how long it’s been here. Completely cleaning the kitchen will be one of our priorities for this trip.

In addition to the chores, we visited the tourist town of La Conner and had a nice lunch, then browsed the shops. Since our last visit the town has built a wonderful boardwalk called the Channel Passage along the Swinnomish Channel. 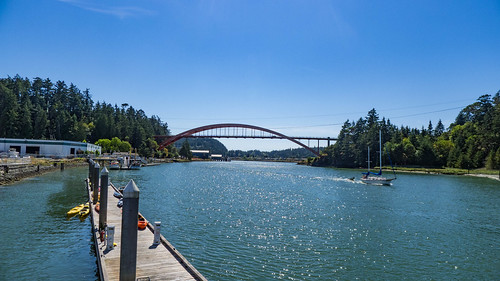 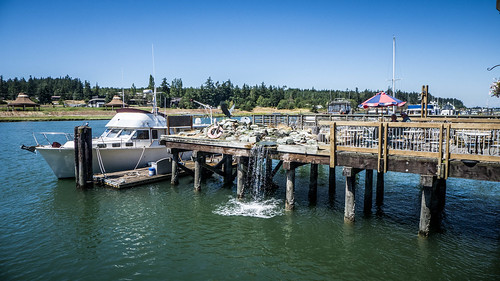 Laura’s friend Casper Wright (no relation) also came to spend a night with us. We took trips up to the Cascades and took a ferry ride, but I’ll write more about those later.

Mostly, though, we’ve been enjoying the peace and quiet of the island. I tried my hand at some star photography, and even spotted a few meteors (though I didn’t get any photos of them.) 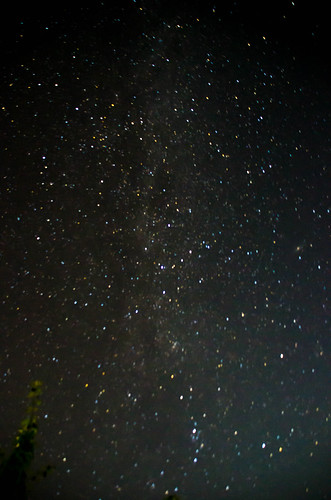 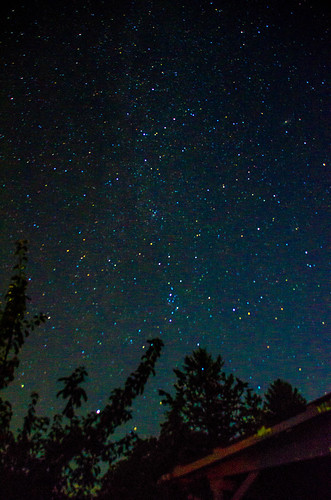 Even though light pollution is starting to build from Anacortes and Mount Vernon, it’s nice being in a place where we can still see the Milky Way.

I’ve slipped off to take photos around the island and from the flats and farmland in the Skagit Valley. 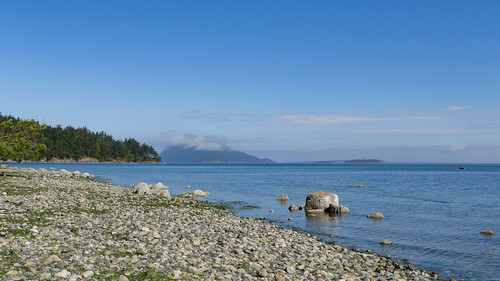 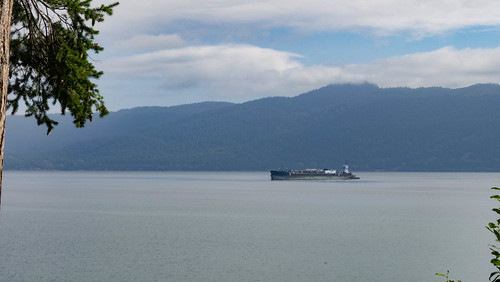 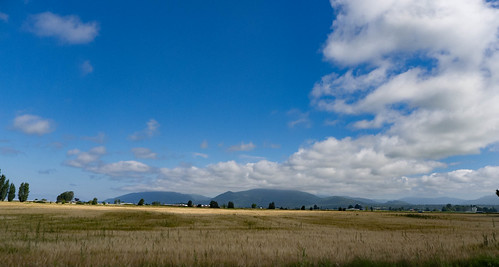 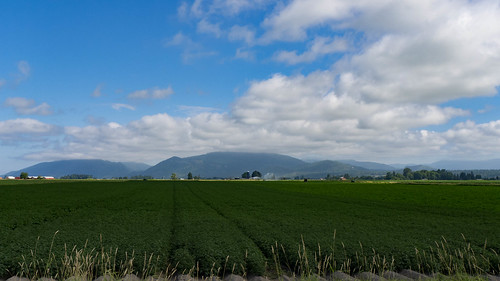 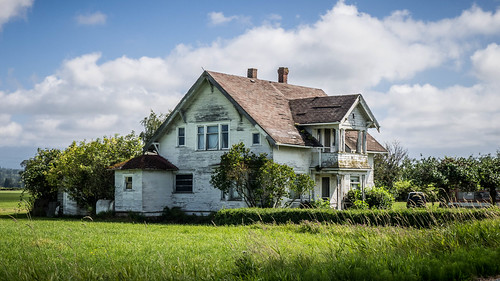 We have no Internet up here, apart from using our phones as a hot spot, so I’ve had to limit photo uploads and blogging. In a way, that’s been kind of peaceful, too. However, I have taken lots of photos from our excursions over the past couple of days. Those will be in the next couple of posts. 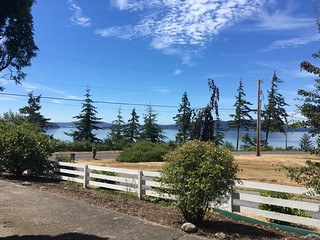