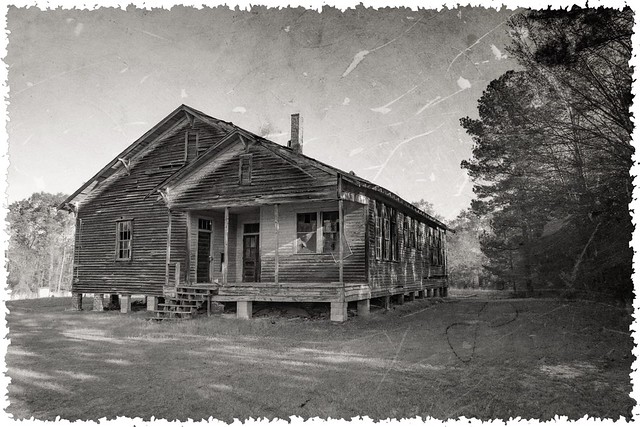 Glynda was at our house for dinner and we were looking out the back picture windows with a view of our lake. She made the comment that everything was getting green so fast. We were almost past the point of winter rambling, where vegetation doesn’t obscure the hidden treasures on backwoods roods. We decided it was time for one last photo trek before the leaves set on in earnest, hiding old buildings and other items of interest. Our target area would be Newberry County and parts of Saluda County.

I made my usual trip preparations – recharging camera batteries, scanning Google Earth and Facebook for possible targets, and loading up my GPS with points of interest. My POIs for this trip included several old schools, some of which I’d missed for whatever reason, along with several historic churches and cemeteries.

We got an early start with breakfast at Bill and Fran’s in Newberry. I’ve eaten so many times here in the past several months that I’m starting to feel like a regular. From there we cut across the southern part of Newberry to our first target of the day. In route we passed an old school I didn’t even have in my POI list. We had to pause for a couple of photos of the old Hartford School, now a community center in excellent shape. 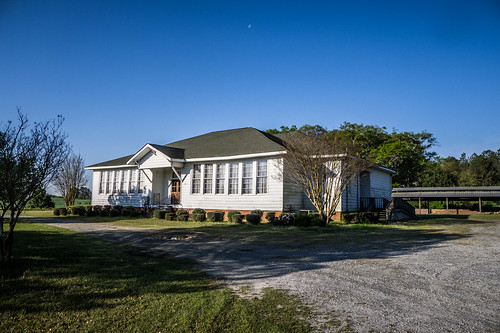 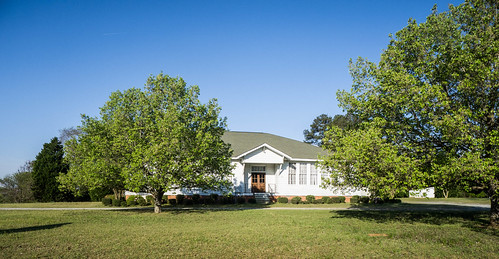 Hartford School was established by the Universalist Church in 1870, and the current structure was built in 1924. I found lots of references to it in Chronicling America, including this ad for teachers for the school. 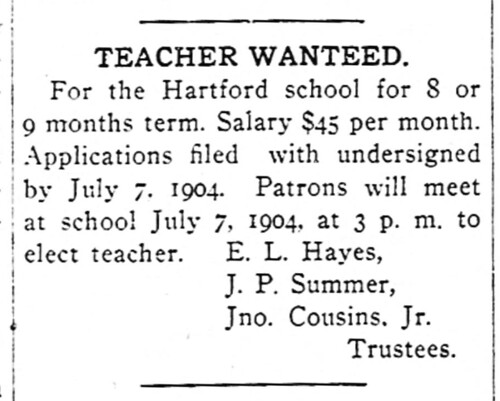 Oddly enough, Fisk University lists the Hartford School as having received Rosenwald funds. It’s important to remember that both Black and White schools received funding from Rosenwald. Those from Black communities seemed to have survived longer because they were in use for much longer, as newer schools were constructed for the White communities. The building is listed as a two-teacher school, but it isn’t one of the classic Nashville designs.

Our first actual target, though, was a school constructed about the same time as Hartford, but nowhere near as well preserved – Hannah Rosenwald School.

This location was the inspiration for this trip. Someone had posted a photo of the school to the Abandoned, Old, and Interesting Places of South Carolina group on Facebook and had misidentified it. They called it a “church” because there was a cemetery back behind it. Recognizing the architecture, I made the comment that it had to be a Rosenwald School, and that these schools were often on the same property as the churches that had fostered them.

At first I thought this was the Howard Junior High School, aka Shiloh School in Prosperity. However, when later comments provided the street address, I realized this was a school I had not visited. A Rosenwald School I had missed in Newberry County?? How could that be?

Glynda and I found the school just past the intersection of Deadfall Road and Highway 395 in the Deadfall Community. Even before we got to the school the old country service station at the crossroads caught our attention. 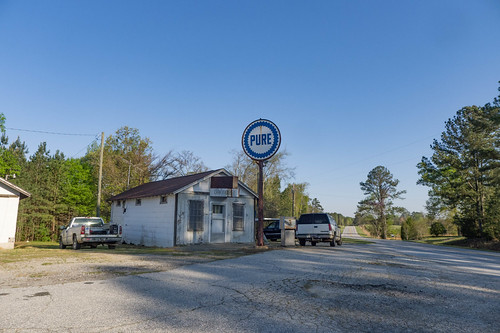 The school was built circa 1924 right across from the present location of Hannah AME Church. Originally the church and school were located side by side, but a new sanctuary for the church was built across the street. 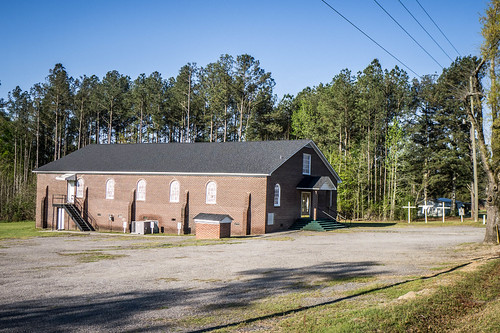 The school is located near the older part of the cemetery, which is why, I guess, the Facebook post incorrectly referred to it as a church. I walked around it taking photos. 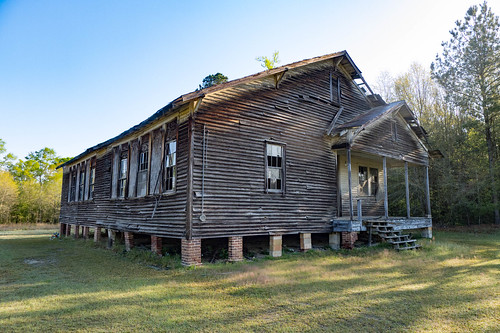 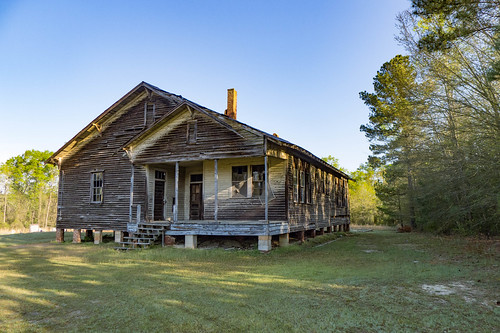 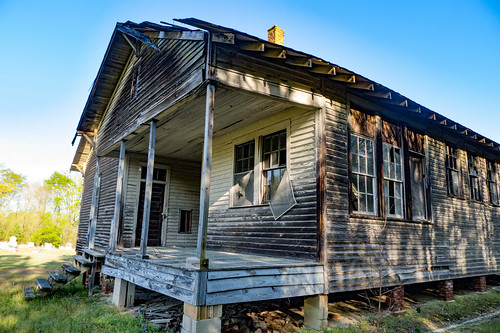 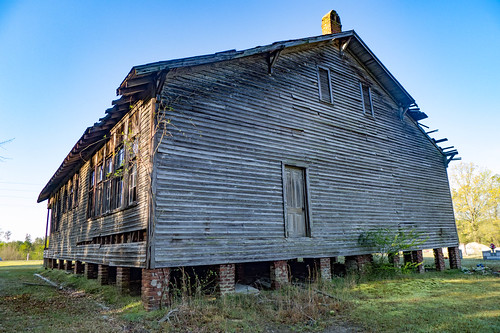 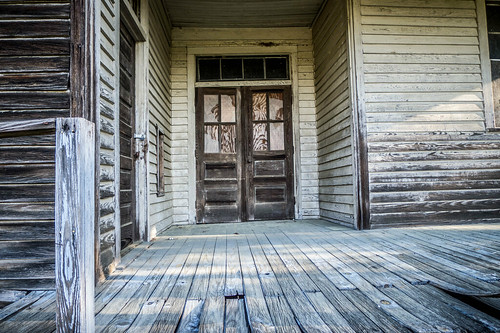 The school wasn’t in great shape. Gingerly I stepped onto the porch, hoping to get a photo of the interior. Many of the boards were sprung, and I stepped lightly following nails that marked support joists. Alas, I wasn’t able to get a decent shot inside. I probably could have if I’d gotten my GoPro on its selfie stick, but I didn’t go back to the car for it.

According to its listing on the National Register of Historic Places, this was originally known as the “Utopia School” after the surrounding community. I guess Utopia sounds better than Deadfall. However, this is where things get murky for me as a researcher. In the Fisk Rosenwald database there is a listing for a “Deadfall School“, which is described as a four-teacher school. There is also a listing for Utopia School, and that describes it as a three-teacher school. Sadly, the Fisk data doesn’t include any location information – just a brief description and funding amounts. GNIS data shows Utopia School about a mile from where we were, but that data has been known to have errors, too. Confusing.

A bit of further research shows that the Fisk Rosenwald information and the National Register listing (and, subsequently, the SCIWAY.net listing) are incorrect. Utopia School and Hannah School ARE NOT the same. The Fisk listing has the incorrect name for the school, and National Register and SCIWAY used the Fisk data as a reference. A 2009 WTDK Roadtrip listing states the following:

Down the road on the left is New Chapel Methodist Church, founded in the first decade of the 19th century. New Chapel marks the beginning of Utopia community. It was named by the students at the local school who felt their home resembled Thomas Moore’s fictional land. In the woods across Beaver Dam Creek was the site of Utopia School. Across from Hannah AME Church is Hannah School, a Rosenwald school from the 1930’s.

The Genealogy Trails website has several references to teachers and principals for Utopia School gleaned from items in the Newberry Observer dating from the late 1800s to early 1900s. Most of these graduated from Newberry County. The first African American students didn’t enter Newberry College until 1966, so it is highly unlikely that these were teachers and principals at an African American School. Listings from Chronicling America also support the the existence of two schools. There are multiple society listings for Utopia School in the Newberry papers, but only two for Hannah School. This would be typical for the times, where attention is given to the white school, but little is paid to the black school. One of those listings for Hannah is an ad for teachers, similar to the Hartford School listing above. However, the school is clearly designated as a “colored” school. 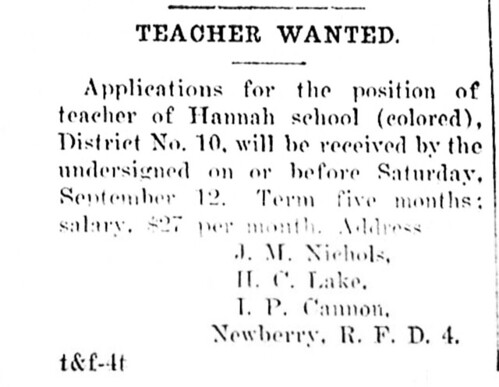 It’s interesting that even though this ad is a few years later than the Hartford ad, the pay is substantially less. The term is also less – Hannah students attended five months, while Hartford students attend nine months of the year. Those discrepancies seem so stark and startling to our modern sensibilities.

I had other POIs in my GPS, and the day was early. It was time to move on from Hannah. We zig-zagged through country roads looking for my next target, which was another school, Stoney Hill.

We found Stoney [sic] Hill School about four miles from Hannah and the Deadfall Community. The school was sitting next to a playground, and it looked like the building might be in use as a community center. I only took one photo of the school. Even though it looked like it was a community center, there was a house right next to it with activity, and I wasn’t sure about trespassing. 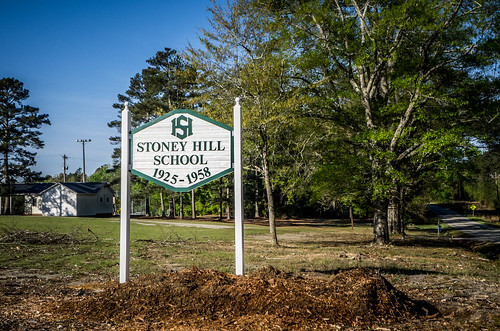 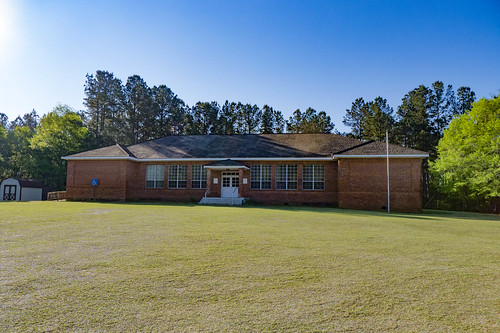 Architecturally, the school looks like one of the larger Rosenwald Nashville designs, with its two flanking wings. However, I find no record of Stoney Hill in the Fisk data. They may have used a Nashville design, but they probably didn’t receive Rosenwald funds.

According to the Genealogy Trails website (and many thanks to fellow explorer Mark Elbrecht for pointing me in this direction), Stoney Hill was established in 1924 as a high school consolidating Big Creek School and St. Luke’s School. In 1947 the high school students were sent to nearby O’Neal High School, with grades one through eight continuing at Stoney Creek. In 1958 the school was closed, and sold to an individual who used it for equipment storage. In 1971 it became a community center with a park. The Genealogy Trails website has many more details about daily life at the school, and is well worth a look.

Just up the road from Stoney Hill School we found St. Luke Lutheran Church. St. Luke School, mentioned in the Genealogy Trails information, was located next to the school at one time, but is now long gone. The church itself was established in 1828. The current buidling was constructed in 1955. Again, Genealogy Trails has a huge amount of information about the site. 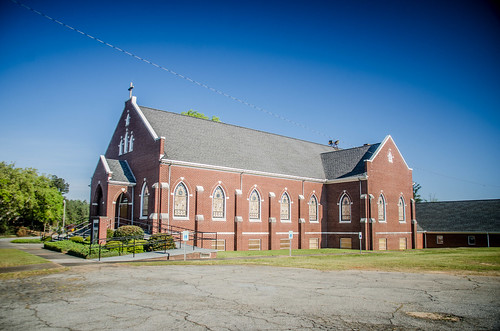 There was a large cemetery across from the church, but, quite frankly, it was too new to be of interest to us. We were about to continue on our way when we spotted a much older cemetery to the side of the church. I didn’t spot any signature stones, but there were some very old headstones dating to the founding of the church. There were also many surnames I recognized as old Prosperity names, such as Bedenbaugh and Dominick. 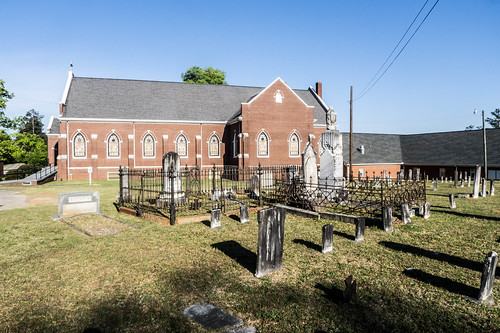 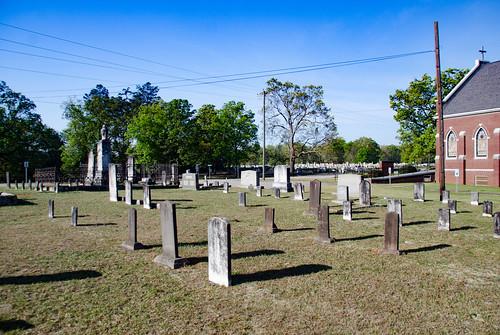 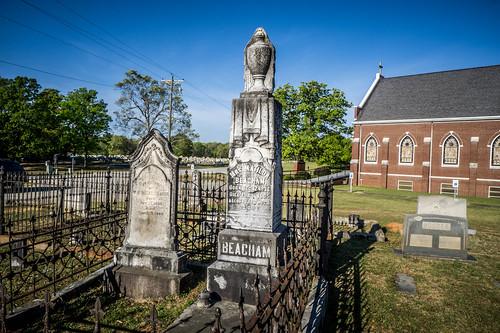 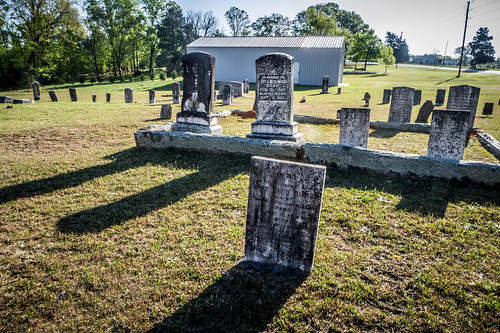 One odd thing I noticed was that even though the graves were aligned east-west, as is traditional, the information on the older headstones was on the west side of the stone.

Just past St. Luke’s Church was an old country store. We couldn’t tell if it was still in operation or not, but it didn’t really look like it. 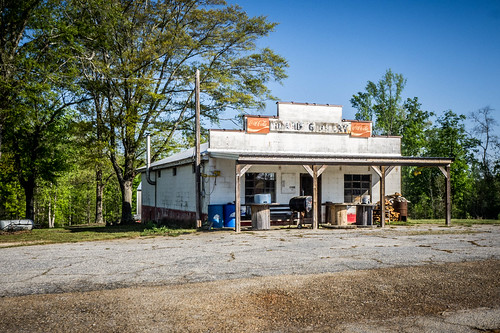 According to the Genealogy Trails site, this was once a very active community.

Stoney Hill was growing and thriving. There were sawmills, a cotton gin, a pea threshing outfit, a syrup mill, a blacksmith shop, country stores, and countless family farms which were really the backbone of the community.

The Carolana website indicates that there was a post office here known as “St. Luke” in the late 1800s.

So far our day was off to a good start. We had seen three historic schools and one historic church and cemetery. It was still early, though, and there was much more to see. That will be in the next part of this narrative. 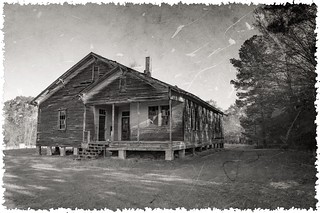 9 thoughts on “Newberry Schools and Churches Ramble – Part One”