We made it back to Washington after the holidays and I dived right into the music scene. The Sunday after we returned there was a Scottish music session at Littlefield Celtic Center, followed by a practice session Monday afternoon. Since other musicians had been encouraging me to attend one of the practice sessions (and I’m still not sure how to take that) I decided to go to Monday’s session as well.

For the Sunday session I felt like I was well-prepared. I had my guitar, a new music stand, and a printout of the music from the Tartan Top Twenty. I found my spot and got set up as the small pipes were tuning and also getting ready.

Seventeen musicians made it to this session. There were some regulars I recognized – the cittern player whose name I can’t remember, Barry the autoharp player, and I recognized at least three of the small pipe players from the last Scottish session. Seven small pipe players made it to this session. There were also several fiddlers and even a harpist. Later during the session a piano player showed up. It was a large group.

Sitting next to me and also playing guitar was Richard Riddell from Anacortes. Turns out that we had quite a bit in common. We both studied vocal music and had taught middle school chorus. Richard sang one solo song during the course of the afternoon. 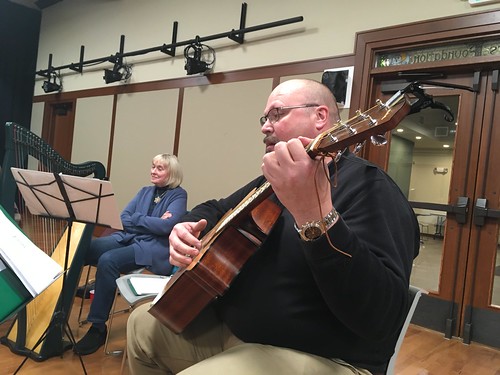 Not only did we have a large group of musicians, but we had a huge audience as well. The group had to scrounge around for more chairs just to accommodate everyone. There were at least thirty non-musicians there, which was great.

Skye Richendrfer, one of the pipers, called the group to order and got things underway. Skye is the executive director of the Littlefield Center, and served as master of ceremonies. He occasionally paused to tell the audience about the music and the instruments as we went along. The atmosphere was very relaxed, but it took on the feel of more of a performance than other sessions I’d attended.

Having the music in front of me was a GREAT help. I could actually keep up and felt like I was doing a decent job of playing along. The tunes were lots of fun, and I even tried picking the melody occasionally.

Here are some samples from the session. The first is a collection of several tunes. I don’t remember names right off hand.

Here are two slower waltzes. The first is Inisheer and the second is the Maggie West Waltz.

Also present were two singers from Silverdale on the Kitsap Peninsula. The mother-daugher team of Stacey and Amanda Giermann sang several beautiful pieces for us. 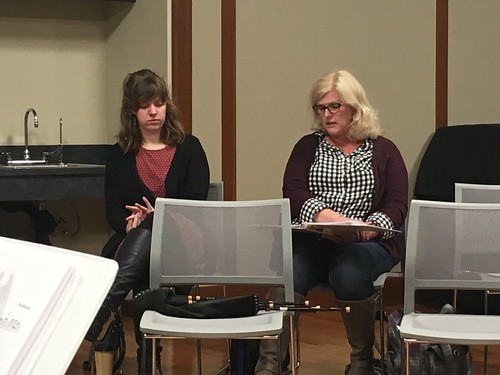 Here’s a short video clip of one of the fiddlers and small pipes players playing a set.

Sunday’s session was a blast and the appreciation of the audience just made it that much better. So, I didn’t feel to anxious about Monday’s practice session. It was pretty much a repeat of Sunday, but with a different (smaller) set of musicians and no audience.

Since this was a practice session I decided to bring something other than my guitar. I also brought along my melodica and two of my tin whistles. I had thought about bringing the banjo, but decided against it. I’m still not sure how my instruments fit into the various genres. I know that the banjo makes an occasional appearance in Irish music, but I wasn’t sure about Scottish music. I also wasn’t sure about the direction of this session. Would it be Scottish? Irish? A combination? I figured I was safe with the melodica because it’s a complete outlier to both genres.

Once again, Skye led the group. It was decidedly Scottish, once again relying on the Tartan Top Twenty. I played guitar about half the time and melodica the other part of the time. The melodica actually fit in quite well. I liked it because I could actually play the tunes rather than just strum and accompaniment. With music in front of me I was able to keep up with no problem at all. The melodica was a novelty to some in attendance, but they like its sound. Sadly, that sound was largely masked by the pipers. Maybe that’s why they liked it. They couldn’t hear it!

I made some recordings, but just didn’t feel like uploading any. I also didn’t take any photos during the Monday session. I did have a great time and will be back for another Monday session.

As far as upcoming sessions, we have another Slug Jam in Bellingham this Thursday and I plan to attend. I think I might add the banjo to my arsenal for this one. We also have the upcoming Bellingham Folk Festival in about a week, and I’m looking forward to participating in that one.

One final note – I’m trying to learn the tunes, but it’s a challenge. The Irish sessions both at Littlefield and Honey Moon Meadery don’t allow sheet music. Neither does the Bellingham Ceili Club sessions, which I have yet to attend. I wish they did allow music, or at least cheat sheets. Maybe I can sneak in an iPad for a bit of help.