Ken Cothran was very indulgent. He waited patiently as I tried out all of the gear in the Moog showroom. After our Moog Adventure we were having a discussion on Facebook, and he confessed that most of what he had heard sounded like noise, and he wasn’t sure how such an instrument would be used in composition. Ken wasn’t criticizing the instrument, but just didn’t have the background with it.

I explained that for the most part at the Moog Store they were just putting the instrument through its paces, demonstrating the the types of sounds it could create. This would be similar to running a few scales on a chosen instrument. The Moogs are monophonic, and are meant to be part of a toolbox of instruments, which would include multi-track recorders and sequencers.

As I was trying to come up with a good example of how these instruments could be used (Monophonic Moogs specifically, as opposed to modern polyphonic digital keyboards), the first thing that came to mind was the classic – Switched on Bach, by Wendy Carlos. 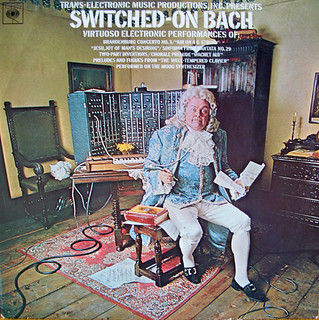 Wendy Carlos recorded Switched on Bach in 1968 on Moog Modular synthesizers. It was a breakthrough recording, demonstrating what the new synthesis technology was capable of doing. Carlos followed up with Switched on Bach II and the Well Tempered Synthesizer. All of this was recorded on very early Moogs, even before the Moog Mini made its appearance. In fact, Carlos derided the Moog Mini as an inferior instrument. 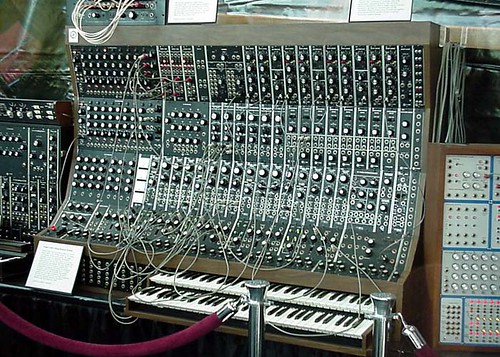 While I was looking for samples, I discovered was that Switched on Bach is now quite rare. I first looked for samples on YouTube, but the only things I could find were remakes – people recreating Carlos’ work on modern synthesizers. Even more disturbing, there don’t seem to be any recordings available for purchase. I checked Amazon, and the only CDs were starting at $60. I finally found a copy of “Switched on Bach 2000”, a re-release, on eBay, and managed to place a winning bid for it. (Should be here Friday.) Of course, after I placed the bid Laura informed me she had vinyl LP.

I was able to find a couple of short samples of Carlos’ work and uploaded them to my AudioBoo account. These are just 30 second segments, so they fall under Fair Use. The first is the opening measures of Bach’s Fugue in E Minor.

This sounds very simplistic to our ears today. It’s hard to understand what an amazing technological breakthrough this album represents. We can now replicate Carlos’ work quite easily with basic gear. Heck, I could even do it on my iPhone. That might be one reason the CD is so rare nowadays. It could also be the reclusive nature of Wendy Carlos, and her desire to tightly control her work.

Carlos also composed the soundtrack to A Clockwork Orange. I had a cassette of that soundtrack that I used to listen to endlessly. Here’s a sample of the opening of the Scherzo from Beethoven’s 9th Symphony, as played by Carlos:

Even with the many imitators, there has been one recording of classical music given the synthesizer treatment that I enjoy. Jazz keyboardist Bob James (best known for his theme from the TV show “Taxi”) did a recording of works by Jean Phillipe Rameau, largely in the same spirit as Wendy Carlos’ work. I found these delightful. Unfortunately, this recording is now out of print and is about as rare as Switched on Bach.

But, back to the Moogs…

One Moogist that isn’t a rarity is Rick Wakeman. Wakeman didn’t use Moogs exclusively, but did extensive solo work on a MiniMoog as part of a multi-keyboard setup, as shown in this 2012 shot: 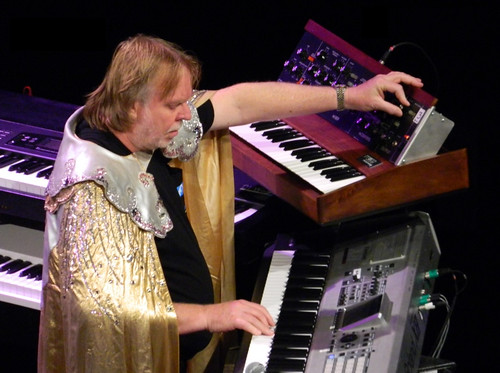 Wakeman was part of the 1970’s Prog Rock movement, and really highlights all of the excesses of that genre. He treated his racks of keyboards as a sacred space, and would only approach the keys clad in his signature cape.

Even so, Wakeman did some amazing keyboard work. Here is a short section from the “Anne Boleyn” section of his Six Wives of Henry the VIII, recorded in 1973:

Wakeman was also known for over-the-top live performances, often in collaboration with the London Symphony Orchestra. These included “Journey to the Center of the Earth” in 1974 and “The Myths and Legends of King Arthur” in 1975. The latter is the style of Progressive Rock parodied by films such as “This is Spinal Tap.” Here’s a view playlist of the pieces from the album. These videos use clips of live performances interspersed with clips from the movie Excalibur, which famously used Carl Orff’s “Carmina Burana” for its soundtrack. I dare you to watch the whole thing: