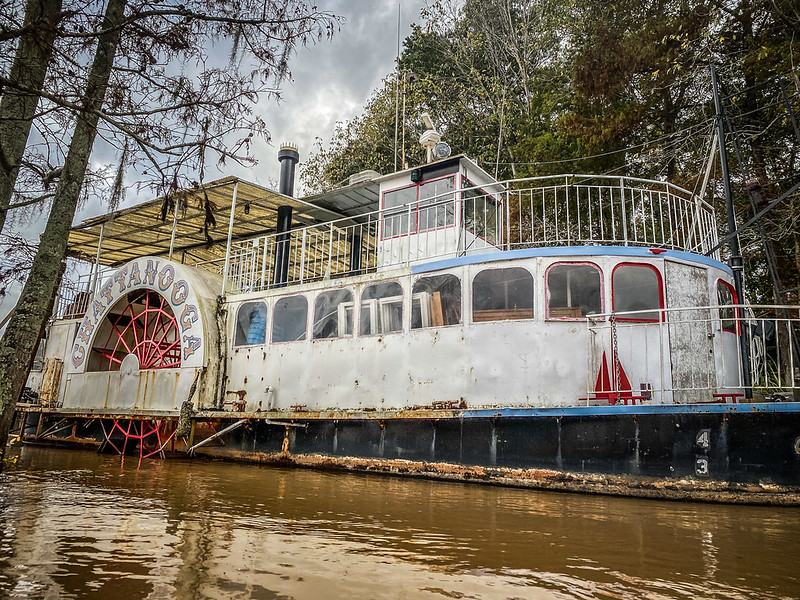 It had been over a year since I’d been to Low Falls, and longer than that since I’d done any serious paddling there. The last time I was at this spot was with a TV production company who was filming me for a proposed new series. That’s all I can say about it because of non-disclosure forms I had to sign. So far nothing has come of it and I doubt anything will, but it was still an interesting experience.

For this trip there would be no TV cameras, just the armory that we normally carry with us. This would be a small group. Only Alan and Matt joined me for our trek.

The landing was hopping with boats coming and going. This always seems to be a popular place to launch. In between boat launches we managed to get our kayaks on the water.

I had gone through Google Earth and marked as many floating cabins as I could find we set off trying to find these, heading north first. Some of these were quite easy to spot.

We circled the cove north of Low Falls until we reached the long railroad trestle across the lake. Along the way we checked out a couple more ruins of cabins.

I absolutely love kayaking through cypress swamps. In spring and summer it’s like paddling through a cathedral. In fall and winter they take one a haunted quality. Both are intriguing. The late fall colors lingered a bit, casting everything in shades of green and brown, alternating with blue and gray, depending on how the clouds rolled by.

We checked out one more cabin on the other side of the trestle then continued north, deeper into the cove on the west side of the Santee River channel.

We passed a stand of cattails that seemed to be alive with movement. Hundreds of red-winged blackbirds were flitting about, rustling the grasses. The sound was amazing.

As we paddled deeper into the cove cover vegetation such as lily pads got thicker and harder to navigate. Eventually we reached a point where it was just too much of a hassle to proceed.

We headed back toward the trestle, this time following the east bank of the cove closest to the Santee. There were several deep pathways indicated on Google Earth and we wondered if any of these might actually connect to the river. (They don’t.)

We also had another cabin to locate. This was just before the trestle in a deep cove. We paddled to the area and could just see the roof through the dense vegetation. Alan tried to bushwhack his way back to the cabin. Matt and I looked for an alternate route. None of us reached the cabin and Alan got stuck in the thick cattails for quite awhile.

Normally I have a machete with me on these trips but for some reason I’d left it back at the car. We just had to wait for him to fight his way through.

When we regrouped we were tired and hungry. We paddled back to the east end of the trestle and found a spot to pull up for lunch.

After lunch we paddled under the trestle and began exploring the cypress forest to its south and bordering the Santee. There were lots more cabin ruins in this area. We stuck to the tree line rather than head out to the more heavily trafficked open water near the landing.

Given Giuliani’s gaff at the Four Season’s Total Landscaping we wondered if we had found the next location for a press conference.

Before long we could see that large boat I had marked on my GPS. It was a side-wheel paddle boat called the Chattanooga Star, and it was massive for this lake. We wondered what in the world it was doing here. It also looked like it had seen better days. The lettering was faded and other parts of the boat looked like they needed repair.

The boat was docked at a lake house. Two dogs came bounding out barking at us, with their owner close behind trying to pull them back. I asked about the boat and found that I was talking to Captain Mike Hosemann.

Brothers Pete and Mike Hosemann had built the Chattanooga Star with their father in 1982 in its namesake city, Chattanooga, TN. The Star is diesel-powered, rather than steam. For many years Captains Pete and Mike traveled the rivers of the midwest, mainly taking students on tours and teaching them about riverboat life.

Tourism fell off, and for one reason or another Captain Mike decided to move his riverboat to Lake Marion. Mike said that he was in the process of refitting the Star as a private houseboat.

We paddled around the riverboat taking a few more photos, then made our way back to the landing.

Our trip was about 8 miles. Of course, I took a time-lapse of the trip with the GoPro.

Since we were so close, we ended the day at Lone Star BBQ down in Santee. It was a most excellent trip.

One thought on “Low Falls and the Chattanooga Star”