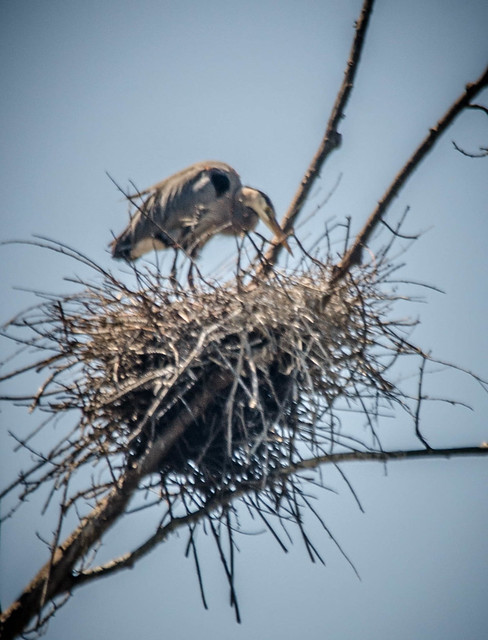 This past weekend had already been incredibly busy. There was the Morten Lauridsen event, SC Comicon, and I was barely getting started. Seems like everyone had an event planned for this first weekend in April, and I was going to hit as many of them as I could.

Saturday was the date for the Foothills Equestrian Nature Center (FENCE) Kite Festival, near Tryon. This was actually a postponed date from an earlier one that got rained out. The festival would start at 1:00 pm and take place up on Hawk’s Ridge in the park.

I left SC Comicon and drove straight on up to FENCE, armed with multiple kites. There were quite a few people gathering, and I could see kites attempting to fly up on the ridge. 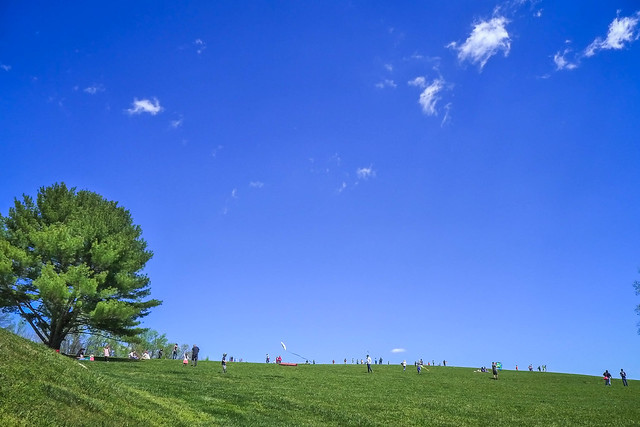 Mostly, these were kids, as it should be. FENCE had given inexpensive kites to the participants, and most of the kids had these. There were a few other more exotic kites that others had brought. 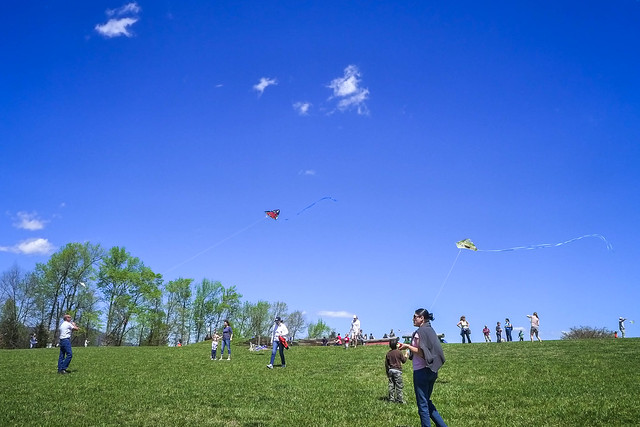 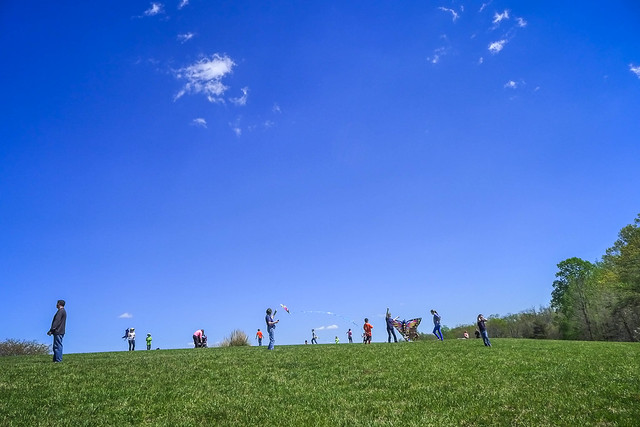 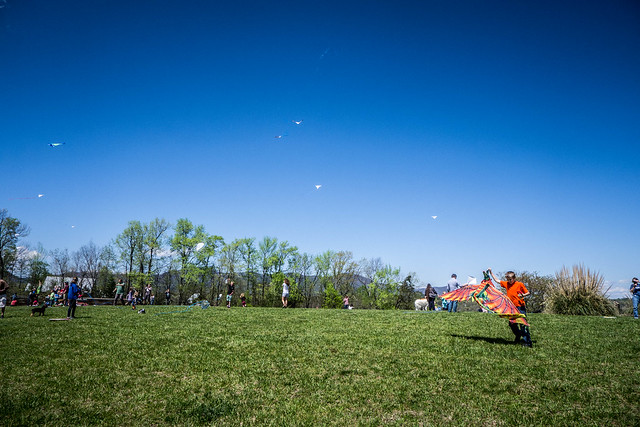 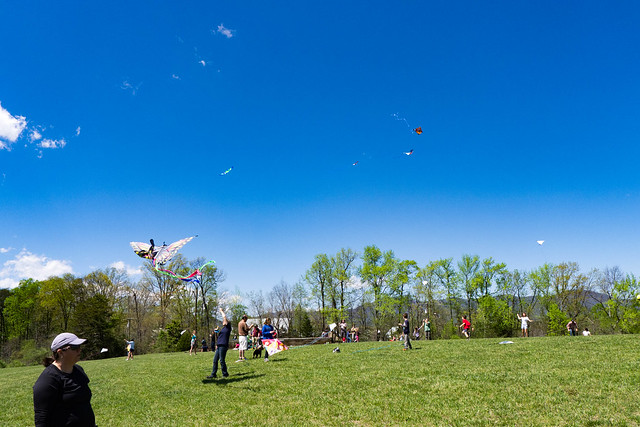 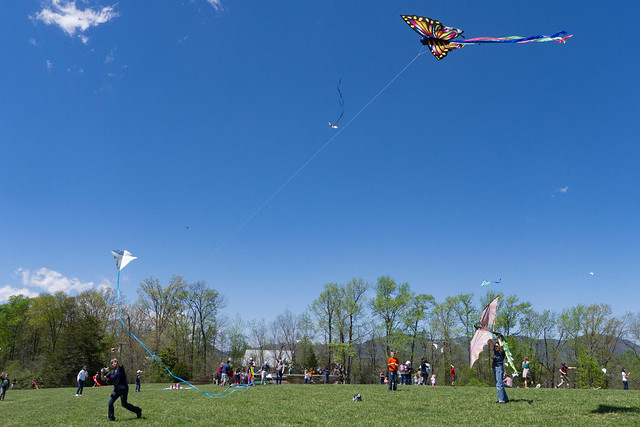 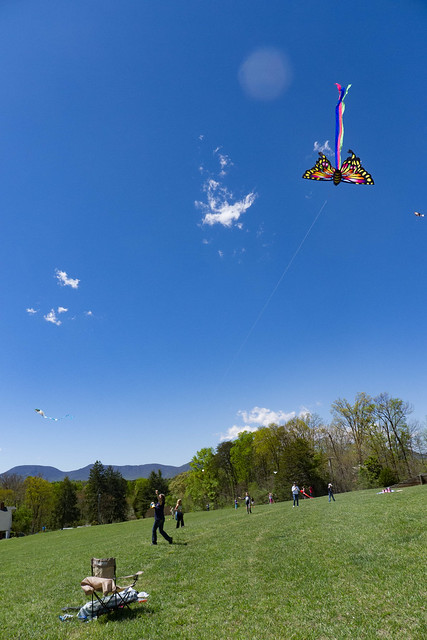 The winds were light and variable, not ideal for flying. The kites would go up with a series of gusts, then come crashing back down. I started with a simple single-line delta kite, but it didn’t want to fly. I pulled out the stunt parafoil, and managed to launch it for a bit, but even that didn’t work.

I was a bit frustrated and disappointed, but I’ve learned that’s the nature of this hobby, particularly in this area. Sadly, some of the participants didn’t have that understanding about kite flying. Worse yet, these were adults, and not children.

Most of the kids and parents were great, and were having fun, but there were one or two near me that just about spoiled things. One mother was trying to force her three year old to fly a kite, when the child clearly didn’t want to. She was resorting to shaming the child for not trying, which galled me. Then there was a father that was more interested in flying a kite than his two boys. The boys were making their own mischief, and the father was constantly screaming at them. I think they forgot that this is supposed to be fun. Even in the absolutely beautiful setting we were in, they found a way to spoil things. Fortunately, there were just one or two.

I called Laura before I left, and she said they had great winds back down in Greenville. When I got home, she said we should take the kites out to Legacy Park. She hopped in the car, and we headed in that direction.

Here’s where different parts of my personality warred with each other. I love taking photos and documenting events. However, I also love participating in events. Some of these, like kite flying, are mutually exclusive. Unless I’ve rigged something special, I can’t fly kites and take photos at the same time. This proved to be a problem on this outing.

The winds were much, much better down here than up at FENCE. I launched the parafoil with no problem, and attracted a bit of attention with the stunts. I was having a blast.

Then I was upstaged. A guy brought out a HUGE parafoil used for kite surfing. It even had a harness. Once he got it launched he could jump and get airborn with a good gust. It looked fun, and also quite dangerous. I’m not sure I’d want to try that in a crowded park. Together we marked up the sky with large kites. He folded up his first and came back to chat with me and Laura. I may not want as a large a sail as he had, but I think I would like to move up to a 5 square meter parafoil instead of the 2.5 I was using. His was a 9 square meter sail.

Sunday had just as many options, or more, than Saturday. I had already planned to attend the service at First Baptist, but the afternoon was open. I had a two-day pass to Comicon, and thought about heading back that way. It was also Sunrift Adventure’s Demo Day up at Paris Mountain State Park, and I had thought about trying out new kayaks. Ultimately, though, it was Laura’s suggestion that won out. We headed over to Lake Connestee Nature Park to see if the herons were nesting.

It was another spectacularly beautiful day, and there were lots of folks out enjoying the trails. 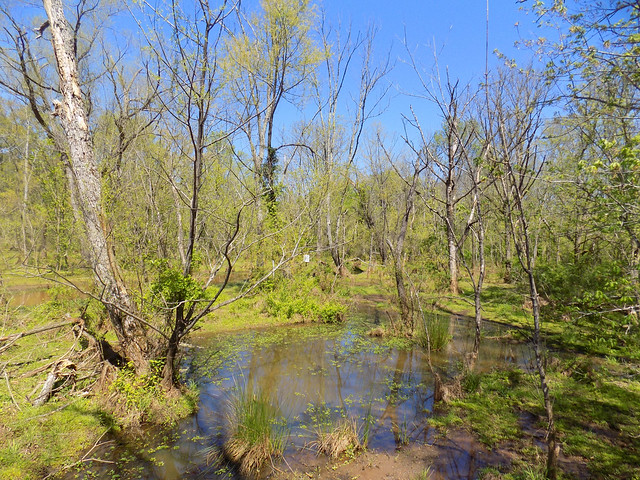 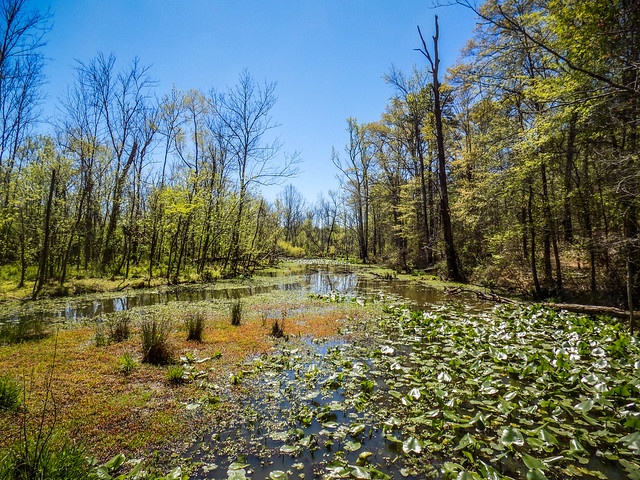 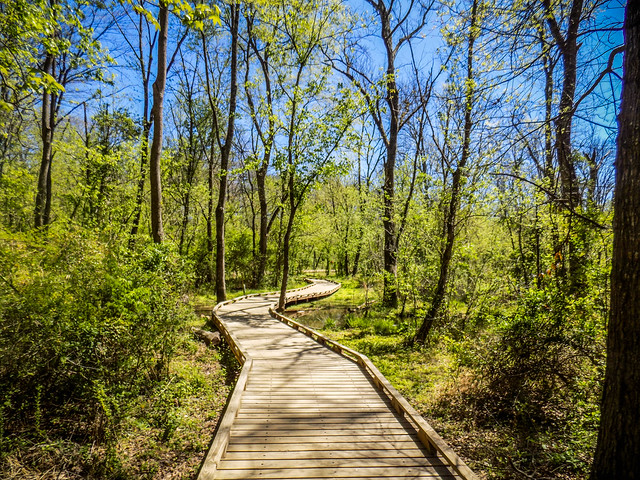 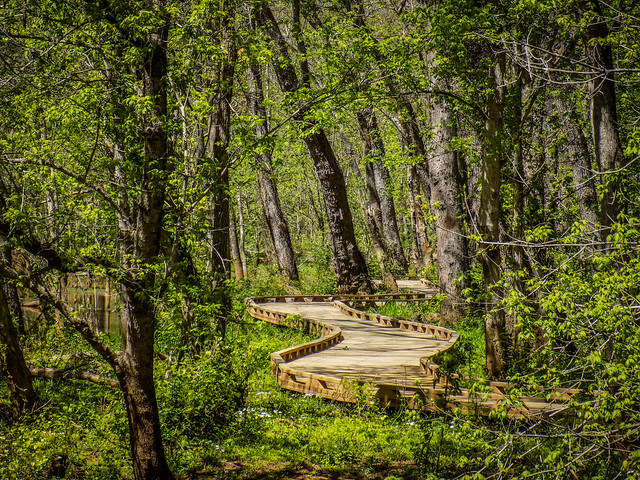 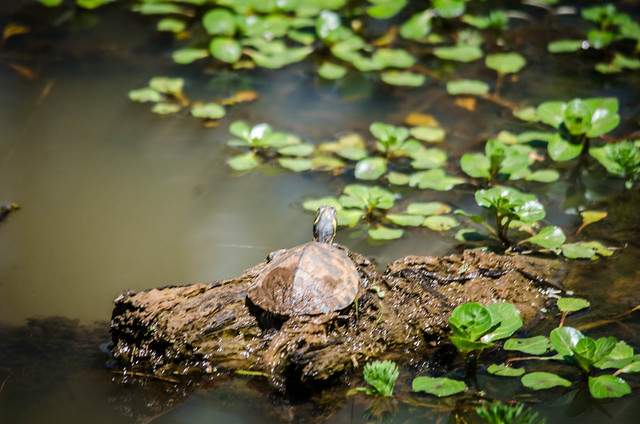 At first we set off in the wrong direction, but soon we found the observation platform with the best view out to the heron rookery. 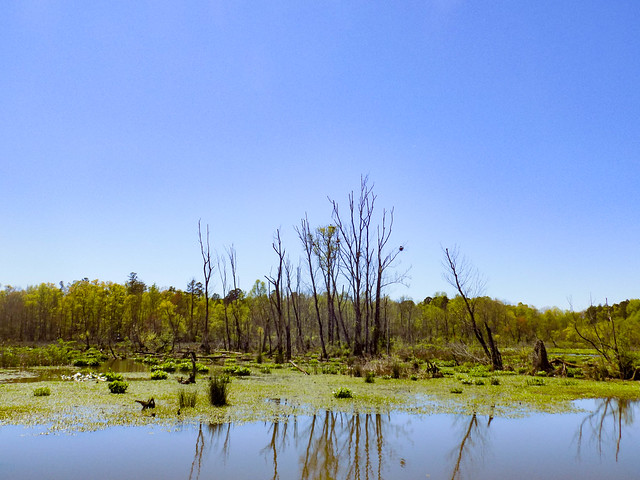 I’d brought my camera with the 500mm lens so I could get close shots. 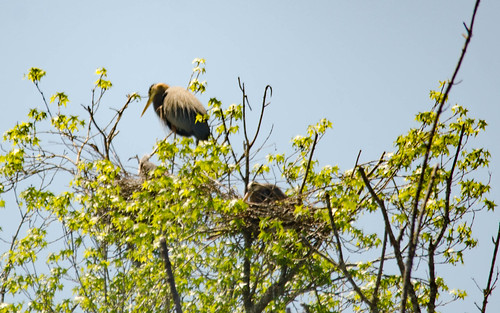 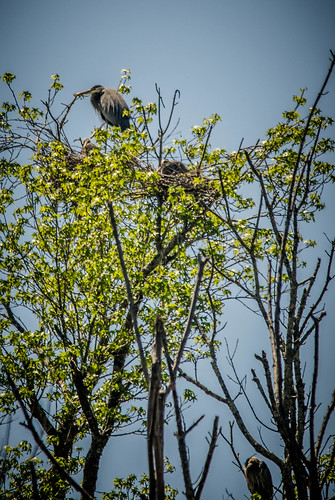 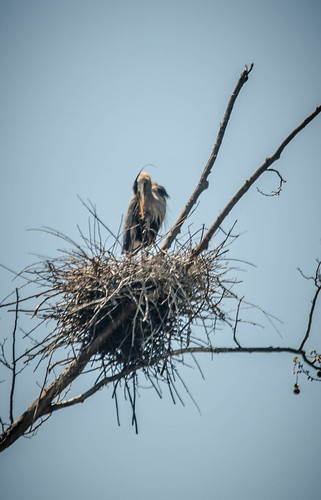 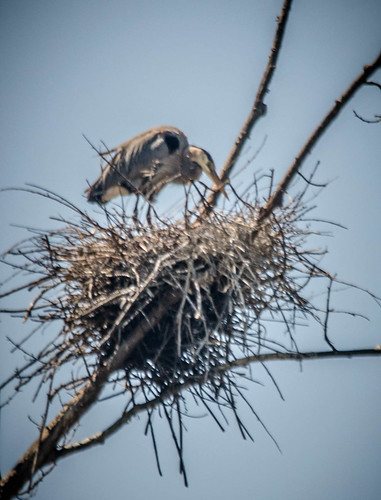 There was other wildlife in the area, too. Turtles were out, and fish (trout?) swam up to the platform. I was beginning to wonder if visitors had fed them. 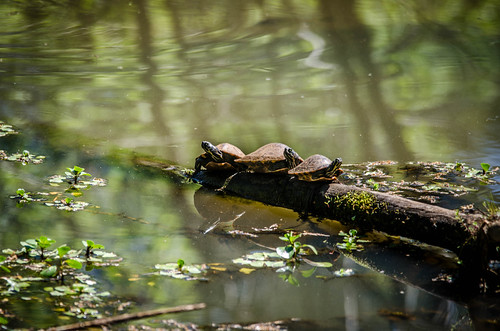 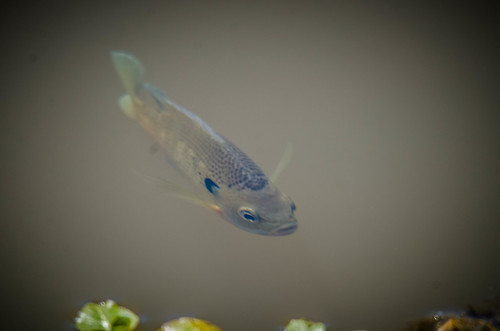 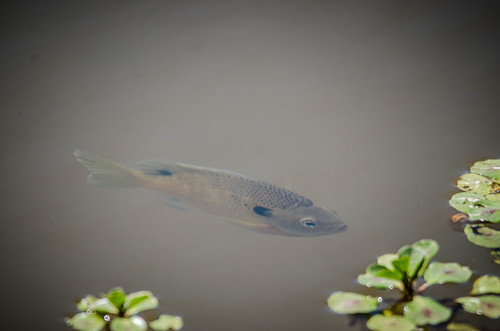 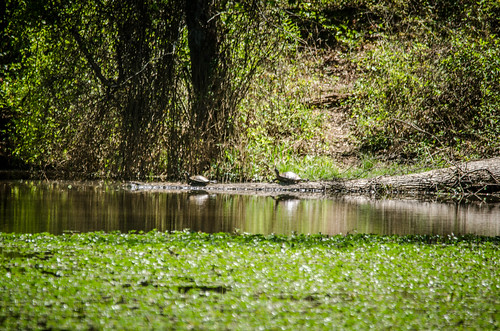 We continued on our way, passing a couple of feeding mallards. We walked around to the Swamp Rabbit Trail. This time of year there are even better views of the rookery. However, as the leaves set on the nests will be obscured. 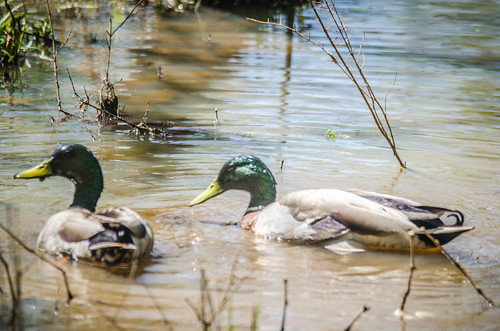 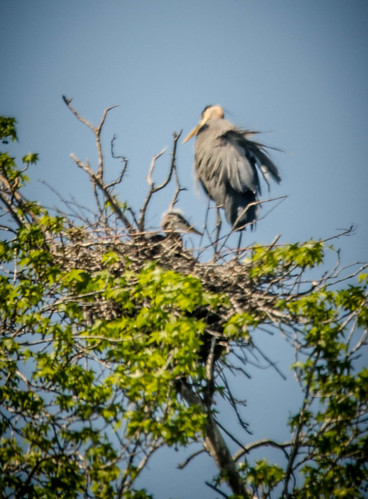 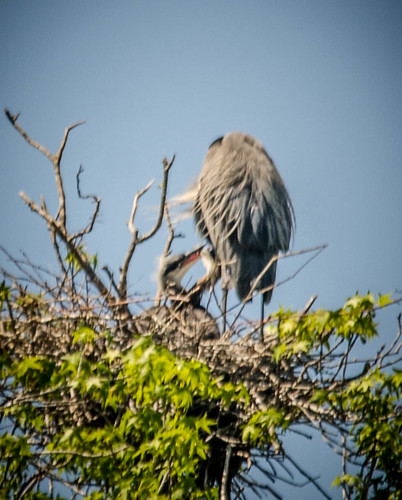 It had been a great day out, but, honestly, I’m getting old, and between kite flying, hiking, Comicon, and everything else, my feet were tired. Laura felt about the same way. Not a bad way to spend a beautiful spring weekend, though. 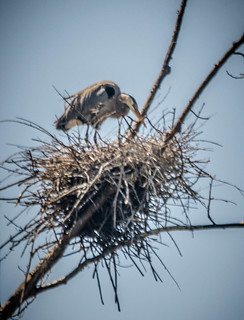