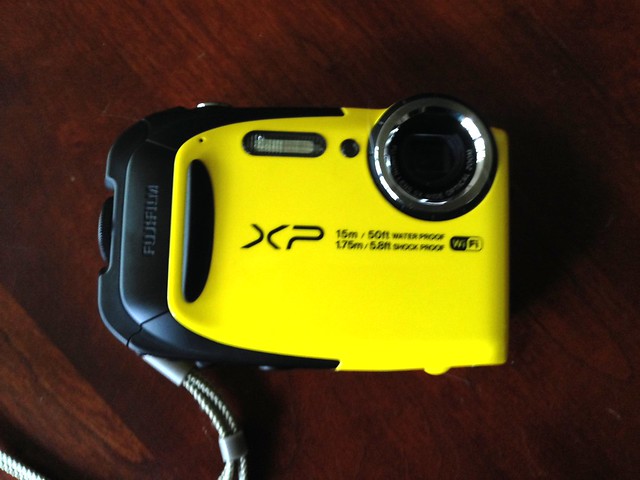 Looking back at my last post I realized I hadn’t included much information about the Fujifilm FinePix XP85 camera that I purchased recently. I’d made a few comments, but hadn’t really followed up with substantial information. With that in mind, here are a few more thoughts about the camera.

I’m here in Florida at the sister-in-law’s place, and I like heading out for an early morning paddle before the heat and storms set in. This seemed like the perfect time to put the XP85 through its paces. As I headed out the channel behind Amy’s house the winds started to pick up, and out in the main body of the Indian River it was a bit…bouncy. As it turns out, these conditions were perfect to prove a couple of points.

I had left the GoPro at home this time. When it’s bouncy and splashy I always get water droplets on the camera, so the images have lots of spots. I really only get a few minutes of useable imagery when I’m shooting video in rougher conditions. As it turns out, this was the case with the XP85 as well. On my old camera I had a little neoprene wrap that protected the camera from random splashes. It didn’t quite fit this camera, so I left it off. As it turns out, I need something like that. Many of my test images have little water spots, despite my best efforts to wipe the lens on my t-shirt. 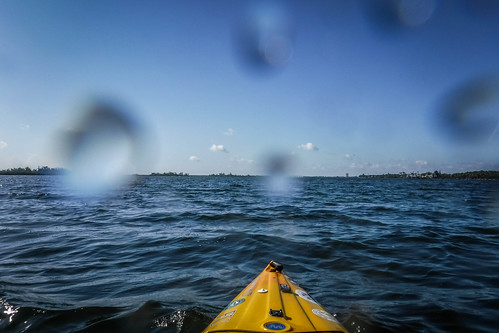 First I tried panorama mode, since I failed to post any test images on that previous post. I wanted to know how this compared with the panorama function on my iPhone. My first attempt returned an error message. Apparently I was scanning too fast. The camera provides a nice horizon line, but for my second attempt I must have deviated from that line. Unlike the iPhone, this camera doesn’t compensate. There are obvious glitches where the camera moved above or below the horizon line. It doesn’t have quite the computing power of the iPhone to render images.

I was curious about the various scene modes. In addition to Landscapes, Portrait, Party, Nighttime, etc., it has HDR and Action Cam Modes. I use HDR quite a bit in post processing, although I try not to use too much. I wondered how it would turn out in-camera. The Action Cam setting is supposed to mimic the wide angles of the GoPro.

As much as is possible on a kayak being blown by the wind, I tried several shots of the same scene using different scene settings. To be honest, I couldn’t tell much difference between the shots. Here’s the shot in Program mode, my usual default: 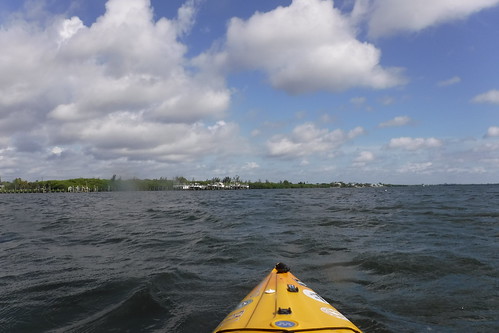 The water spot was present there, too. There was lots of spray. Here’s the same scene set to Landscape Scenery Mode: 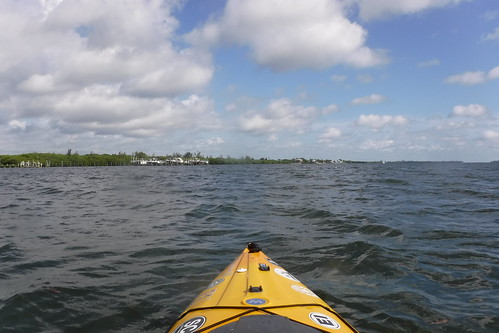 I really can’t tell a difference between that and Program Mode. The EXIF data even looks pretty much the same, which just a slight variance in exposure. 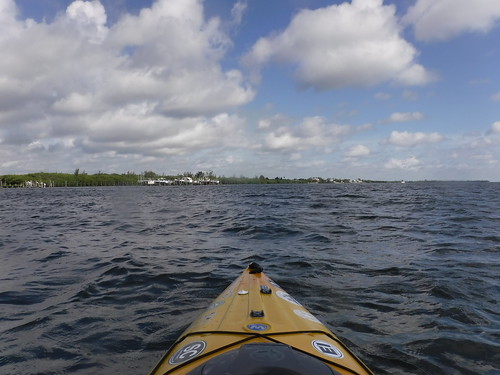 Again, the differences are so subtle as to be negligible. The clouds underneath are a bit darker, and the sky and kayak colors have been punched up a shade, but not much more than that. 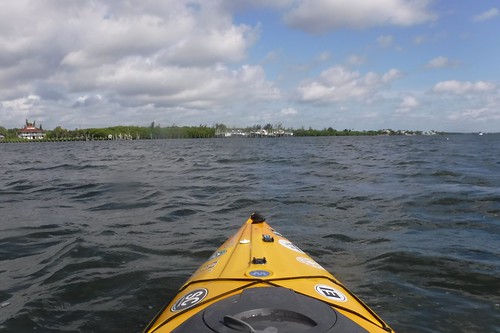 The angle is a bit wider, and there is a slight curvature to the horizon, but these come off more as defects than any benefit to the image. Then again, the defects imparted by Lomography cameras and their ilk have a certain appeal. Just look at the plethora of filters, etc., on Instagram. I don’t know if the effect would be more pronounced if I were doing video.

Back on shore I decided to give the WiFi capabilities another run. I didn’t have the app installed on my iPad, so this gave me a chance to read the reviews as I downloaded it. They were appalling. 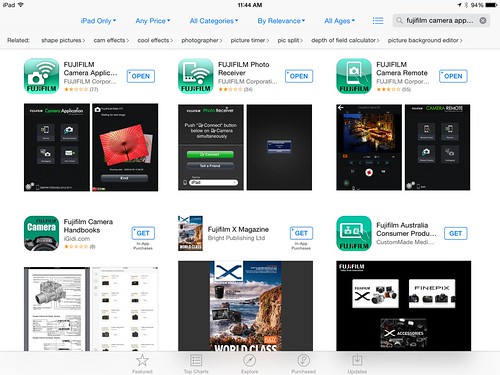 Fortunately, there were some recommended alternatives. I loaded all three options that had “Fujifilm” since they were free. There was the original Camera App that got such abyssal reviews, a Photo Receiver app, and a Cam Remote app. The Cam Remote was the one everyone suggested as an app that actually worked. 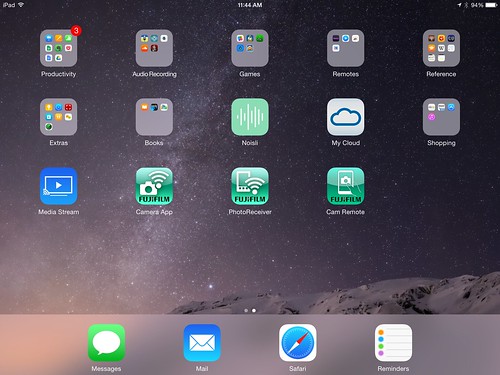 I tried the Camera App, and had the same result as I’d had with the iPhone. It would not connect to the camera for anything. I switched to the Cam Remote and had better luck.

In order to connect to WiFi you have to go into the cameras menu and select a connection option. This is so that WiFi isn’t constantly active and draining the battery (which drains quickly enough on its own.) This turns on a WiFi hotspot in the camera with its own SSID. You then have to go to the WiFi settings in your mobile device and connect to the SSID, THEN start the app, THEN accept the connection on the camera. It’s a pain. 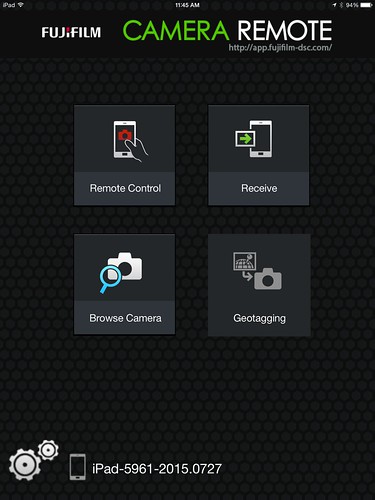 I started with the “Receive” function. This turned out to be VERY tedious. It transferred only one image at a time to the camera. I guess this lets you select only the ones you want to keep, then delete the rest. The “Browse Camera” function is much more useful, as it lets you select a batch for transfer. There are also limited sharing functions for Facebook and Twitter, but I didn’t try those. 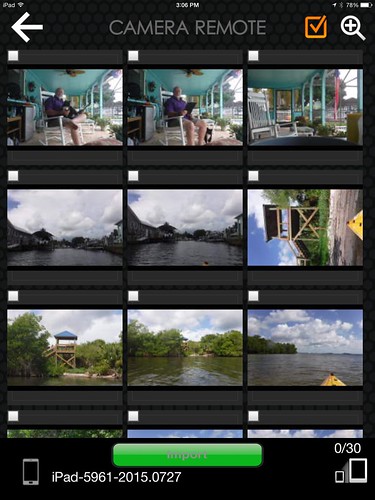 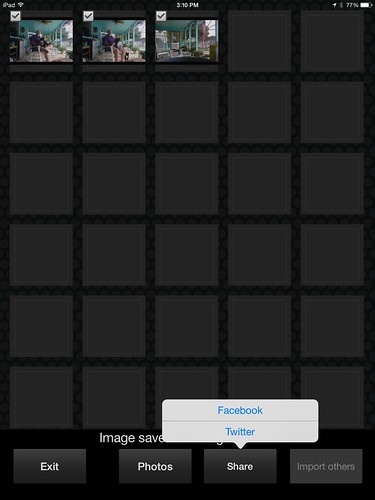 The Remote Control app worked better than I expected. It gives you functional control over zoom and shutter release, but as far as I could see doesn’t provide access to the menu options. I set the camera on a table and posted for a selfie with Amy’s cat. 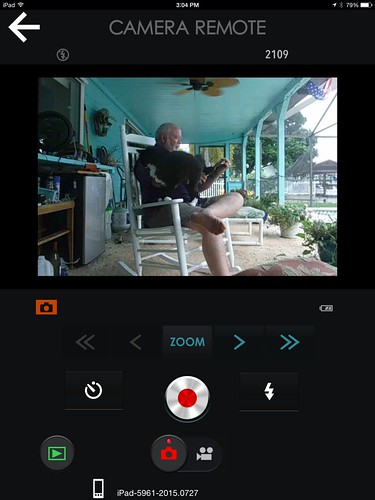 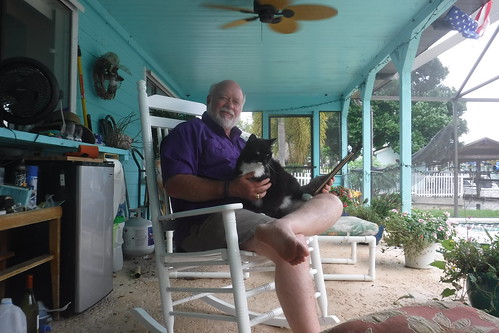 The Geotagging function was greyed out and not available. I don’t know if I have to be on my iPhone to make it work, but I’ll play around at some point.

The biggest problem with the Wifi functionality of the camera is that it’s too convoluted. Any time you exit from one of the app modules it disconnects from the camera. This also shuts down the camera’s SSID, so your mobile device goes back to its default connection. You have to start the connection process all over again – select WiFi start from the camera menu, change WiFi settings on your mobile device, start the app on the device, and OK the connection in the camera. I’m not sure it’s something I’ll use very often. For what it’s worth, all of the images above came straight from the camera and were uploaded from my iPad.

The Fujifilm Finepix XP85 takes good photos. Not great, but it does very well for the purpose for which it was purchased – as a quick camera while paddling. The other frills that may attract someone are really not worth it. The changes in image quality are so subtle that I can render them faster in post-processing if that’s the look I want. I’d rather shoot quickly without worrying about which mode the camera is in. As for panoramas, I’d rather take several shots and render in Lightroom or Photoshop, or pull out my iPhone.

As far as the app is concerned, it might be good for remote selfies and for transferring if all you have is a mobile device for upload, but it’s so tedious that just about ANY other method of accomplishing this task is better.

Even so, I still like the camera, and for the price point and the purposes for which I bought it, it’s fine.

On an unrelated note, I did have my little Nikon with the long zoom and my morning paddling trip, and was able to capture this heron: 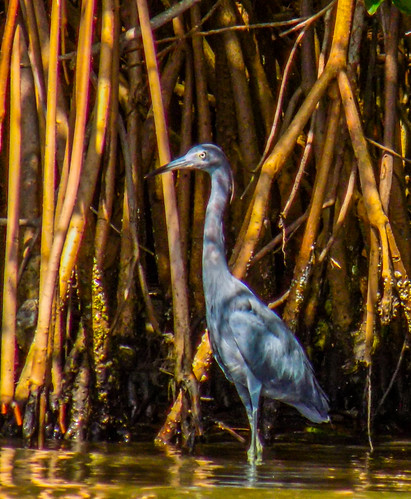