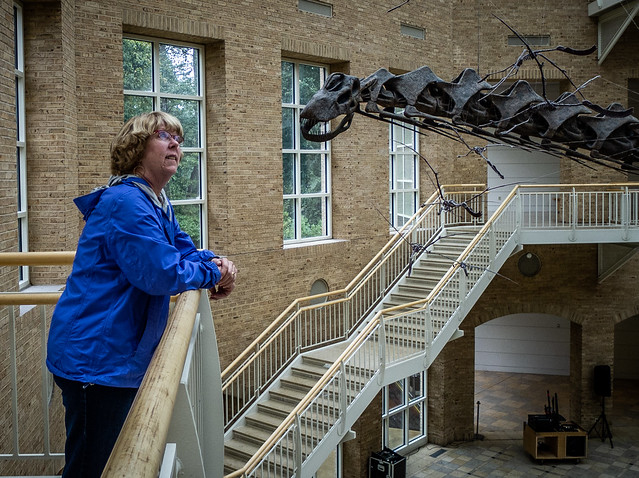 This year Laura’s birthday coincided with her Fall Break from Furman. Since I’m no longer tied up on Sundays and since she had a long weekend, we decided to do something completely different. Neither of us had been to Atlanta in a long, long time, so we decided to do a museum weekend with visits to the Fernbank Natural History Museum and the Georgia Aquarium.

We made the drive down Sunday morning for the overnight stay. Traffic wasn’t too bad, but I keep forgetting how far it really is to Atlanta. It seemed farther than I remembered. We drove straight over to the Fernbank, about the time it started to dump rain in Atlanta.

The International Symbol™ of natural history museums everywhere has to be a dinosaur fossil. Fernbank was no exception. There are statues of dinosaurs out front and tremendous bone casts in the large central area.

Flying dinosaurs such as pterodactyls hung from the ceiling.

Apparently I didn’t take any other photos in the museum, but there were some excellent exhibits. There was a traveling exhibit about the Silk Road that was superb. A permanent exhibit about the natural history of Georgia was done quite well, and there was another small exhibit about what constitutes race and culture. All of the displays seemed very well balanced and informative. There was a small interactive science section for kids.

The Fernbank Forest Walkway looked quite interesting, but we didn’t get a chance to explore it. The rain continued, so we only did the interior exhibits.

I think the last time I spent a night in Atlanta was for a tech conference in 2007. I was hobbled with gout and had a hard time getting around, so I don’t remember too much about that trip. As we drove from Fernbank to our hotel downtown I realized I didn’t remember much about Atlanta, period. So much has changed.

The sprawl didn’t really surprise me. That’s happening everywhere. A couple of things did catch my attention. First were the electric scooters. These were everywhere. Several companies have placed these as a ride sharing program for first/last mile of transportation where public transit is not available. It costs $1.00 to unlock the device with an app, then $0.15 per minute of use.

It seems like a good idea, but there are problems. There is the inherent danger of riding the scooters in traffic or on crowded sidewalks. The scooters are left just about anywhere and everywhere, and can be unsightly. I’ve also learned that the competition to collect the scooters for recharging has led to major conflict and is a story that sounds almost like a dystopian novel, with “juicers” competing for “bounties” on scooters.

The other thing we noticed was that many of the downtown streets were closed. As we approached, things opened up, and we saw the reason for the closures There was a huge Pride Day parade downtown. Folks with rainbow T-shirts and paraphernalia were walking back from the parade in the light rain.

When we reached our hotel there were problems. At first they said they didn’t have the king-sized room we had reserved, but only rooms with two full-sized beds. We called BS, pitched a fit, and were given a very nice room with a king-sized bed. We went down to their “bar” for drinks.

The bar was just an extension of the check-in counter, and the check-in clerks doubled as bartenders. They had cheat cards to make the few cocktails offered on their menu. I knew we should have just ordered a glass of wine, but I went for my usual martini. They couldn’t find olives, so we said just to make it a gin and tonic. What we got instead was gin and soda water.

Fortunately, the restaurant next door was excellent. We got great steaks at Max Lager’s, as well as decent martinis. Several groups arrive as we were dining, and Laura tagged them as chemists at a conference. They had name badges of some type, but more importantly they the demographics of a graduate research group. As one passed closer I could read a logo and the badge, and we saw that it was for a conference of electro-chemists (the chemistry of batteries, etc) that was going on in the Marriott nearby. Laura was absolutely right.

We walked back through more rain and turned in early.

After checking out of the hotel we drove the couple of blocks over to the Georgia Aquarium. There was already a line for the 10:00 am opening, but it didn’t seem too bad.

We started with the Rivers exhibit, which I liked. We got to see a river otter being fed, as well as marveling at the variety of fish.

There were exhibits for just about every type of habitat, from cold water to river to ocean.

One of the most impressive displays was the ocean aquarium. You enter through a moving walkway with a tunnel below the water. You look up at rays, fish, and even a couple of whale sharks.

The walkway takes you to a larger viewing area for the ocean habitat.

The displays were impressive, but Laura and I agreed that there seemed to be something a bit…off. The Georgia Aquarium is more tourist attraction than museum. Everything is flashy, and the emphasis is on spectacle rather than learning.

There is a constant John Williams-esque soundtrack everywhere you go. There was no place to just sit and quietly contemplate the beauty of aquatic life.

We went to a dolphin show and it was pure spectacle, with bright flashing lights, a loud soundtrack, video, and Broadway production values. Sea World wasn’t even this bad.

I can’t imagine how miserable this place would be on a crowded day. We both prefer the Monterrey Bay Aquarium or even the aquarium in Charleston to this. Oh well, we’ve done it once.

So, for our weekend getaway we had some ups and downs. Fernbank? Great. The hotel? So-so. The restaurant? Excellent. Georgia Aquarium? Too much hype. I guess that’s par for the course for any trip. Overall, it was still a great weekend and I’m glad we were able to get away and do something different.