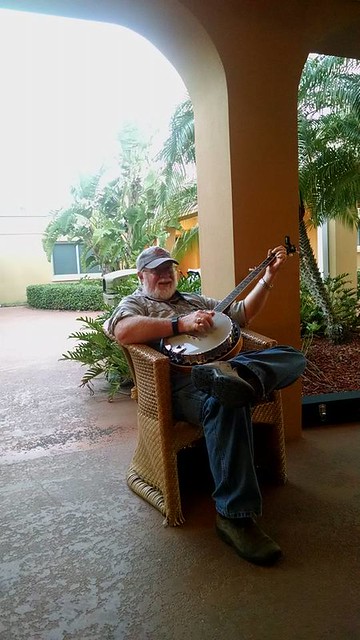 I’ve been trying to increase my repertoire. Mrs. Wright has her favorites, though. I have to play “Oh, Susannah” several times. She also likes just about anything that has a quick tempo so that she can clap along. Since it’s Thanksgiving weekend I also added “Simple Gifts,” “Joyful, Joyful, We Adore Thee,” and “We Gather Together.”

Wednesday and Thursday I sat with Mrs. Wright, Amy, and Laura in the courtyard of Atlantic Healthcare playing through my repertoire for about an hour each day. While there I got the reputation as “The Banjo Guy” from the staff and passing visitors. Everyone that walked by smiled. It was a good feeling.

On Saturday I added Christmas carols. Others in the courtyard joined in clapping and singing, and some gathered around. One woman pulled up close in a motorized wheelchair and asked if she could listen to the music. Turns out she was a former music teacher, so we had lots to talk about. Amy reported that this same woman had been screaming in the halls earlier in the week, yet we were carrying on a lucid conversation. Another woman sat with us. Mrs. Wright even enjoyed interacting with these others, though the activities tired her out a bit.

I’m not a great banjo player by any stretch of the imagination. I’ve developed my own weird style that’s probably completely wrong, but I can bang out a recognizable tune. Yet, the other patients at Atlantic seemed to appreciate it. Amy pointed out that I could provide a service. I might consider it. I’d want to build up more repertoire, and I think I’d prefer an informal setting of just playing in a courtyard, rather than as some organized activity set on some nursing home’s calendar. Too much pressure.

Still, it’s not bad for only playing for a year. By this time next year we’ll have to see if I can actually learn how to play it properly. 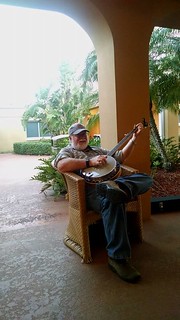