If you’re like me you learned the following about volcanic activity, probably in grade school:

It’s a nice, simplistic system, and like most simple answers it completely misses the mark. If I’d given half a moment’s thought I would have realized how simplistic these definitions are. Tommy sent me a link to an Oregon State definition that more closely matches what Tyson was saying.

Those definitions are not set in stone, and they mean different things to different people and to different volcanoes. One of the simpler ways to answer is that an active volcano is one that has erupted since the last ice age (i.e., in the past ~10,000 years). That is the definition of active used by the Global Volcanism Program in their catalogs. A dormant volcano would then be one that hasn’t erupted in the past 10,000 years, but which is expected to erupt again. An extinct volcano would be one that nobody expects to ever erupt again. These are human definitions of natural things – there have been a number of eruptions from “extinct” volcanoes!

Erik Klemettierik wrote an article on WIRED that expands upon this definition even more thoroughly. He starts off with definitions closely aligned with the Oregon State understanding. However, his summary paragraph is closer to the definitions that I learned in grade school.

Klemettierik makes some good points and the article taken in its entirety argues for a more fluid definition. Activity can be detected, such as the occasional steam plumes from Baker or the more overt activity in Yellowstone, yet these volcanoes aren’t erupting.

I tried to find something on the US Geological Survey website. It would seem that they have abandoned the terms “active”, “dormant” and “extinct” completely. The new terms are expressed as hazard or threat levels.

There is also an associated color code for aviation hazards. 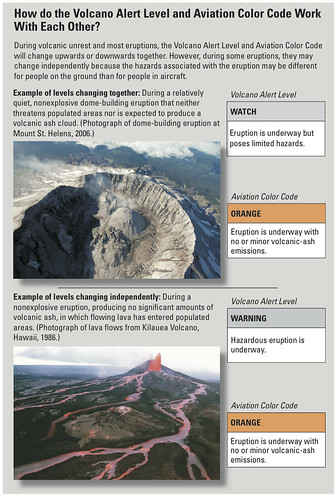 So, I was wrong to question Tyson Reed’s comments about Mount Baker while on our whale tour. According to new understanding, he was correct. However, I still won’t forgive him for pronouncing gneiss with a long “ee” sound. 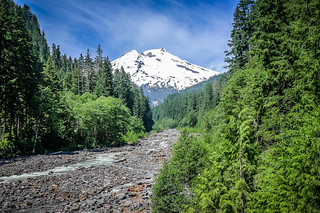