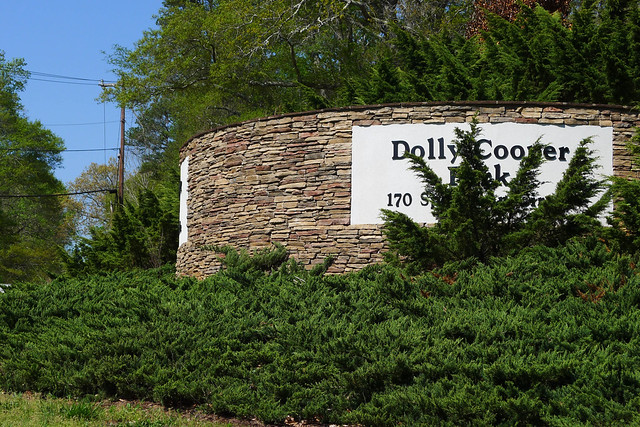 After our Water Wednesday excursion to check out the new ADA kayak launch on the Saluda River in Pelzer I’d mentioned that it was a shame that the one upriver at the Dolly Cooper Park near Powdersville was no longer available. It was my understanding that the park had closed. Turns out I was only partially correct.

Last September I read the disturbing news that the Dolly Cooper Park had been closed due to a lack of funding. I’d never had a chance to paddle from that point, but was looking forward to when I could use that ramp. Anderson County Councilman Ken Waters was responsible for the closure. According to the Anderson Independent Mail…

M.J. “Dolly” Cooper Park in Powdersville has been closed indefinitely, apparently at the direction of Anderson County Councilman Ken Waters.

The closure of the park on the Saluda River eliminates one of the only public kayak launches in Anderson County. It is not clear when, or if, the park will reopen.

Waters, whose district includes Piedmont and Powdersville, recently lost a battle to have the County Council enact a 2 percent hospitality tax. The now-defunct tax came with a 10-year plan for $20 million in Anderson County projects, including $3 million of improvements at the park.

Waters said Tuesday that when the tax proposal died last week, he felt he had “run out of options” for keeping the park maintained and safe.

That was September 26. Just four days later Councilman Waters reversed his decision due to “public outcry.” The park reopened. I was so busy mourning the demise of the park that I’d somehow missed that it had reopened, and was surprised when someone mentioned it after our Pelzer trip this past Wednesday.

And so we come to Thursday…

Ken Cothran and I were out and about on a beautiful spring day and our route took us through Powdersville. I decided that since we were so close we should check out the park. I missed the turn the first time, but found it again without too much trouble. There is a large impressive sign, but the entry road into the park is just a dirt road with no improvements. 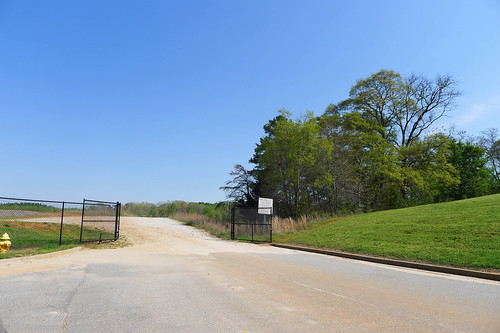 The park itself looks completely abandoned and largely unfinished. There are dirt parking lots on multiple levels, but no attractions for which parking would be necessary. What was supposed to be a ball field is now completely overgrown. There is no playground equipment, or anything else. 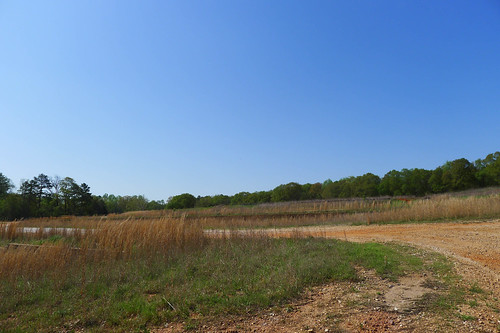 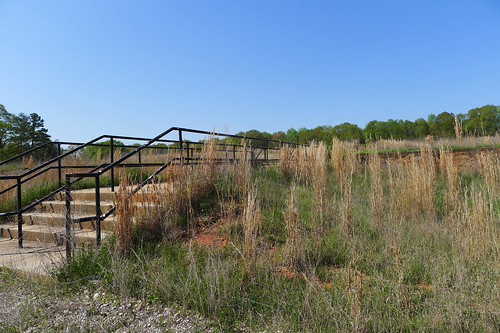 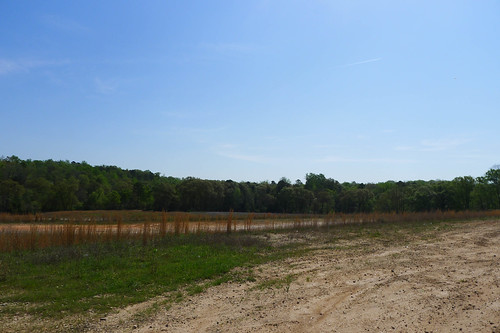 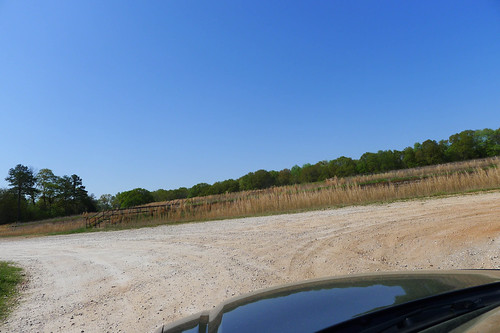 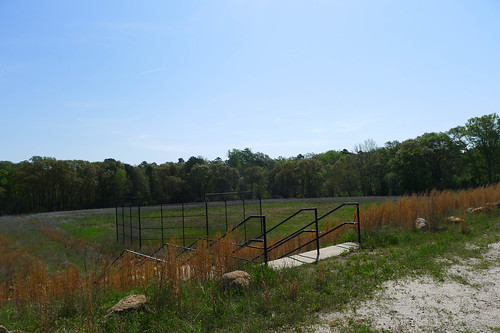 I can see how someone would get the impression that the park is still closed. Apparently one of the problems Anderson County was having with the park was people coming in and doing doughnuts in the grass fields and parking lots and driving four-wheelers everywhere. There had also been lots of vandalism.

The kayak launch was a different story. The dirt road leading down to it looked like it could get dicey if not maintained. 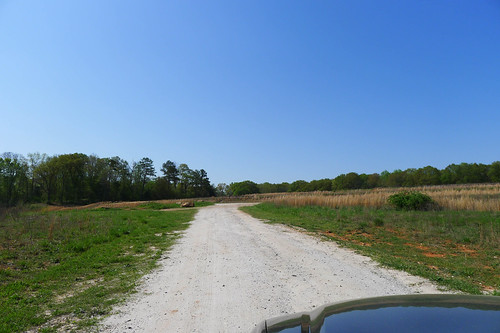 However, the area immediately around the ramp was paved and landscaped. It was as if this were the only part of the park they had finished. 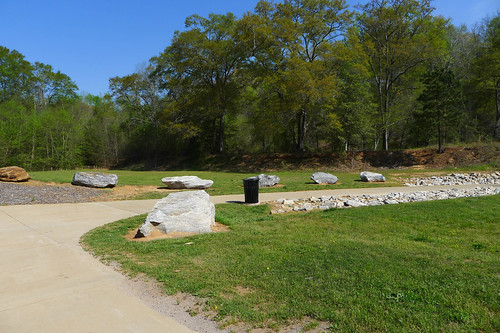 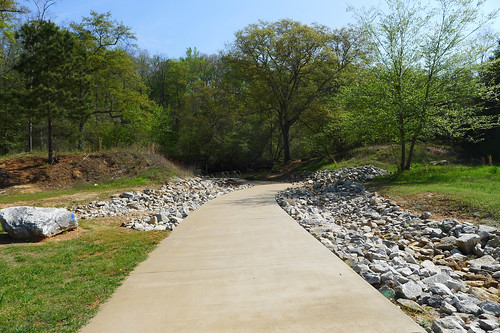 It was like being in two completely different parks. The ramp itself was in excellent shape. 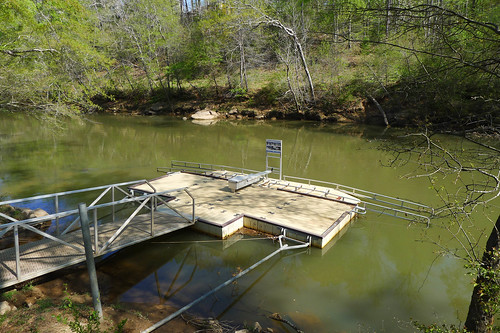 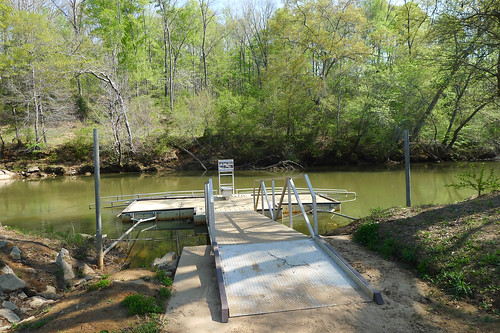 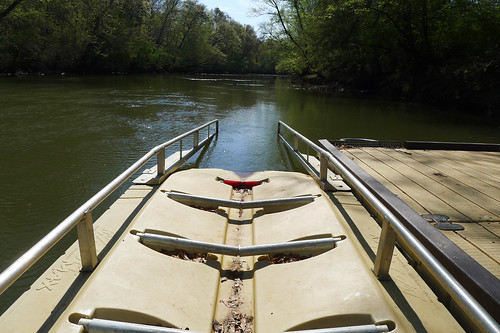 There is a pretty good current here. It would be possible to paddle upstream and back, but it’s more fitting for launching or ending a point-to-point paddle. If you ARE a handicapped paddler, that could be a problem without another ADA ramp downstream or upstream.

The Saluda River Rally is held each June. Here’s a video of last year’s rally. The park looks completely different, and it’s good to see that the spot is being used.

My hope is that the abandoned nature of the upper park doesn’t entice people to mistreat the nice kayak ramp. I wish that the county could at least pave part of that park, even if they aren’t able to add the rest of the amenities. It would be a shame to lose this resource…again. 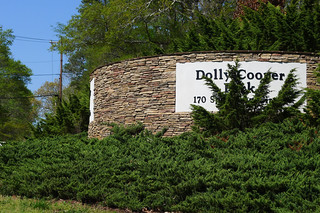 One thought on “Abandoned Dolly Cooper”