I’ve already commented several times that 2014 was a weird year, and one I’m kind of glad to see in the rear view mirror. New Year’s Eve was equally weird. It was the first time in our marriage that Laura and I weren’t together to see in the new year – she’s still in Florida helping with her mom. It was also the first year in memory that I didn’t make it until midnight.

My nephew Chip had invited me over to his house for dinner. Katie was in town with her husband, Aaron, so sister Glynda was there to celebrate with both of her kids. I was able to spend some quality time with my great-Nephew, Ethan, playing trampoline on my stomach. 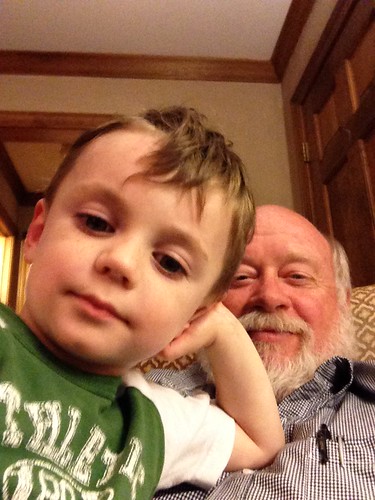 As with my birthday, if I was going to spend New Year’s by myself, I wanted to do something memorable. I decided to venture up to Sassafras Mountain and watch the New Year’s first sunrise from the highest point in South Carolina.

Even though I turned in early, I didn’t get much sleep. The neighborhood fireworks woke me up at midnight, anyway. Then I had one of those weird dreams where I kept thinking it was time to get up. I managed to get up at 4:30, threw on some clothes, and managed to get out the door at 5:00 in plenty of time for a 7:37 sunrise.

The drive up to Sassafras Mountain took about an hour. There were one or two out and about, but I pretty much had the roads to myself. Especially once I turned off of Highway 11 onto 178 headed toward Rocky Bottom things got very quiet – and dark. I had suspected that this might be a great place to come to watch a meteor shower, and it looked like I was correct.

At Rocky Bottom I turned onto the Sassafras Mountain access road and headed on up. It was, indeed dark up at the parking area for the overlook, and the stars were brilliant. There was still some light pollution, but it was one of the darkest areas I’d seen in awhile.

There was one car in the parking area when I arrived. However, I never saw the occupants. I suspect they were out on the Foothills Trail somewhere. The trail crosses Sassafras Mountain, and intersects with the access road multiple times.

I skipped the overlook and walked on up to the cleared summit to check things out before I started hauling up camera gear. There was a faint light of dawn on the horizon, so I didn’t bother with a flashlight. I found a place to set up, then went back down for the gear.

Speaking of gear, in addition to cameras I came prepared for the cold. I had on a thermal base layer, heavy jeans and shirt, wool socks and boots, an insulated vested, and my heavy trench coat. On my head I had a lycra skull cap and on top of that another knit cap. I had a chair and my good sleeping bag for additional warmth, if I needed it. Turns out I didn’t. Even though it was 25º with a stiff breeze, I found myself removing layers. I kind of overdid it. I also had a Thermos of coffee for good measure.

I set up the GoPro camera to do a 5 second interval time lapse. I had the Nikon D7000 on another tripod next to it for still images. In my hand I had the Panasonic Lumix to catch everything else around these two. 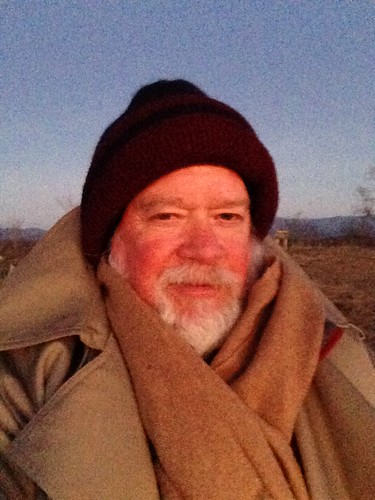 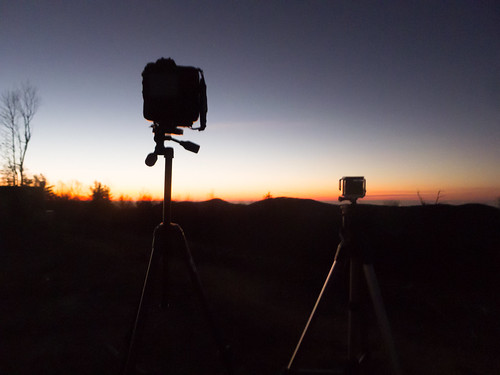 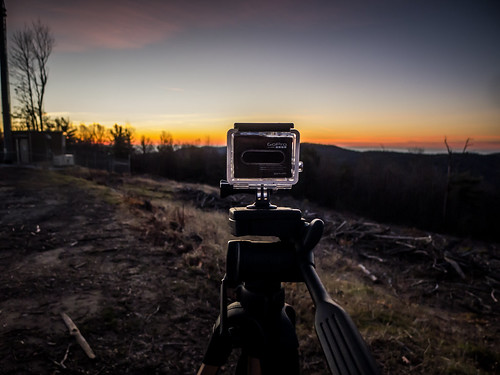 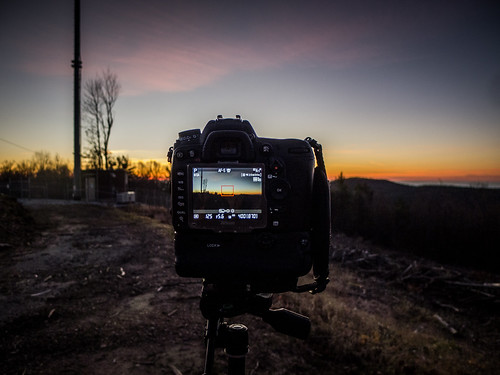 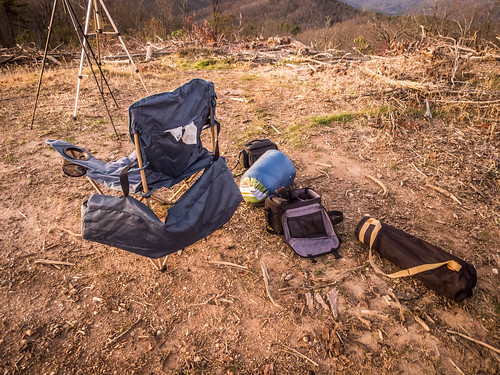 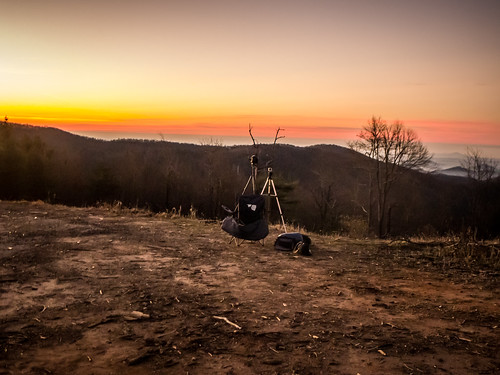 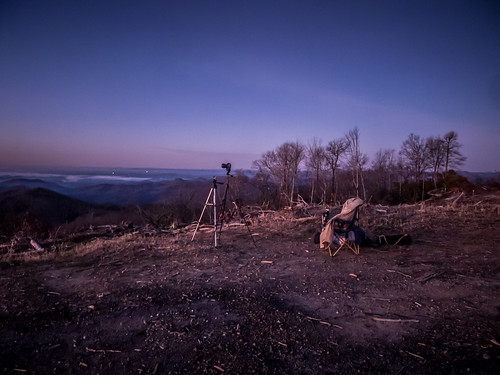 As the sky got brighter I quickly came to a realization. Sassafras Mountain isn’t ideal for watching a sunrise, at least this time of year. While most of the peak has been cleared, Duke Power’s tower and radio repeater station get in the way, and there is a ridge with a tree line right in line with where the sun would come up. Oh well. Bald Rock is better for sunrises, but doesn’t have the panache of “highest point.” 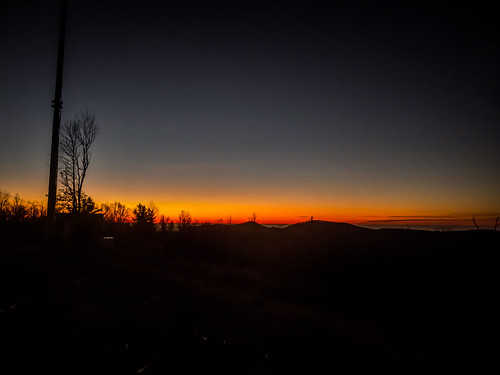 As the sky got brighter, the more interesting views were to the north and south. Fog was filling in the valleys. The layered shades of blue along with the glowing skies made for some fantastic views. I found myself taking the same photo over and over. 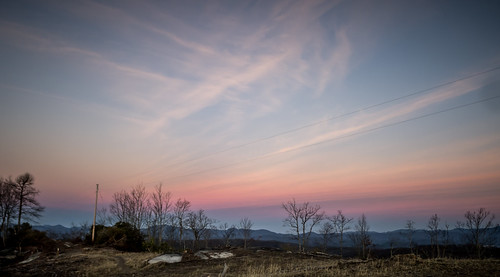 Eventually the sun did rise, just like it does on any other day. Once again I snapped lots of photos, pretty much of the same shot. 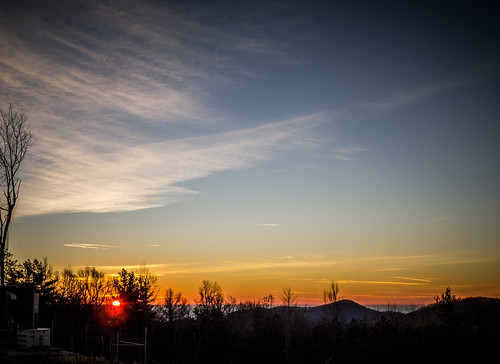 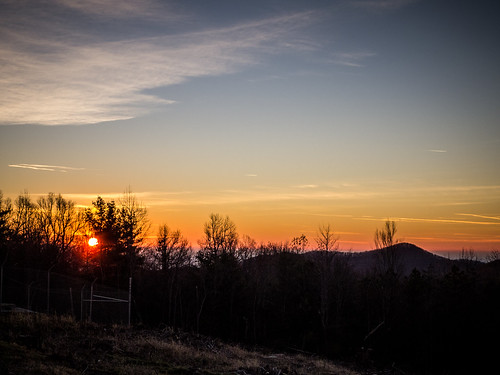 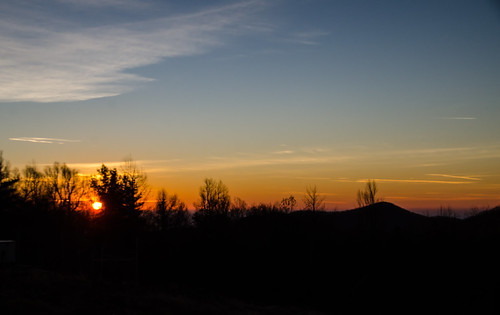 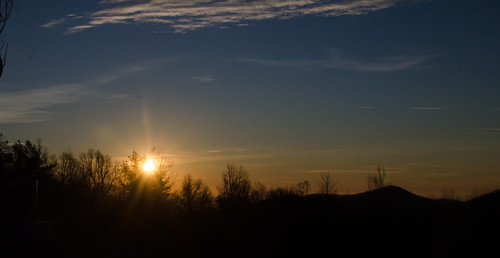 Behind Whiteside Mountain was glowing in the morning sun. The expensive houses on the ridges overlooking Sapphire Valley picked up the morning light and reflected it back onto the peons below. 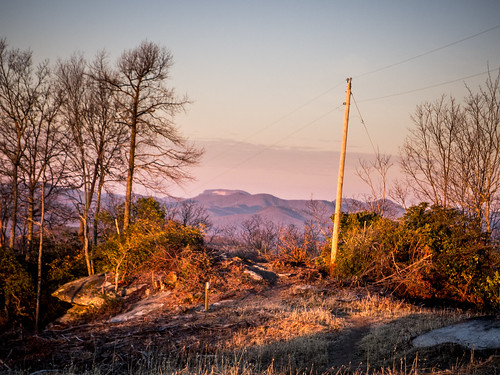 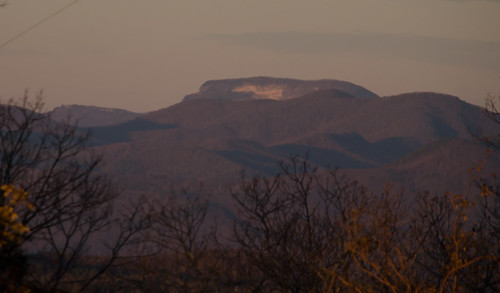 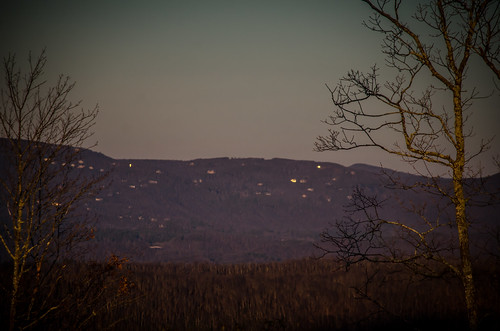 With the sun mostly up, I explored the summit a bit more. The Foothills Trail runs through here, and I followed it away from the sunrise. At the ridge behind the peak the light of the new year had not quite reached the valleys below. 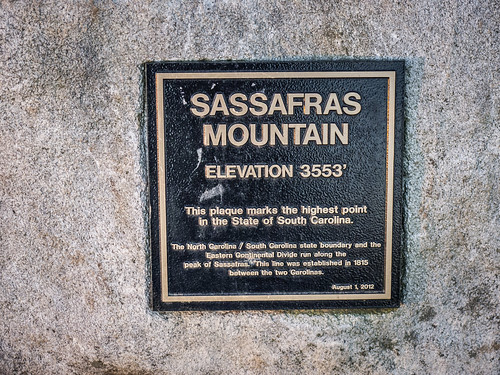 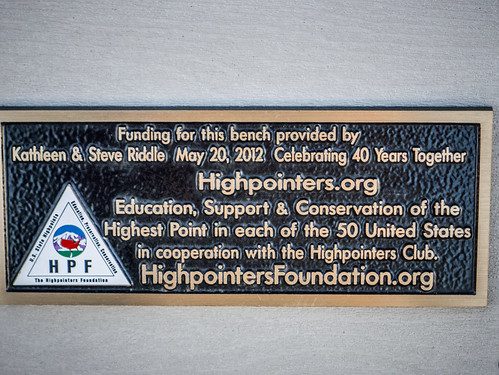 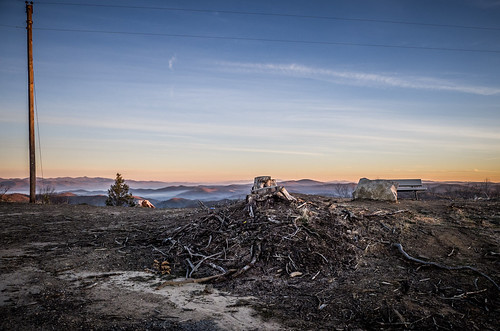 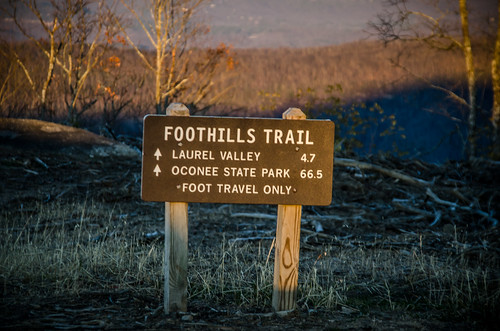 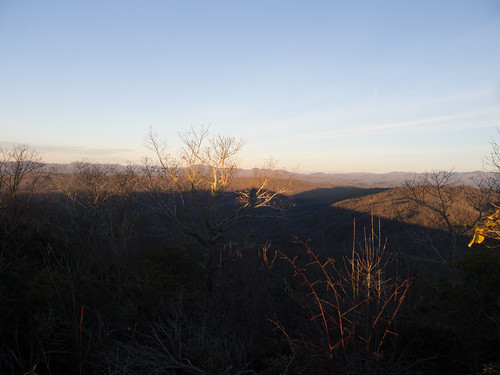 As I walked back up to to the summit the sun was cresting over the trail. 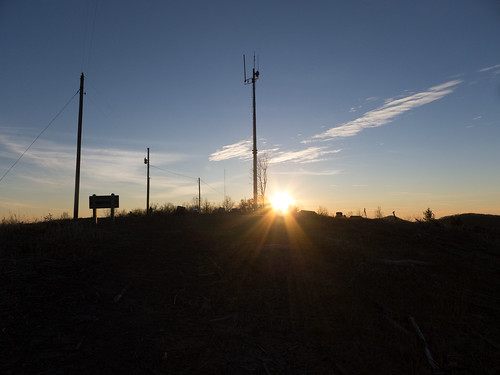 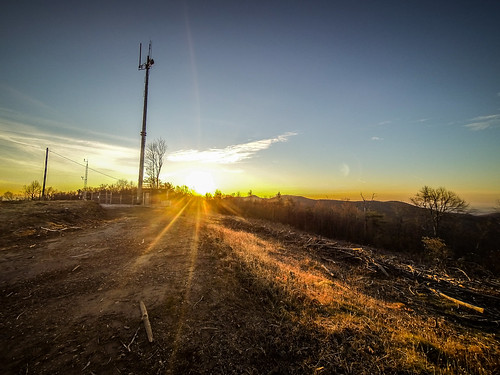 The GoPro had been running for about an hour and 15 minutes. That gave me about 800 shots for a time lapse, which translated to only about 10 seconds of video. I mixed in a couple of titles and a bit of Garage Band doodling to make the finished product.

I gathered up my gear and trudged back down to the car. Once loaded, I took a moment to walk out to the overlook. It looked like the perfect place for a selfie. 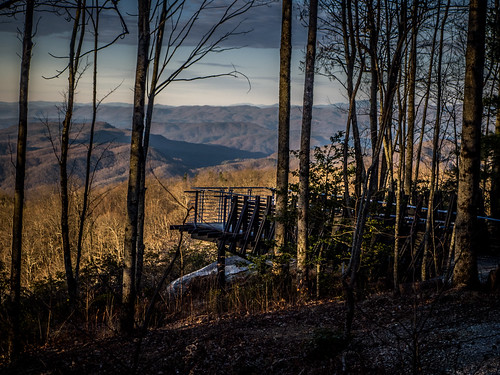 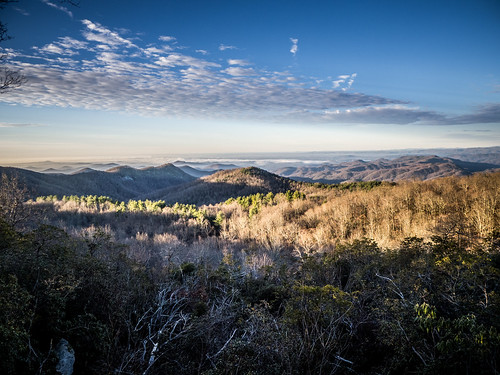 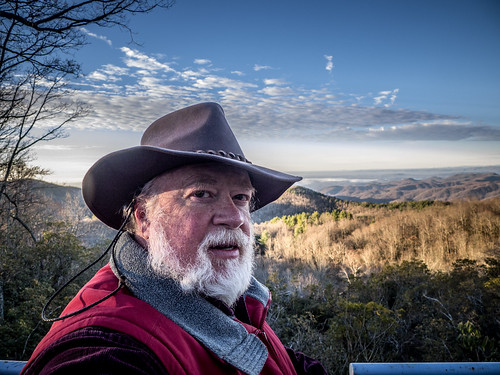 Here’s a slideshow of all of the shots.

It was a great visit, and I was glad I came up here. More importantly, it looks like this is a great venue for watching meteors. However, I don’t know how long that will last. DNR, in conjunction with Duke Energy, is constructing an observation tower with “improvements.” 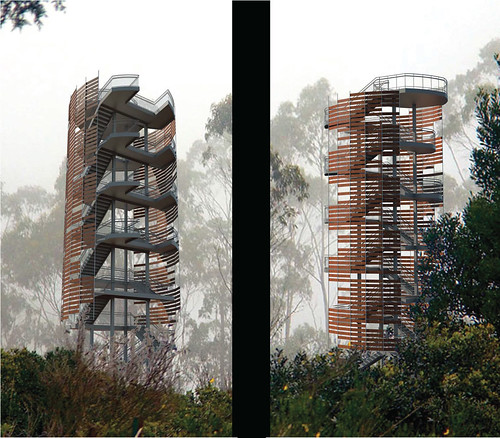 I’m afraid those improvements will include lights that will spoil the nighttime view. I hope not, but I’ve almost resigned myself to losing the ability to see any night sky in this area with out contamination from light pollution. And that’s the true shame. It makes me wish I had come up here for the Geminid shower in December. At least, I was able enjoy a bit of dark skies before the sun came up, and that was the true joy of this New Year’s sunrise on Sassafras Mountain.

One thought on “New Year’s Sunrise on Sassafras Mountain”