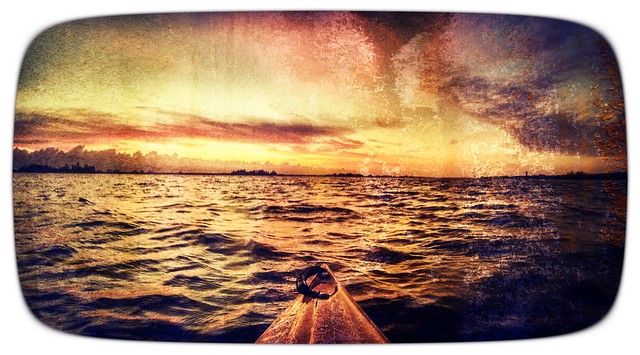 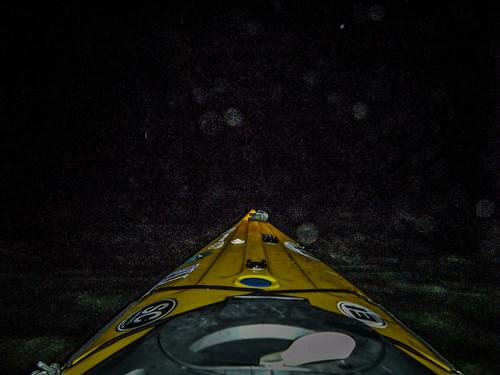 Since I don’t have running lights on my kayak, and since I had forgotten my emergency strobe, I stayed close to the western shore of the Indian River in the flats. I had an LED headlamp, but that was it. 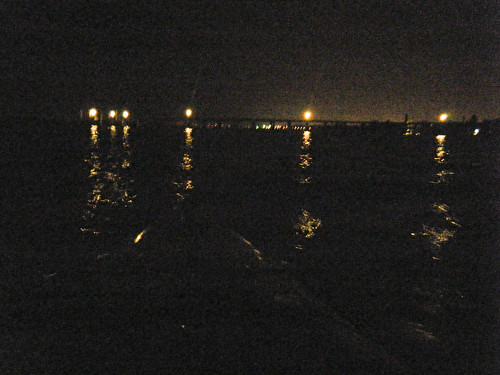 I’ve paddled this area at night before. Since I’m launching from Amy’s back yard, it’s a familiar area and I feel comfortable doing so. One of those previous paddling trips was to watch a night launch of the space shuttle.

This particular evening there was a brisk breeze. Along with an incoming tide, I drifted along. Mullet were jumping nearby, but there seemed to be other unidentified splashes. It could have been my imagination, but I thought I heard an occasional snort. Manatees or dolphins? More likely it was my overactive imagination. 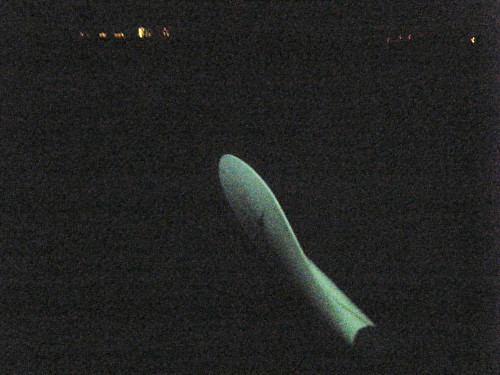 It was peaceful just floating along in the dark. There were stars out, but there was light pollution north and south in Fort Pierce and Vero Beach. I could also see the lights of the condos out on the island. It would have been easy just to hang out all night, but I needed to get back. I didn’t paddle far, but it was enough to serve as an appetizer.

I woke early the next morning, and realized I had time to set out and see the sun rise over the Indian River. This time I was armed with more than my little Fuji camera. I had the full complement – GoPro, Fuji, Panasonic, and iPhone. 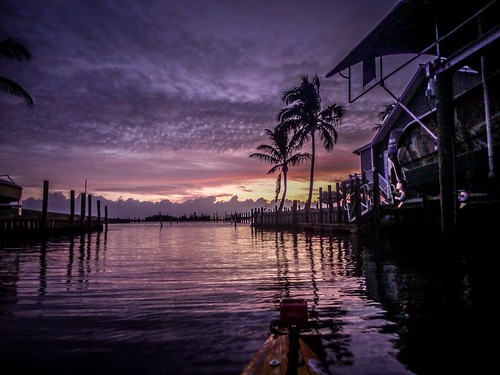 By the time I was heading out of Amy’s channel it was already light, but the sun hadn’t come up. The colors in the clouds were amazing. There was absolutely no way to capture it. 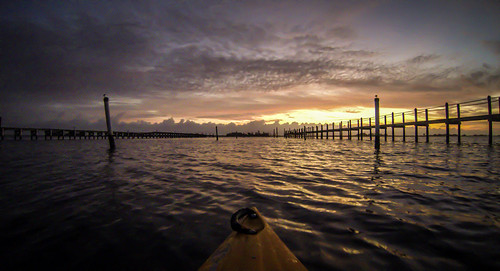 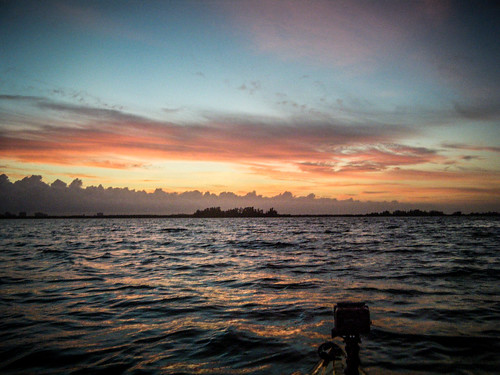 At the end of the channel I turned south toward Fort Pierce. There was a breeze and quite a few waves. once again, there was an incoming tide. I had to laugh, though. As I posted pictures from my phone to Facebook, it occurred to me that some of my friends might think I had stayed out all night.

I crossed the Torpey Channel and paddled out a few hundred yards from the west bank. Many times I paddle out to one of the spoil islands, but without so much as a cup of coffee in my, I wasn’t going to venture too far. I decided to hang out and watch the sun rise over theisland instead. 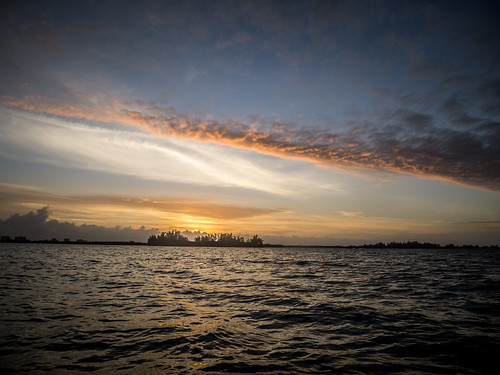 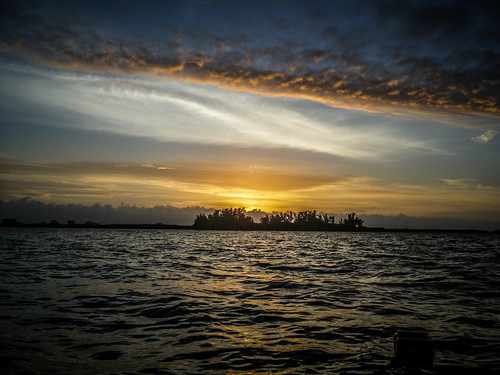 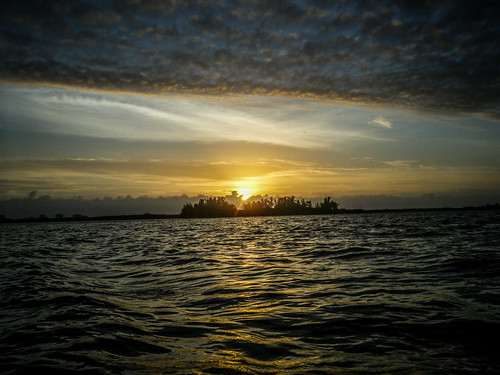 As I was sitting there, where I THOUGHT I was out of the way, a large Hatteras came roaring up behind me. I found myself paddling like hell to get out of the way. I didn’t even hear it until it was almost on top of me. Some young kids were at the helm, and obviously didn’t give a rip about paddlers. The video below shows the boat passing, but with the wide angle of the GoPro the boat doesn’t look very close. Believe me – it was.

I lingered a bit longer. Some gulls flew past. 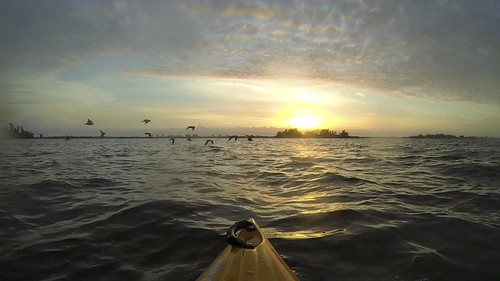 I paddled a bit more, but it was getting choppy.

Again, it was peaceful, and normally I’d keep on paddling. However, it was time for coffee. I headed on back. 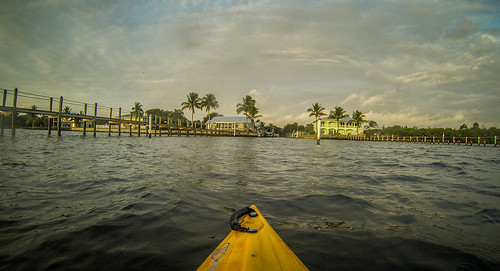 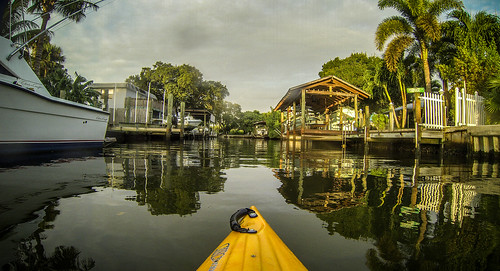 The home health worker was staying with Laura and Amy’s mother, so it seemed like a perfect time for another escape. This time all three of us headed out, and we brought Amy’s dog Luna with us. The target was the Indrio Savannahs, a wetlands preserve just north of Fort Pierce on US 1. 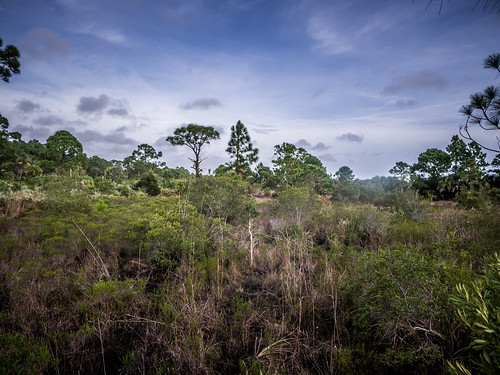 We’ve walked these trails with Amy many times, and I’ve posted lots of photos from those trips here. This time I had the Panasonic camera and my big Nikon with the 500mm lens. Bald eagles had been spotted in the area, and I wanted to be ready. This is also sandhill crane habitat, so I wanted to shoot some of those, too. 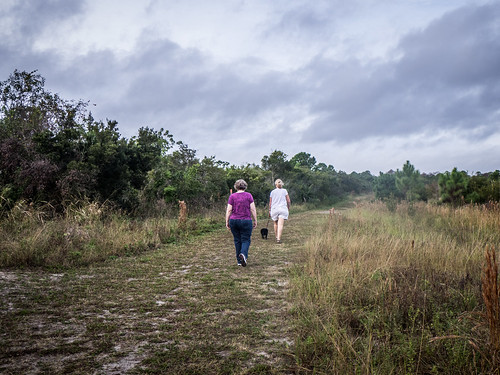 We only had a limited amount of time, and Amy’s dog was recovering from an injury, so we couldn’t walk too far. We walked part way around the pond, then took one of the trails through the pine barrens. This trail led us to the “shrine”, as Amy calls it. This is an odd collection of…stuff – stuff that people have left for one reason or another. Others have been leaving bits and pieces, and the collection has grown quite a bit since the last time I visited. 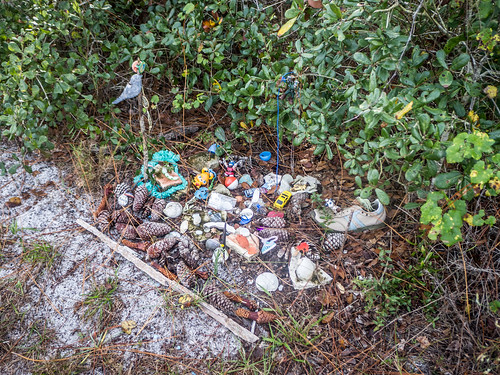 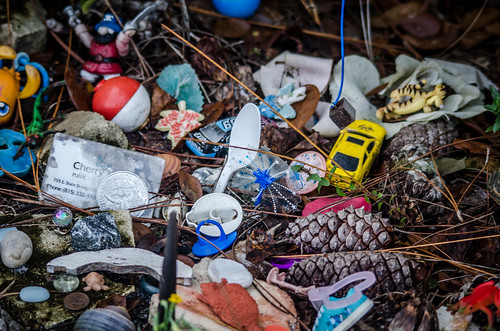 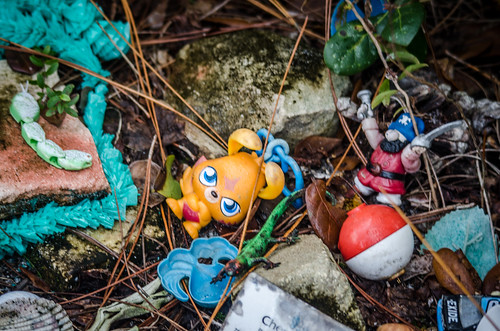 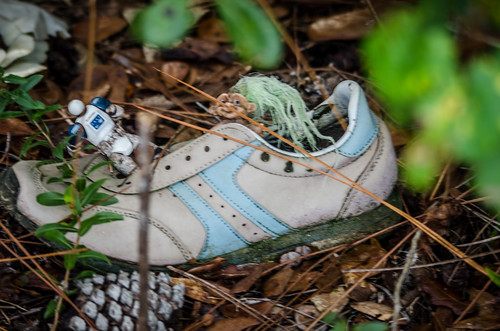 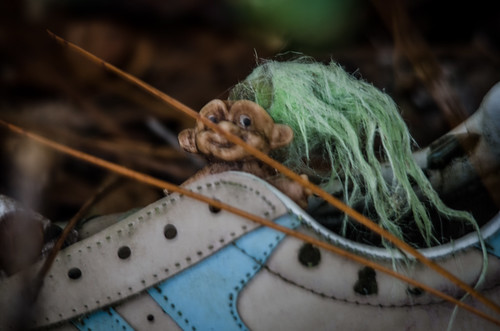 We continued our walk. There are lots of geocaches in the area. We’ve found several, but there are many more. I pulled up one that was in the general direction we wanted to go, so we headed that way. Our path took us across a couple of bridges and led to a levy between a stream and some wetlands. There was an observation bench on the ridge between the two areas. 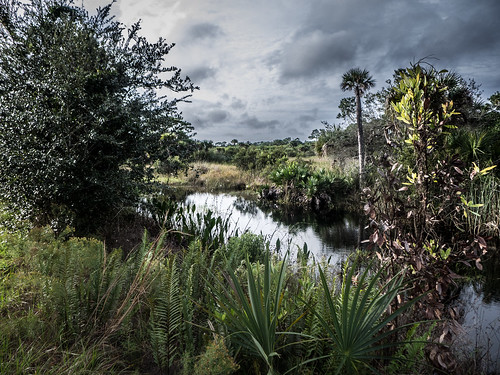 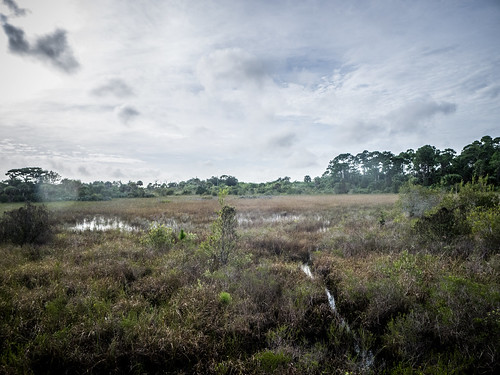 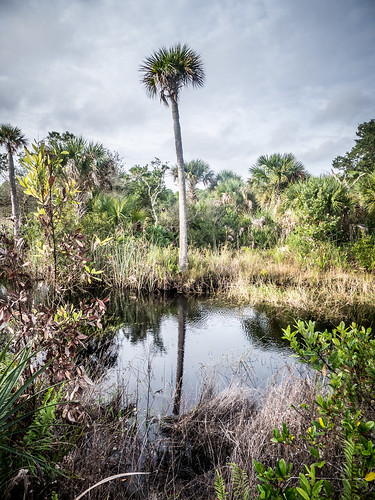 Try as we might, we couldn’t find the geocache. I think the frustration of the “Did Not Find”s (DNFs) is what drove me from the sport. We walked back along the ridge. Not only had we found no geocaches, but the birds were being elusive, too. There were no eagles, and four sandhill cranes flew away before I could get my camera around. Finally we spotted one egret out in the wetlands. 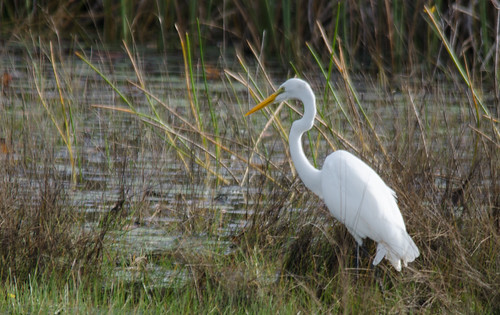 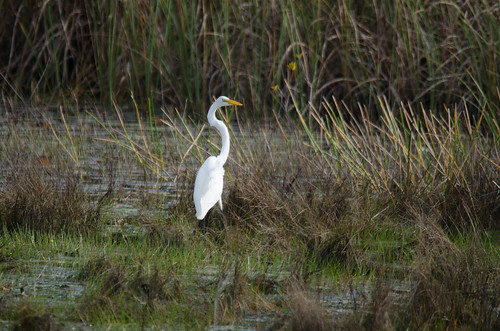 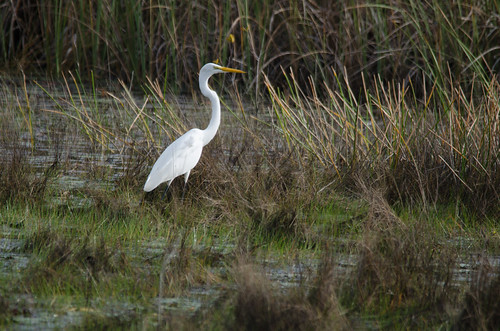 By this time we needed to head back. It was good to have a few more minutes of escape.

Wednesday was windy, cool, and rainy. There were more errands and more visits from various physical therapists and home health care folks. Tomorrow is Thanksgiving. It’s supposed to be clear, but cool. I can deal with that. Perhaps I can get back out on the kayak before our big meal.