I left a rich musical environment in the Pacific Northwest, wondering if I could find something analogous back home. All I’d been able to find before I left for Washington were song circles like the Pickens Flea Market, featuring old country and gospel, or bluegrass at the Oolenoy School. That’s OK in small doses, but not really what I was after.

When I got back to SC I started searching for music groups that might work and I found several events of interest. This week I tried out two different Irish music sessions – one at Ftizpatrick’s Pub in Greenville and one at The Stomping Grounds in Greer.

For the past couple of years I’d followed the Upstate Acoustic Guitarists group on Meetup.com. It looked like they had some interesting events, but for whatever reason I was never able to hook up with any of them. They were the first group I checked for events. I had seen that they held a couple of Irish sessions at Fitzpatrick’s, but these are always on Monday nights when I usually have Greenville Chorale rehearsals. Since Chorale hadn’t started back up, I took the opportunity to attend their Slow Celtic Jam this past Monday. 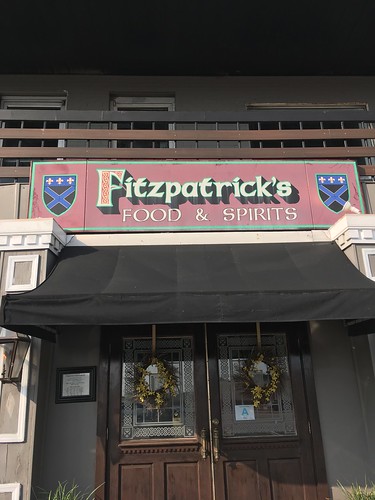 I liked the idea of a slow session. I had no idea if they allowed music or what I’d be facing so this would give me a chance to ease into things. To be quite honest, after the snobbery of the PNC Irish groups I was a bit leery.

I arrived at Fitzpatrick’s and found the place fairly sparse. I asked the bartender, Patty, if they were still having the session. She said she didn’t know, that there was just this one guy playing. Hmmm.

I wandered over and met Dwayne Grassie. He said that this was the session, but often it was just him with his guitar singing. OK. I ordered food (wonderful deep-fried artichokes) and a beer (Guinness) and got my instruments together. Our shipping crate hadn’t arrived with the rest of my music gear, so I had my Alverez guitar, my melodica, and my Killarney whistle. 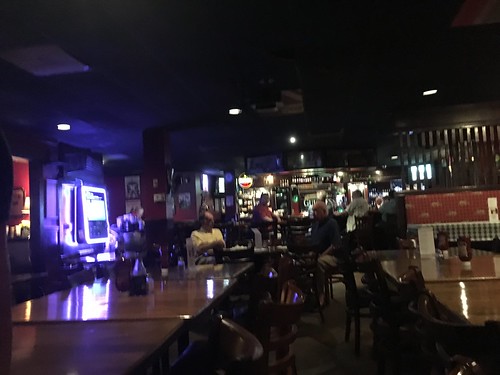 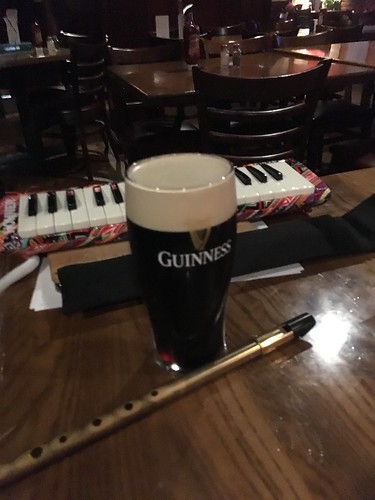 Dwayne and I played through several tunes. Since he was on guitar and I had melody instruments I mostly played melodica and whistle. He had some tunes with which I was unfamiliar, and I had some he didn’t know. Here are three samples from the evening. First up is Inisheer with me playing whistle.

This next one I’m playing Maggie West’s Waltz, also on whistle.

Finally, here we are doing St. Anne’s Reel with me on melodica.

The evening was…interesting. It was more of a practice/learning session taking place in a bar. It felt a bit weird, and I wondered what the other pub patrons thought of us. Dwayne said that usually there were others, but often it was just him. I asked about the upcoming “Traditional Irish Session” listed on the Meetup website for Monday two weeks hence and he said it would probably be just him. When I mentioned that I usually have Chorale on Monday nights, he asked if there any other night that would work for me. I guess he gets lonely by himself.

Dwayne plays with a group called the “Accidentally Irish Lads”. There’s also a bit of “small world syndrome” taking place. Dwayne was active in the local American Chemical Society and knows Laura as well as other members of the Furman Chemistry Department.

It was a good evening and I had fun, but it still wasn’t quite what I was after. I was hoping to find an active group.

By Tuesday our shipping crate had arrived in Greenville. It wouldn’t be delivered to our house until Friday, but at least I was able to gain access and get my instruments out of the heat. I think I have tripled the number of black cases for which I have to find homes. 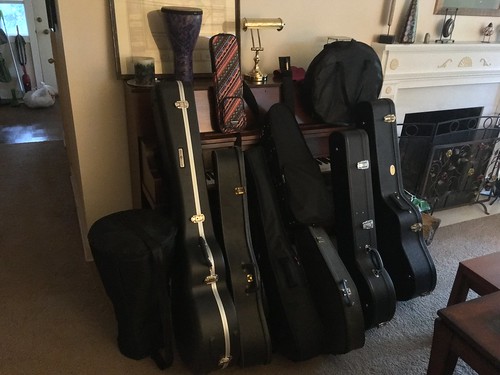 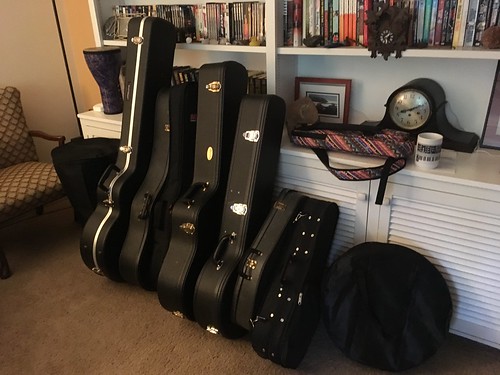 I spent a good bit of the day reconditioning the stringed instruments. I had loosened everything before shipping, so I had to get it all tuned back up, acclimated, then retuned. Houston had given me a Peavey wedge amp so I had to try that out with my Martin and with the bass guitar. 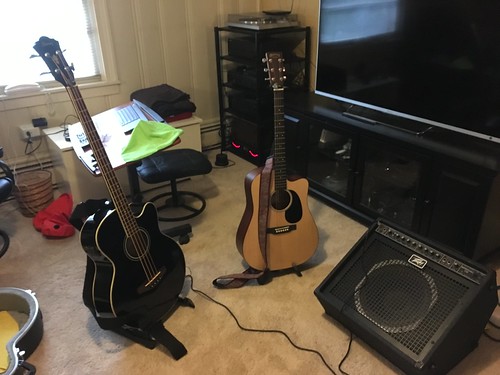 I’d be able to take the Martin to the next gig, but the banjo would have to wait until I could calculate proper bridge placement (which is a pain.) Regardless, I was ready for the next session on my calendar.

I used to have an occasional lunch at The Stomping Grounds Coffee Shop in Greer when I worked in Spartanburg Five. I had seen their posters and announcements for musical acts including Celtic sessions, but had never gotten around to visiting. I checked their Facebook page to see if they were still active, and found a listing for a “Celtic Session with the band Skeezix.”

Again, I was a bit leery. Was this truly an open session, or just a performance by this band? How strict were they going to be with their interpretation of what’s proper for Irish sessions? At least I felt assured that a “band” meant that there would be more than one guy on a guitar.

I found a parking spot right in front of the venue so I left the instruments in the car to scope the situation. There were some chairs set up in a circle in the back, but no musicians in sight. The woman at the counter confirmed that this was the correct night and that it was happening. I ordered a coffee and waited.

Soon I spotted a guy with a mandolin case and introduced myself to Joel McConnell and his wife Suellen. Joel said that this was an open session and that I was welcome to join in. I went back to retrieve my instruments.

Also joining us in addition to Joel was a button accordion player, a rhythm player, a fiddler, and a flute/whistle player, all of whom I met, but promptly forgot names. There were two other guitarists – a guy named Mike and a surprise. Judy McKinley and I had sung together in Chorale and at parties at a mutual friend’s house, She would be playing guitar as well.

In all there were eight of us playing. The session was more like the ones I’d attended at Village Pizza or Honey Moon Meadery. Generally the tunes weren’t announced, and I was the only one with music on my iPad. Everyone else played from memory. I did the same most of the time.

As with other sessions I’ve attended, we went around the circle suggesting tunes. One big difference was that there was also singing. Mike sang a Clancy Brother’s variation of “Sixteen Come Next Sunday.” 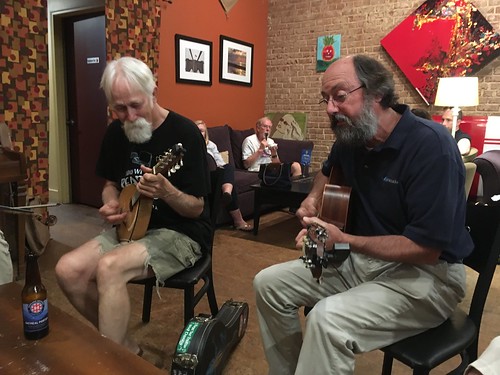 Here’s a recording of that song:

Judy also sang a song when it came around to her. 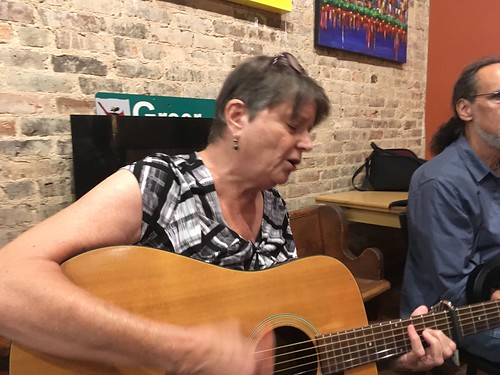 Most of the tunes were traditional. I’ve started recognizing them and did a better job of keeping up with the chord changes, but I’m still not good with titles or remembering the exact melody. I played mostly guitar, but occasionally played whistle. Here are two more recordings. The first is a strathspay whose name I can’t remember, followed by Dennis Murphy’s Reel.

We played for a couple of hours until the coffee shop closed. All of these guys were skilled musicians and sometimes I struggled to keep up, but they were all very friendly and I got no scowls like I occasionally did out west. Honestly, I had a blast.

This session meets every first and third Wednesday. I think this will be my go-to venue for Irish music sessions. As much as I enjoyed playing a duo with Dwayne at Fitzpatrick’s, I much prefer a larger group. Plus, there isn’t the conflict with Chorale rehearsals.

But this isn’t it as far as music sessions. I’ll be back at The Stomping Grounds next Tuesday and Wednesday. First up is an Old Time Mountain Music Session led by Bob Buckingham from the John C. Campbell Folk School. On Wednesday a group of ukulele players gathers at the coffee shop.

Here’s a quick rundown/summary of the music sessions I’ve found so far. Some of already visited and written about. Some of these have more appeal to me than others.

…and these are just the ones I’ve found in this area. I’m sure there are lots more than haven’t come to my attention. The Blue Ridge Music Trails website lists many more in Western North Carolina that I might want to try sometime. Most of these are Bluegrass or old time country and gospel. Meetup groups like the Upstate Acoustic Guitarists and WNC Musician’s groups also hold informal jams and gatherings.

So it looks like I can keep at least as busy musically as I was in the PNC. The groups will be different, and I’ll still miss the friends I made out west, but at least I won’t be lacking places to play.