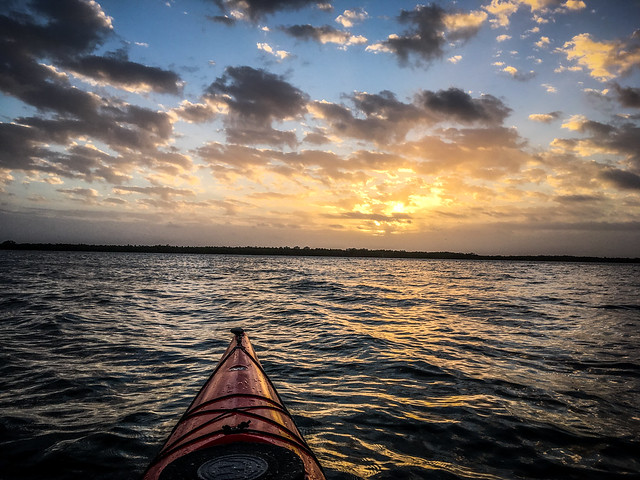 When possible I’ve tried to watch the sunrise from a kayak on the solstices. Winter solstice we’re usually in Florida for Christmas. Last year we missed it while we were away in Washington State, but this year I was determined to get out for the sunrise. The added bonus? I had two new boats to christen.

Backing up a bit…

Earlier in December Confluence Watersports held its annual factory warehouse sale. I was looking for two specific boats and I was able to find both. My brother Houston has a 12 ft Dagger Axis, a hybrid boat that has some rocker like a whitewater boat for maneuverability, but also has a drop skeg for straight tracking. I also wanted a longer touring boat with a rudder, something at least 16 feet long. I found the Dagger and a Wilderness Systems Tsunami 175, which is 17 ft, 8 in long. These would be my birthday and Christmas presents for this year.

The big Tsunami wouldn’t even fit into the back of my truck without threat of dragging it on the highway. I had to get creative in order to get it home. About the time I got them home it started snowing, so all I really had a chance to do was attach the rudder to the Tsunami and adjust the foot pedals for both boats. I’d have to wait until the Florida trip to actually get these into the water.

Even with the excessive length the Tsunami fit on top of the Subaru with no problem. We drove down through stormy weather while pulling a U-Haul trailer, so it was a bit more challenging that some times.

The day after we arrived in Fort Pierce was the Winter Solstice. I got up early and set out in the Tsunami. It took some getting used to the rudder. Like steering a car, small motions work best. I also discovered that I need to set the pedals a bit closer than I’m used to because I have to extend each foot to control the rudder. My thighs and calves were getting more of a workout just from this motion.

It was chilly and quite breezy. The big boat seemed to handle the rougher water with no problem. I can’t say whether or not this boat is faster than my Tsunami 145; it’s certainly not any lighter. However, it seemed to be more efficient. The 145 doesn’t have a rudder. I have to use the paddle to steer, so energy that would go into a forward stroke has to be re-directed toward course correction. With the 175 all of the paddle stroke energy goes into forward propulsion while the rudder does the work of steering.

There’s a little sand bar out on one of the spoil islands where I like to pull up and watch the sunrise with a cup of coffee when I do these early paddles. I had my coffee, but the tide was high and the sandbar was submerged. The wind and tide pushed me along as I tried to alternately take a sip, then take a photo of the rising sun. I hung out until the sun cleared a cloud bank on the horizon.

Even though I had my GoPro mounted to the boat with a suction cup mount, I’d accidentally left it in night time lapse mode. All of my GoPro shots of the sunrise were overexposed. Oh well.

The wind was really picking up and I needed to get back I made the crossing through the shipping channel and back to the mainland side, then back to Amy’s house to warm up.

After running a few errands and getting some things done around the house it was time to try out the other boat.

By the time I got around to this boat the wind picked back up and it looked like a storm was on the way. I had a short window of opportunity, so I headed out anyway.

My plan was to stick close to this side of the river and explore some of the old mangrove-covered canals. This boat wasn’t really designed for open water. I knew it could handle the waves with no problem, but getting it across the channel and battling winds would be a chore.

I started out with the skeg up. As soon as I stopped paddling the boat would try to Crazy Ivan. When I put the keg down it would track straight. In other words, it was doing exactly what I expected it to do.

Since the wind was a bit crazy I paddled around the corner to the abandoned canal on the other side of Amy’s street. This canal is now overgrown with mangroves, so it was the perfect place to test the maneuverability of the Axis.

The boat performed beautifully. I was able to get back into the mangroves with no problem. The biggest issue I had was with photography, The boat had a tendency to rotate while I was trying to take a shot. My waterproof point-and-shoot isn’t the fastest camera, so I think it would do better with a DSLR.

While back in the abandoned channel the wind started howling and it started dumping rain. I was somewhat sheltered under the mangroves, so it didn’t bother me. The storm passed quickly and I paddled back out and around the point to return to Amy’s boat ramp.

Both boats performed as I expected. I had gotten them for specific purposes and it seems that they are well-suited for those conditions. I liked the fact that my spray skirt fits both boats, especially in the paddling conditions that I faced on this day.

With its rudder the Tsunami 175 is more maneuverable than my 145, even though it’s longer. It had some other idiosyncrasies, though. It has a back band instead of a seat. It’s not quite as comfortable and it also limits the amount of storage behind the seat because of additional straps. I was able to wedge my camera case and a couple of water bottles behind.

As with my 145 there is a day hatch behind the seat. This opens onto a separate section with its own thwart, which my 145 doesn’t have. This means that gear put into this section won’t get lost or roll further back out of reach. That kind of makes up for the lack of storage behind the seat.

The 175 also lacks the paddle holder found on my 145, which I’ve found to be very convenient.

As for the Dagger Axis, the seat is extremely comfortable and there is storage behind it, though it’s not as accessible as my Pungos. There is also a nice bottle holder just in front of the seat. It does have a paddle holder.

When I paddled Houston’s Axis (that sounds kind of funny when you say it out loud) I noticed an annoying bumping sound when the skeg was down. It tended to flop from side to side. I didn’t notice that as much with this boat.

Neither boat has the convenience of the deck consoles I have on the Pungos or on the Dirigo, but I have an add-on deck back for my 145 which will fit these boats. I may have to pick up one more in case someone goes with me.

So why buy two more boats when I’ve got another dozen at home? I wanted the Tsunami 175 to reach the distant waterfalls up on Lake Jocassee. This also gives me two touring boats should Laura or someone else want to go with me. As for the Dagger Axis, it’s the perfect boat for exploring Upstate SC rivers like the Enoree, Tyger, Saluda, or Turkey Creek. Since it can pivot it will handle small rapids. My other whitewater boats are sit-on-tops so I don’t feel as comfortable taking them out in colder weather. This will give me the option of year-round paddling on these smaller rivers. I think these were two good additions to my fleet.