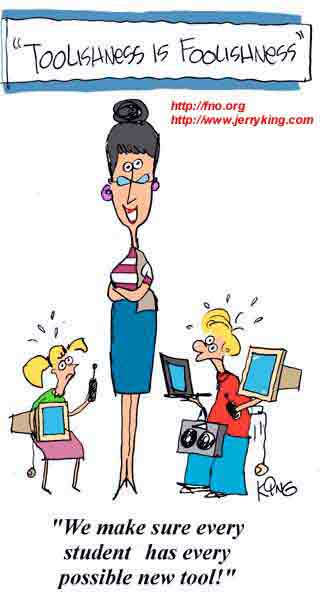 When I started out in educational technology I had next to no budget for equipment.  I had 12 computers in my classroom, eight of which would run Windows 3.1, and the rest limited to DOS.  I became a big fan of Fred d’Ignazio’s Multimedia on a Shoestring Budget, collecting old VCRs and other cast-off gear and putting together a system where my students could create some pretty amazing projects. My, how times have changed.  I have just purchased 1500 computers for my district – computers with huge amounts of memory, disk space, and processing power compared to those early days.  As nice as this sounds, I now also have about 1200 old computers that I have to deal with.

What to do with old equipment.  This is a constant problem, not just for technology directors, but for any company that refreshes its equipment. However, there are additional concerns for public schools.  The public questions why we would be removing equipment that still works.  One of our neighboring districts got into trouble with the local newspaper for disposal of working computers in the local landfill.  My own experience wants to keep these computers and just reuse them in the classroom, so I can empathize with those teachers that don’t want them taken from their rooms.

Sometimes I wish the phrase “equipment life-cycle” had never come into being.  I do truly think it’s a conspiracy of technology companies to get everyone to buy new gear every three years. Computers last much, much longer than that.  Mine at home has lasted me for six years, and only in the last few months has been acting like it needs replacing.  What’s worse, with the help of the Gartner Group’s Total Cost of Ownership concept, we have created an entire rationale for buying into this three-year life-cycle.  It goes something like this…

These are all viable arguments, but sometimes the public and our teachers have a hard time accepting them.  We as a district are working to counter the licensing argument by factoring the cost of software licensing into the overall cost of purchase, which might give reason to keep the old equipment around longer.  However, the third argument is what is killing us this time.  We’re trying to replace so many computers because we’re moving from Windows 98 to XP across the board.  Theoretically, in subsequent years we could hang onto equipment a bit longer, but who knows what we’ll have to deal with at that time?

Back to the TCO concept…what does it take to put one computer on the network?  What factors should be considered?  Obviously the price of the computer, but what else.  Here’s a short list of the costs that many people don’t consider:

All of these factors add a significant amount to the cost of the machine.  Even smaller nickel-n-dime costs can be enormous. These add up when multiplied by the volume of units I purchase.  For example, adding asset tags to our machines “only cost $5 per unit.”  Multiply that times 1500, and that adds $7500 to the overall price – quite a chunk of change.  It’s enough to make one want to avoid upgrade fever all together. 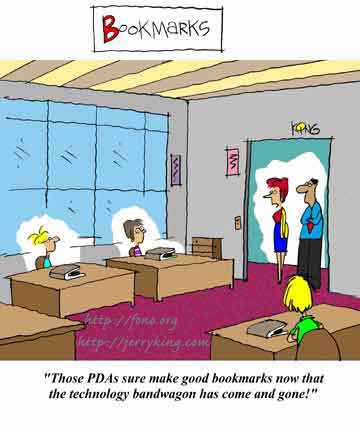 This “upgrade fever” extends far beyond computers.  Digital cameras are a prime example. We have an old Nikon F5 that belonged to Laura’s father. Nearly 40 years old, it has great optics, and takes wonderful pictures.  It uses the same 35mm film as today’s non-digital cameras.  Compare that to digital.  In the 10 years or so that that digital cameras have been commercially available, we have gone from 640X480 images to multiple megapixel images, and the types of media for memory and storage have changed drastically, not to mention the modes of transfer to computer and printing.  The rate of change has increased even more in the past couple of years.  Camera obselescence now mirrors computer obselescence.  I can’t see any of today’s digital cameras being useable 40 years from now.

As a gadget person who loves innovation, and would love to have the latest and greatest, it still bothers me that more and more things don’t last.