Since that failed so resoundingly, I decided to try another target, one a bit closer to the lens where action could be observed more clearly – daffodils in bloom. I moved the Raspberry Pi rig to a clump of daffodils and set it to run at one frame every five minutes, the same I used for the beaver dam time lapse.

I let the routine run, monitoring it closely from inside.  I had noticed a lack of sharpness in the image in my last attempt.  I had even bigger problems this time.  The HUE webcam would not adjust to bright sunlight.  Many of the images were completely washed out, as in these two examples: 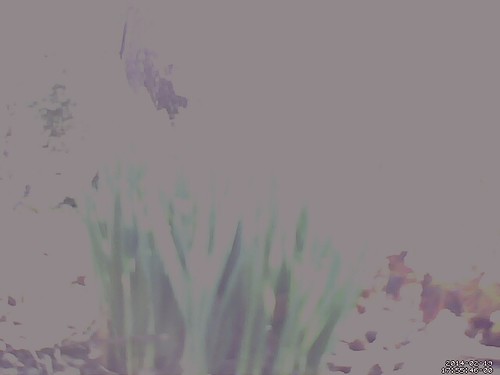 Even when the lighting was good, the flowers themselves were out of focus.

The best images were captured either early morning before the sun even came up, or late afternoon. Even some of the night shots were OK when we had the backyard light turned on. I kept at it, though. The camera ran for a total of four days, and captured nearly 1500 images.

Regardless of problems, I made a time lapse of ALL of the images, including the washed out images and the ones taken at night. You can still see some cool movement and flowers opening – shades of things that might have been, had the camera cooperated. It’s interesting to note that the flowers open, then close at night, then re-open. These appear to be jumping around, but the images are, in fact, in the correct sequence.

I went back and tried to eliminate the images that were completely unusable. Some of those that remain are still washed out, but as long as I could see the flowers, I kept them. It didn’t really improve things, and made the video appear even more disjointed.

The other thing I failed to take into account was the fact that flowers grow. They get taller. In fact, they almost grew out of the frame. I knew I’d have to compensate for that on the next attempt.

Speaking of the next attempt…

I found another clump of flowers in the front yard that are starting to bloom. These are on the north side of the house, so they don’t receive direct sunshine. Lighting should be much better, and I shouldn’t get the washout I did with the ones in the back yard.

The image even appears to be more in focus this time. 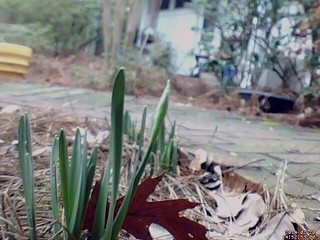 I’ll let this run and see what results I get. One thing I have definitely learned is that the HUE cam is best suited for use inside a classroom as a document camera. At least it was free. I’ve got a couple of other webcams, and I may see if I can get better results with them.