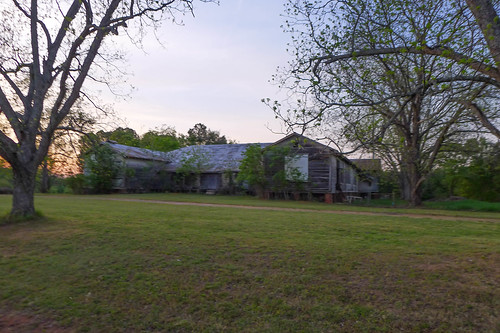 A follow-up to the previous post’s mystery Rosenwald School. Fellow explorer Mark Elbrecht left a comment on that post with some clues as to the identity of the school we found in Butts County, Georgia. Unfortunately, that opened up an additional can of worms and conflicting info.

Mark found the school on two old Georgia DOT maps. Here it is labeled as “Tussahaw School” on the 1949 map: 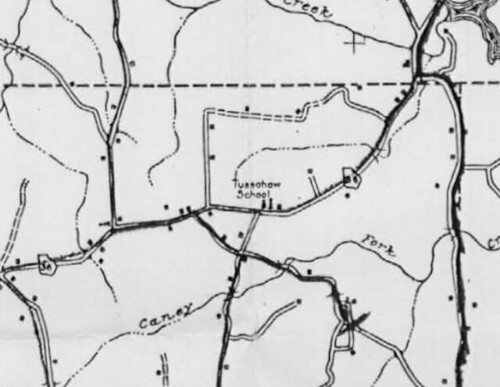 That gave me a name and a new search term. However, when I did a preliminary search for Tussahaw School the main hit was for Tussahaw Elementary, about 20 miles to the northwest in Henry County. The name does not appear in the Fisk Rosenwald Database.

Further confusing matters, a history of Butts County is posted on the City of Jackson’s website, and it further muddies the water. Regarding a Rosenwald School it has this to say…

In October 1928, H. M. Jones, principal of the colored school in Jackson, was soliciting funds to build a Rosenwald school in Jackson. Such buildings were partly funded by the Julius Rosenwald Fund, which was responsible for aiding the construction of one of every five Negro [sic] school houses in the south at the time. However, there is no indication that such a school was ever built in Jackson.

Yet, there are multiple references to Tussahaw School. Here are some examples:

City officials called for an election on June 15, 1943 in response to a petition signed by more than one-fourth of registered voters in the city asking that the city’s independent school system be abolished and merged with the county’s school system. According to state officials, if Jackson: A History of the Middle of Georgia 247 the two systems merged, the county school system would receive an additional $5,000 annually from the state. The question of consolidation, which had been agitated for months, was brought about by the wartime conditions.

On the day of the vote, 155 citizens cast ballots in favor of consolidation, while 68 voted against. As a result, the Jackson school system ceased to exist and joined the Butts County school system, which included consolidated schools at Jenkinsburg, Indian Springs, Tussahaw, Towaliga and Pepperton.

In the same document several people who had attended the school were interviewed.

“I went to Tussahaw School the first six years, then transferred in to Jackson,” said Gwen Mitchell in 2009. “That was when the school’s were combined.” A school bus picked her up at home and took her to school, both at Tussahaw and Jackson.

“It was a lot of people and it was big compared to Tussahaw,” Mitchell said of her first impressions of the Jackson school. “At Tussahaw, you had 15 maybe 18 people per class, and you just had six classes. You had all the county schools coming in to Jackson [in the seventh grade]. I think there was two classes [of seventh graders]. We had a blackboard and little small desks with a place underneath for you to place your books, and we had windows on one side so it wasn’t completely closed off.

“We had lunch at school,” she said. “There was a lunchroom. Seemed like we’d take a dollar a week and could eat all week and had money left over for extra milk or ice cream. And you had a good, hot lunch. We had recesses after lunch – you either went to recess or physical education. I played basketball, and the ones that played football or basketball had a 45 minute break for what we called activities. The gym was behind the school building. It was one huge building with bleachers on both sides. It was fun [to play basketball]. It was good exercise. We didn’t travel to play that much, maybe to Locust Grove and Monticello. I think Indian Springs and Tussahaw still had schools at that point, too.”

The comment about the windows certainly make it sound like a Rosenwald school. This next quote talks about bussing, and the possibility that this started as a white school, then reopened as a black school.

“In ‘49, we got the first buses” at the Henderson School, said Curtis Gaye in 2009. “And the reason we got them is because in ‘49 the county opened up some satellite schools, like Tussahaw and Indian Springs. These were former White schools that had been closed up. I don’t know if they were opened to relieve crowding at Henderson or not, but it was part of consolidation. There were a number of church schools, as many as 15 or 20 maybe. This allowed them to bring in church schools. In order to get the students to Tussahaw and Indian Springs, you had to have some buses. It was too far for some people to walk. So we had four or five buses. These were the types with bench seats that ran the length of the bus down each side and in the middle there were two with a common back. Not very comfortable, plus when the bus stopped you had to hold on with everybody sliding around.

“But I didn’t ride the bus,” added Gaye. “By that time, we had moved to [Highway] 36 [near Stark Road]. I could have caught the bus and gone to Tussahaw, or I could continue to come to Henderson. I was in like sixth or seventh grade. So I continued to come to Henderson. When the new school was built in 1955, all of the old schools were consolidated, were closed.”

Unfortunately, while this does confirm the identity of of the school, it doesn’t its status as a Rosenwald School. Yet the architecture is clearly Rosenwald.

Normally newspaper archives provide some insight. However, I wasn’t able to turn up any references. Mark suggested using the phrase “Tussahaw Consolidated School”, yet that returned only references to obituaries.

So, the school remains a mystery, but I shall continue searching. I don’t like to leave a mystery like this unsolved. 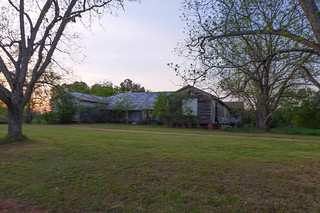 5 thoughts on “The Unknown Rosenwald”