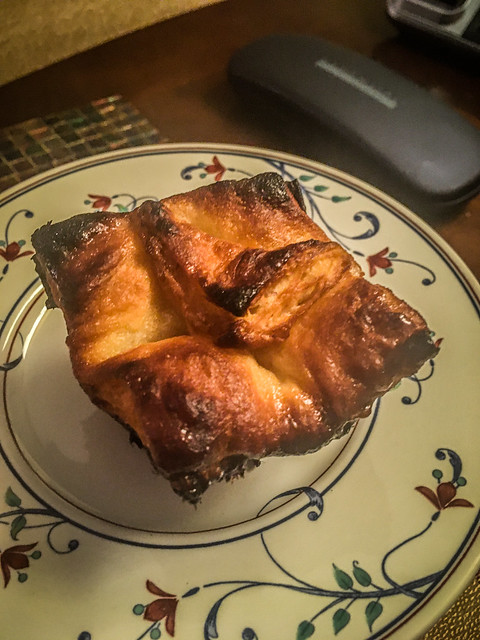 Kouign amanns (pronounced “queen amahn”, are an incredibly decadent pastry from Breton. According to Wikipedia, it is described in the New York Times as “the fattiest pastry in all of Europe.”  So, of course I like them. Instead of cake for Laura’s birthday, we decided to try to make them at home.

The first time I had a kouign amann during our year on Samish Island. The Bread Factory in Edison has them. I didn’t remember the name, just that they were very tasty. The pastry then made an appearance on the Great British Baking Show as one of the technical challenges.

This past summer we were back at the Bread Factory and once again they had kouign amanns, and this time I recognized the name. Once again, they were excellent.

Fast forward a couple of months…

I started searching for kouign amanns around town. It seems that none of the bakeries around here make them. I even put out a cry for help on Facebook. I was directed to Trader Joes’, who supposedly has them in the freezer section.

Alas, when I checked our local store they didn’t have them. I later read that they had been discontinued.

Last Christmas Glynda gave Laura a copy of the Great British Baking Show Cookbook. This edition has a recipe for kouign amanns, but all of the measurements are in weights rather than quantity or volume. For Laura’s birthday I had given her a kitchen scale. Now we could make our own.

To test our creation a control was necessary. One of my Facebook contacts said that Upcountry Provisions had kouign amanns. Laura’s birthday lunch was a trip up to Travelers Rest where we had a couple of wonderful sandwiches and picked up two of their kouign amanns to take back with us. On our way home from lunch we picked up the ingredients we lacked to complete the pastries.

First we made the dough, combining the flour, yeast, salt, and water. We used the dough hook in Laura’s mixer to combine the ingredients. (I say “we”, but Laura was doing all of the work. I was just taking photos.)

We shaped the dough into a ball, then covered it and let it rise for an hour, or “prove” as they say on GBB.

Now starts the long, tedious process of folding and resting. We took a half-pound of butter and shaped it into a square, then folded the dough on top of it. This was rolled out, then allowed to rise some more.

This process was repeated several times – fold into thirds, roll out, rest. In between folding sessions we rewatched the GBB episode with the kouign amanns, as well as the Master Class episode where Paul and Mary explain the proper way to make them.

On the last fold we measured out 100 grams of the caster sugar and sprinkled it over the rolled dough.

After the last resting/rising session Laura rolled out the dough, then cut it into squares using a pizza cutter. You could clearly see the layers starting to build in the dough.

The squares were pinched and placed in a greased muffin/cup cake pan. We sprinkled these with more caster sugar then let them rise a bit more.

As you can see from the photo above, some of our pastries were larger than others. Paul Hollywood would have penalized us for that. This would also create problems later in the baking process.

After the final rise we were supposed to bake the pastries in a 425º oven for 30 minutes. We set the timer for 15 minutes, and I’m glad we did. At 15 minutes the kouign amanns were already starting to turn dark. Laura covered them with foil to prevent burning, but the sugar still carmelized to a very dark color. Some were legitimately burnt. For future batches I think we’ll go with a lower temp and less time and watch them carefully.

They were still quite good. Maybe not as good as Bread Farm, but how did they stack up to our Upcountry Provisions control pastries?

I’m not sure what Upcountry Provisions is selling, but they are NOT kouign amanns. Theirs are more cake than pastry, with no layers at all. Instead of fine sugar they made a glaze of powdered sugar. There was also some sort of creme filling. Either that, or the dough wasn’t done to completion in the middle. It was good, but it wasn’t a kouign amann. Ours was better, even burned.

It was a fun birthday activity. Laura said she felt like she was doing chemistry in her kitchen, which she loved. We’ll definitely make these again, but we’ll have to wait until our waistlines recover. I’m not sure Laura is ready to claim the title of Queen of Kouign Amann, but she’s pretty darn close.

One thought on “The Queen of Kouign Amann”