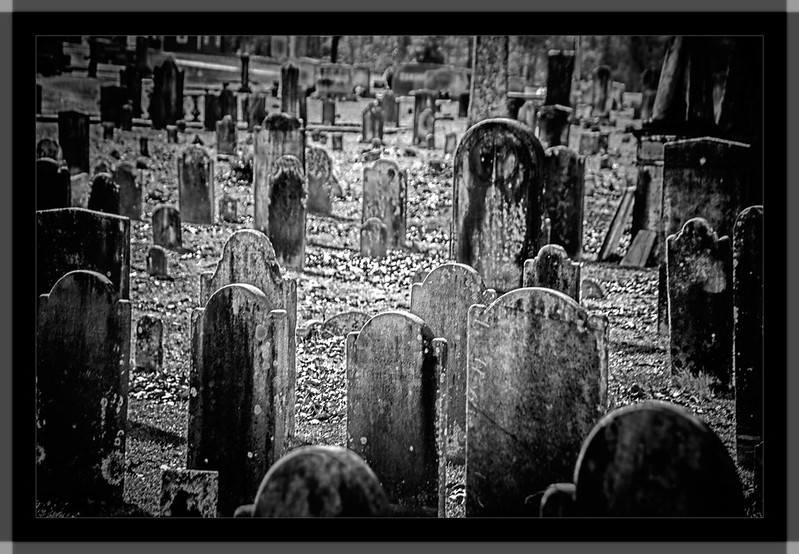 Humans are weird. At least in our western culture, they expect that a sixteen square foot plot of land will be set aside for them in perpetuity, to be held sacrosanct as a memorial of their existence. It seems that over the generations we would eventually run out of land for burials. Perhaps that’s one reason why cremation and other alternative burials are gaining popularity.

Even so, old cemeteries can reveal the history of an area. It’s a remembrance of the lives that came before, and often the only indicator of a lost community. And this is where things get sticky. As much as we may want “perpetual care” for our deceased friends and relatives, entropy tends to get in the way. Cemeteries become untended and lost.

While searching for ghost towns and doing genealogy research I’ve come across many of these lost cemeteries. Sometimes it’s the only remnant left of a community. These old burying grounds bear witness to the lives and activity that once filled this space.

Small family cemeteries dot the landscape, but unless those family plots have some significance to my genealogy research I tend to be more interested in church graveyards. It’s a better indicator of the overall community and history of the area.

Perhaps now is a good time to make some distinctions in terminology. The words “cemetery” and “graveyard” are often used interchangeably, but there is a difference. A cemetery is any place for burial, whether it’s a family cemetery, a church cemetery, or a private for-profit burial ground. A graveyard refers to hallowed ground – land, usually near and associated with a church, that has been consecrated by a religious organization for burial.

When the church associated with a graveyard ceases to exist the graveyard is left orphaned. There are so many of these that I decided to concentrate on Greenville County. Comparing data from GNIS, Find-a-Grave, and other resources I compiled a list of seventeen orphaned graveyards.

There are probably many more, but this was a manageable list. I mapped the locations of these, as closely as I could.

Some of these I’d already visited and photographed. Some were new to me. I decided to check out the ones I had not yet visited. My first plan was to write a single blog post about all of these, but I’ve since decided to break it up and do one every now and then as the mood strikes me.

During the course of my explorations I found that there were several explanations as to why graveyards are abandoned. The most common reason is that the congregation dies out and the church closes, leaving the cemetery behind. In some cases the church still exists but has moved, leaving behind a graveyard to be neglected. I found a couple of instances where the church stayed in the same place but changed hands. The new congregation wanted nothing to do with the old graveyard.

The conditions in which I found these graveyards also varied. Some were completely forgotten and overgrown. Some were still lovingly tended, though the congregation had moved on. Some had been rediscovered and were in the process of rehabilitation. A couple that I had on my list weren’t as orphaned as I might have thought.

I asked my brother Stephen about church graveyards. At the time he was pastor of Covenant Methodist Church in Greenville, and I asked why Covenant didn’t have one. He said that most newer churches don’t bother because they can be such a headache. There are issues of maintenance and legality and there are always disputes about who gets to be buried where. Any relatively new church just lets commercial cemeteries handle everything.

Having been involved with church work myself I certainly understand that point of view. However, does seem that we have lost something of the community with the consolidation to megachurches and massive city cemeteries. Oh well.

Speaking of Stephen, the first orphaned graveyard that I’ll cover actually has close ties with him. The parent church still exists. Stephen and Cynthia got married in that church and Cynthia’s father was pastor there at the time. The original cemetery, however, a few miles away and completely unknown to most of Greenville. Next post I’ll explore the Old Salem Methosidt [sic] Cemetery.