Last week while in Florida I thought I had stumbled on the reincarnation of Reverend Yuri. At least, it was his/her spiritual and oratorical successor. I was scanning the local radio stations when I came upon a program featuring Bishop Huriah. Bishop Huriah had the same lilt and use of Black vernacular. Instead of a simple thirty second ad, though, Huriah had a full fifteen minutes to spread his message. It didn’t differ much from Yuri’s – if you’re downtrodden, Bishop Huriah was there with his 1-800 number for you to call and receive his “special blessing.” 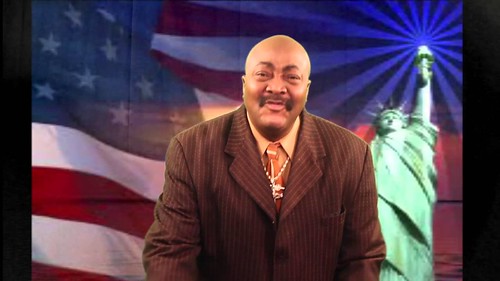 I was hooked. I tried to make sure I was around at 12:45 each day for the message broadcast on WJFP, 91.1 FM. I even managed to record two episodes in the short time I was there.

The shows were somewhat..strange, in their format. Bishop Huriah would make an introduction. Somewhere there would be a scripture reading. The scripture may or may not have anything to do with whatever was said. Sometimes there would be a testimonial to the monetary blessings received by one of Huriah’s devotees. The really odd thing was that each show was a mish-mash of recordings. Some of it sounded like studio-quality recordings, and some of it sounded like it was recorded on an old mini-cassette recorder going down the highway. The transitions between these segments could be jarring.

I figured it was time to get the background on Bishop Huriah. Who was he? Where did he come from? Turns out Huriah Boynton, aka “Big Hugh” Boynton, was born in Macon, Georgia. According to a memoir by Boynton entitled “The Trials & Tribulations of Huriah Boynton – Vol 1: Don’t Stop Dreaming and Believing in God,” Boynton was destined for great things from birth. A brief paragraph appears below: 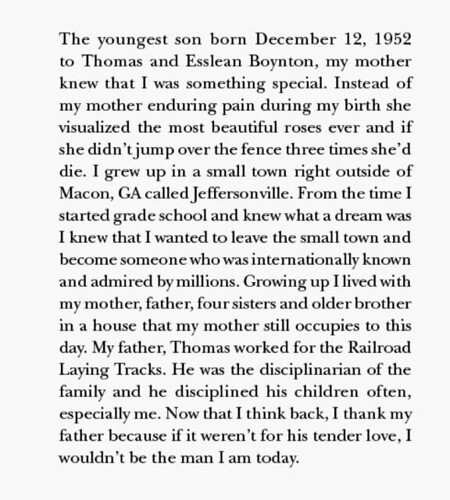 Boynton spent some time in Detroit, trying to make it as an R&B singer, using the name “Big Hugh.” There are several YouTube videos of him covering various Otis Redding songs. In the only one I found that actually shows him in the video, he’s only lip-synching the music, and poorly, at that. His 1-800 number, which is the same one he uses in his radio shows, is splashed across the video along with the message that he is available for bookings.

I have no idea when “Big Hugh” became “Bishop Huriah,” (I guess if I bought and read his book it would tell me.) At some point Gospel replaced R&B and the Bishop started his ministry. Here’s another video of Boynton, this time singing Gospel.

I don’t know if the shows are broadcast anywhere other than the Treasure Coast. Boynton mentions Fort Pierce, Jupiter, St. Lucie and the nearby towns frequently in the shows, but then says he’s coming to you from McDonough, Georgia. Given the piecemeal nature of the editing, it’s possible that he’s in a limited number of markets, and does a custom intro for each market.

I never worked up the nerve to call the 1-800 number to see what the “special blessing” might entail. In all the shows I heard it involves some type of monetary return. There’s also mention of working against Satan, Voodoo, witches, and root doctors. I just wonder what sort of donation Boynton requests for said “special blessing.”

Boynton talks in superlatives. He wants you to “hit, and hit big.” He also proclaims that he was “once the king of all the prophets. Now I’m the ONLY one!”

Those are some mighty big claims. The honorific “Bishop” just fits into that over-the-top phraseology. But, just how does one become a “Bishop?” I think most of it is self-proclamation. I’ve seen multiple honorifics used in my travels across the south, from Bishop to Apostle to Prophet(ess). I’ve said before that it often seems that the smaller the congregation, the more exalted the honorific for the minister. (One possible exemption being the World Redemption Outreach Center megachurch here in Greenville, and “Apostle” Ron Carpenter, Jr.)

Again, how does one become a bishop, a prophet, or whatever? According to “Master Prophet” Noel, it’s through a mentoring process. His website offers ordination for prophet, bishop, and/or apostle. You can even join his School of Prophets. For a mere $300 you get an MP3 player, headphones, and enough audio file ramblings by the author to occupy five weeks of time. The diploma and ordination is included with the package, so you really don’t even need to listen to the files. If you just want the papers, that will set you back only $89. (Prophet Noel has several videos on YouTube “exposing” the error of his competitors, including Bishop Huriah.) 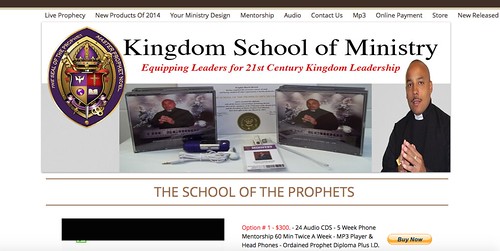 But, back to Bishop Huriah…

What first drew me to the show was the lilting catchphrases and rhythm of Boynton’s voice. I recorded one of the shows and broke it into short segments. I then created several Dub Step variation loops using the Korg iKaossilator app on my iPhone. I mixed all of these in Garage Band on my Mac into a single file and uploaded it to SoundCloud. Here’s the result:

So, a lilting vernacular style, over-the-top claims, and an R&B voice…what’s not to like as far as entertainment? I sometimes wonder how seriously the good Bishop takes himself. In all of the videos he’s smiling, and he seems to have fun with it, and I think that’s part of the appeal.

NOTE: I’ve had several members of a Boynton family make comments and share history on this site recently as part of post on the ACE Basin. Huriah Boynton isn’t part of that family, as far as I know, and the same last name is just a coincidence.

5 thoughts on “The New Modern Prophets”