Fast forward about a hundred years…

The plight of South Carolinians had not improved. Floods threatened the Congaree-Santee basin on a regular basis, and malaria was prevalent. The whole area was impoverished, and illiteracy was common. As early as 1914 it was reported that the Santee-Cooper project was being planned. These early discussions of the Santee Cooper project focused on the navigation aspects – the creation of a new canal linking the two rivers. Hydroelectric power was a secondary consideration. The lakes themselves weren’t really considered.

Bills were introduced, but the project lay dormant for another 20 years. According to a retrospective in The State newspaper…

In 1934, state legislation established the S.C. Public Service Authority to construct and operate the Santee Cooper Hydroelectric and Navigation Project and improve “health, welfare and material prosperity.” The lakes and the dams would do just that by providing electricity.

In 1935, a guaranteed federal loan and grant promised a beginning. But court fights with private utility companies delayed the start of work until April 1939.

Soon, blacks and whites, pulled from the relief rolls of every county in the state, were at work. The Works Progress Administration gave 9,672 South Carolinians jobs at the project’s peak, according to the 1944 “Picture Progress Story of the Santee Cooper.” In all, 12,500 workers were employed.

WPA Workers swarmed over the Moultrie basin cutting trees, clearing stumps, and completely clearing the area. Several photographers were instrumental in documenting the work. First up is Harry T. Poe, Senior Engineer for the Santee-Cooper Navigation and Hydro-Electric Project. Poe kept a scrapbook of the project, which has been digitized and is now part of an online exhibit created by Clemson University. The images shows the planning and early construction stages of the Pinopolis Dam and Lock, as well as images of the area from before work began. Unfortunately, the website is not very well organized and is not searchable. 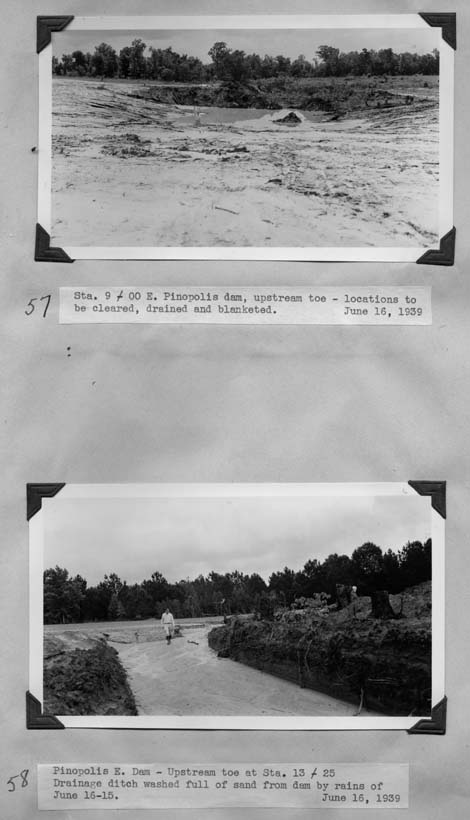 Jack Delano was a WPA photographer who also documented the construction. Many of his photographs of the area can be seen at the Library of Congress’s American Memory website.

Samuel Lord Hyde was placed on the team tasked with documenting cemeteries in the area to be flooded. His photographs can be found on the Lowcountry Digital Library website.

Another photographer named in The State article was C. R. “Dick” Banks. From June 1940 through December 1941, Banks was a WPA photographer, recording the land clearing as well as the plantation houses doomed by the project. He now lives in St. Matthews, SC.

According to the The State article…

While 6,000 graves were moved, many were left to the waters. A 1939 architectural report cited 22 endangered plantation houses, mostly in Berkeley County, mostly demolished, a few moved before lake waters rose. Banks remembers an owner staying in a corner of an historic home as it was dismantled; he remembers another killing himself.

The report was the Waterman Report, and provides a contemporary history and description of the area. The individual described by Banks was one Joseph Simons. Simons lived at Pond Bluff Plantation, which had originally been the home of Francis Marion. According to Douglas Bostick’s book, Sunken Plantations: The Santee Cooper Project, Marion’s original home was long gone, but Simons had built a new home at Pond Bluff. Simons refused to sell to Santee Cooper, which then invoked eminent domain to seize the property. Simons exhausted his legal options, and in 1939 stood on the porch of his home, pulled a gun, and shot himself.

Simons was buried at Rocks Cemetery, one of our paddling destinations for last Saturday. His headstone states that he was killed with a self-inflicted gunshot wound. We looked for his grave, but unfortunately I couldn’t remember Simons’ name when we were out paddling, and there was no signal to look up the information on a smart phone. (CORRECTION/UPDATE: Simons headstone DOES NOTE indicate a cause of death.)

With rumblings in Europe and the threat of war, construction was ramped up. Lake Moultrie was cleared of stumps, graves, plantations, and everything. Lake Marion was done a bit more haphazardly. According to one worker, Bill Fletcher…

So, cypress trees can be found right out in the lake. Large tracts such as Rimini and Sparkleberry Swamps are still thick with trees. In these places stumps can be seen below the waterline, and can be a hazard for boaters. At lower levels, such as was seen in the shot below from a paddling trip Alan and I took to Low Falls Landing in 2011, the stumps are clearly visible. …and so we return to Ferguson…

Even though the town was long abandoned prior to flooding of the lakes, it was spared the clearing because of the rush to finish the power plants. I was able to find some early topography and soil survey maps from the SC Memory collection that show Ferguson prior to the waters’ rise. In the image below, I took the 1942 topo map and overlaid it onto Google Earth. This shows the current Ferguson Island, and where the buildings were originally. I wish I had done this before we took our paddling trip. We might have explored the area a bit more.

And so the waters rose and the lakes formed. In addition to electricity, the Santee Cooper Project did create the long-sought water route from Columbia to Charleston. A diversion canal links the two lakes, while the Santee River flows eastward from the dam at Lake Marion and bypasses Lake Moultrie. At the Pinopolis Dam on Lake Moultrie, the Pinopolis lock lowers boats 75 feet down to the Tailrace Canal, which then connects to the Cooper River. At the time of its completion, the lock was the largest single-stage lock in the world. The New Deal project was one of the largest WPA projects of that era, and one of the largest land-clearing endeavors undertaken. However, the controversy continues. As late as the 2000’s a proposal was submitted by Congressman Jim Clyburn to build a bridge across upper Lake Marion from Lone Star, now a ghost town, to Rimini, a wide spot in the road on the other side of the lakes. Clyburn argued that it would bring economic development to an impoverished area, while others derided the plan as a “bridge to nowhere.” In 2007 the S.C. Department of Health and Environmental Control denied the necessary permits for the Department of Transportation to begin work on the bridge. However, the issue isn’t dead, and may still happen.

The series documenting the history of the Santee Cooper area in The State newspaper was actually a multi-part series examining the controversy. The entire series is well worth the read. You can follow the links in the article above, or read the entire article below:

Growing up, the two lakes fascinated me. I was a true map geek as a child, and the incredibly long, straight dam on Lake Marion caught my attention on South Carolina road maps. However, those lakes might as well have been as far away as California. Just recently, I have been able to paddle several sections of the lake. In addition to this most recent trip, I have paddled through the Pinopolis Lock from Lake Moultrie to the Tailrace Canal… …I have paddled Sparkleberry Swamp on multiple occasions… And I’ve circumnavigated Persanti Island on the north end of Lake Marion. I must say that I prefer Lake Marion to Moultrie because the trees, stumps, and old buildings were left. I’m glad the government ran out of time. It has a wilder feel to it, and there is so much more to see. Despite the adult entertainment dives in Santee, the setting really is spectacular, and it’s quickly becoming one of my favorite paddling venues.

That opinion is not universally shared, though. When John Lane took his Paddle to the Sea, he completely skipped Lake Marion. This is how Lane saw it…

For me, Lake Marion was an engineering monstrosity and it held no attraction…. A man-made lake is a mere placeholder, a clot in the natural system that over time will clear itself. An impoundment is simply waiting for centuries and gravity to release the flowing water from our utility or recreational needs and return it to the natural river it once was. On the Santee, time will prove more powerful that politics and engineering.

Some paddlers have a much different view. Several years ago I served as a mapping consultant for an SCETV RiverVenture project. Nature photographer Richard Bernabe was taking a similar paddling trip. While John Lane avoided Lake Marion and stuck to the natural route of the Santee River, Bernabe paddled the lake, then went through the diversion canals, Pinopolis Lock, and Tailrace Canal down to Charleston. But, then again, Bernabe’s trip was funded in part by the Santee Cooper Project.

My opinion? I think I would have preferred a wild Santee River. However, this is what we have now. I am willing to enjoy paddling the flooded forests of the lake. The area had already been logged by Ferguson and Beidler, so much of the virgin forests were gone even before the lakes were built. Still there is much wildlife and beauty to be found, and I would not like to see anything else disrupt that view.

22 thoughts on “The Ghost Towns of Lake Marion, Part 3 – The Water Rises”