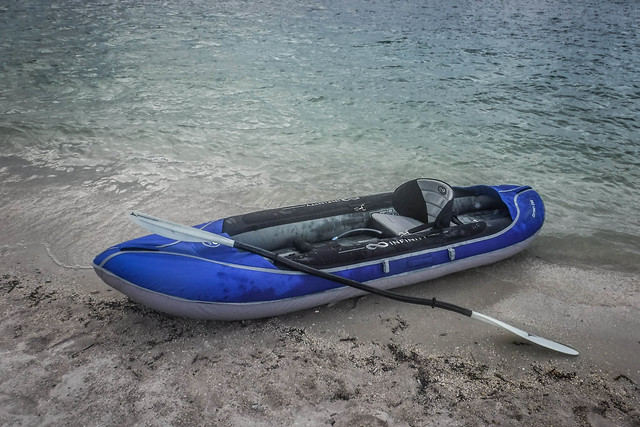 Once upon a time Confluence Watersports in Easley would have a special sale for “friends and family.” Employees and even the general public could come purchase kayaks that were factory seconds, demo boats, discontinued products, and other items that couldn’t be put out for regular retail sale. The incredible prices are how my brothers and nephew have built up our fleet of kayaks.

Of course, you had to be careful. One of the boats we got had a warped hull, and had a distinct pull to the left. My favorite Pungo had all of the seat webbing sliced, and I had to replace it. One of Chip’s boats lacked covers for the storage hatches. For the prices we got these boats, we could cope.

The problem was that people started purchasing LOTS of kayaks at once and reselling them. This was undermining local merchants like Sunrift Adventures and Grady Outdoors. The sales were closed to the public. In order to attend the sale you had to have a ticket, and you were limited to two boats.

The last sale I attended was a couple of years ago. Chip was able to get a couple of tickets through connections he had, so we headed over. I bought two touring boats for my older brothers, since I already had enough kayaks. As we were getting ready to check out we spotted a collection of gear in a corner. There was a stack of inflatable kayaks that had…problems. The valves had not passed quality control, so there was no guarantee that they would hold air. The folks running the sale pointed out the best of the lot, and sold it to us for $10. We figured the pump that came with it was worth at least that much.

And so, the kayak sat in my basement for the past two years. I kept meaning to try to pump it up and see if it would hold air, but since it was hidden away in the basement, I also kept forgetting about it. Truth be told, I wasn’t sure how I might use it.

Several weeks ago Laura and I decided to redo the basement with new carpeting, etc. As we were cleaning up, we came across the kayak. I decided to pump it up and see if it would work. To my surprise, it seemed to work beautifully.

The kayak is an Odyssey 295. It’s a 9′ tandem, and has gotten good reviews. Unfortunately, it’s been discontinued by the manufacturer, so if something was wrong, getting replacement parts would be a bear.

We decided to take it to Florida to try out. The kayak folds up into its own backpack, so it doesn’t take up as much space. We even thought we might be able to take it to the Keys with us when we head down there.

Time for the maiden voyage arrived. We headed over to the Fort Pierce Inlet Park so that we could launch from a sandy beach. I spread out the gear and started pumping while Laura documented the process. We had a few curious onlookers. 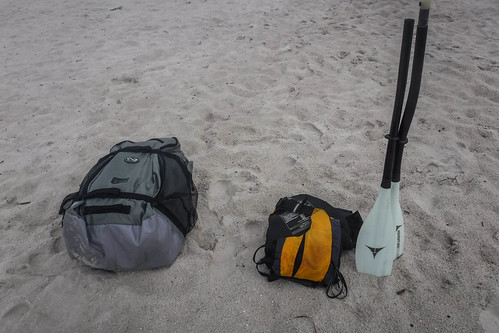 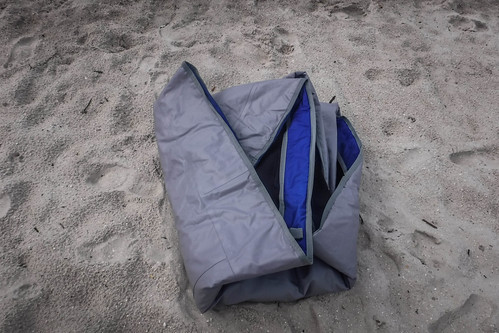 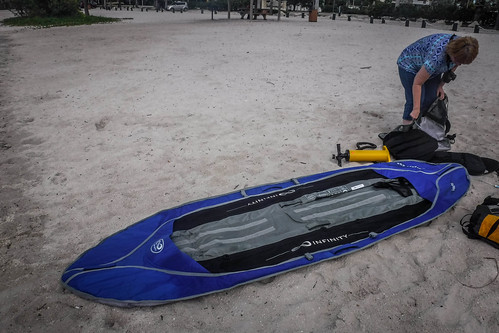 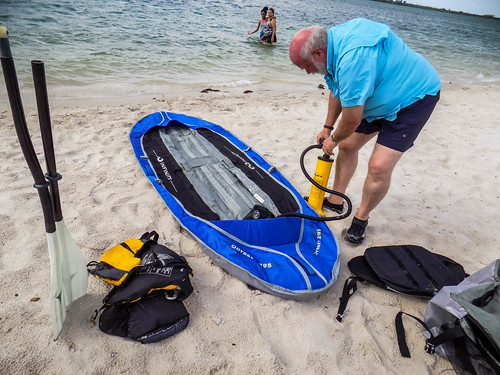 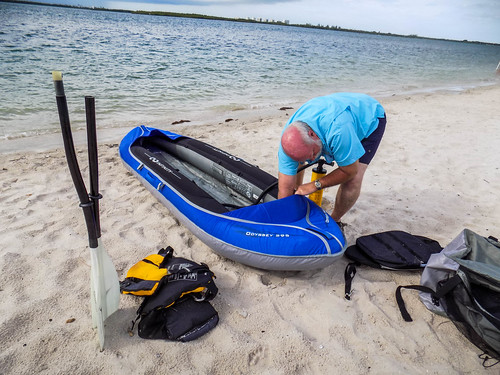 Once I got the boat unfolded it took right under five minutes to inflate the boat. We timed it. As a rain storm threatened to the north, I set out. 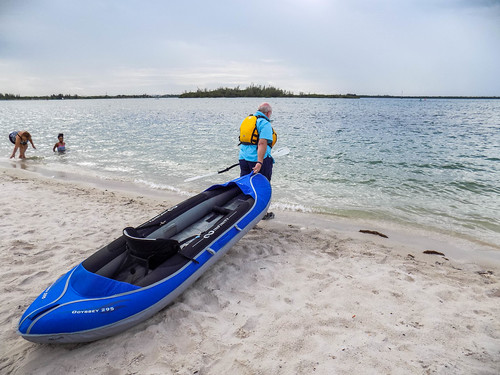 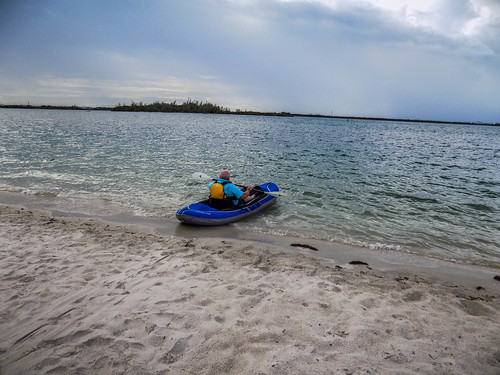 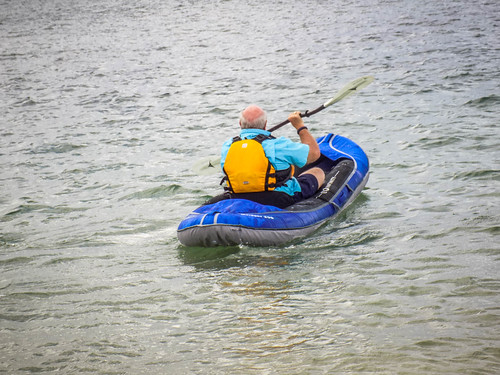 Got to say, this isn’t the best boat I’ve ever paddled. I don’t think it’s even the best inflatable I’ve ever paddled. It moved quicker than I expected, but had a tendency to fold a bit every time it hit a wave. I imagine it would do much better in calm waters. It also didn’t track very straight. I could spin it around on a dime. The boat was supposed to come with a plastic skeg, but that seemed to be missing.

The worst problem was the seat. I had it configured for solo paddling, but it was probably the most uncomfortable thing I’d ever paddled. I brought it back in and readjusted the seat and inflated the seat bottom, and that helped, but it was still not as comfortable as I might have liked. 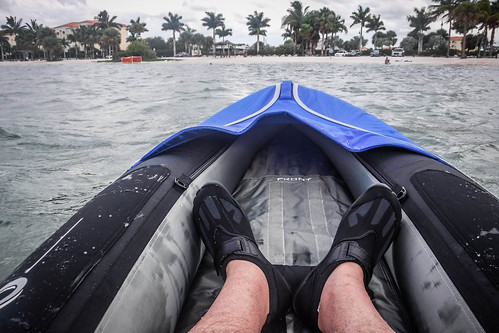 More troubling though, was the fact that the starboard thwart was leaking slightly. That’s the chamber that had a faulty valve. The bottom chamber and port thwart were fine. While this boat might be great for floating the Edisto River, I wouldn’t want to spend all day on it without carrying a pump along. 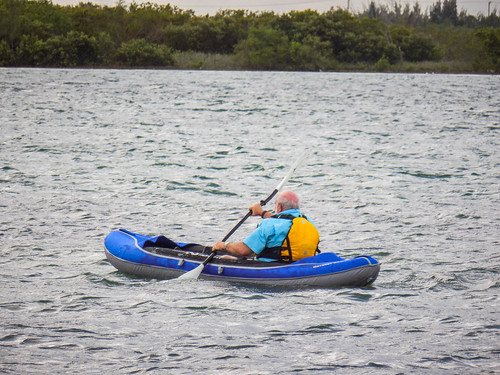 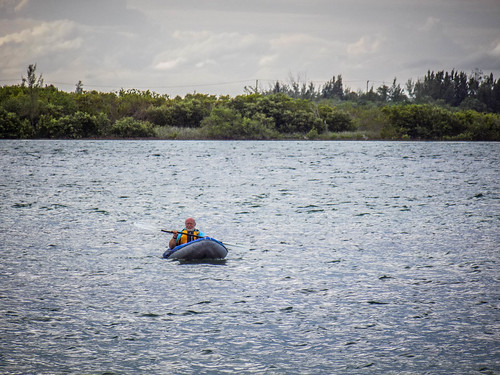 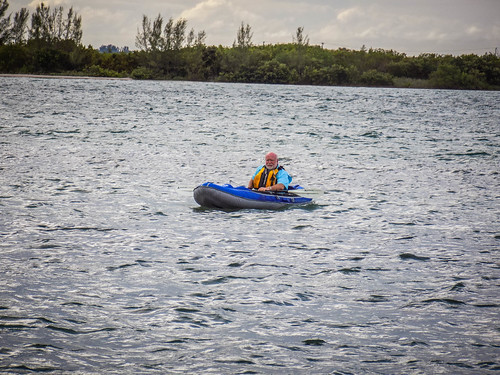 With rain threatening, I decided I’d had enough paddling for this evening. I pulled the boat out, deflated it, and folded it back into its backpack. The process was actually quite quick. 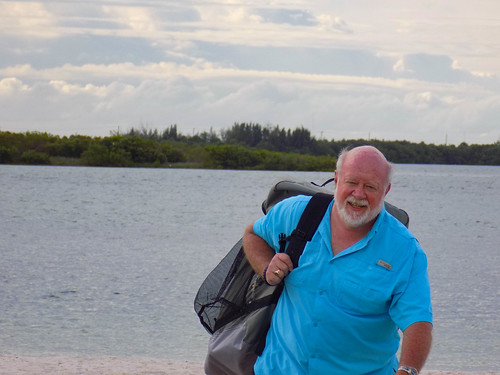 Conclusion? I still think of this as more of a toy than a serious boat. It’s fine for paddling along a sheltered cove, but I can’t imagine taking it on a long trip, even if it did hold air better. The seat is just too uncomfortable. I also couldn’t imagine using it as a tandem.

Even so, we might still take it to the Keys and paddle around a bit. It would be easier than keeping a 12′ Pungo in our hotel room. For the price, it’s certainly cheaper than renting a boat, or even buying a float.