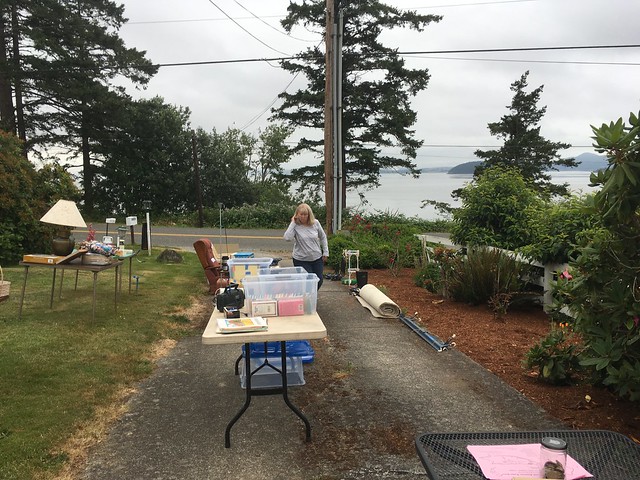 Yep, I’m behind on blog posts. We’ve taken some cool trips lately and those photos have been posted to Flickr, but it seems that every time I sit down to write up a post something comes up. I’ve got at least four posts in the hopper right now.

The biggest distraction has been our preparations for the big Samish Island Yard Sale, held this past Saturday. Our participation was relatively small, but it still took a lot of time and effort.

Last year the Samish Island Yard Sale was held on the day of Mrs. Wright’s funeral. Many of the island residents who knew her couldn’t come to the service because they were involve with the sale. They take this seriously out here. 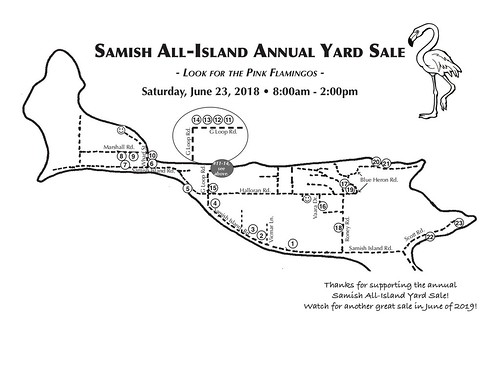 For this year we knew we had lots of potential items, but figuring out what would work for the sale was the challenge. There are some very nice items in the estate. We don’t necessarily want to keep (or have room for) all of it. The trick was to sort through and see what was better for the yard sale, and what might get more money in an estate sale to be held later. For the yard sale we opted for household items – some older furniture, office supplies, artwork, a few tools, books, and lots and lots of baskets.

We collected things from the house, workshop, and shed and staged them under the carport. There we evaluated, cleaned, then priced the items. Laura had been reading “How to run a yard sale” articles online, so I let her take the lead with the project. When we looked at everything we’d gathered and priced we were a bit…disappointed. We didn’t have that much to offer. As a single yard sale our meager merchandise wouldn’t have gotten much attention, but as part of a larger community sale it might work. 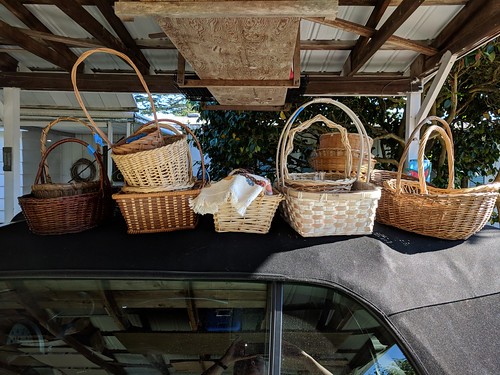 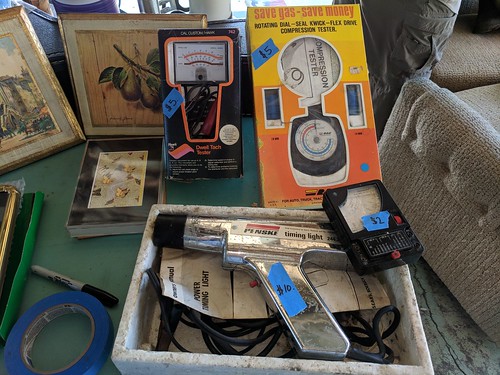 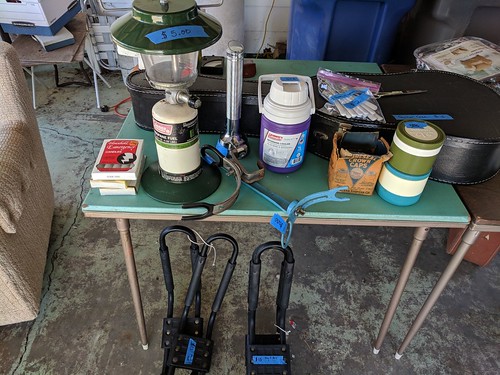 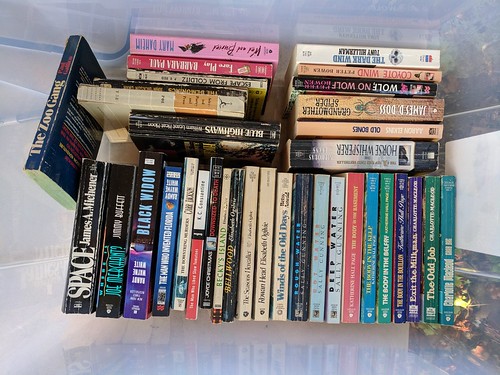 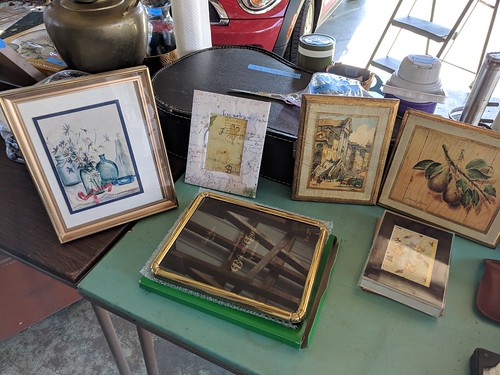 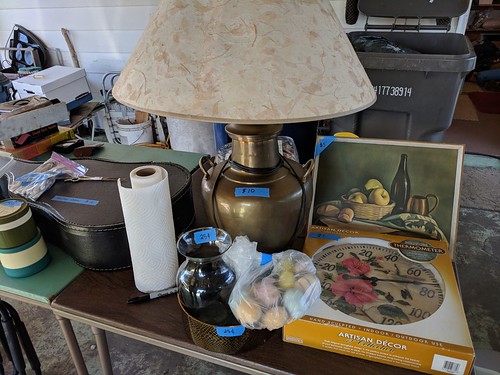 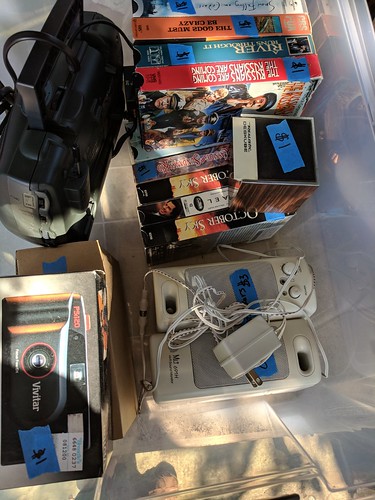 The kick-off for the big event was held at our next door neighbor’s house. They have a wonderful patio on the roof of their workshop, and it was here that we gathered for instructions, maps, and wine and snacks. Joan had asked that I bring my guitar for entertainment. Folks stopped by to pick up their info and get a pink flamingo, which signified that the house was participating in the sale. 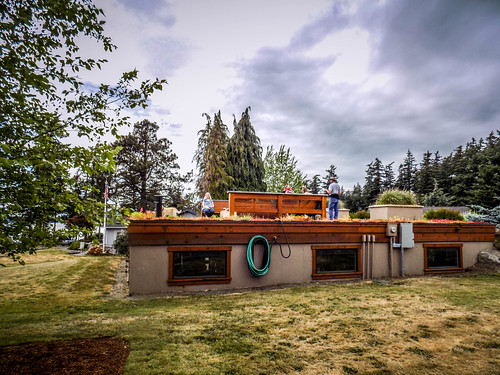 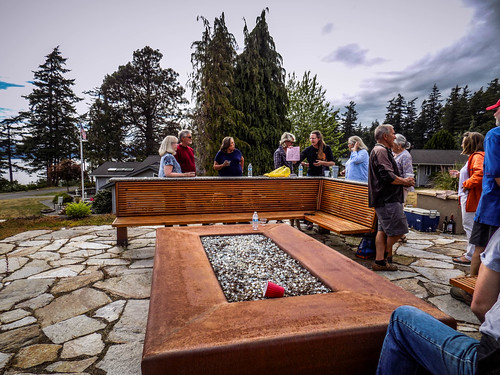 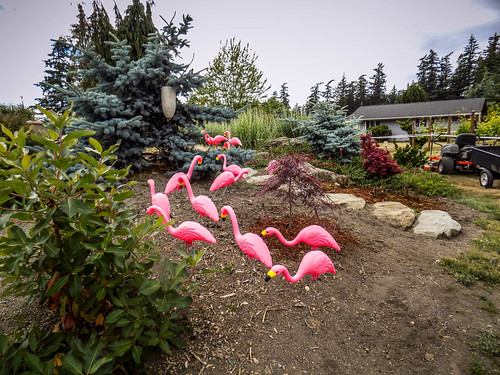 The next morning we were up early getting things ready. The clouds were heavy and an occasional mist fell. We were a bit worried about the weather as the guys from Covenant Garage Door Service were supposed to drop by earlier that day. 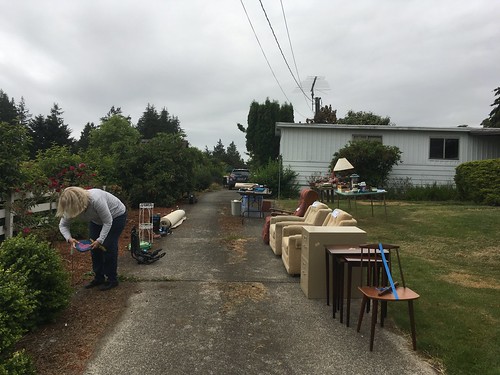 That didn’t stop folks from showing up, though. The sale was scheduled for 8:00 and by 7:15 we already had people stopping by. They continued to pour in, even as we tried to finish setting up.

Soon things fell into a rhythm. The weather cleared and the customers came by. Some had never been on the island and paused in our front yard to take photos of the view. Some looked and left and some actually bought stuff. While folks shopped and when I wasn’t needed I played my guitar. I had to remind myself that you don’t take it personally if someone leaves without buying anything.

Having run garage sales and church bazaars back in South Carolina I knew that some shoppers could be contentious. There was none of that here. Everyone we encountered was friendly. We met some more of our island neighbors as well as some folks from off-island. I kept a tally throughout the day of the number of folks visiting vs the number of folks actually making a purchase. We had 185 people stop by. Of that number, 44 actually bought something, even if it was just $0.25 for a paperback.

It amazed me which items sold the fastest. The stationary and books went quickly. I sold my old kayak racks and a spare guitar case before 8:00 am. Some people would buy something for a quarter or 50 cents just to say that they had made a purchase.

We cleared about $130 for the day, but that wasn’t the real point of the event. The point of the sale was to get rid of some things and get them into the hands of folks that could use it. Some of the items that didn’t sell, like a bunch of purses, was donated to someone to take to a women’s shelter. The items that we didn’t sell were left in our front yard with a sign that said “Free.” As of this writing it was all gone except for two old chairs and a broken lamp.

It was a tiring, but good experience, and I’m glad we were able to reduce the amount of stuff at the house. My thanks to Joan and Bill Tezak and Amy and Scott Colvin for organizing the event. 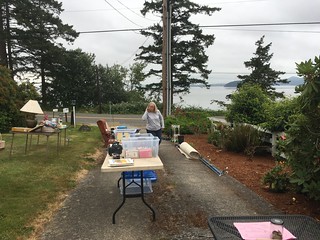