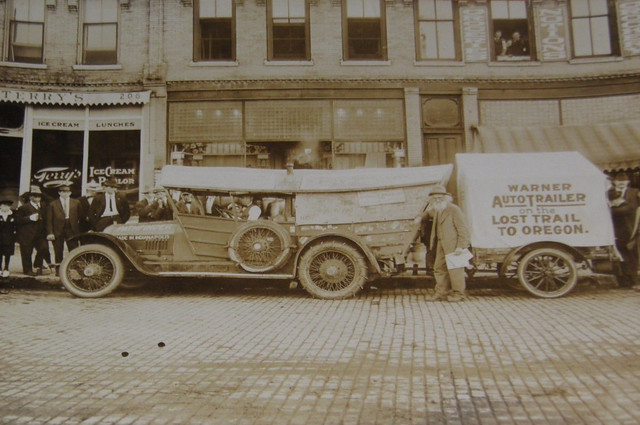 It was early 20th Century and cars were just coming into their own. However, the roads weren’t keeping up. Most were still dirt tracks at the best of times, and terrible mud pits at others. A cross-country trek was an adventure, and only for those with the means to obtain and maintain an automobile. Greater buy-in was needed from the general public so that bond initiatives and legislation could be passed. Thus was born the age of the Pathfinders, adventurous souls who sought out the best routes, laid out the paths for early highway systems, and brought to the public awareness of the need for good roads.

The Pathfinders had two roles. The first was to bring about awareness of the need for good roads. To this end, several long-distance treks were planned. Typically, these were sponsored by local or national automobile clubs such as American Automobile Association, or AAA. 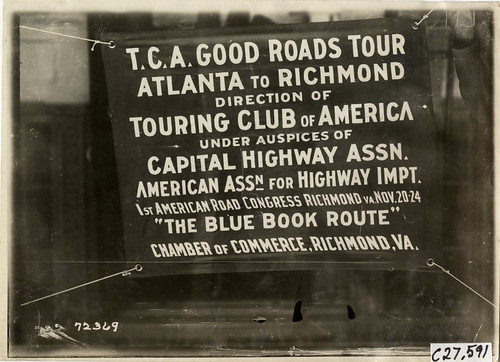 Many of these tours took on the aspect of competition. Emerging automobile companies were keen to show off their new vehicles, and drivers wanted to show of their skills. In 1902 the AAA began a series of tours highlighting the condition of US roads. In 1905 industrialist and automobile enthusiast Charles Jasper Glidden began offering a $2000 prize to the first vehicle that completed the tour, along with the “Glidden Trophy.” The tours not only highlighted the need for good roads, but also showed off the reliability of different vehicles. Many ads accompanied announcements for the tours. 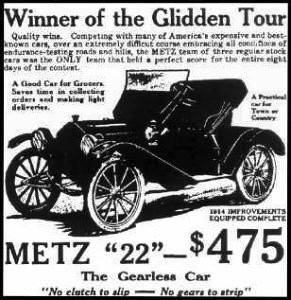 The races became known as the “Glidden Tours,” and were run annually. In 1913, “it was felt the the purposes which had given rise to its birth had been fulfilled, and the activity ended,” according to a history on the AAA website (PDF). In addition, the Indianapolis 500 had begun in 1911, and had stolen some of the Glidden Tours’ thunder as “the most grueling test for automobiles.”

One of the most outrageous contests during this time was the 1908 New York to Paris Race. The race began in Times Square on February 12. Six cars entered the race, representing four nations. The race was grueling, traveling across countries that had even less infrastructure and “good roads” than the United States. It lasted 169 days, and only three of the vehicles were able to complete it. 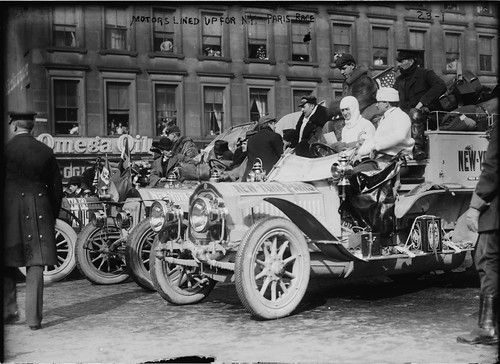 The New York to Paris Race was memorialized in two later pieces of popular culture. Blake Edward’s 1965 movie comedy The Great Race starring Jack Lemmon, Natalie Wood, and Tony Curtis was loosely based on the 1908 race. In 1968 Hanna-Barbera produced the Wacky Races cartoon, also loosely based on both the movie and the actual race. The cartoon featured such icons as Dick Dastardly an Penelope Pitstop.

A much less extensive tour, and one that came closer to our home was the 1909 New York to Atlanta Good Roads Tour. The tour started from Herald Square on October 25th, and the convoy consisted of sixty-one cars. In addition to automotive clubs, the cars were sponsored by automobile manufacturers, as well as the towns through which the tour would pass. Major sponsors were the New York Herald and Atlanta Journal. 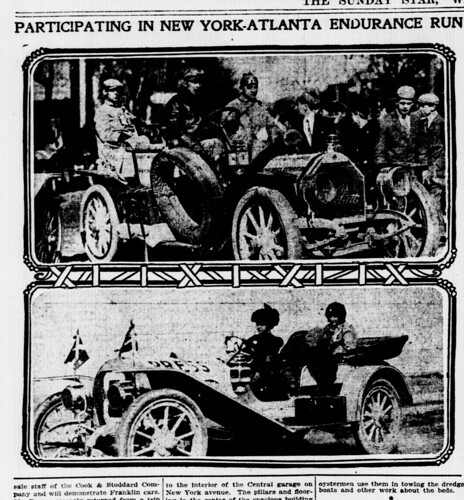 Since the route would take the tour through South Carolina, there was much interest among the state’s newspapers. The Newberry Herald and News featured this story on October 29:

New York, Oct. 25—With the cheers of a crowd of enthusiastic spectators ringing in their ears, the sixty-one entrants in the New York-Herald-Atlanta Journal good roads tour rolled out of Herald Square today on the first leg to their ten days’ trip to Atlanta. The start scheduled for a quarter to ten o’clock was made on the minute.

Fred Wagner, of the Herald office who was official started at some of the most prominent race mets in the country, fired the gun just as the last of the line of escort cars reached Herald Square from Columbus circle, which was the assembling point or the honorary escorts.

Long before the hour set for the beginning of the tour the sidewalks around the Herald building were jammed with a great throng of curious and interested persons eager to see the cars set off in the most novel tour ever attempted in the instance of good roads for automobiles.

Altogether there were sixty-one cars entered in the run, and with the seven official cars and the seventy lined up in the escort squadron, the line as it left the Herald building was an imposing one.

Mrs. John Newton Cameo, and Miss Mildred B. Schwabach, in a loco mobile, received a great send off as they wheeled their cars into line behind the escort squadron. Although the official and the referee, non-contesting, both of these women will remain with the squad throughout the entire trip to Atlanta. They are the only women drivers who will make the entire trip.

At the Battery the escorts bade farewell to the contesting cars, which were ferried across on Staten Island. Once off the ferry, the speedometers were set at zero and with the aid of the official route book and the large yellow and black signs that have been placed along the entire route to Atlanta, the tourists began their first day’s run in earnest.

The 1909 trip was well-documented photographically. The Detroit Public Library has an extensive collection of photographs from that trip. Here is a view of the cars waiting for the Staten Island Ferry: 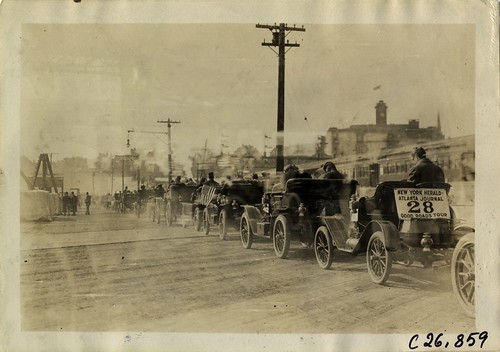 One of the reasons this particular tour garnered so much interest was that it featured celebrity drivers. None other than baseball legend Ty Cobb would be driving in the 1909 tour. Here he is seen as the driver with a passenger, followed by another view of the Chalmers-Detroit automobile he drove on the tour: 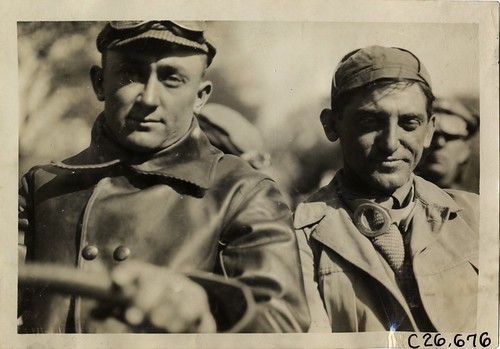 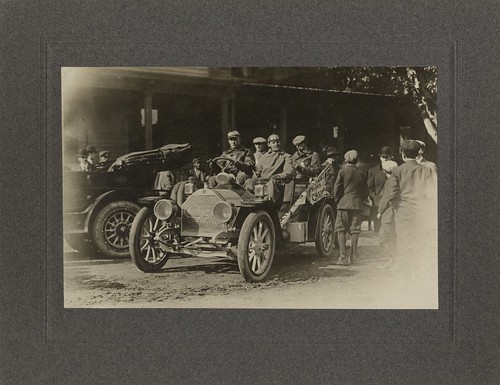 With Cobb in the driver’s seat the tour gained national attention. The Washington D. C. Evening Star had extensive coverage of the tour. It had this to say about Cobb’s participation:

Cyrus Cobb, an idol of the base ball world, is driving a car in the good roads tour from New York to Atlanta, which started from New York Monday morning, October 25. That Cobb is one of the star attractions of the tour cannot be doubted. He received a tremendous ovation in New York city at the start of the tour. Cobb is a southern boy, and, in fact, he represents his native town of Royston, Ga., in this tour. The board of trade of Royston wired to Cobb in Detroit, at the close of the world’s series, asking him to drive a car as its representative, and he finally completed arrangements to do so.

Cobb is driving a car which is scarcely less known than himself. He is driving the celebrated Chalmers-Detroit “30,” which as come to be known all of the country as “Old Reliable,” because of the many strenuous journeys it has undertaken and successfully completed. This car was driven last summer and fall 208 miles a day for 100 consecutive days, a total distance of 20,800 miles.

The tour roughly followed the route of the later Bankhead Highway. When the automobiles reached towns along the way crowds turned out to see Cobb, as well as the novelty of an automobile tour. 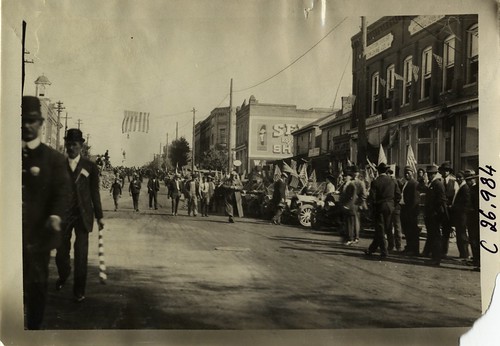 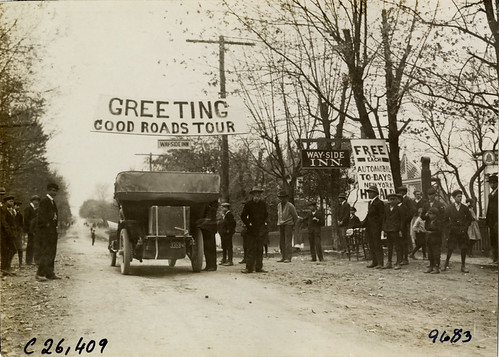 In South Carolina it passed through Gaffney, Spartanburg, Greenville, and Anderson. When it reached Gaffney a banner proclaimed, “Gaffney wishes you good luck, come again and stay longer, altogether for good roads.” 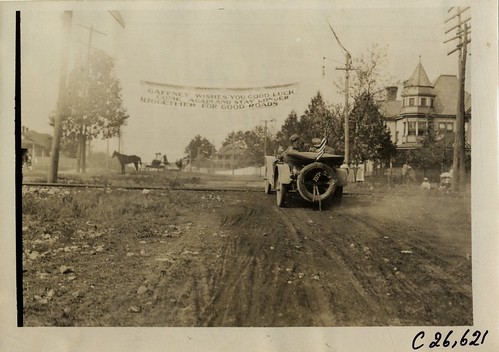 Here’s a view from Greenville. Notice the dirt roads. 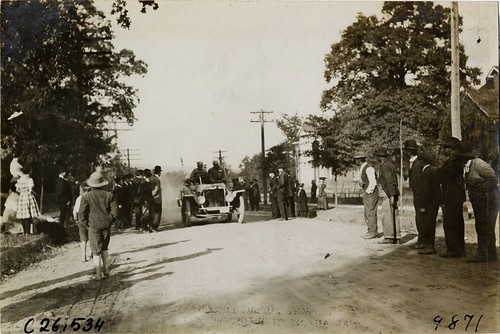 In Anderson there were more banners. On the back of this first image you can see the word ALCO, from another sponsor. The second image is supposedly from Anderson, but I don’t recognize the location. The third is another banner heading out of town. Again, notice that most of these were dirt roads 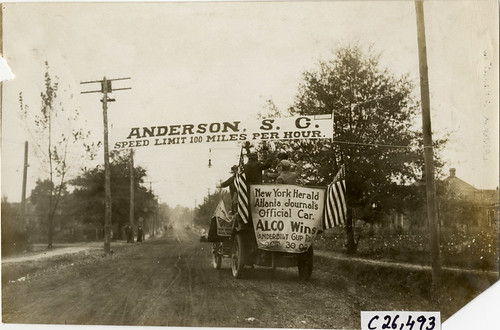 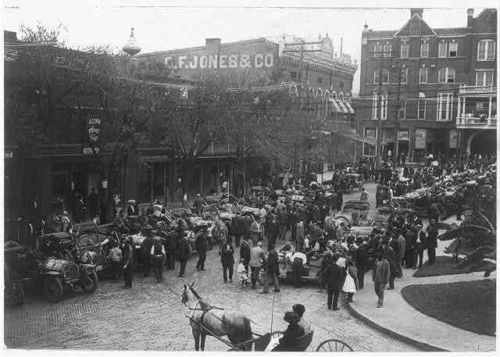 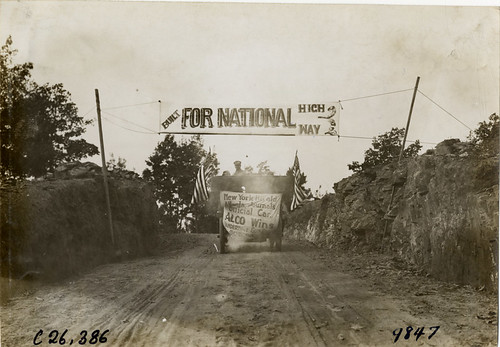 Since Ty Cobb was in the group, the tour was routed through his home town of Royston, Georgia. 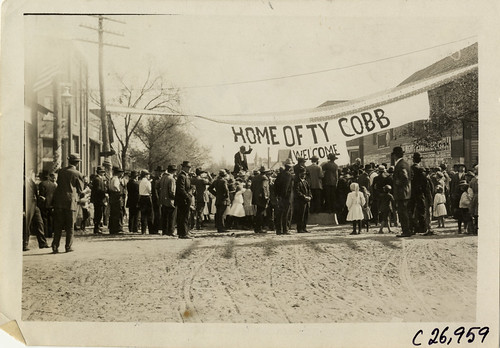 The group eventually reached Atlanta. The Los Angeles Herald states that the car that won the “principal trophy” of the tour was a 12-horsepower Maxwell. The article doesn’t mention the driver’s name until the very end of the article, showing that the model of car was as, if not more important than the driver.

Remarkable Climb of Maxwell Auto – Twelve-Horse Power Car Climbs to Where No Conveyance Had Ever Been After Perfect Score in Good Roads Tour.

What is regarded as the most remarkable hill-climbing feat ever accomplished by an automobile was the run up Stone mountain near Atlanta, Ga., on November 11. The car with which this seemingly impossible feat was accomplished was a twelve horse power Maxwell runabout, the same which only a few days previous had won the principal trophy in the New York-Atlanta good roads tour, and completed the Savannah-Atlanta endurance run with a perfect road score….

…The sturdy little Maxwell scaled the mountain entirely under its own power without any special preparations….

C. W. Kelsey, the originator of the run, left the machine on the summit, where more than 500 people viewed it during the next day.

I noticed a couple of things in this article. First, I think there’s a bit of hyperbole going on by using the term “most remarkable” to describe Stone Mountain. Surely there were more challenging mountain climbs on the Glidden tours out west. Secondly, they refer to the route from Savannah to Atlanta as an “endurance run.” Now it can be done in just a couple of hours.

After a brief time for recovery, the route was reversed, and 57 of the automobiles returned to New York. This was referred to as the 1910 Atlanta to New York Good Roads Tour (obviously.) Upon their return to “Gotham,” the Keowee Courier reported on the comments of then Mayor Gaynor of New York:

The mayor commented that ten years ago such a tour would hardly have been contemplated, while today Hamilton’s airship had sailed from New Your to Philadelphia. Such progress in another ten years, he said, would wipe out sectionalism entirely and there would be no North, South, East or West.

Other tours came through the state, including a 1911 Glidden Tour. This tour originated in New York and ended Jacksonville. 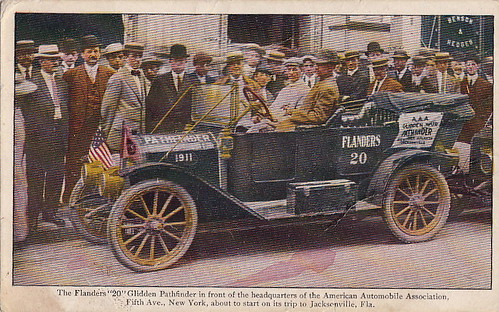 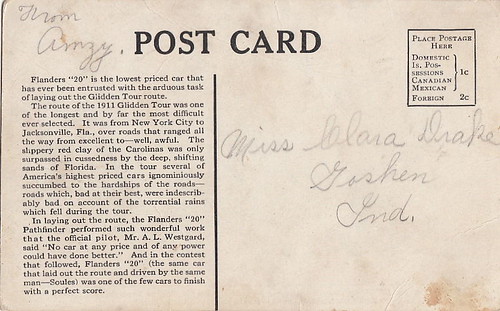 Here are images from first Spartanburg, then Anderson from the Detroit Library Collection: 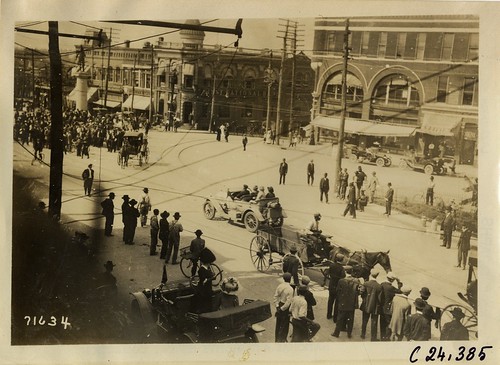 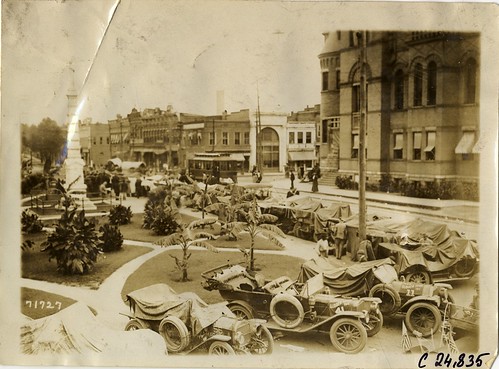 In the next post we’ll look at the second role of the Pathfinders – establishing routes and developing maps. 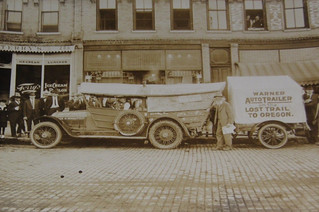 3 thoughts on “Pathfinders and Map Makers – Part One”