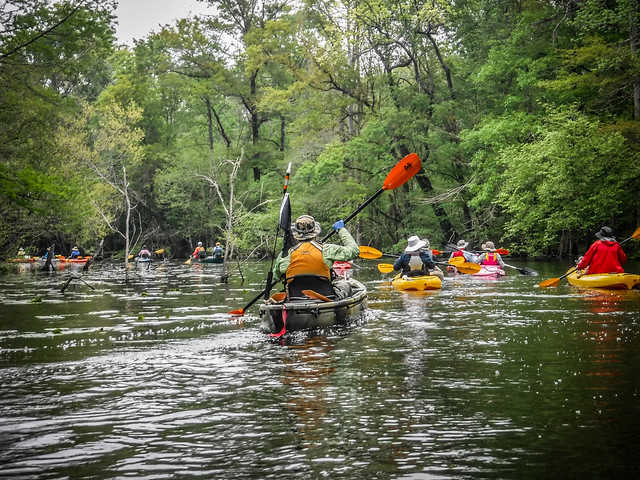 With all of my new activities I just haven’t gotten on the water as much as I would like. When fellow Chorale member Dale Strickland told me about an opportunity to paddle the Edisto River with the Bamberg Chamber of Commerce and the Friends of the Edisto, I jumped at the chance. This past Saturday I met fellow trouble-maker Alan Russell and Dale at Zig Zag Landing, along with over fifty other paddlers.

Zig Zag is a three hour drive from Greenville, so I got up extremely early on Saturday. The drive down was without incident and I arrived in plenty of time to get my boat unloaded. A few others were there, and soon more and more arrived. There were 56 names on the list of paddlers.

Alan arrived, then Dale came with his in-laws. Introductions were made all around and we continued to prep the boats. Other paddlers arrived. The boats (and paddlers) were in all shapes and sizes, from canoes and inflatables to a whole range of kayaks. For this trip I had opted for my Dagger Axis. I had bought it specifically for these types of rivers.

We were each given a numbered poker chip. When we got to the take-out we were supposed to replace the poker chip on the board to indicate that we had completed the trip safely.

Jerry, the event organizer from the Bamberg Chamber of Commerce, called us all together for some last-minute instructions. He warned us that the river was running fast and that there was a possibility of flipping in the one rapid on the river. He held up a bag of Flipper stickers and said that if we had to swim, we got a sticker for our boat. Someone asked what happened if you drowned, and Jerry replied that the sticker could just as easily go on a coffin.

We got into our vehicles and caravanned down to the FRED landing, just above Whetstone Crossroads. There we left our cars and boarded a church bus that took us back to the put-in.

With this many paddlers I was afraid we would be able to walk across the Edisto without getting wet. As it turns out, we were able to get fairly stretched out along the river. Alan and I launched fairly early with a cluster of boats.

I’ve paddled this section of the Edisto River once before with Lowcountry Unfiltered. Today’s water levels were much higher than on that trip seven years ago. Zig Zag Landing is actually off of the main route of the Edisto on an old oxbow. The paddle out to the river was reminiscent of sections of Sparkleberry Swamp.

Out on the main stem the route opened up and the current took off. It wasn’t beyond our abilities, but I could see how it would be pushing it for some. In fact, it did get the better of at least one paddler who was unable to avoid a some brush in the river. I think she will be getting a Flipper sticker.

We were moving very quickly down the river. Fortunately, the huge number of paddlers didn’t descend the river en masse, but spread out. There were some stretches where Alan and I seemed to have to river to ourselves. It was certainly less crowded than some of our infamous “Rope Swing and Beer Commercial” trips on the Edisto, but that’s on a totally different section.

When we were paddling with others it was fun talking to and getting to know our fellow paddlers. There was one woman in her 80’s paddling a short Jackson whitewater rodeo boat. One guy was paddling a rickety old canoe made even more precarious by the presence of an excitable dog.

There were side channels and oxbows available to us that wouldn’t be accessible at lower water. These were neat to explore, but I had to make sure that the swift current wouldn’t push us into an unexpected deadfall. We always managed to find a route through without trouble.

The last time we ran this section the rapid was a fun, tricky little section, but nothing we couldn’t handle. In fact, on that last trip paddle back around the oxbow route so that we could run it again. That second time through I wound up in a bit of brush, but it wasn’t too much of an issue.

Alan and I decided we would do the middle route once again. Our biggest problem was crowding, either running up on someone who got trapped and was blocking the route, or having someone come in on top of us. We hung back and made sure the route was clear before proceeding.

The “rapid” was not. It was just swift water through a narrow channel with a couple of low-hanging limbs. One kayak had a bit of difficulty getting through, so we waited. We had no problem and caught an eddy to watch others come through. One canoe got caught in the fork of a limb, but made it through without spilling.

There was a bit more open water, but before we knew it we were approaching the take out. There was quite a bit of activity at the FRED landing, so we waited our turn to pull out.

While others were pulling up their cars to load boats, Alan and I pulled ours to the side to let the rush pass. Instead, we decided to check out the food options. That meant making a small donation to the Friends of the Edisto, which garnered us a one year membership.

I was pleasantly surprised to see a familiar face, or at least a familiar name. Hugo Kryspin has been named director of the Friends of Edisto and was the one taking memberships. We had never met in person, but have had several online discussions through the Church of the Double Bladed Paddle. There were at least two other members of the Church at this event.

As we enjoyed our meal we watched the other activities associated with today’s event. There was a catfishing competition, and they were bringing in some huge fish.

The days events were over much earlier than a typical Lowcountry trip, so I was back home by early afternoon. With the swift current it was a fast trip. We had covered six miles in less than two hours.

The Bamberg Chamber of Commerce sponsors an Edisto float the first Saturday of each month and different sections of the river. I know I won’t be able to do every one of these, but it does give me another paddling option.