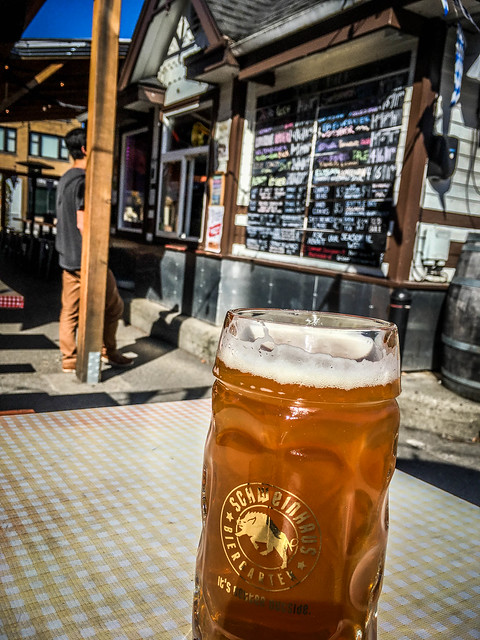 I plugged in the address for Schweinhaus into my GPS, which took me to the incorrect location in downtown Bellingham. I was on the right street, but two blocks away. My phone GPS seems to be more accurate, so I parked and just walked over to the location. It was not what I was expecting, and I had driven right past it.

To say that Schweinhaus is a “restaurant” is a stretch. In reality it’s a converted barista coffee stand. An old food truck pulled up close to the stand serves as a grill and oven. Seating is at picnic tables in a semi-covered outdoor area. Restrooms were porta-potties behind the stand. It was more biergarten and less cafe. 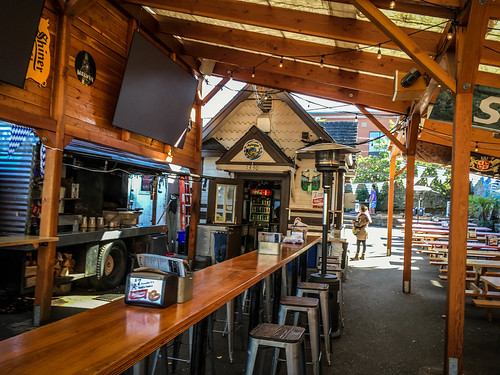 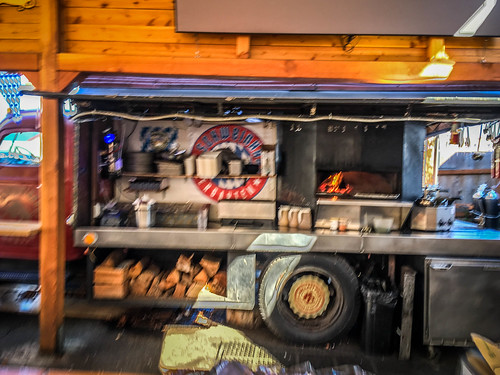 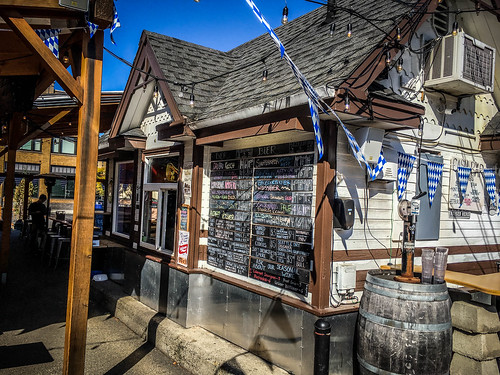 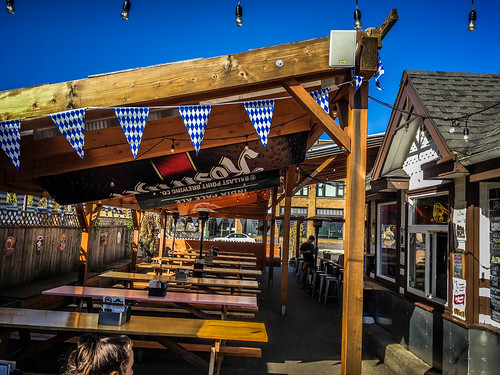 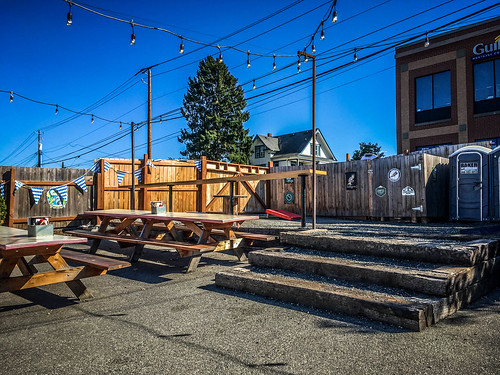 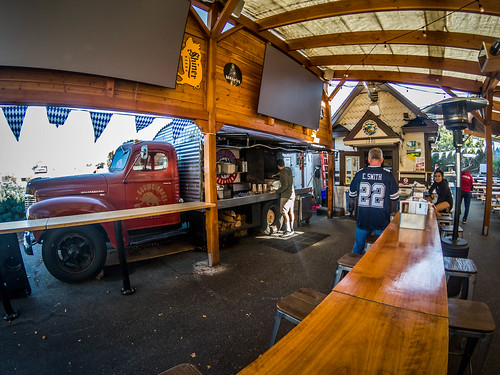 I was here, I was hungry, so I decided to give it a try. You order from the counter and they bring out the food. There were various sausages available as sandwiches, but I opted for one of the two sausage platters so that I could get a good sampling. One platter comes with a large pretzel and the other with oven-roasted potatoes. Both come with sauerkraut. I got bratwurst and weisswurst with the potatoes, washed down with a local IPA. 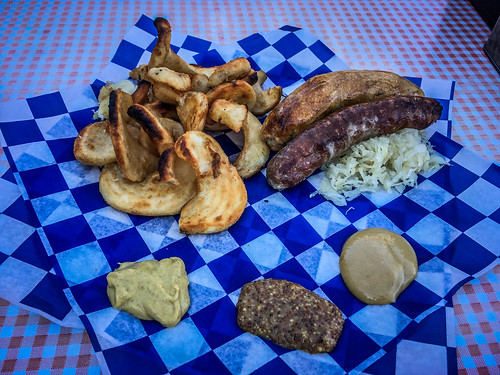 The potatoes were a bit of a surprise. These were more like weird French fries than what I had imagined. They certainly weren’t the German potato salad that I really like. They were OK, but seemed incongruous with the rest of the meal. The sausages and kraut were excellent, especially when accompanied with one of the three mustards provided. It was quite tasty, and very reasonably priced.

As I had my lunch I noticed that this place definitely has a college vibe to it. It’s not far from Western Washington University and several students were there. One young woman ordered a large beer and spread out on one of the tables with textbooks and notes. I’m sure the beer helped with that process.

Schweinhaus would be holding an official Oktoberfest celebration that weekend, so the owners were busy making preparations. A party supply truck arrived for more canopies and tents for the open spaces since it was supposed to rain over the weekend. I decided that before they started that process I’d head on out. 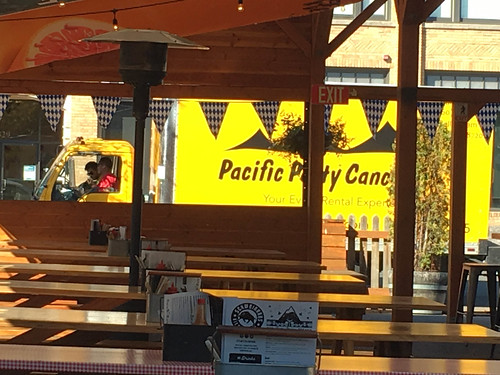 The food was good, but just didn’t quite fit my ideal. Haus Heidelburg in Asheville is hard to beat. Plus, they didn’t have any desserts like Apple Strudel. I’m sure that was better for my waistline.

Having finished as close to a German Oktoberfest as I was going to find this day, I decided to explore Bellingham a bit more. I walked along the streets of the main drag and the feeling of it being a college town hit home even more. I’d thought there might be lots of art galleries and interesting shops like I’d seen in some of the other nearby towns. There were a few, but there were many more bars, restaurants and nightclubs. The restaurants all looked like places that would appeal to college kids. I did take a few photos of the architecture. 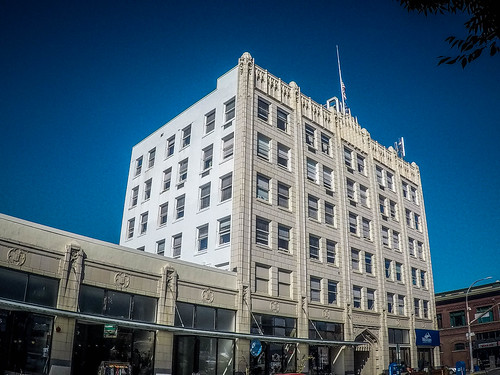 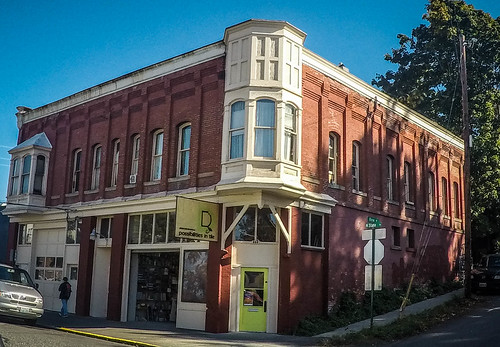 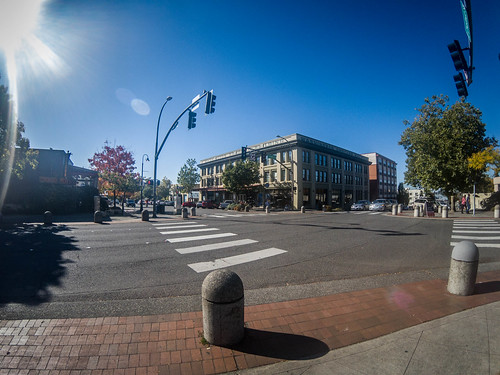 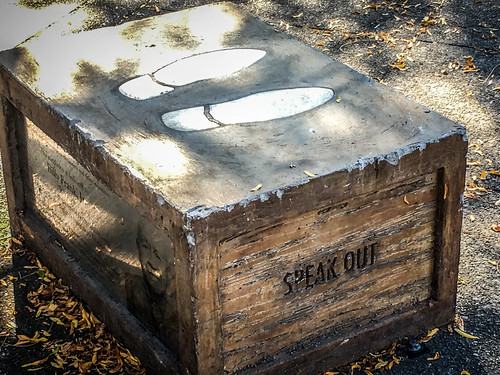 I was afraid I’d run out of time on my parking meter so I walked on back to the car. I drove through the town, along the water front, and past an area that looked like the city center. The old City Hall has been converted to a museum and sits next to an area known as Maritime Park. I decided to explore. I found a place to park but was running out of coins for meters. I could have paid by phone, but I didn’t want the hassle of setting up an account, etc., etc. I chunked in what coins I had and grabbed my camera.

Just behind my parking space was a bridge with a trail staircase leading downward. This brought me to an overlook with a view of Whatcom Creek Falls. The falls were impressive, but suffer from the same problem Greenville had about a decade ago. Greenville removed the Camperdown Way Bridge that blocked the view of Reedy Falls. However, a four-lane bridge still sits atop the falls on Whatcom Creek. 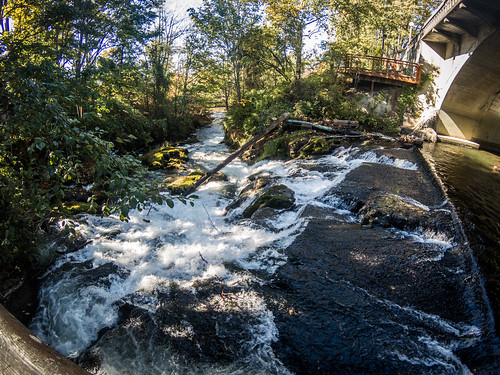 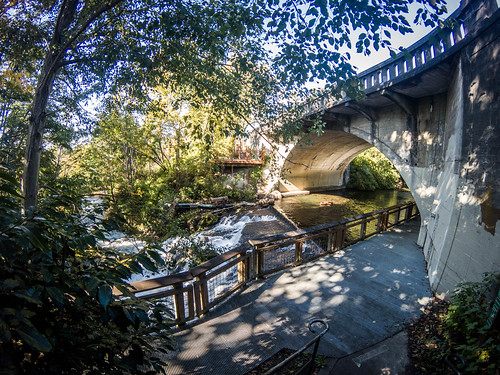 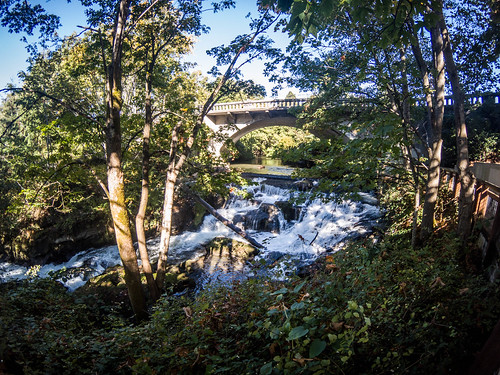 I guess when you’re already a waterfront city having a waterfall isn’t as high a priority as it might be for a place like Greenville. Bellingham has a nice walkway along either side of the creek with a footbridge crossing. Sadly, the park also seems to be the hangout for some of the homeless in the city. 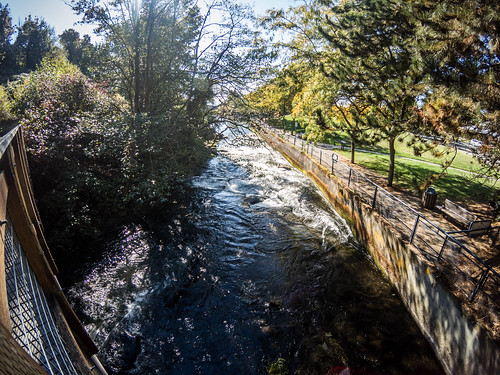 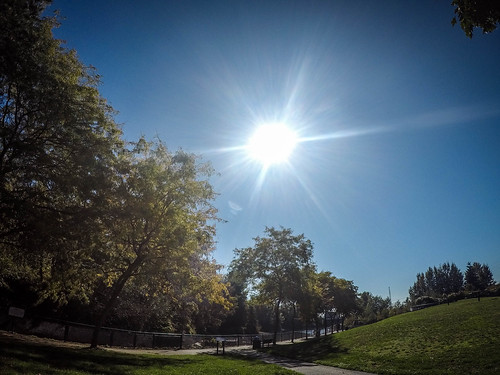 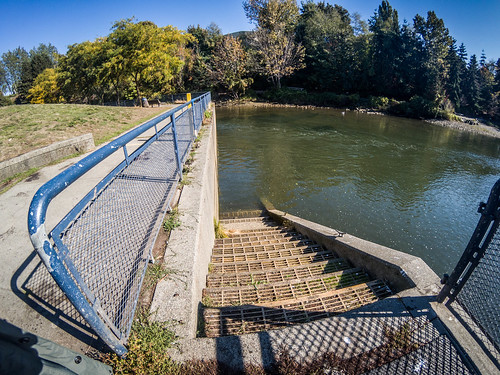 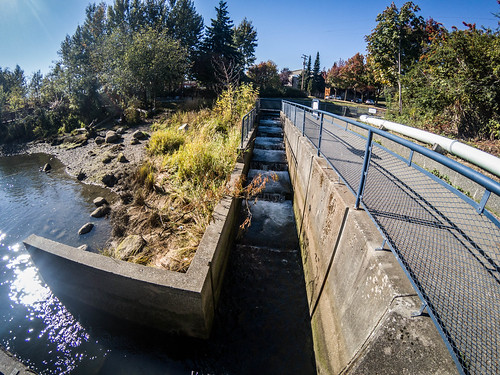 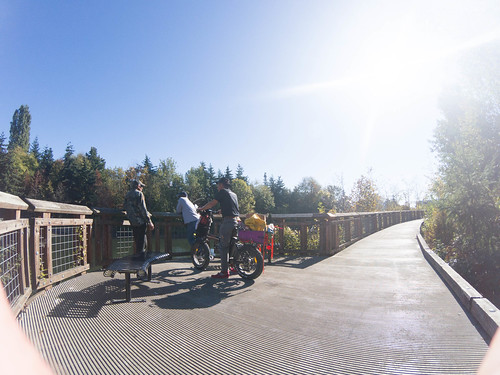 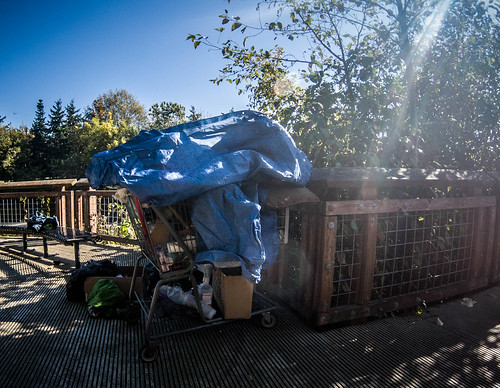 On the south side of the creek the park opens up into a greenspace and garden behind the old City Hall. 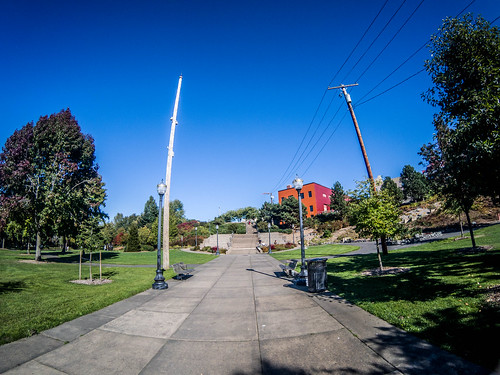 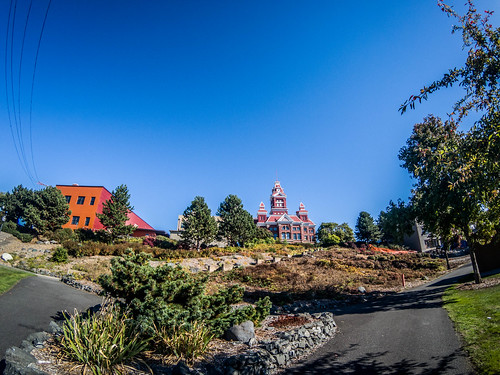 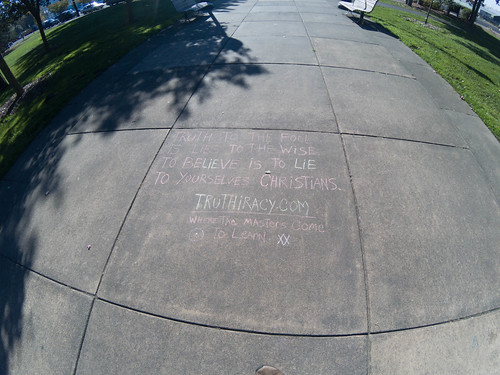 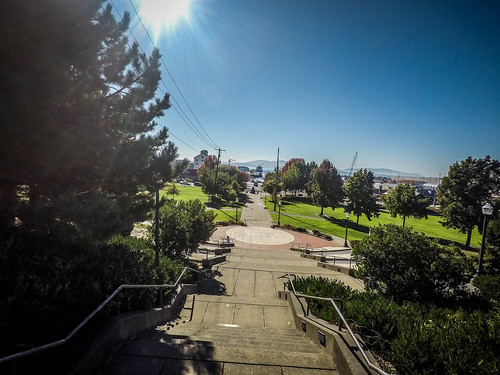 Once again the parking meter situation had me stymied. I would have liked to visit the museum, but I was out of time. That will have to wait for another visit. 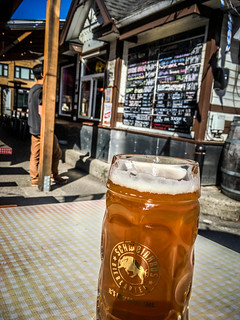 One thought on “Oktoberfest in Bellingham”