A couple of months ago I had an unexpected windfall by selling a large number of photographs. I decided to reinvest that into another hobby – music. I bought two fine instruments at exact opposite ends of the tonal spectrum.

My first purchase was a Killarney Irish Whistle. Scottish piper Skye Richtnfer had recommended it to me when we were taking tin whistle lessons back in March. Not only was it a fine instrument, but I liked the idea because I’d been to Killarney.

I couldn’t find it locally or even online within the US. I had to order it from Killarney then wait for it to be shipped. It arrived last week while we were in Oregon.

I hesitate to call this a “tin” whistle or a “penny” whistle. It’s made of brass and cost considerably more than a penny. It does have a beautiful tone and is so much better than the inexpensive whistles I’ve been playing. I took it to my first Scottish session on Monday and played it almost exclusively. There were no other whistle players or pipers and since there were three other guitarists there, I figured they could get by with one less guitar.

…and on the opposite end of the spectrum, I bought an acoustic bass guitar. I’ve played a bass before, but it was a long, long time ago. Some weeks back someone had post an acoustic bass for sale on Facebook for a fraction of its value. It was snatched up before I could get it. A couple of weeks ago Guitar Center had its beginner Ibanez acoustic bass guitars on sale and I thought about getting one. It was a good thing I held off. I found a used one on Reverb that was like new for a LOT less, and it came with a case. 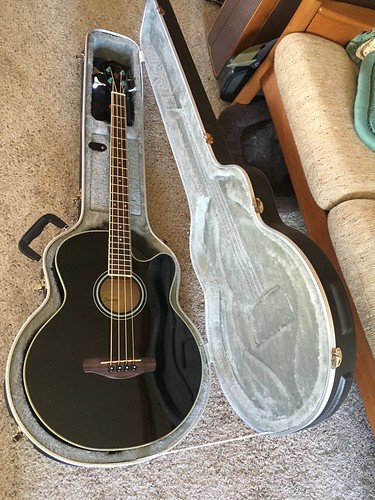 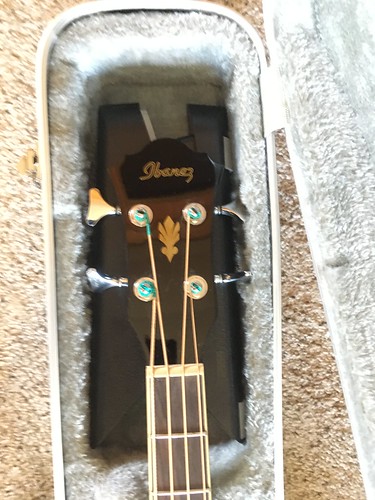 The body is the same size as my Martin, but the neck is much longer. Here they are side-by-side for comparison. 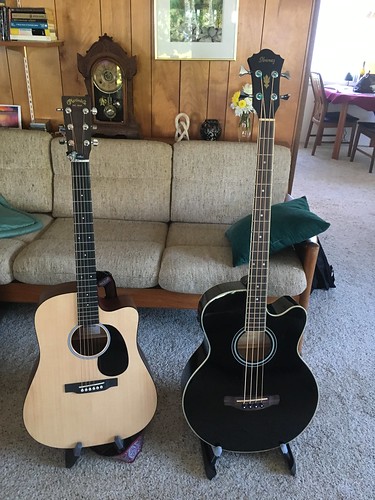 The bass arrived Monday afternoon while I was at my Scottish session. I’ve taken right to it, and it seems easier to play than any of my other stringed instruments. I’ve been able to pick up some common bass riffs and play along with songs as I hear them. I’ve also made a playlist of bass-friendly songs so that I can practice.

Tonight I’m taking the bass to my Bring Your Own Ukulele session at Empire Ale House. I figure since it only has four strings it will fit right in. 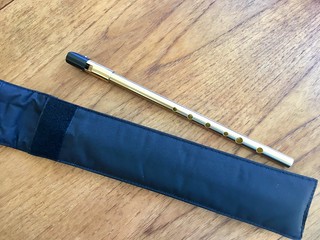