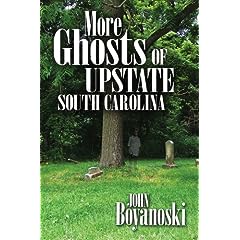 While at the Open Book the other evening I picked up a copy of John Boyanoski’s More Ghosts of Upstate South Carolina. I had enjoyed John’s first book immensely because it was one of the first to focus on hauntings of the Upstate area. Most of the ghost books deal either with the state at large, or focus on the coastal areas. I had even created a Google Earth KML file that maps out the locations in the first book.

While reading Boyanoski’s earlier book, I had made the comment that there didn’t seem to be many modern ghost stories. Most of these tales seem to come from a time at least a century ago. In More Ghosts, Boyanoski has included a few more modern stories. He has also highlighted many more of the lesser-known haunts in the area. Some of these are in private residences, so care is taken to protect the home owners’ identities.

Whether because of the popularity of TV shows like Ghost Hunters, or because it’s hard to find these places without some help, the book makes many more references to local paranormal research groups. There was lots of discussion about orbs, EVP’s, EMF readings, and all the other techno-babble that ghost hunting groups like to use. Personally, I could do without the techno-babble and paranormal research. The “scientific” methods these groups aren’t scientific in the least. Perhaps Boyanoski wanted to inject some air of legitimacy to these stories, but I think they detract from them. To me, these stories work best as tall tales – something to stretch the imagination and make you wander. So, perhaps I’m not as interested in “modern” ghost stories after all.